I’ve been rather bad about reporting on our Family Dinners over the past few months. And not because our menus weren’t delish but somehow amongst the endless events, time slipped by.

December’s dinner menu featured Mexican-inspired fare. We had a variety of fresh salsas, chicharrón, ceviche, salmon-dill tacos, rice, and beans. I whipped up some mango margaritas and my beer braised carnitas. And although it may not have been Latin, our sis, P, made a ridiculously amazing chocolate bread pudding. The icing on the cake? It was our adorable nephew, Leonidas’ 1st birthday!

For January, we let my seester, T, and our niece pick the theme as they’re Jan-Babies. So we were off to the islands for mouthwatering, ono grindz! Our spread included mai tais and my take on hamachi-ponzu shooters. Our eldest seester created a wonderfully light yet fulfilling banana leaf-wrapped monk fish with a curry sauce. And for dessert? Big seester made molten lava chocolate cakes and paired them with my toasted coconut ice cream and guava ice cream.

With island music playing throughout dinner, it was almost—almost like we were in Hawai’i. <le sigh….>

For this month, we revisited Italia. Big seester got me a ravioli mold for Christmas and we were eager to give them a try. For our entrées, we had raviolis three ways: butternut squash with brown butter sage sauce, spicy sausage with a marinara sauce, and lump crab with a pesto sauce. They were quite the success considering it was our first time making raviolis. And because I learned from October’s Family Dinner, I invested in a hand crank pasta machine. Best…idea…ever.

Since I knew it was going to take us some time to get the raviolis to the dinner table, I wanted to make a heartier-than-usual appetizer. We’re a big fan of lamb chops so I turned to my trusted recipe using a ton of rosemary and garlic. By slicing the racks into rib chops while giving them ample time to marinate, the lamb is able to seep in a ton of great flavor. And because my fam loves condiments, I made a quick and herbaceous gremolata to pair with the lamb to help brighten the gamey flavor.

We also found that a light sprinkle of sea salt over the rib chops not only added the perfect seasoning but it also added some great texture. My fam gobbled these appetizers up in no time flat but they can also be served as a mouthwatering entrée.

Can’t wait until next month’s Fam-Din!

In a small bowl, mix together the rosemary, garlic, lemon zest, red chili flakes and olive oil. Place the lamb rib chops in a large shallow dish or gallon sized resealable bags. Season the lamb well with kosher salt and black pepper. Pour the herb mixture over the lamb and turn the chops around to coat well. Cover and refrigerate for 6-8 hours (I like mine to marinate overnight).

Prepare gremolata by adding parsley, basil, garlic, lemon juice, and red pepper flakes into a food processor. Pulse to combine. On low, stream in the olive oil until you reach a smooth consistency. Season with salt and pepper.

Serve the lamb rib chops with a sprinkle of sea salt over the top (optional) and gremolata. 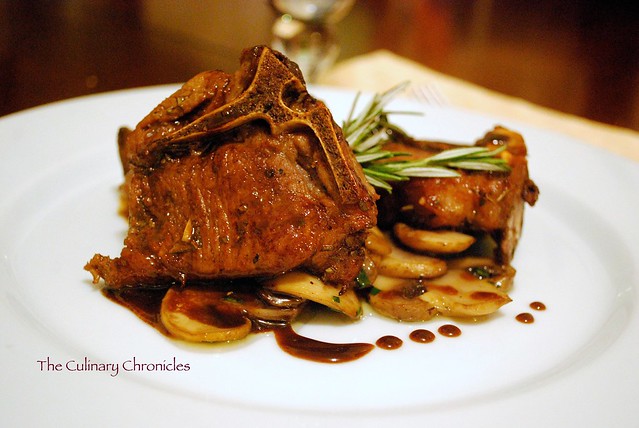 Quite often, we would head to the Hedley Club Lounge in the Hotel De Anza to check out their live jazz. A cozy venue with a Mediterranean decor, the Hedley Club Lounge offers a great wine list with delicious small plates to choose from. And of their tasty tidbits to nosh on, we always ordered their Lamb Chops with crispy Polenta Cakes. The lamb is prepared with a sweet yet savory balsamic reduction and is absolutely delicious.

So in my attempt to pay an homage to the Hedley Club Lounge and the happy times we had there, I offer my interpretation of their Balsamic Glazed Lamb Chops. True, the dish isn’t exact but it does play with the lovely flavor balance of acidity and sweetness.

And you know what they always say……….Imitation is the highest form of flattery 🙂

Generously season lamb with salt and pepper. In a bowl, whisk together balsamic vinegar, orange juice, rosemary, garlic, shallots, mustard, and agave nectar. Pour marinade into a resealable bag and add lamb. Seal bag and refrigerate for a minimum of 2 hours.

Remove lamb from the refrigerator at least 15 minutes before cooking to take the chill off. Take lamb from marinade and strain the liquid into a small sauce pan. Bring the liquid to a boil and then reduce heat to low. Continue reducing until thickened—about 10-15 minutes.

Dry off the lamb to eliminate any excess moisture. Heat ovenproof skillet (or grill pan) to medium high and add olive oil. Sear lamb on each side for 2-3 minutes until golden brown. Brush glaze on the chops and place in oven at 400 degrees. Roast until the internal temperature reaches 145-150°F (for medium). Remove from oven and let rest for 5 minutes. Plate lamb with an additional drizzle of the glaze. Serve with your choice of sides.

For some time now, Rack of Lamb has been the bf’s and my “go-to” entrée when company come over for dinner. Perhaps because it’s SUPER easy to make or because it sounds “fancy” when you announce to your guests that you’ve prepared lamb, we absolutely love whipping them up. ☺

In the past we’ve prepared them in the traditional style of crushed garlic and rosemary. However, after catching one of Tyler Florence’s episodes on the Food Network, we were inspired how he used porcini mushrooms to create a crust for his Roasted Leg of Lamb. So, we decided to take a spin off of it and apply the same philosophy to a rack of lamb.

End result? DELICIOUS! The earthy tones of the porcini mushrooms pairs so well with the lamb. Instant hit! Pair it with your choice of sides (we love serving it with mushroom risotto or couscous would be tasty too!) and a deep, bold red wine and this will be your Go-To Entrée all year long!

Take lamb and trim off any excess fat. Rinse under cool water and pat dry with paper towels.

In a spice grinder or small food processor, grind the porcini mushrooms into a powder consistency. Rub 1 tablespoon of olive oil over the lamb and liberally season with salt and pepper. Roll lamb in the porcini powder, gently pressing to adhere.

Heat remaining oil in a large heavy grill pan over moderately high heat. Sear the rack on each side until golden brown, about 2-3 minutes per side. Transfer rack to the oven and roast until the internal temperature reaches 145-150°F (for medium), approximately 5-7 minutes. Remove from oven and let rest for 10 minutes. Slice chops between bones and drizzle with remaining pan juices. Enjoy with side dish of choice.