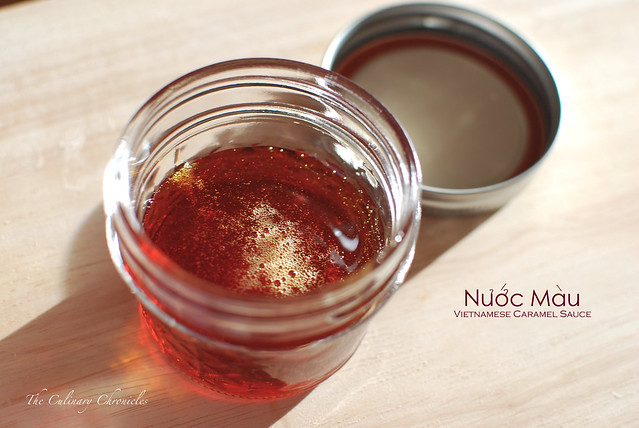 Nước Màu is a “caramel sauce” commonly used in Vietnamese dishes. It offers a sweet, bitter balance to salty, savory ingredients and is often used in braised dishes with pork, shrimp and fish.

You can find a prepackaged version of nước màu dừa in the condiment/sauces section of your local Asian grocery store but why buy it when it’s so easy to whip up at home? Plus, it’s cheaper to make and you know exactly what’s in it. No funky mystery items that can often pop up in pre-bottled stuff.

Nước Màu is typically quite dark in color but I prefer to make my version a bit lighter than others as I find it can be a bit too bitter for my taste. But you can cook down the sugar to whichever consistency you prefer.

Once made, you can jar up the nước màu and store until you get a hankering for some down home Vietnamese dishes.

Place the sugar in a heavy bottom sauce pan and cook over medium heat. Once the sugar begins to melt, swirl the pan around as it begins to bubble. Continue cooking the sugar until it reaches a dark brown hue.

Carefully pour in the boiling water. The melted sugar will violently bubble and hiss at this point so take caution. Stir the liquids and cook for an additional 4-5 minutes as it continues to thicken. Pour the nước màu into a jar and allow to cool to room temperature. The nước màu can be kept for several months, unrefrigerated.

I am a sucker for Bread Pudding.

There’s something so darn comforting and mouthwatering about a bowl full of this goodness. Rich, sweet–almost sinful.

With Autumn finally coming around, it was the perfect time to make an apple version highlighting the warm spices of cinnamon and nutmeg. And the only thing to take it over the top was a decadent drizzle of Caramel flavored by good ol’ Bourbon.

Inspired by my visit with the great o’hana of King’s Hawaiian, I used the slightly sweet Original Hawaiian Sweet Round Bread for the pudding. I also cut back on the amount of sugar in the custard base since the final dessert would be sweet enough from the luscious Caramel Bourbon sauce.

But the awesomeness doesn’t stop here! One of our lucky readers has the chance to win a cornucopia of goodness courtesy of our friends from King’s Hawaiian!

For extra chances to win, leave a separate comment for each indicating which of the below you did:

Due to shipping challenges, this Giveaway is limited to those in the continental United States. Sorry! 🙂

The deadline to enter is Monday, October 8th at 5pm (PST) and the winner will be announced the next day.

In a heavy bottomed saucepan, dissolve the sugar and water over medium-high heat. Once the liquids begin to bubble, swirl the saucepan around and continue cooking until it reaches an amber color. Reduce the heat to low and whisk in the cubes of butter one at a time until fully incorporated. Remove from heat and whisk in the heavy cream. (The liquids will bubble up so be careful!) Stir in the Bourbon and a few pinches of sea salt (optional). Set aside.

Preheat oven to 350 degrees F and thoroughly butter the bottom and sides of an 8×8 inch pan.

In a large bowl, whisk together the first 8 ingredients of the bread pudding. Add in the cubed bread and apples making sure that they have been coated by the custard mixture. Let set for 5 minutes to allow the bread to absorb some of the custard. Pour the entire contents into the greased pan and spread evenly. Take a few spoonfuls of the Caramel Bourbon Sauce and drizzle on the top. Bake the Bread Pudding in the preheated oven for approximately 35-40 minutes until the custard has set and the top is golden brown. Remove from the oven and allow to slightly cool before cutting. Serve warm with additional sauce drizzled on top and fresh whipped cream.