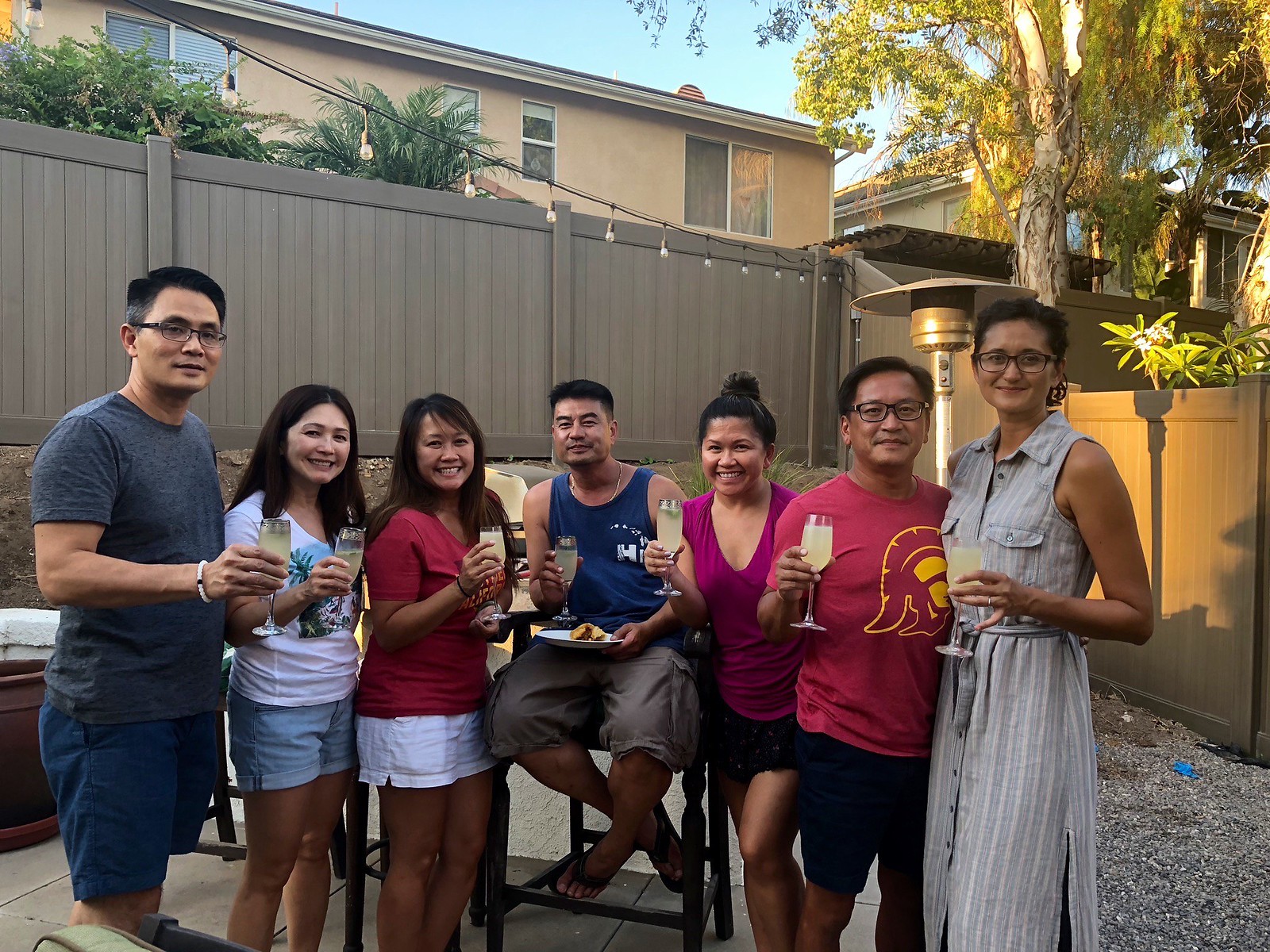 T and her clan had an adventurous getaway to Costa Rica where they zip-lined through the jungles, went on night hikes, encountered monkeys and sloths, stayed in tree houses, frolicked on beaches and indulged in wonderful meals. As I was stalking their vacay via IG, I saw that they kept hashtagging their photos with the “Pura Vida” phrase. Although it translates to “pure life”, I’m told that it’s a indicative Costa Rican phrase that can mean anything from “this is living”, “carefree life” and also as salutations.

Needless to say, they were still buzzing with the “pura vida” bug when they came home and convinced us to take a Costa Rican spin with our Family Dinner menu. The rest of us had never been but we were game to give it a spin! 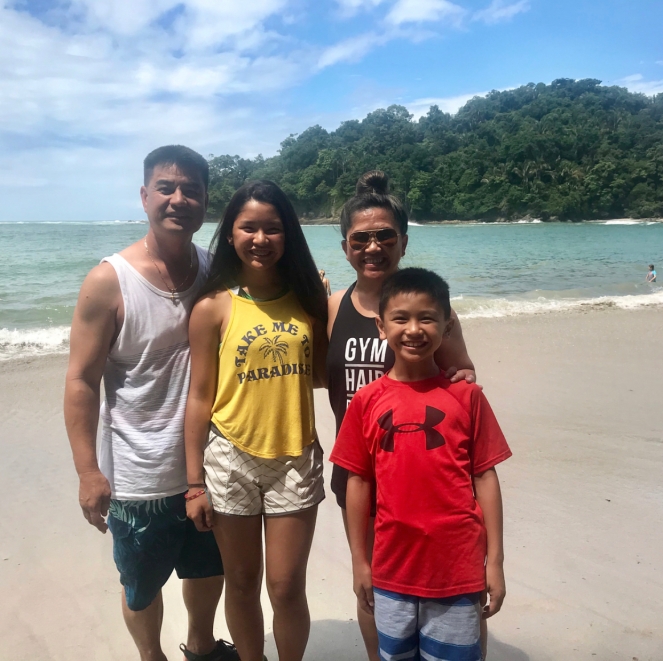 And it all started with Cocktail Hour!

Inspired by a cocktail T had on vacay, she mixed cilantro-cucumber infused vodka with ginger simple syrup, lime juice and ginger beer. It was delish! Really bright and unexpected – something akin to a mix of a Mojito meets Moscow Mule. 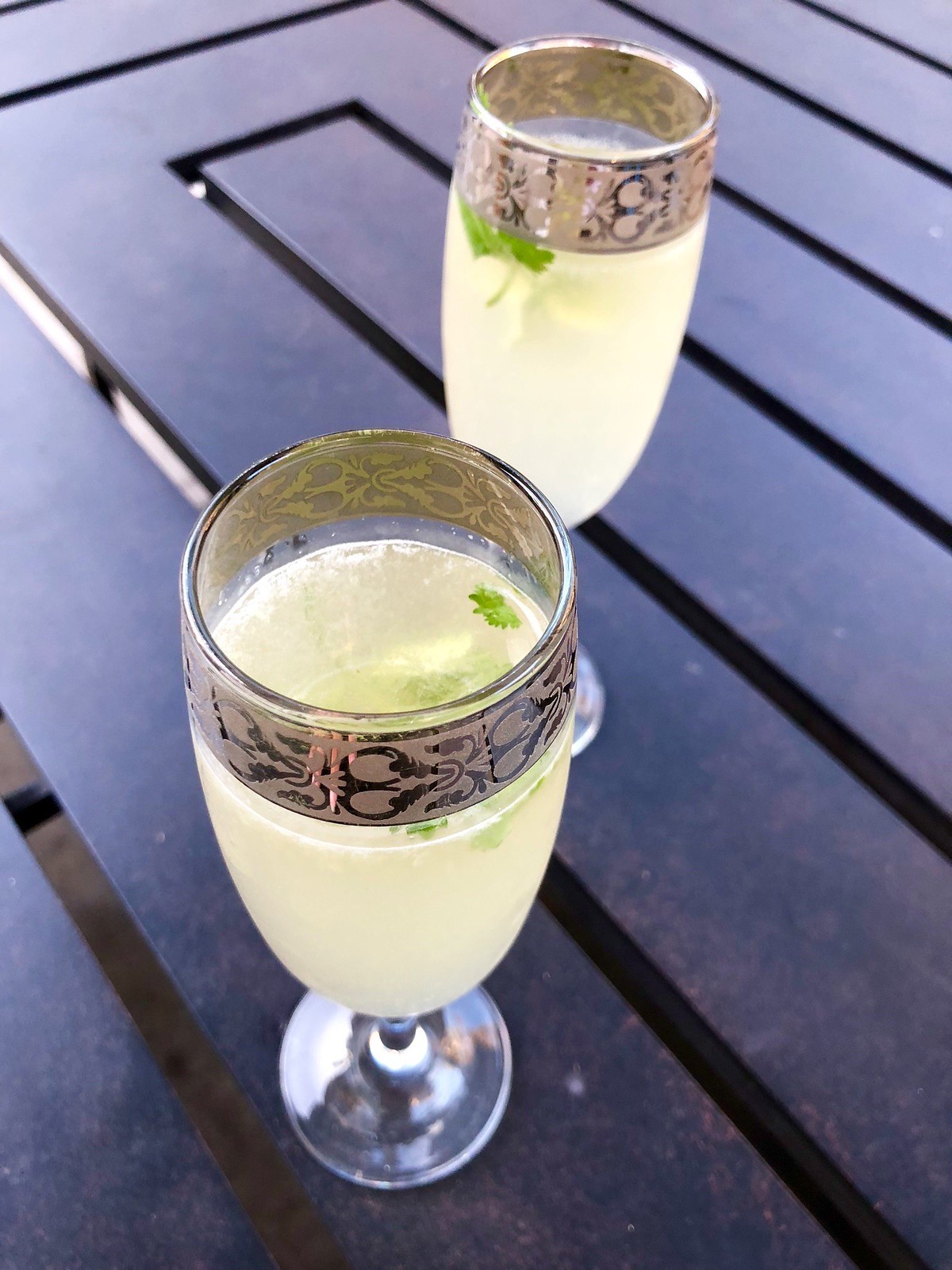 She couldn’t remember the name of it so I’m just going to call it the Pura Vida Cocktail for now. 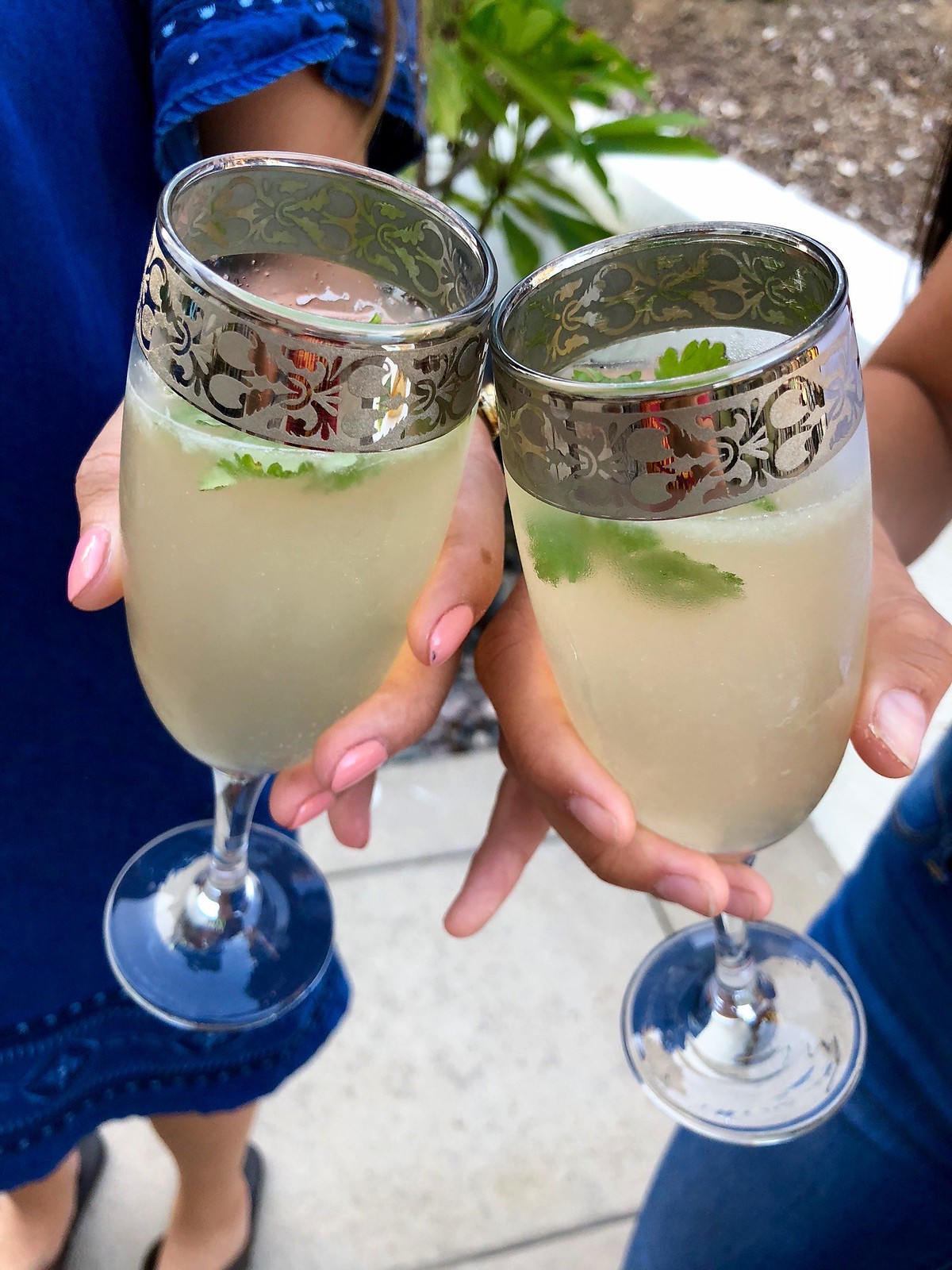 Or as I refer to them–the Dudes! 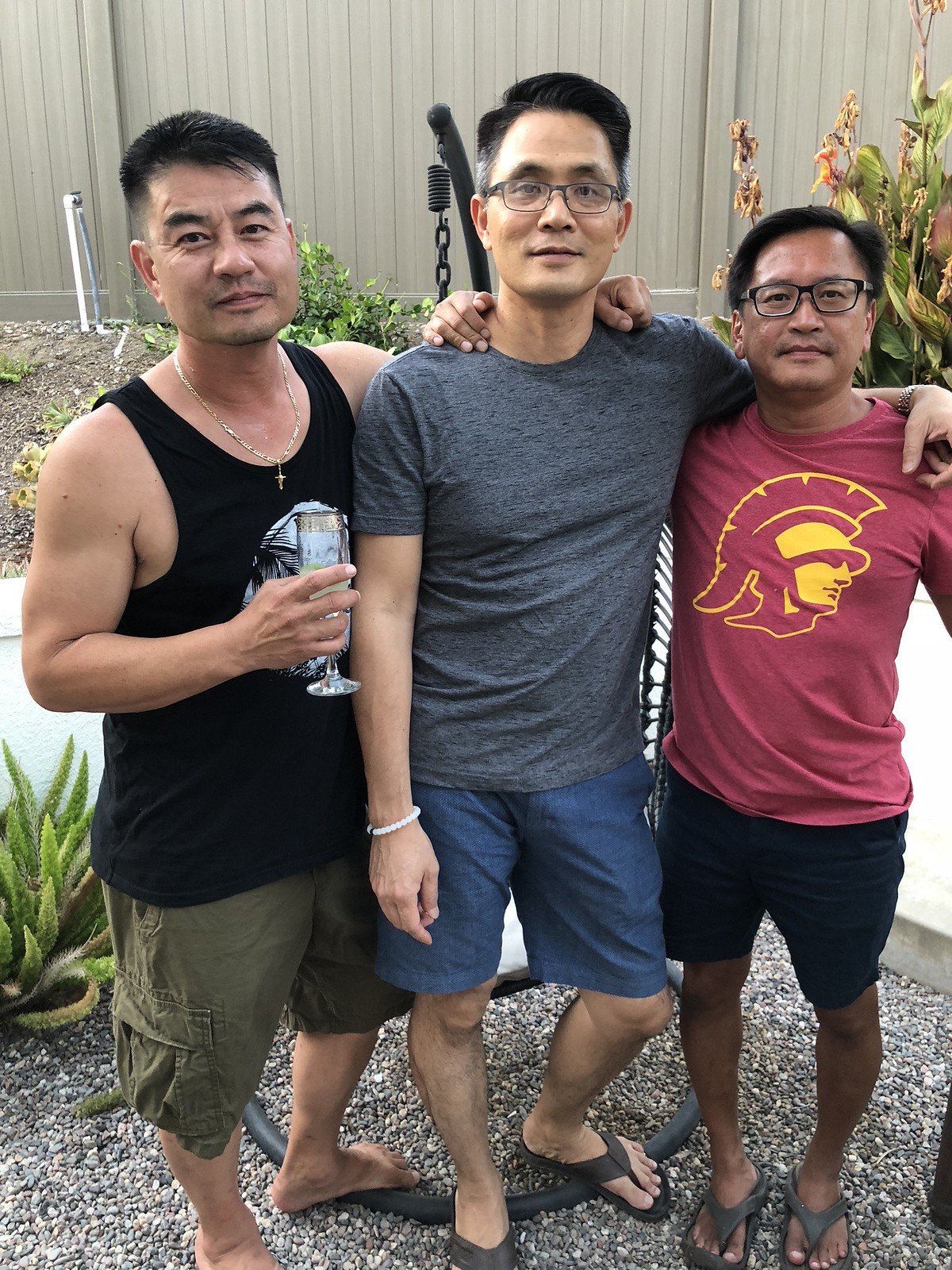 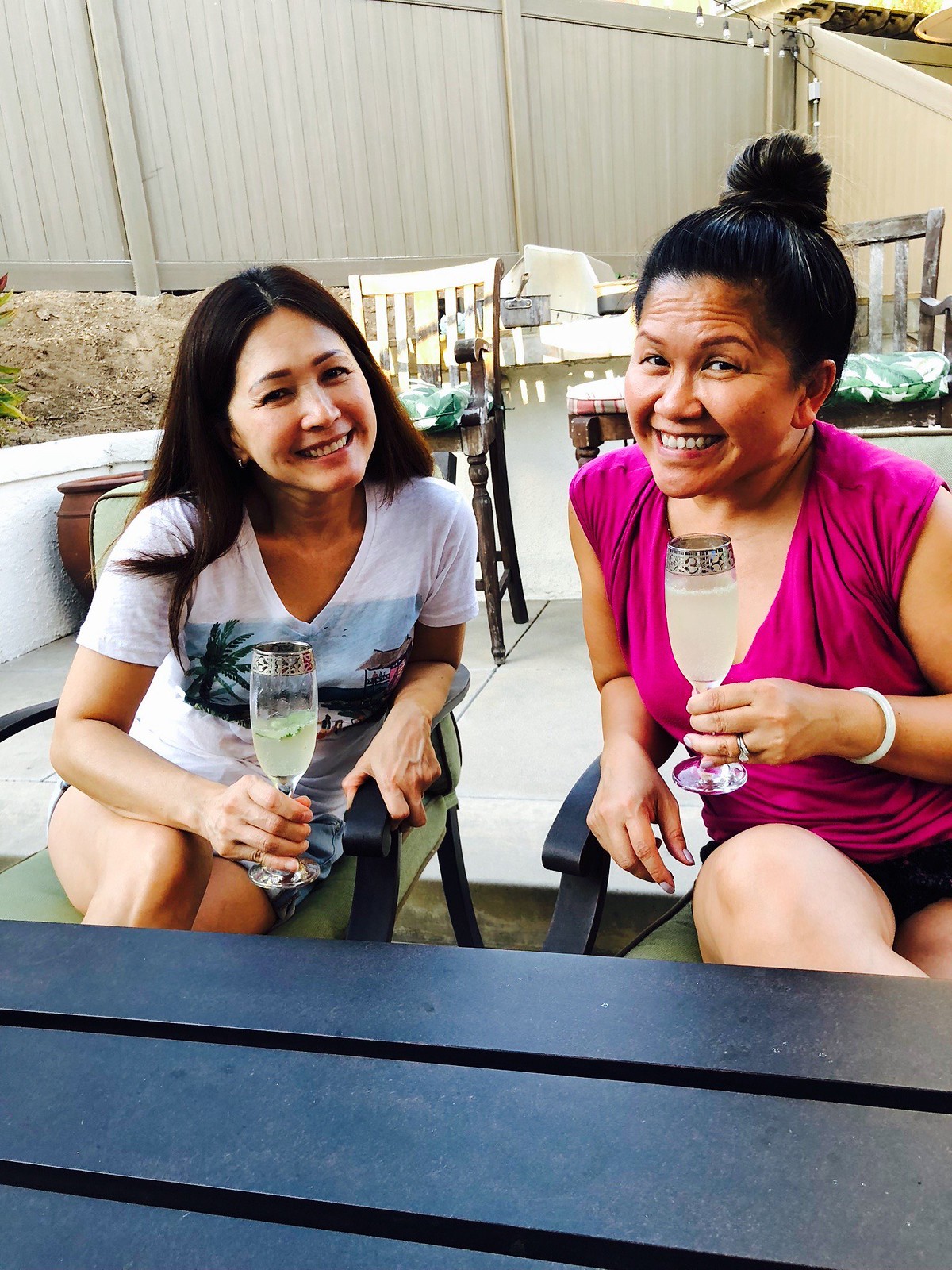 And then we looked over and saw Nina like this.

Which meant one thing…we needed to get going on the appetizers or the munchkins would all become hypoglycemic and either pass out or get super grumptastic.

And that, Friends, is NEVER a pretty picture. 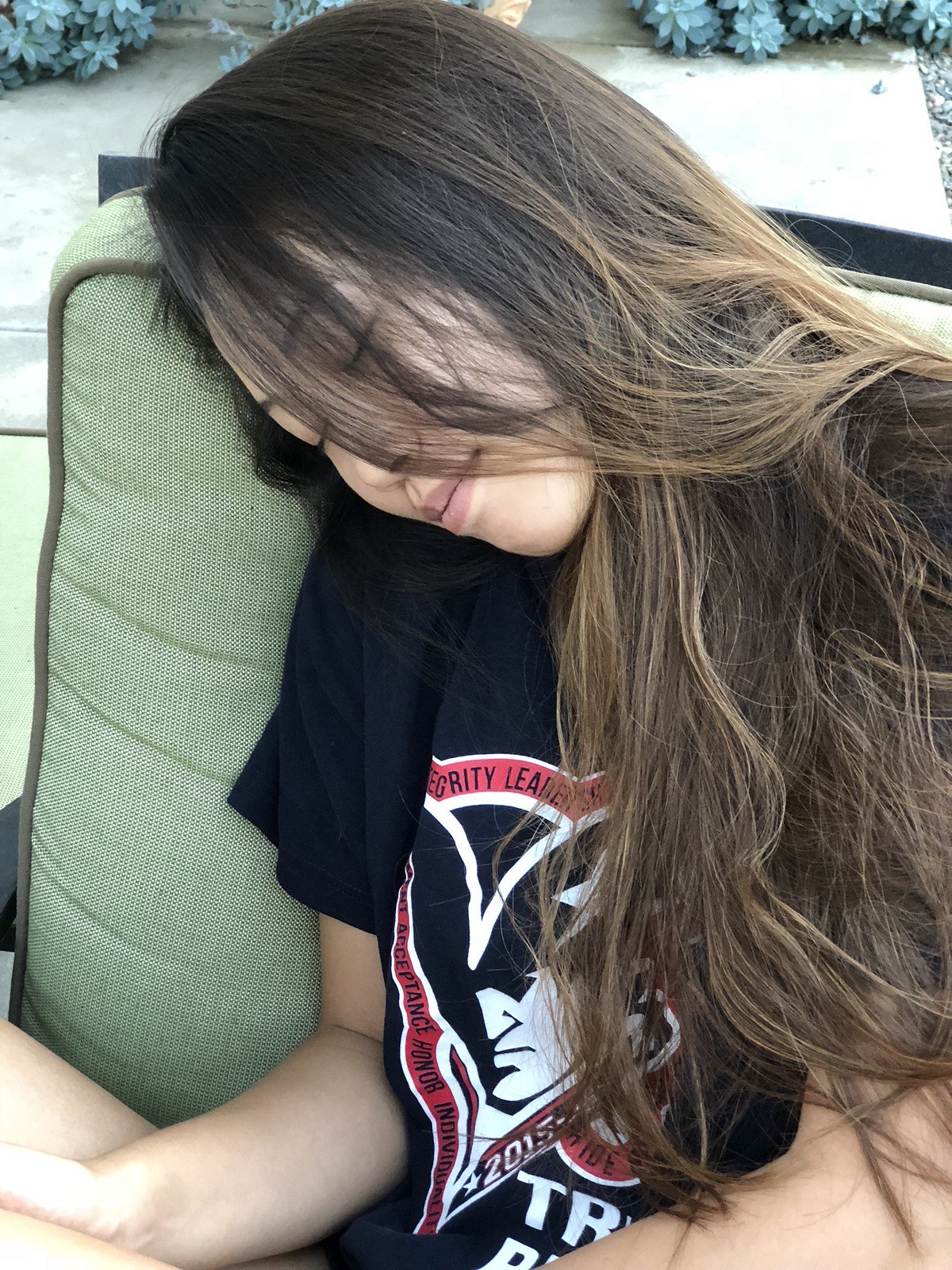 N took the lead on the first appetizer – her take on Chorizo Empanadas. 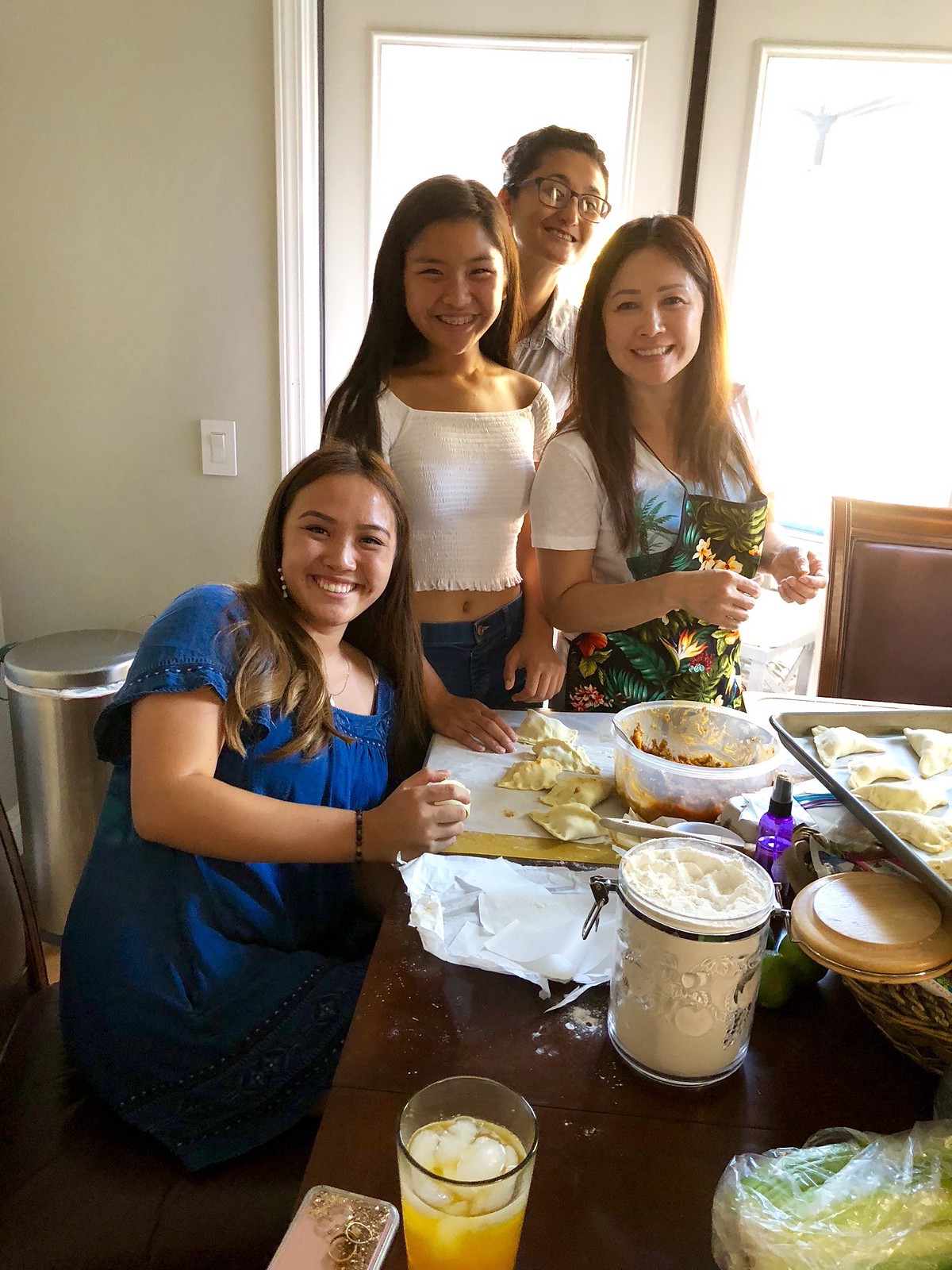 She’s made variations of empanadas before but what made these different than her previous versions was that the filling also included cubed potatoes and boiled eggs. 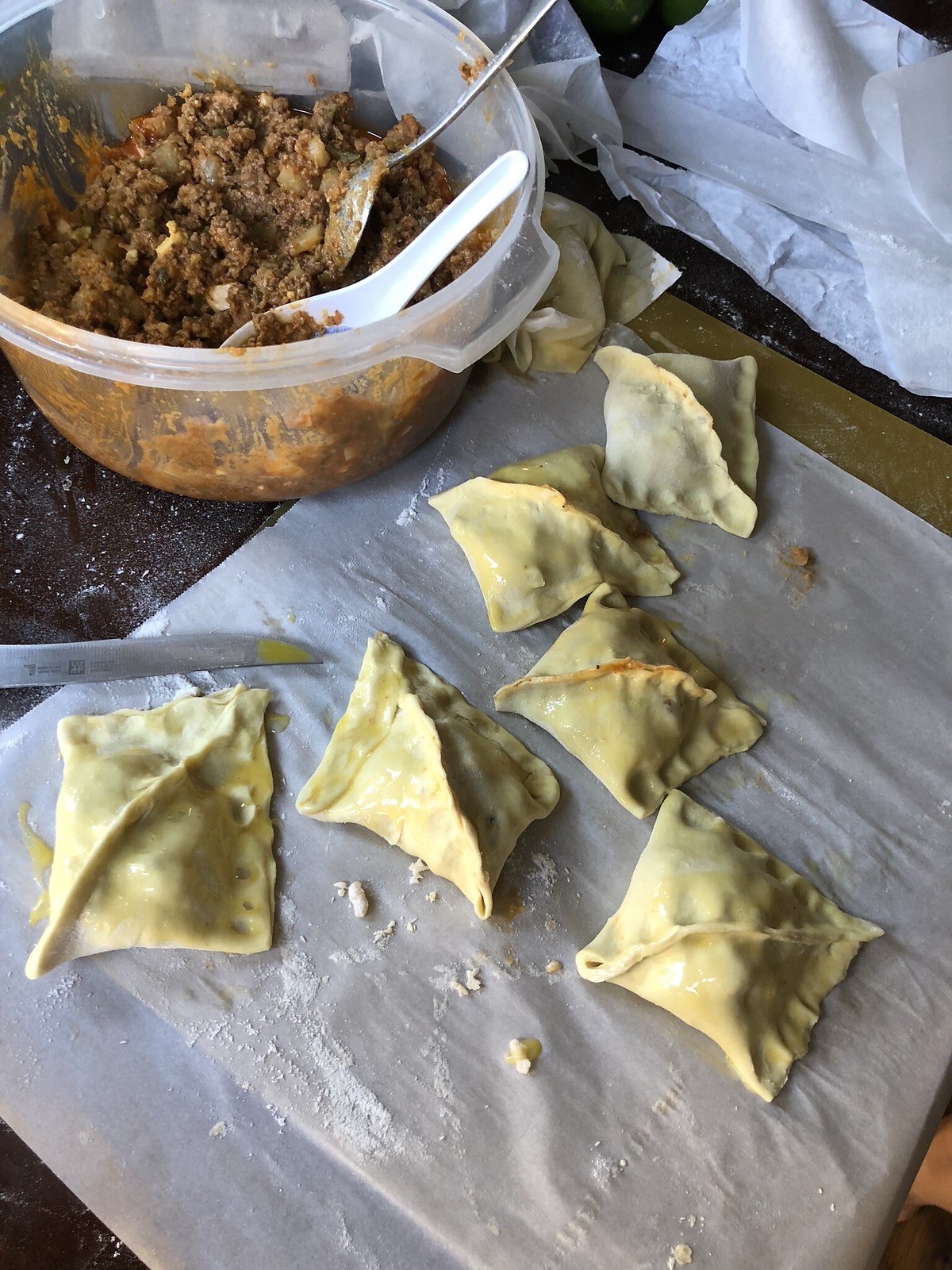 They were so bomb!

Instead of a masa dough, she used puff pastry so the exterior was so buttery and flaky while the filling was rich and deeply spiced. And of course, we had to have some chimichurri sauce to dunk them in. 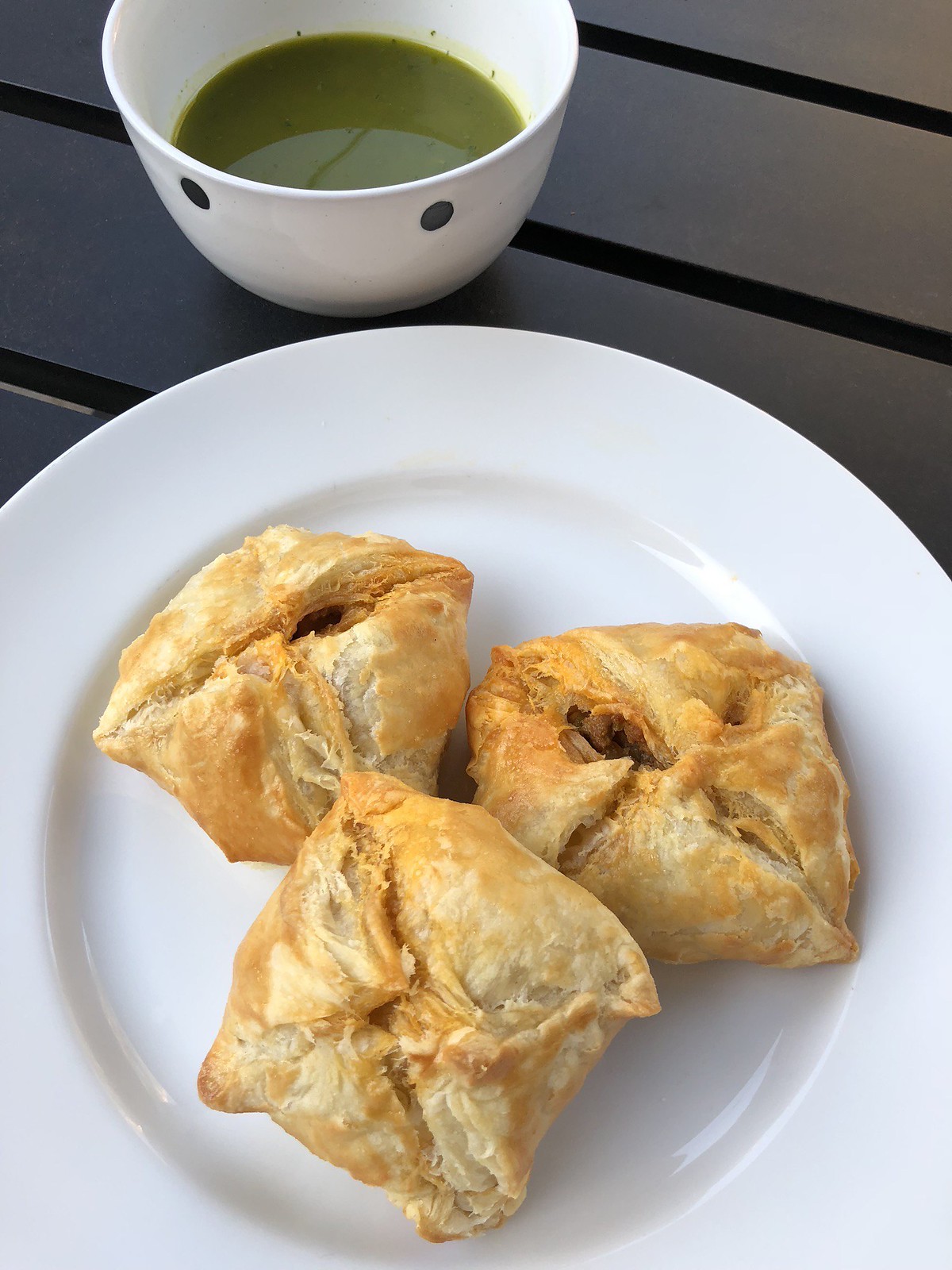 Actually, I’m pretty much a sucker for savory hand pies from ALL cultures. 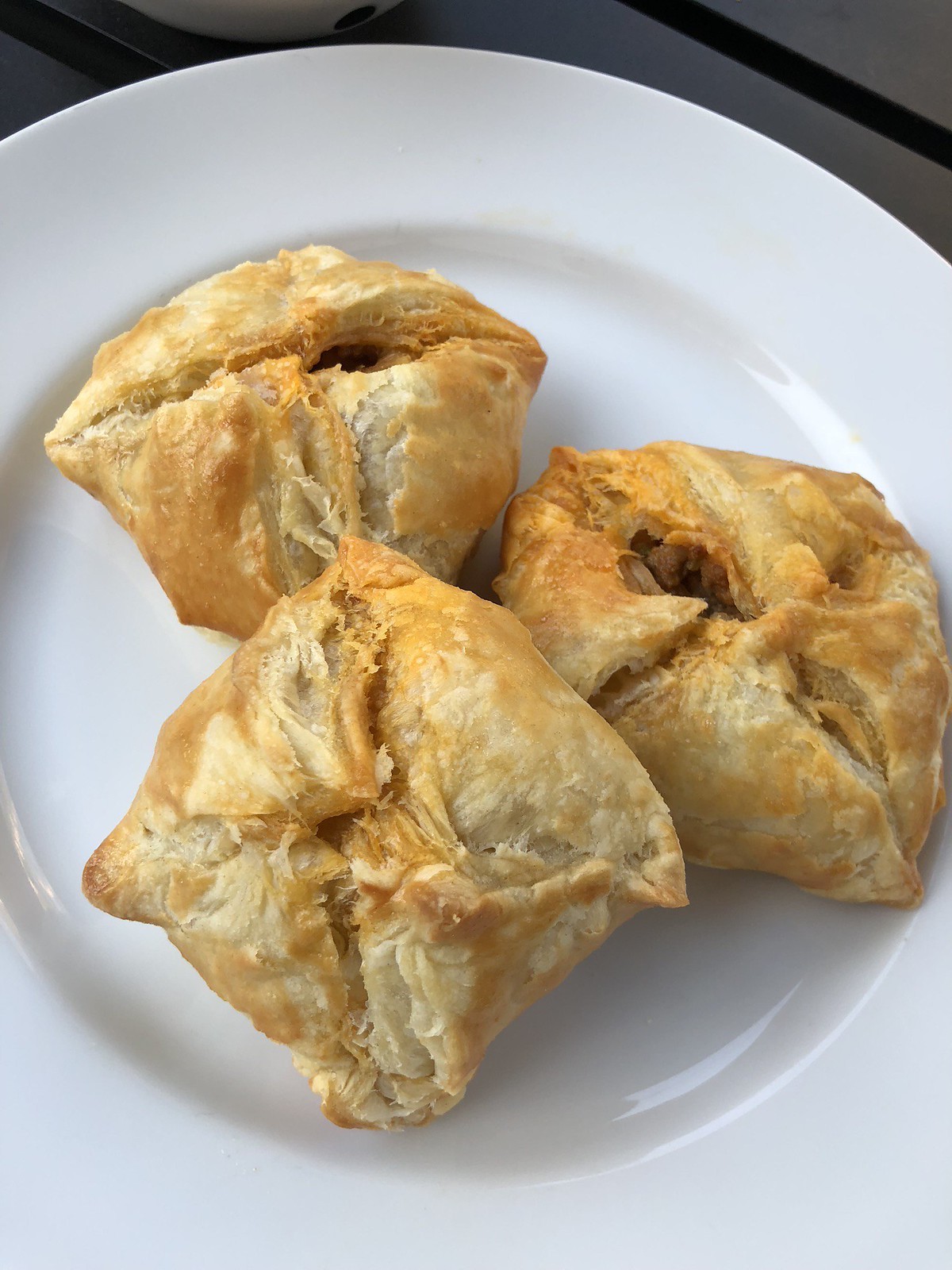 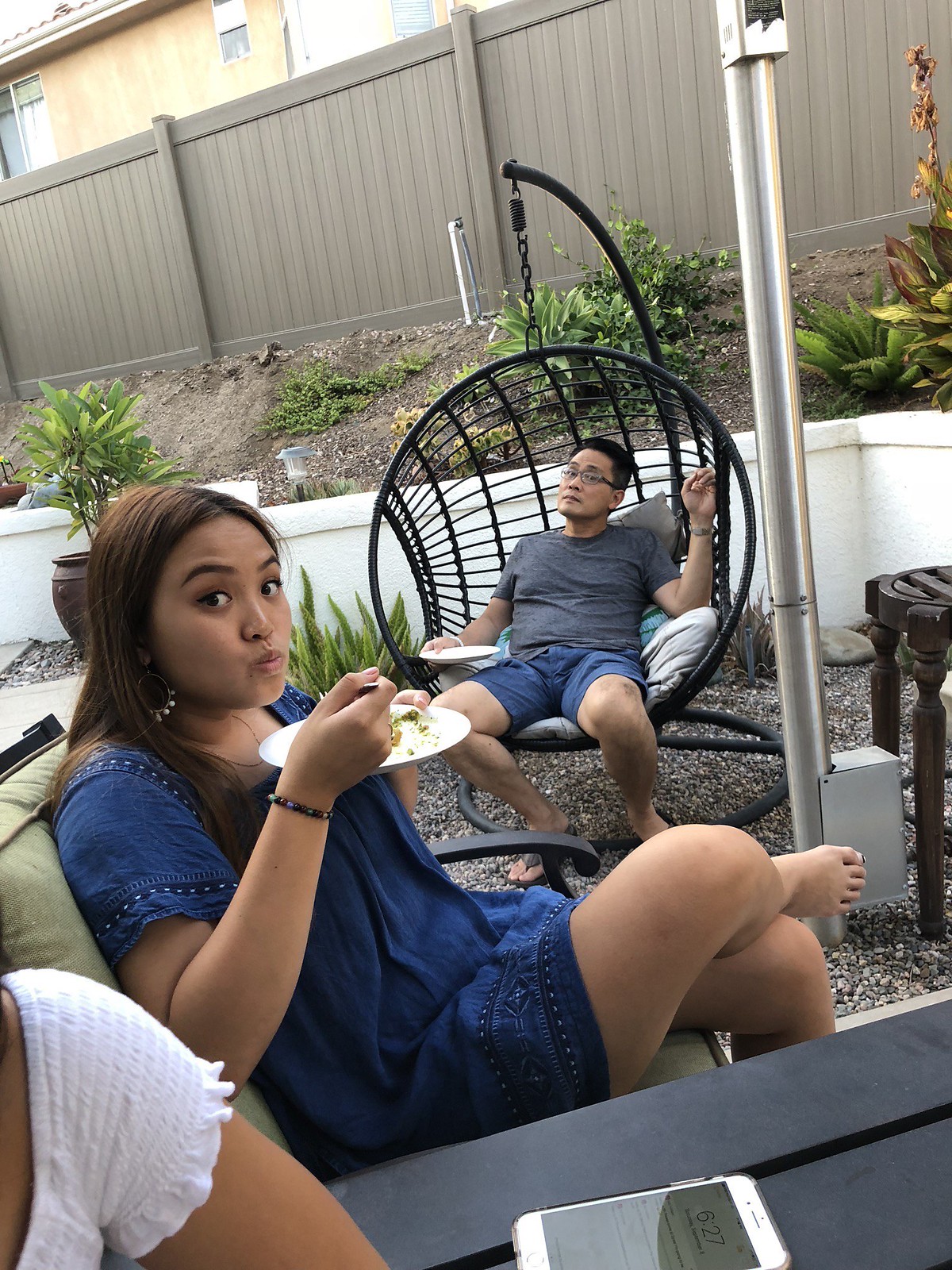 While in Costa Rica, T said the ceviche dishes were some of her favorite bites. One day, R and Lucas even went deep sea fishing and caught a sailfish, dorado and a yellowfin tuna. They brought their haul back to the hotel restaurant where the kitchen fixed them up a feast that included mahi mahi ceviche. 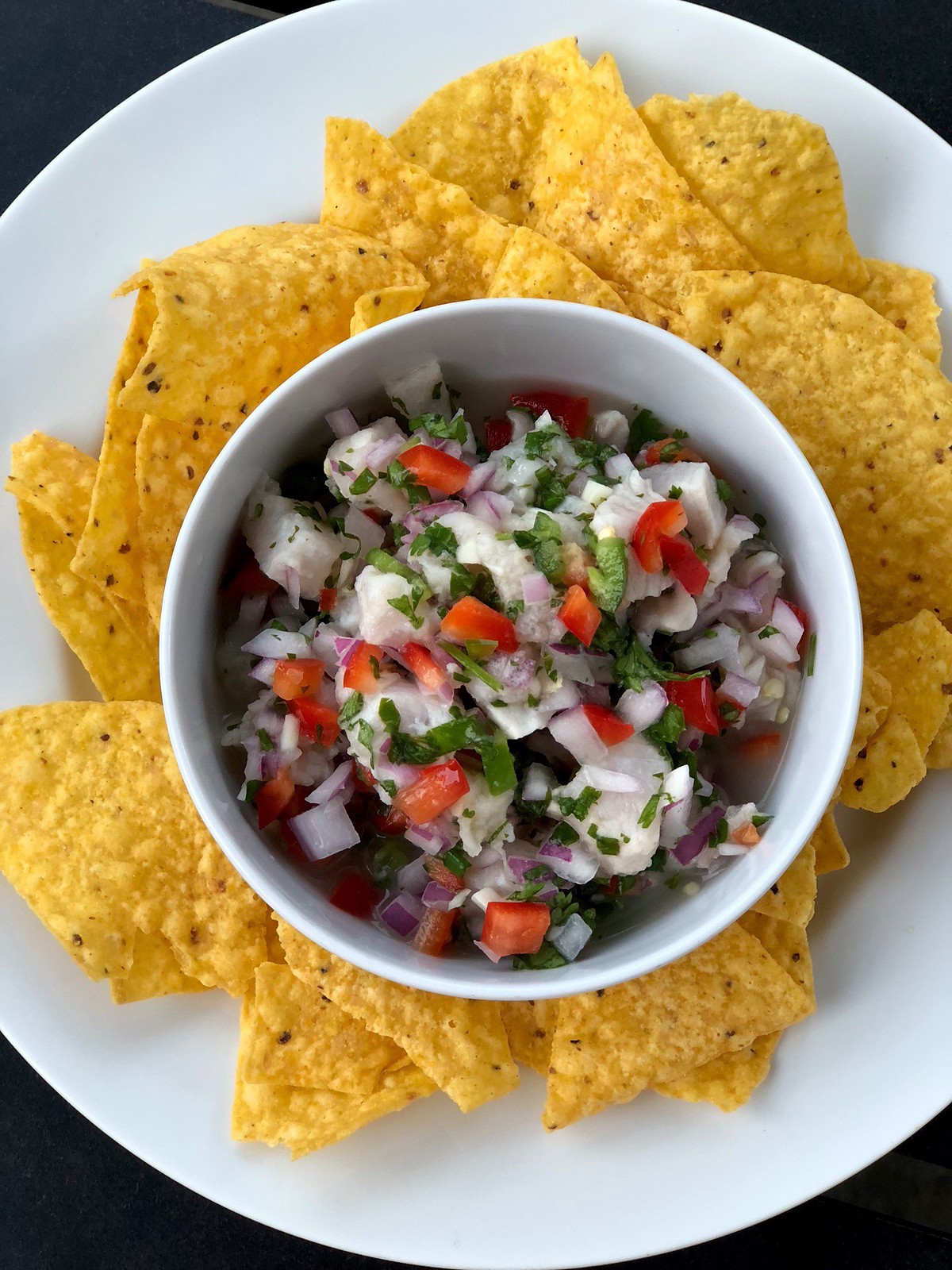 With that still fresh on her mind, T decided to whip up a big ol’ bowl of bright Ceviche and served them with Tortilla Chips. 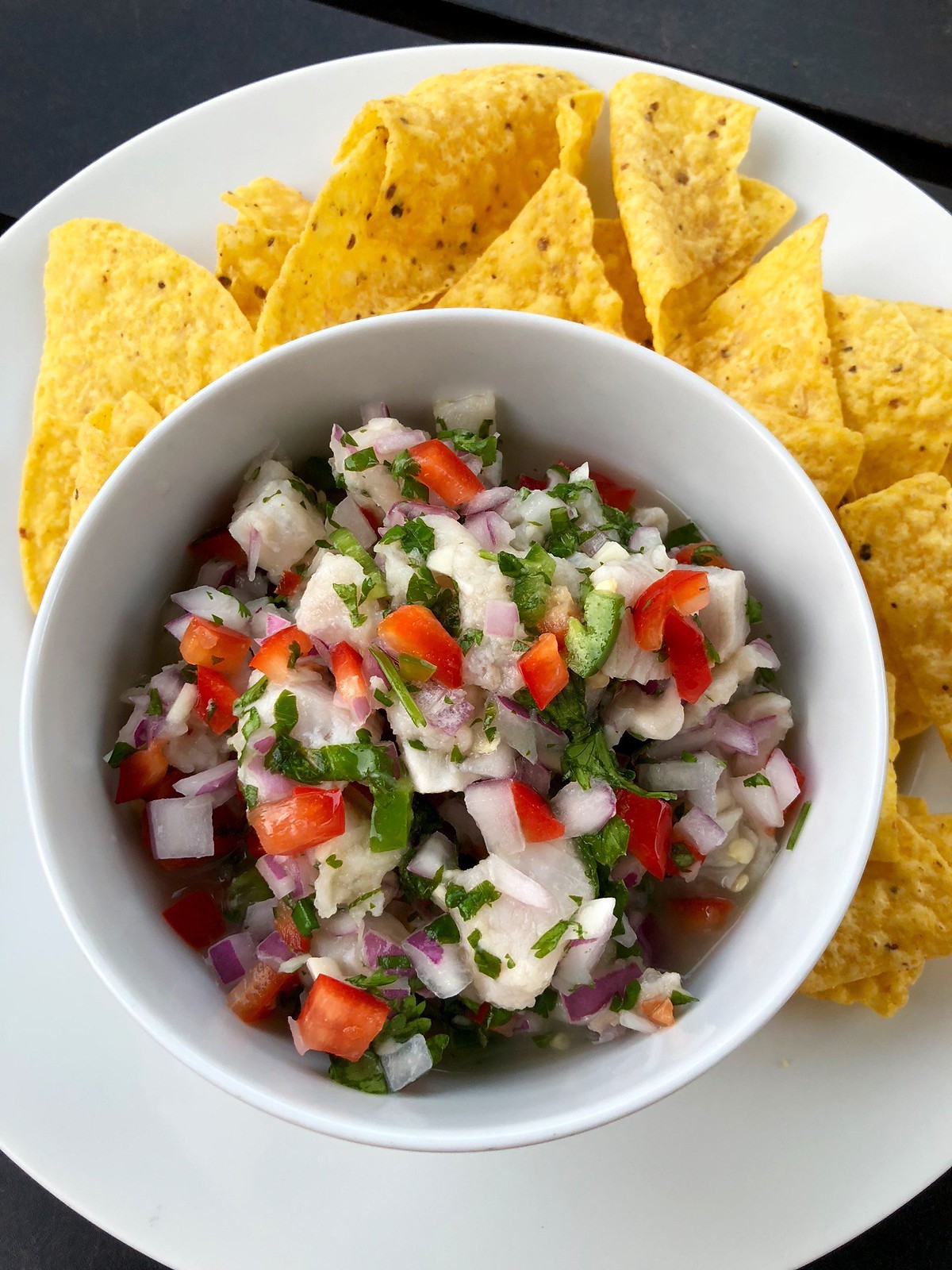 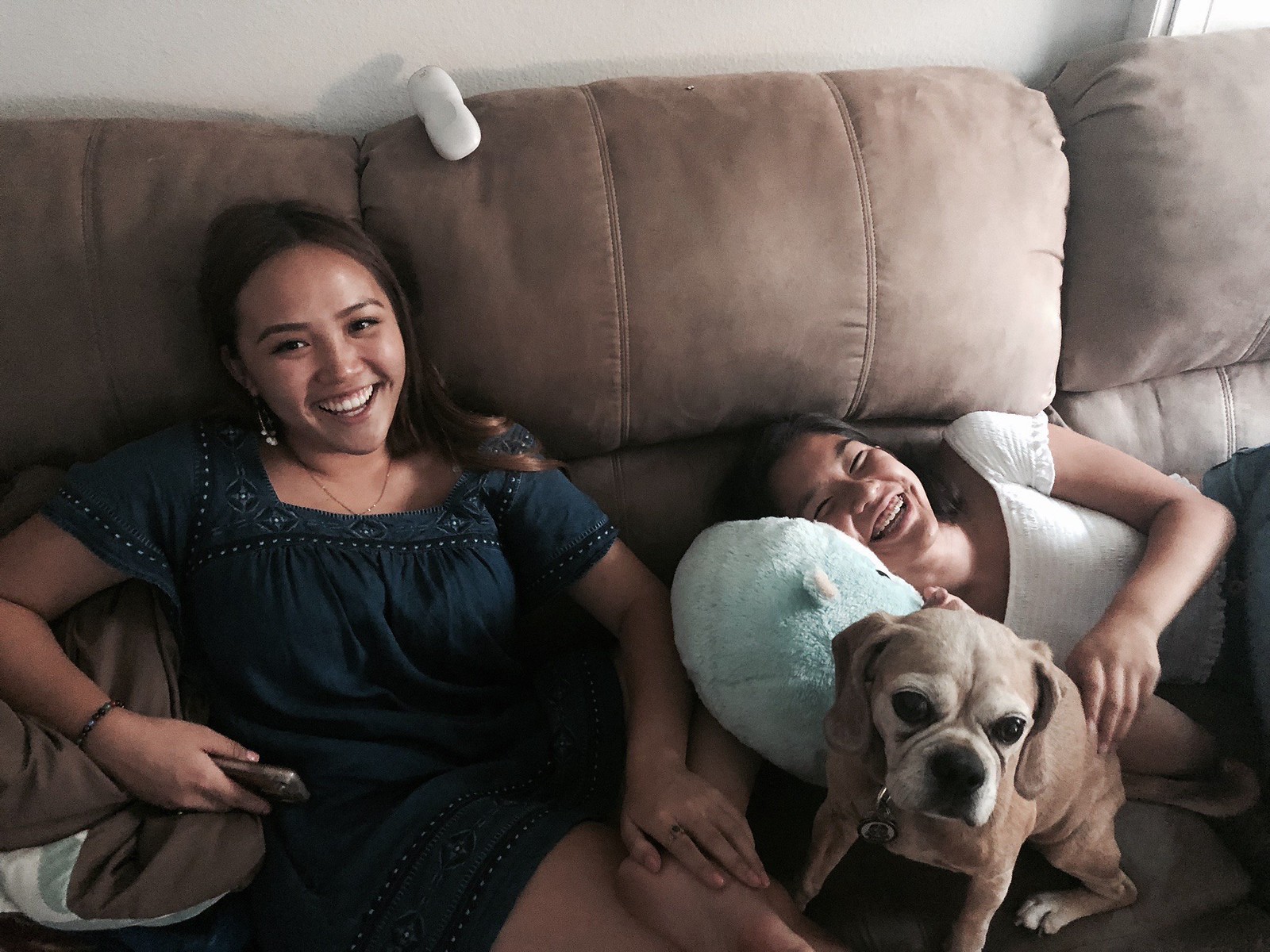 Oh…and we all fight over this egg chair…..it’s the best. 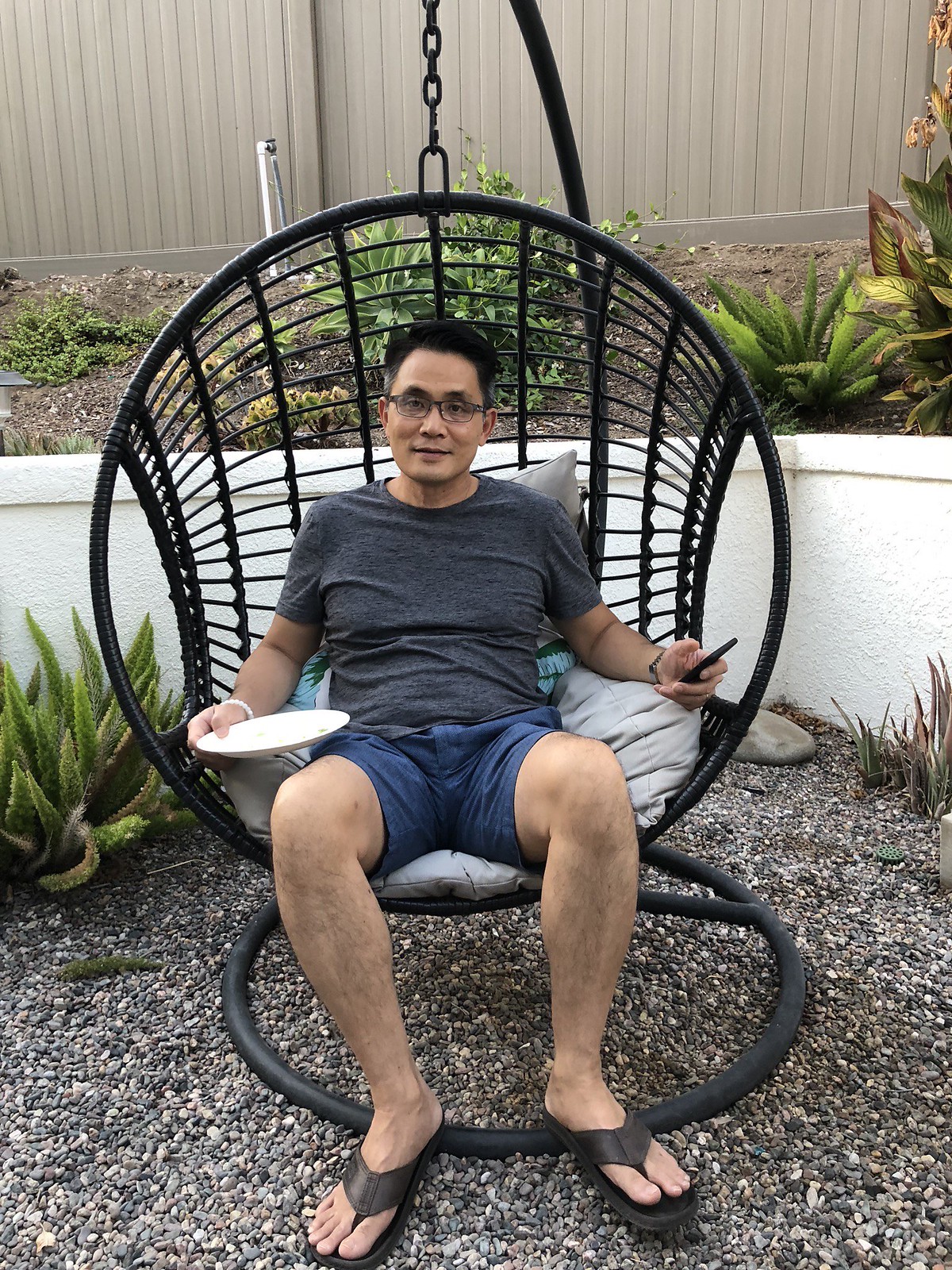 Told ya she needed food. 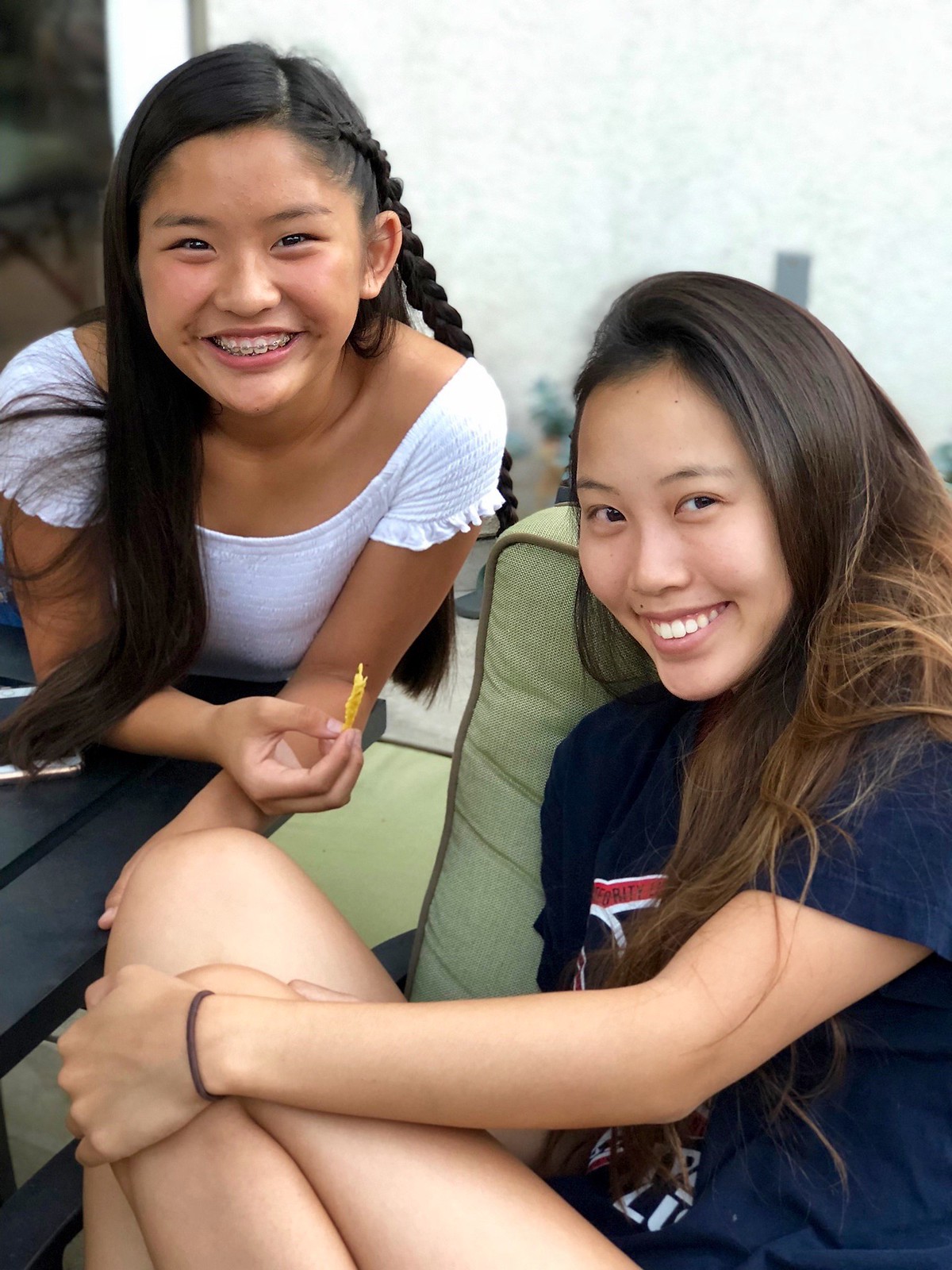 It was around this time that Brother started prep on his and L’s dish.

I should’ve snapped a pic once he finished mincing the garlic because V is quite meticulous (like Nini!) with his prep and his knife cuts are super consistent. 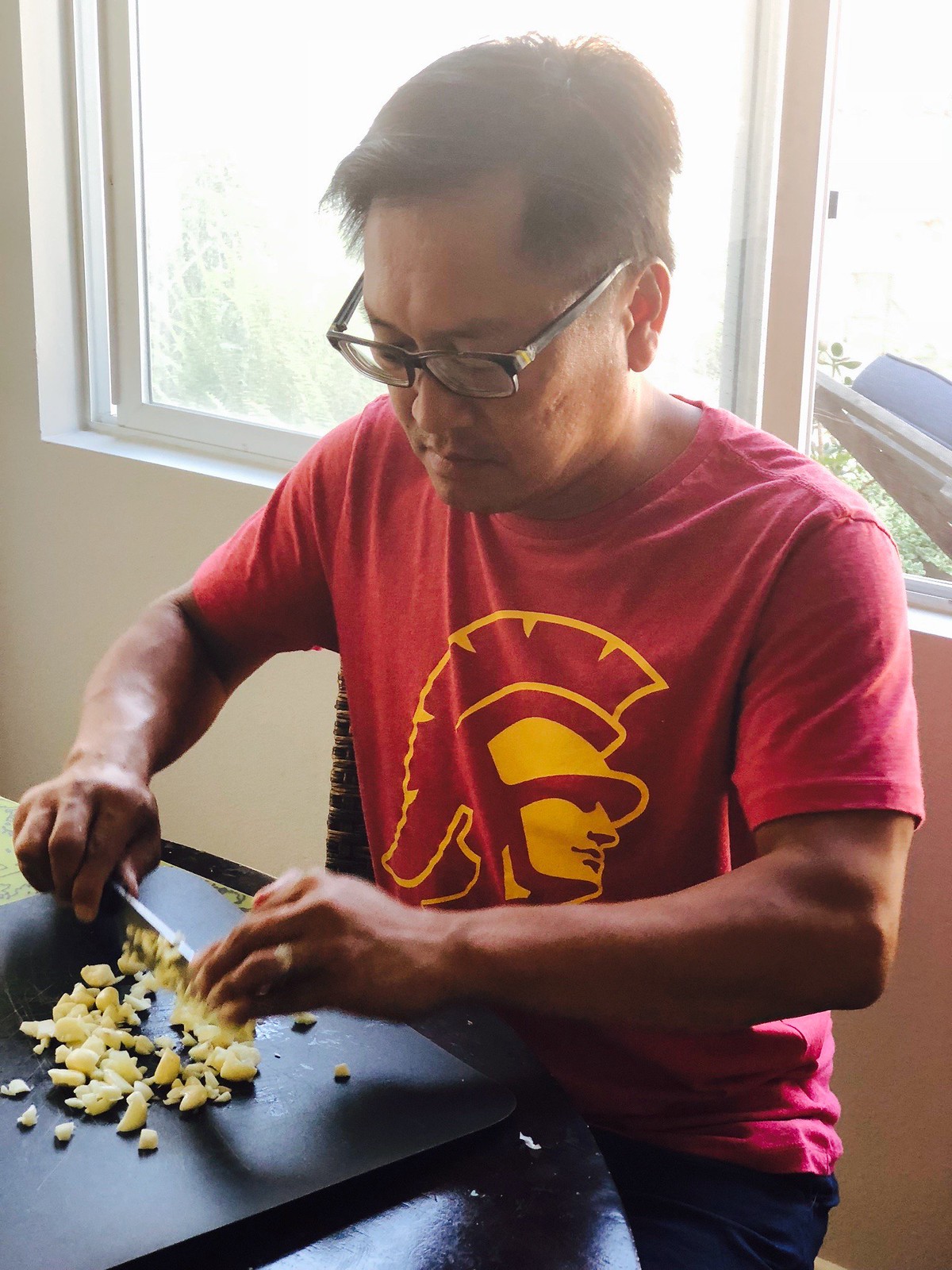 And here’s L rockin’ out with the black bass! 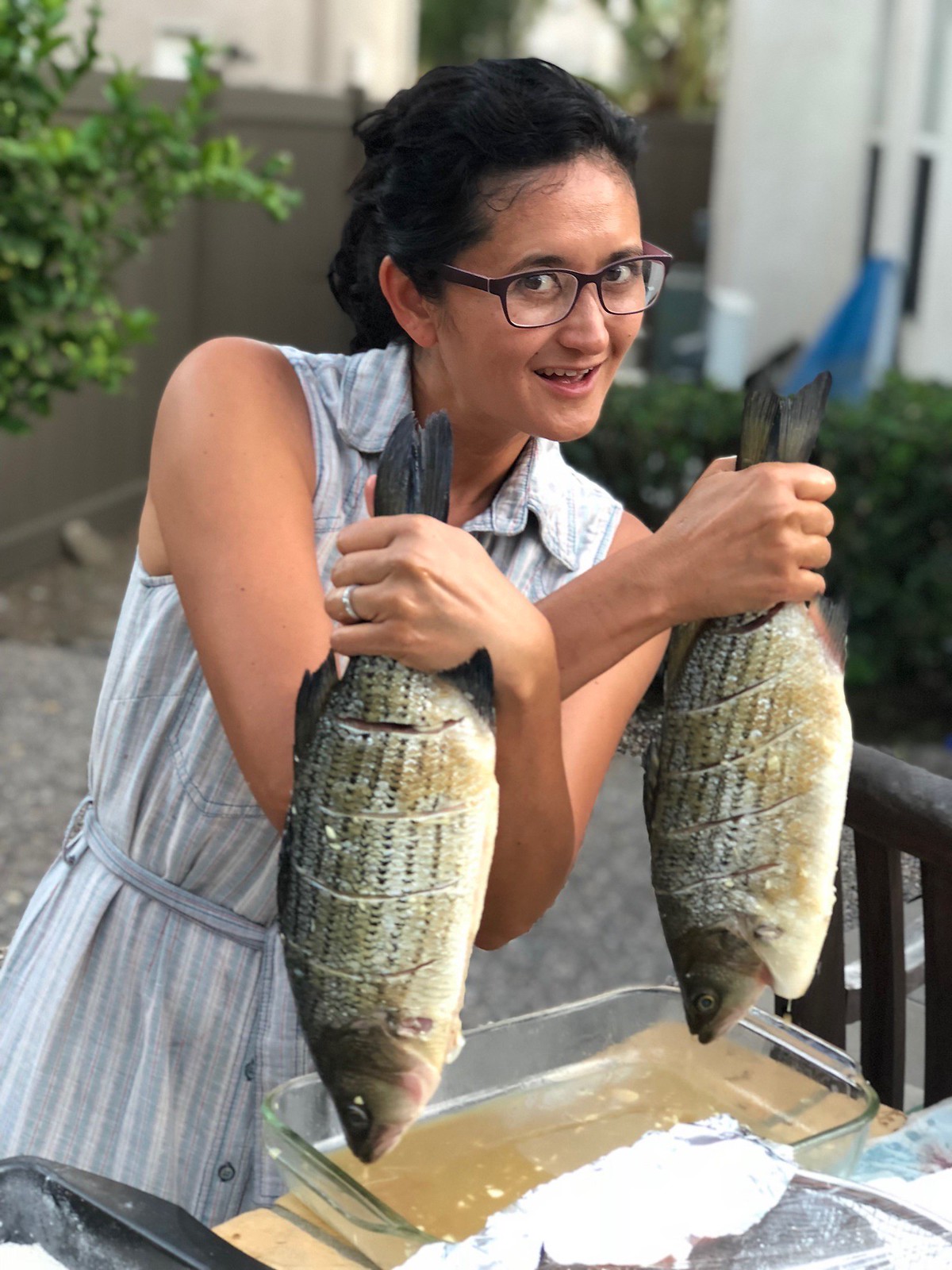 V and L went B-I-G for the entree and decided to make a version of pescado frito entero – whole fried fish.

After she seasoned the bass, L put them in a cornmeal-flour dredge…… 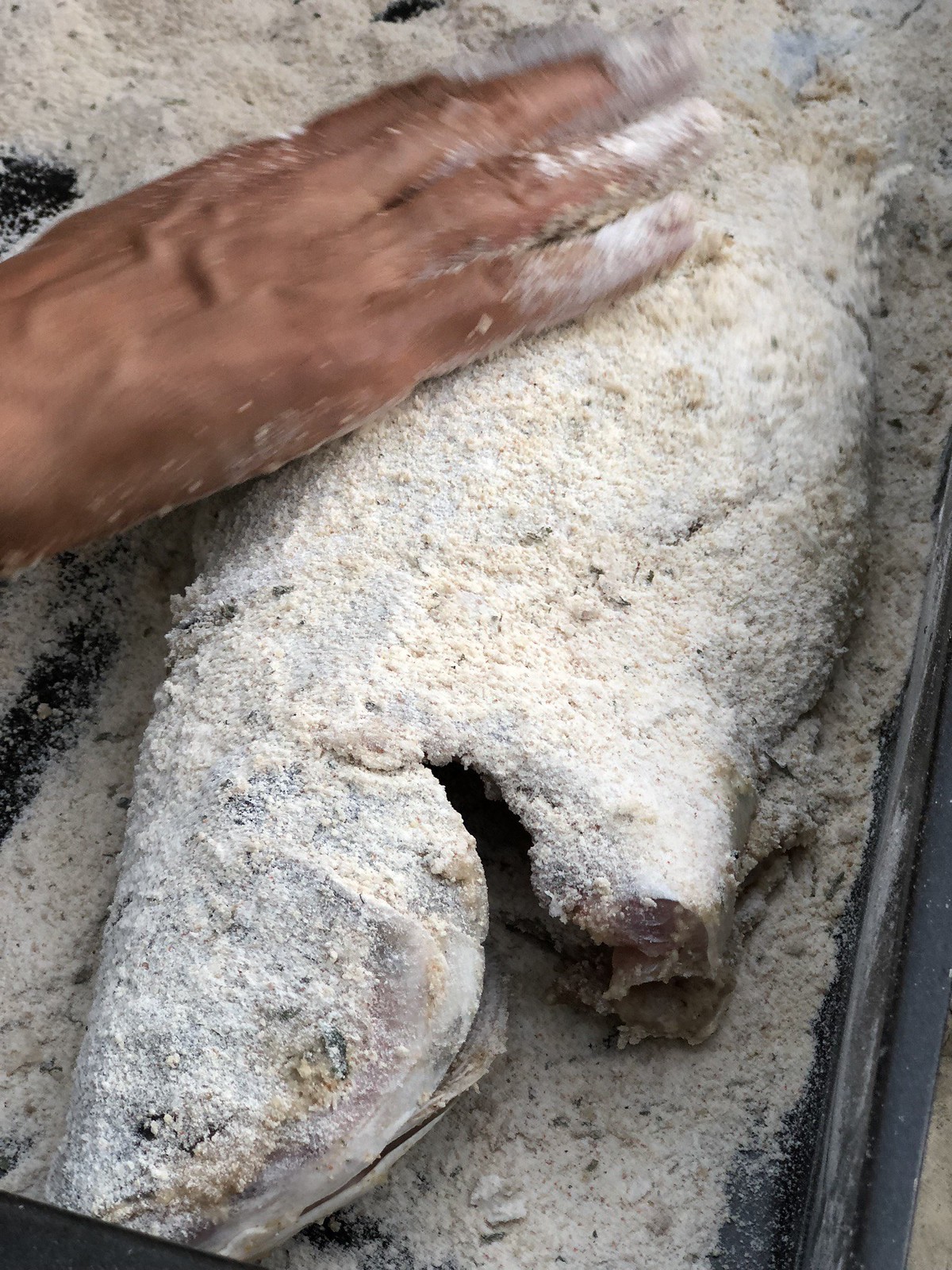 ……before gently placing them in a vat of hot oil to deep fry!

You can see why we opted to cook the fish dish outside, right? I’m sure our neighbors just adored us that day.

Then L got to work on the decadent “sauce” to top the fish with — whole shrimp with a SHIZZ TON of garlic, butter and scallions!

She also finished it off with a quick flambe of dark rum but for some reason my dang site is having issues uploading the video I took of it. 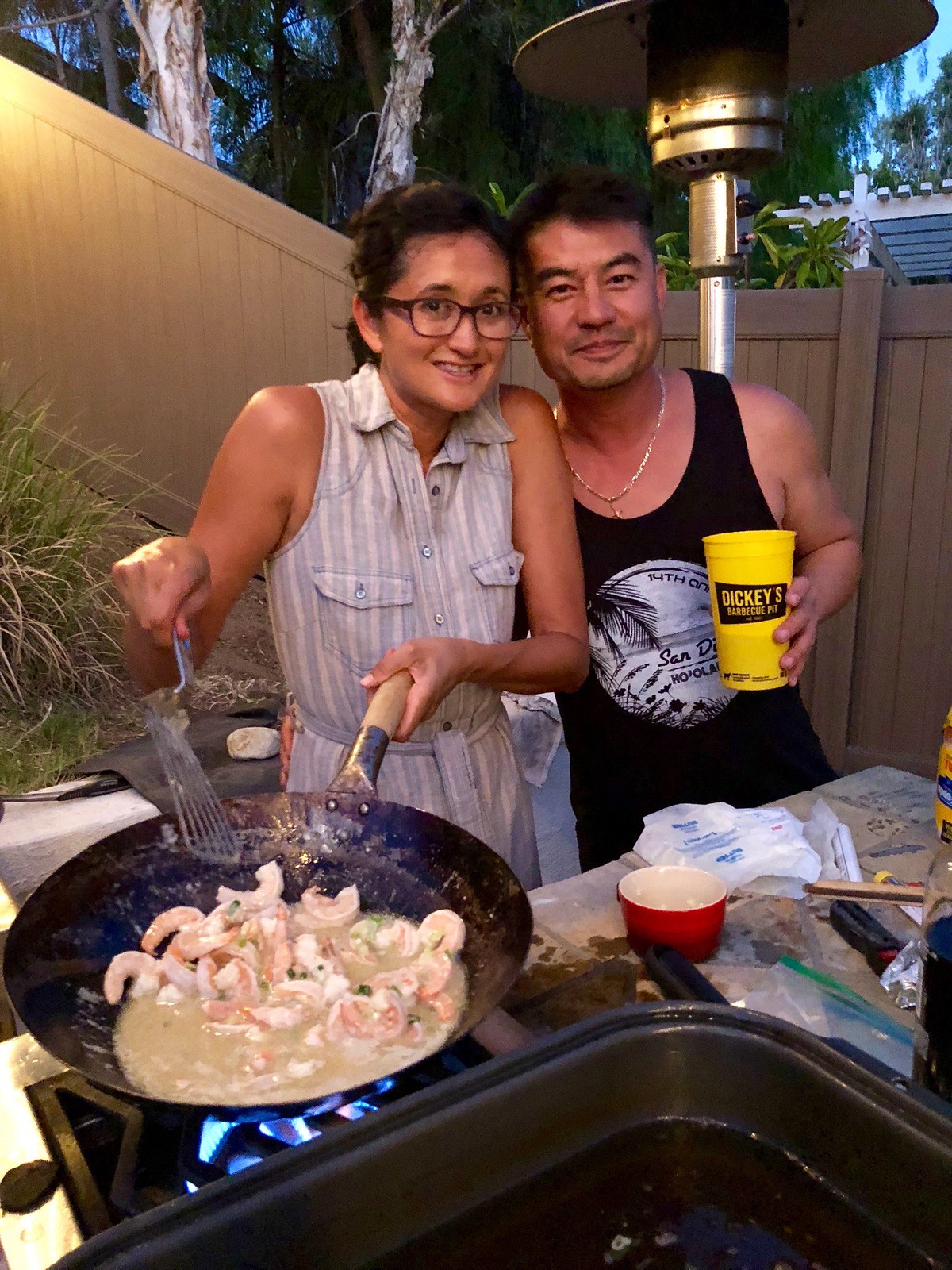 After the shrimp were sufficiently flambeed, she topped it over the crispy bass. 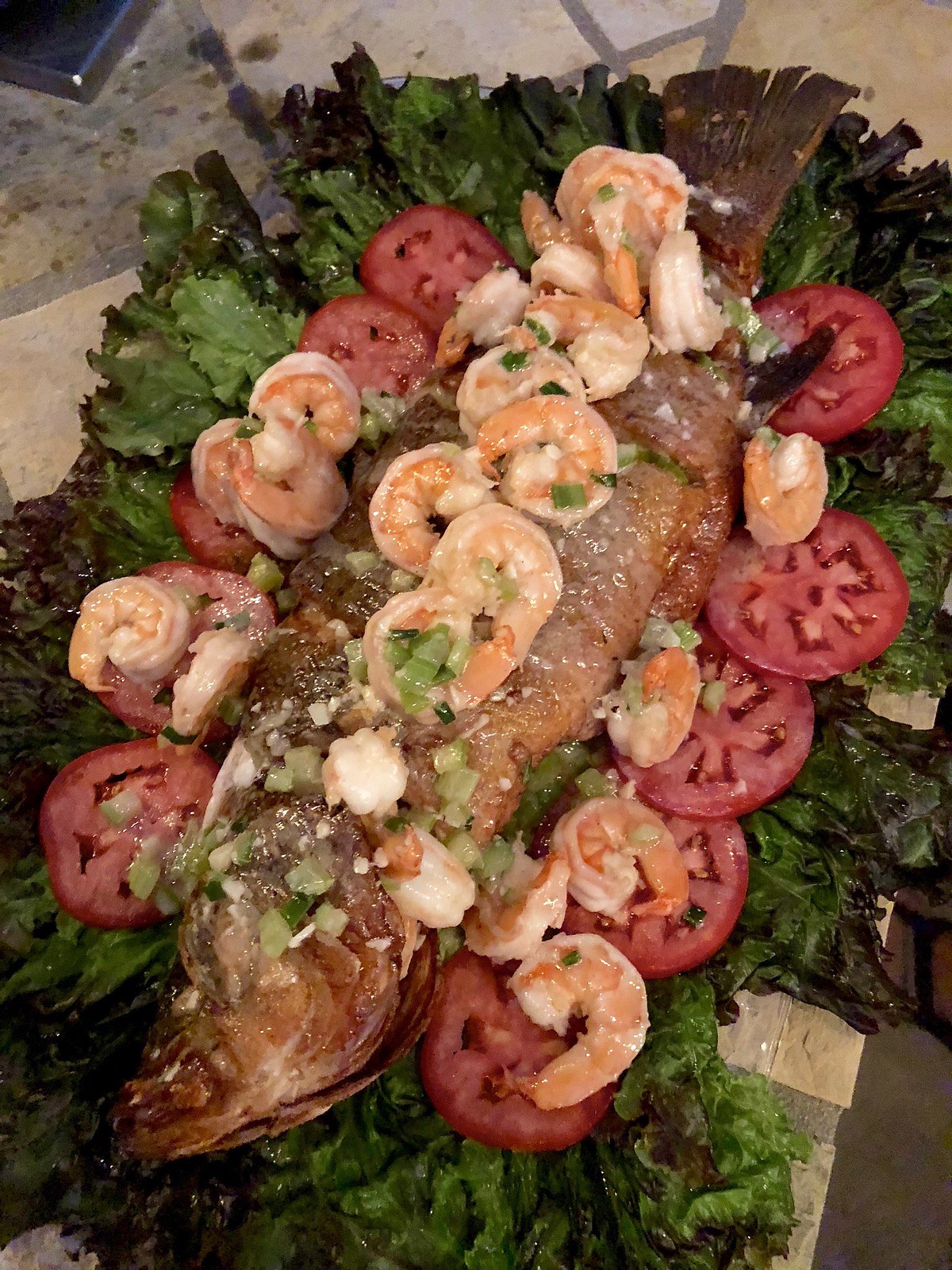 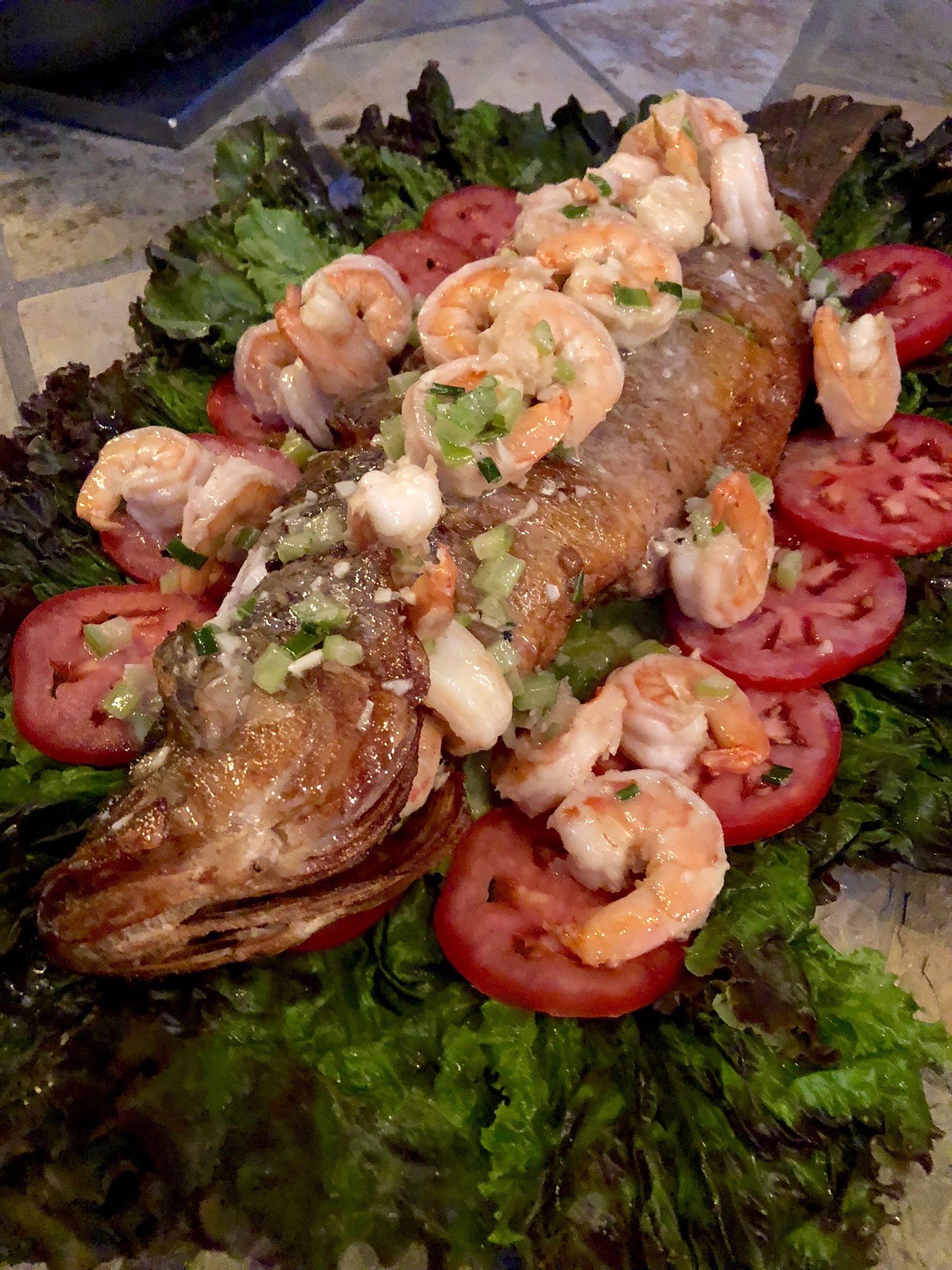 To accompany the fish, T made a big dish of Gallo Pinto – Costa Rican Rice and Beans. It was a great way to soak up all the buttery-garlicky goodness from the fish and shrimp, too! 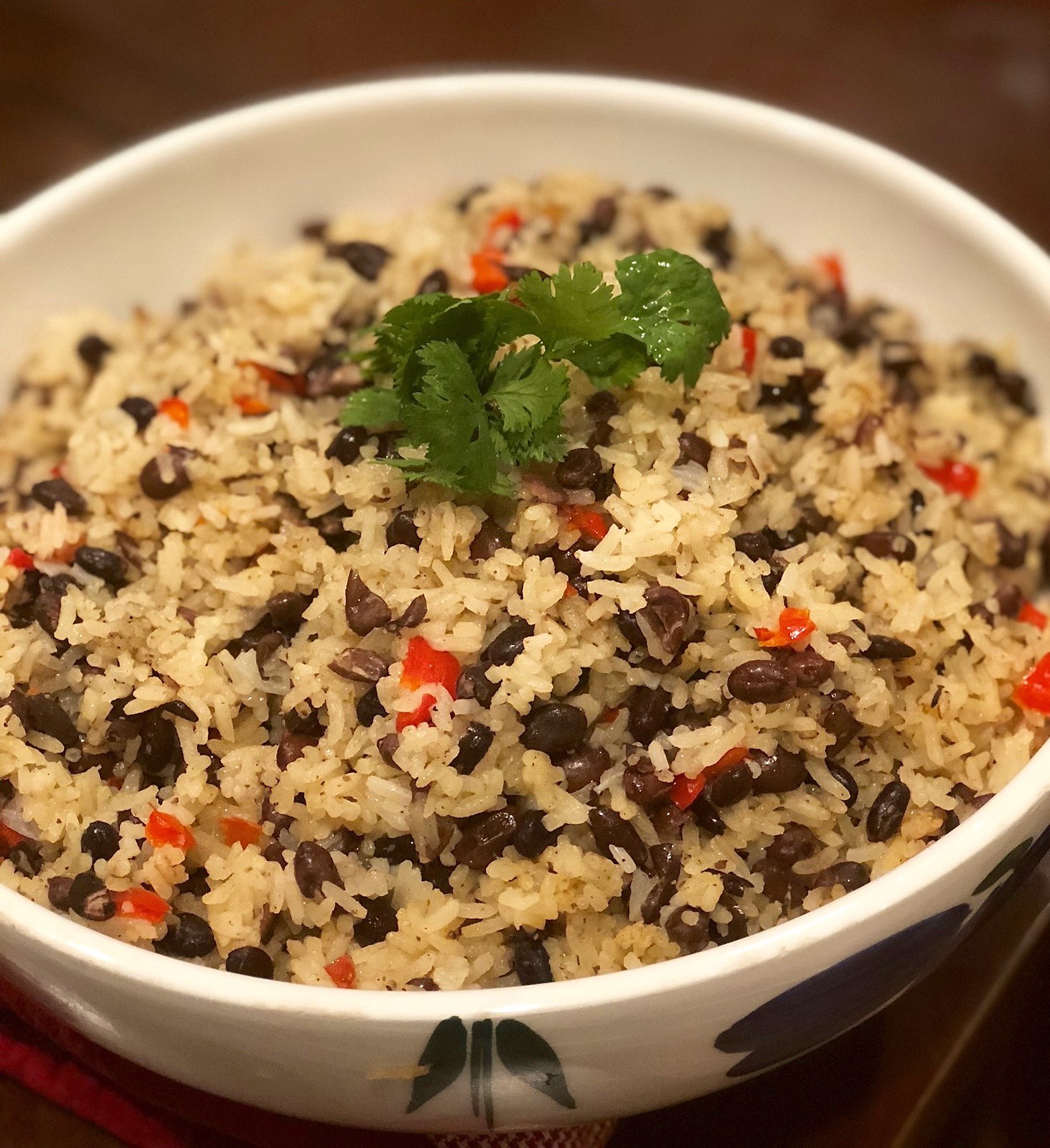 Then things got a little crazy.

I’m telling ya, N is living her best life, I mean– pura vida, these days! 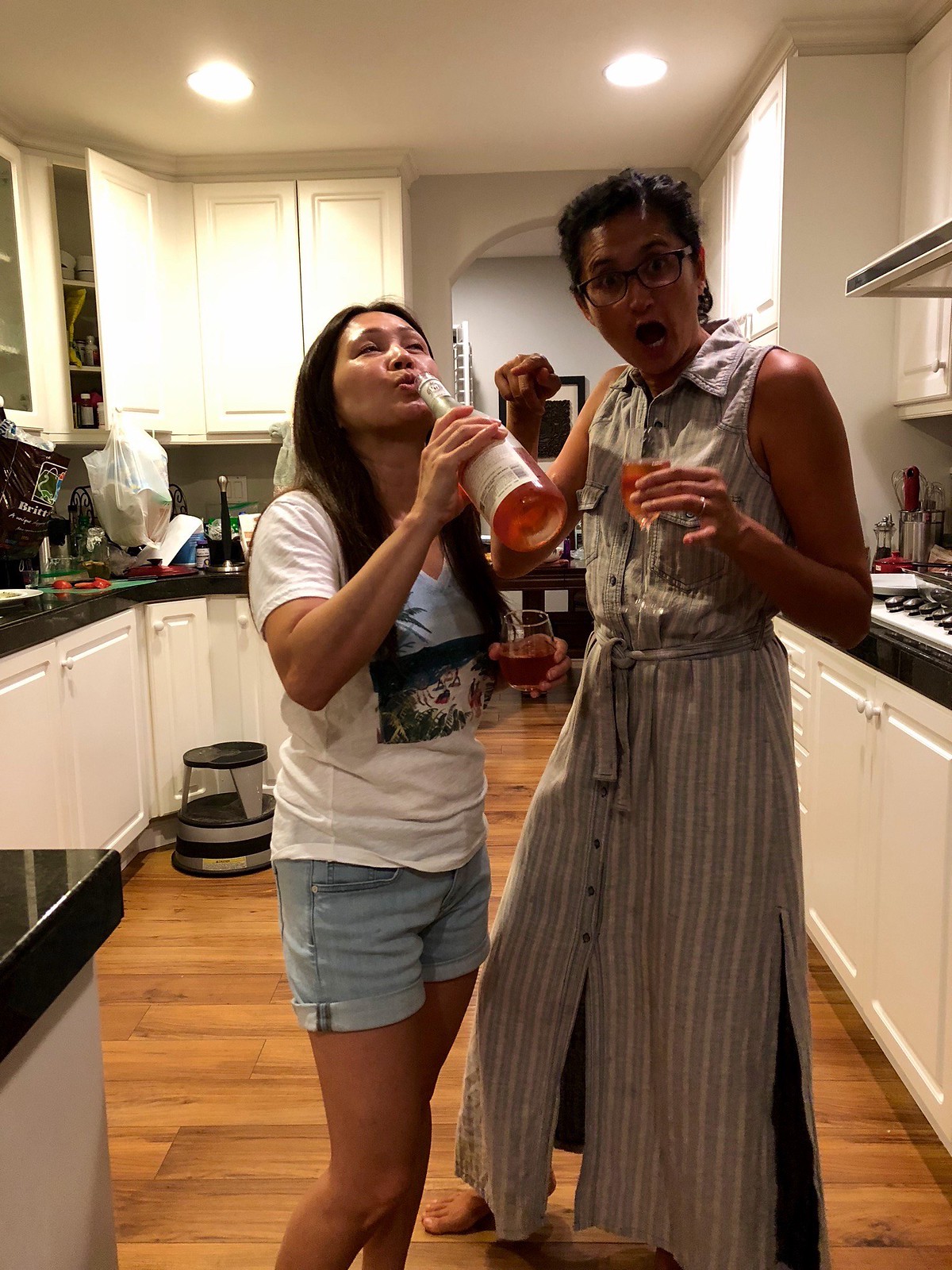 These cuties just sit back sometimes and watch how silly the adults can get. 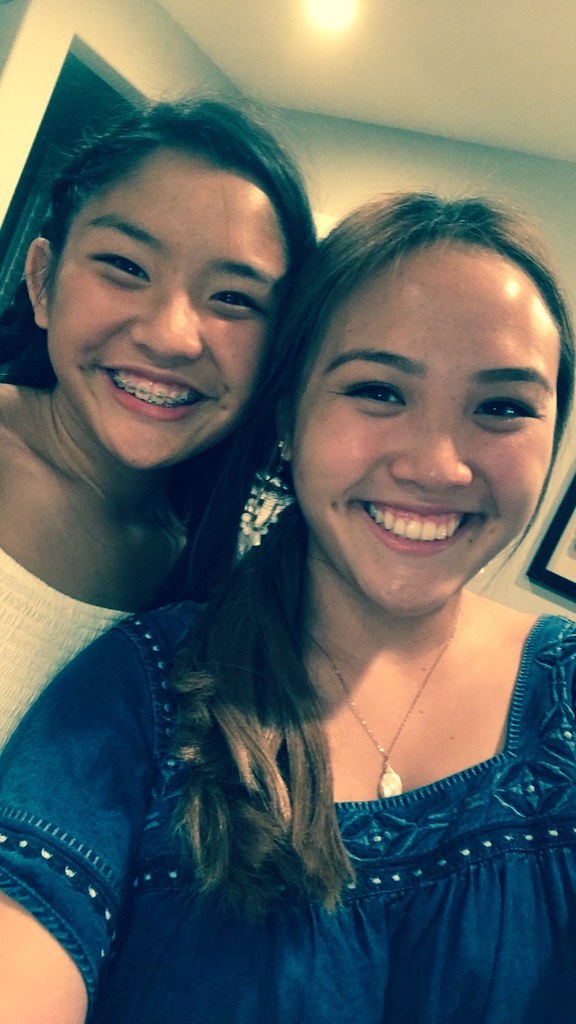 After the shenanigans settled down and the dishes were cleared, we dug into dessert.

I made Tres Leche – a three-types of milk cake. Now, I won’t say that this is an authentic Costa Rican dessert since there are many claims that its origins are from Mexico. But versions of Tres Leche can be found all over Latin America, so I just went with it.

The photo below is terrible but luckily it tasted great – despite my worries while it baked! Seester’s oven needs some TLC and can be erratic at times with its temperature so I was stressing while it was in the oven. But I guess that’s where Tres Leche can be a bit forgiving since you soak the sponge with a sugary-milk mixture until it just can’t take in anymore. I used this recipe and was pleased with the flavor.

By the end of the night, I felt that we successfully caught glimpses of the food vibes that T and her fam experienced during their time in Costa Rica. And I SURE as heck want to go there to experience it for myself too! 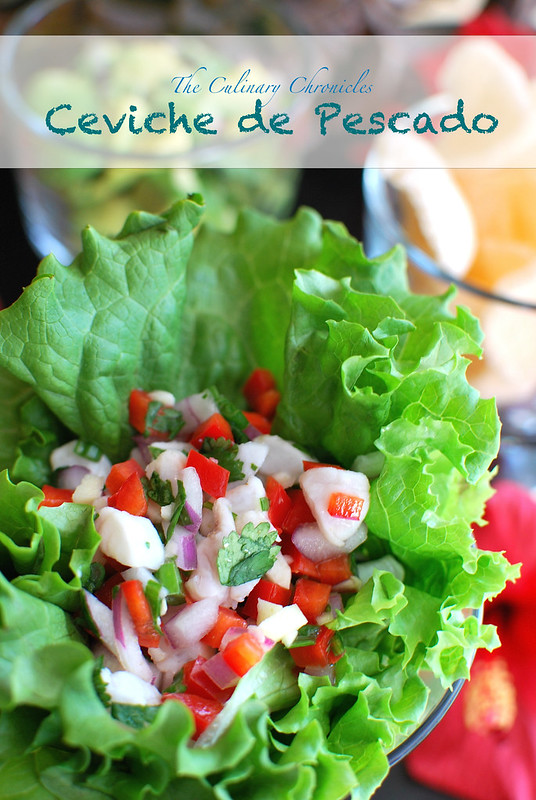 I know y’all must be tired of me complaining about the weather…..

But I can’t help it! I’m a SoCal wussy when it comes to weather and I am dyyyyiiiiinnnnggg. 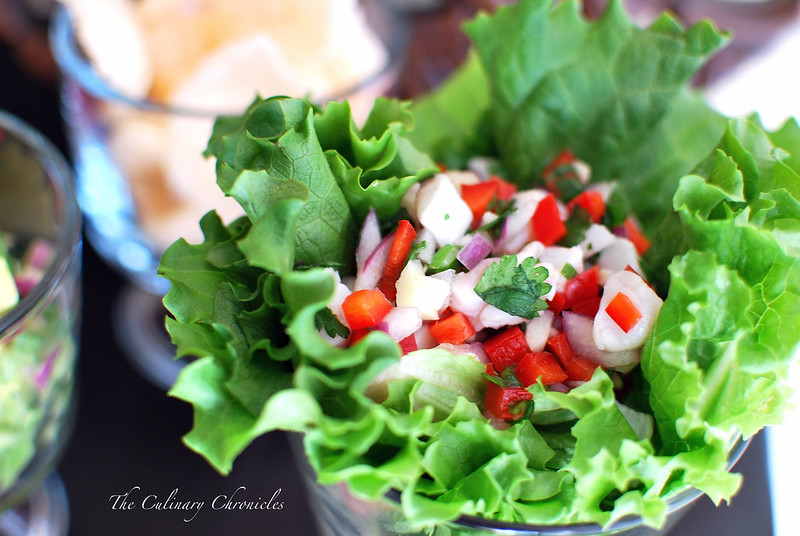 But before I pass on to the afterlife, let me pull this oldie but goodie out to share with you that is an absolute MUST during the summer— Ceviche de Pescado.

Ceviche of all sorts is quite popular in my neck of the woods having its roots in Mexican and Latin cuisines. It’s essentially a dish comprised of fish (or other seafood) that is “cooked” in citrus juice and spices. Since the acidity from the citrus “cooks” the fish, there’s no needs to crank on the stove or oven to make this little number—which is one of the reasons it’s perfect for warm days.

This time around I used a basic approach with the ceviche but depending on the region of Latin America, you can add just about anything such as corn, sweet potatoes, plantains, or even a tomato sauce. I also chose to use red snapper for this batch but any fresh, white fish will do……or even shrimp, scallops, octopus–the ocean is the limit!

But one thing is a must…..since you’re not using any heat in the preparation of this dish, you have to use the freshest proteins you can get your hands on.

How can you tell?

Sashimi grade labeled fish or products from a trusted fishmonger is generally a safe bet. But when in doubt—smell it. If it smells fishy–skip it. 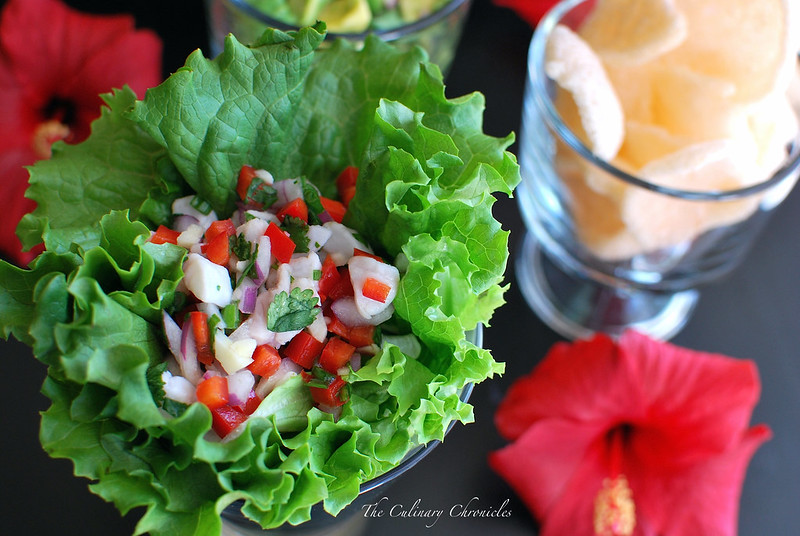 Oh…in case you were worried, my puggle turned on the air conditioner while I was passed out and I miraculously sprung back to life.

Drain and discard all but ¼ of the liquid from the bowl. Fold in the cilantro, tomatoes, cumin, coriander, cayenne, and olive oil. Adjust seasonings with salt and pepper. Serve immediately with additional lime wedges, hot sauce, diced avocados, and tortilla chips.