Our travels started off on a great note with a lovely little cocktail at the San Jose Minetta Airport. What did I enjoy? My signature Grey Goose Martini—EXTRA Dirty 🙂

A few hours later we arrived a bit weary yet very excited at the blustery JFK Airport. We settled into our digs at one of the fabulous units in Greenwich Village by Gotham Holidays (HIGHLY recommend it for folks looking for an alternative to Manhattan hotels) and were on the hunt to fill our tummies. My sis-in-law recommended a local spot to us, The Grey Dog’s so we walked a few blocks and found the small, but very cute little spot.

It appeared quite popular as the small little shop was filled to the brim with hungry brunch goers. We were lucky to snag a table for four and placed our order at the counter. I opted for a Croissant Breakfast Sandwich with Sausage and Eggs while the BF had the Breakfast Quesadilla.

My sammy was delish—light fluffy eggs covered with cheese and sausage. A batch of shoestring “fries” accompanied my plate. The coffee was strong but fresh and I loved the overall charm of the shop. Whimsical photos of frolicking pups surround the exposed brick walls while the waitstaff weave in and out of the crowds delivering plates. Yep, if I lived here, I, too would be a regular.

After hanging out with the brother and sis-in-law for a few hours at their sweet condo in the Lower East Side, we were in need for another snackie. Initially, we were going to go big and get a Pastrami sammy from Katz’s but upon arriving, we found it closed for a private event. BUMMER! But the beauty about a city like NYC is that there is always good eats around one corner or another.

We found ourselves at Yonah Schimmel’s Knishes Bakery for some good old knishes. Never had a knish? Well, they’re known to be a common snack amongst Jewish American immigrants. More often than not, it’s a mashed potato mixture that is covered in a light dough—and apparently, Yonah Schimmel’s is as good as it gets. 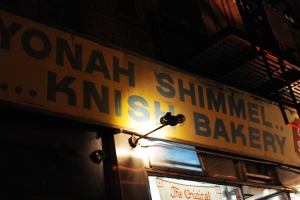 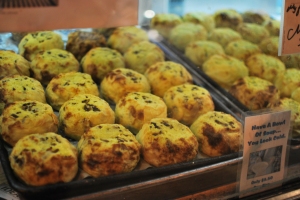 In an attempt to enjoy the knish in its purest form, I ordered the traditional Potato Knish (seen below): 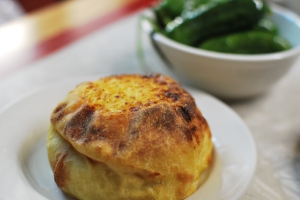 Turns out knishes also can come be served in a sweet form. My brother ordered the Blueberry (as seen below): 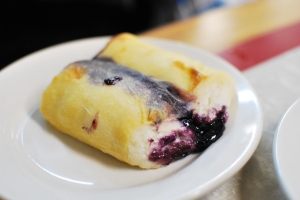 Overall, as a lover of all things potato, I found the knishes to be enjoyable, particularly with the side accompaniment of the pickles. Service and staff were not exactly the best, but when they’ve been making knishes for 100 years, I guess the product can speak for itself 🙂

Our last stop of the night brought us to Keste Pizza and Vino. Per our familia’s suggestion, we arrived early enough just to beat the dinner rush and got the last available table. Good thing too because by the time we were done with our meal, the wait was out the door. SUPER charming restaurant with friendly and efficient staff and fabulous hosts with great Italian accents. 🙂

The four of us ordered two pizzas: The Special of the Evening and the Salsiccia.

The Salsiccia was delish–savory and slightly peppery. The Special was akin to a Margherita but without the tomato sauce. The cheese was so creamy and unctuous—divine. Both crusts were thin, slightly chewy and had the great taste that only wood ovens can produce. We also ordered the House Vino which was A-M-A-Z-I-N-G. Surprised? Believe me, I was too.  🙂