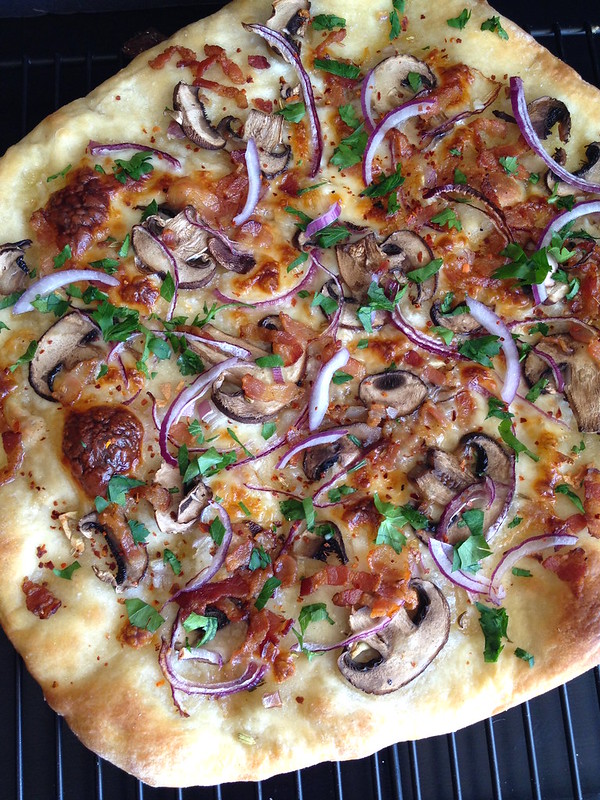 If I see an Alsatian Pizza on a menu, I’ve got to order it.

Because if I don’t do it—I won’t stop thinking about it and will have regrets for the rest of my life!! MY ENTIRE LIFE!!

Alsatian Pizzas are pure and uncomplicated but oh-so-lovely. Typically it consists of a perfect pizza dough, fromage blanc –or crème fraîche, onions and bacon. How easy is that?!

But don’t let the few ingredients fool you because they’re wonderfully paired. The creamy, slightly sharp and piquant crème fraîche is tamed by the sweet onions and salty bacon.

As in—I’m praying they serve Alsatian Pizzas in Heaven. 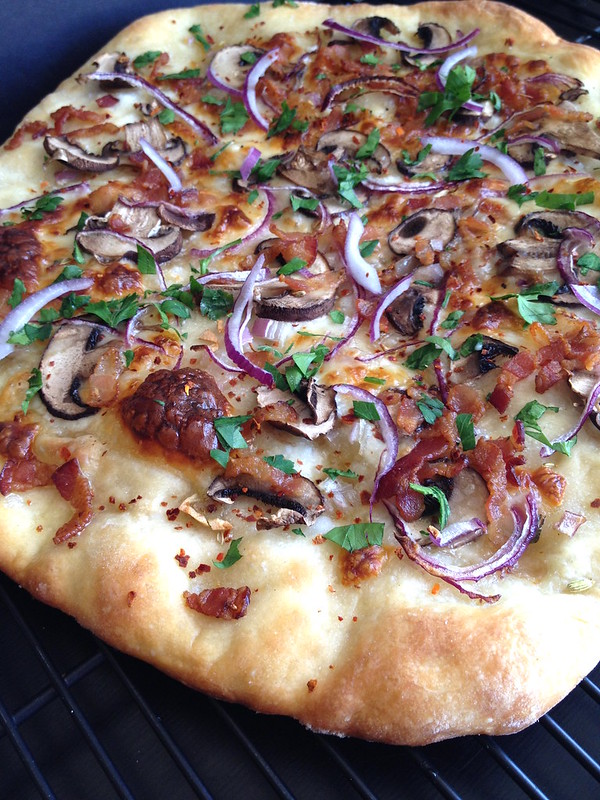 But you all know me and I can never leave things alone. So I decided to up the ante and add shredded gruyere, sliced mushrooms, and use BOTH caramelized and raw red onions. Why the heck not—LET’S GET CRAZY TODAY!!!

Because it is National Wine Day, which incidentally, goes perfect with my “sorta” Alsatian Pizza. ❤

While the oven preheats, cook the bacon in a skillet over medium-low heat until the fat has rendered and the bacon begins to get crispy. Do not over-brown the bacon, as it will continue to crisp in the oven. Use a slotted spoon and transfer the bacon bits to a plate covered with paper towels. Sauté ½ cup onions over medium heat in the bacon drippings until they become golden brown. Set aside

Take the pizza dough and flatten it with your hands on a floured surface. Use a floured rolling pin to gently roll the crust to about ¼ of an inch thickness. Transfer the rolled out dough to a pizza paddle or lightly floured cutting board. Spread the crème fraîche evenly over the dough. Scatter the caramelized onions, gruyere, bacon, crimini and fresh thyme leaves on top. Season the entire pizza with salt and pepper and drizzle with extra virgin olive oil.

Remove the pizza from the oven. Sprinkle the remaining sliced red onions, red chili pepper flakes and parsley over the top. Slice the pizza and serve warm 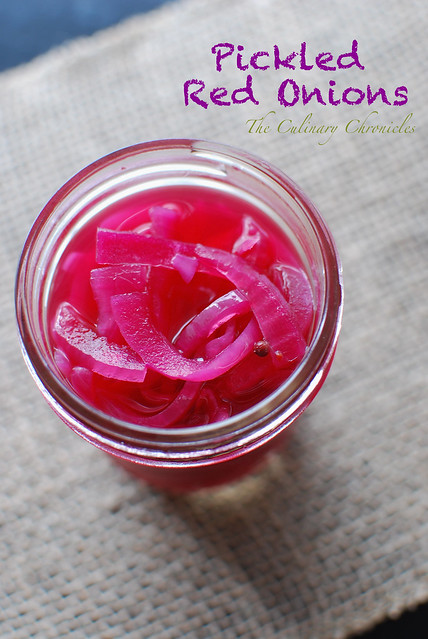 My seester gave me a jar of pickled onions she made and they lasted exactly 376,901 seconds.

Ok…more like a week. But nonetheless, I inhaled those pickled onions. Tart, slightly sweet with a bit of a crunch. They’re the perfect accompaniment to just about anything—

On top of barbecue…..

And my favorite, inside tacos. 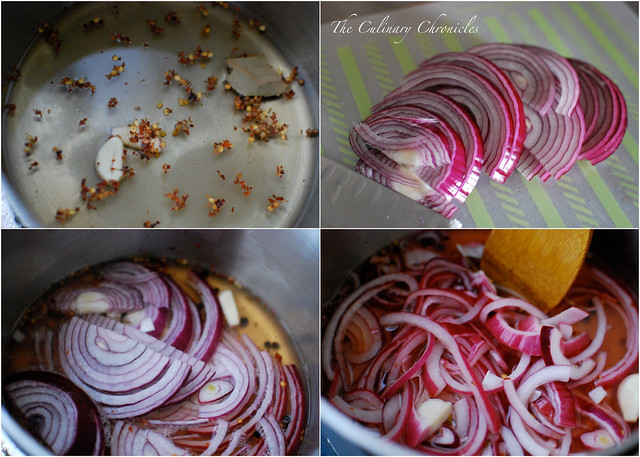 So since I gobbled up the jar she gave me, I had to restock for Cinco de Mayo. My version is quick to make and you can easily add/remove any spice you like. Need some ideas on what to serve these purty Pickled Red Onions with for Cinco de Mayo? How about:

And yes, the bright fucsia color is all natural. Isn’t it lovely?

In a pot, add all the ingredients except the onions. Place the pot over medium heat and stir until the sugar and salt has dissolved. Stir in the onions and cook for 1 minute.

Remove the pot from the heat and allow to cool to room temperature. Place the onions with the liquids in a jar or container and refrigerate. The pickled onions are ready to be enjoyed after a few hours in the refrigerator and can be kept (in the fridge) for a few weeks.

*To release more of the spice flavors, you can use the flat side of a chef’s knife to slightly crush the coriander and peppercorns.

Remember that bread-baking kick I was on a few weeks ago?

Told you I needed an intervention. 🙂

But in my defense, I think Focaccia could be considered almost “pizza-like”.

I stumbled upon this recipe from Cookin’ Canuck awhile back and was happy to give it a spin. Dara’s site is fabulous and chock-full of delish recipes! And this focaccia is no exception.

It came together quite easy and the flavors were well balanced.  I didn’t have any fresh tomatoes on hand and decided to substitute them with sundried tomatoes—a tasty alternative! Just be sure to allow the focaccia to bake for 2/3 of the cooking time before adding the sundried tomatoes—or else they’ll burn! And that is definitely No Bueno.

As for my bread-baking obsession, I assure you that it’s currently under control.

Well….temporarily at least. I am ALL out of yeasts. 🙂

In a medium bowl, stir together yeast, warm water, and honey. Let rest until yeast blooms and bubbles form on top, about 10 minutes. Stir in flour, 1/4 cup olive oil and 1 teaspoon kosher salt. Turn the dough onto a well-floured surface and knead until dough is smooth, 5 to 10 minutes. Place dough in a lightly oiled bowl, cover with a kitchen towel or plastic wrap, and let rest in a warm place until dough doubles in size, about 1 hour.

Remove dough from bowl and press it into a lightly oiled 9- by 13-inch baking sheet until it touches the edges. Using your finger, poke holes all over the dough. Drizzle the dough with 2 tablespoons olive oil. Let rest until the dough becomes puffy, about 20 minutes.

Bake for about 10-15 minutes and add sundried tomatoes. Return to the oven and continue baking until the focaccia is golden brown, about another 5 minutes. Remove from oven and allow to cool on a rack. Cut into pieces and serve.