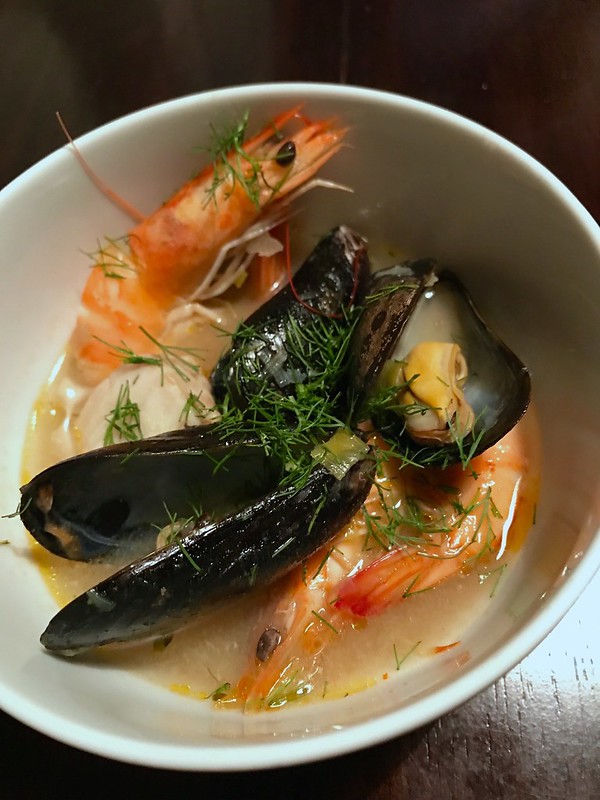 When it comes to Lucasauraus and C’s birthday, we always know that there will be some combination of seafood, matcha and mint chip ice cream on the menu for Fam Din. And no–not all mixed together, Silly!

And who can blame them–I love all of it too! 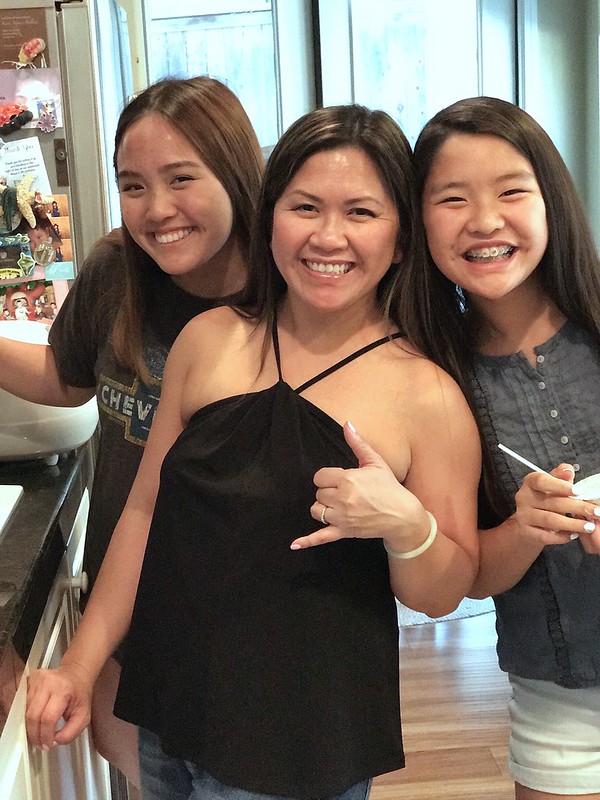 We gathered at T and R’s place in Fullerton on a sunny afternoon to get down on some cookin’ and grubbin’!

And there may have been a cocktail or two before we switched over to wine. This month we went back for the Hendrick’s Gin and Tonic with Cucumber and Lime. C’mon, it’s a classic–not to mention totally refreshing on a warm Southern Cali afternoon. 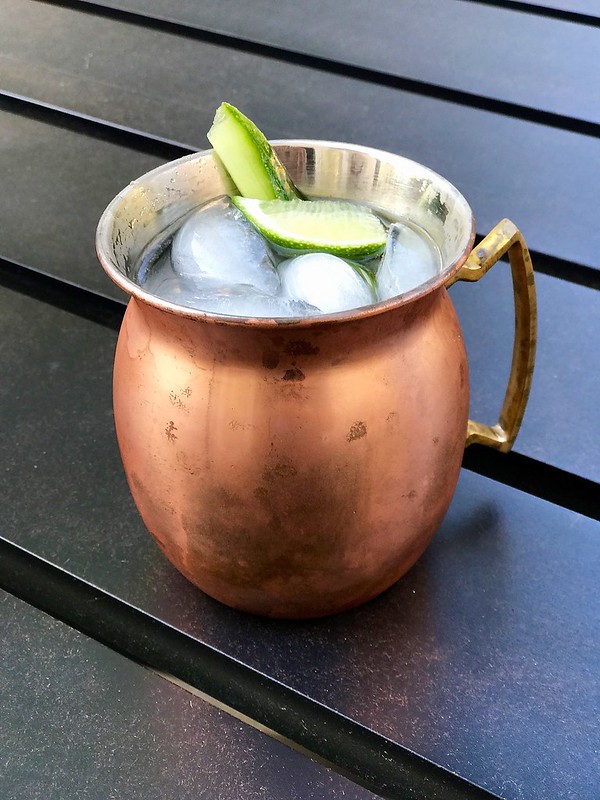 And how So Cal is it that somehow succulents were involved?

Yea, I have no idea what N was doing with these. 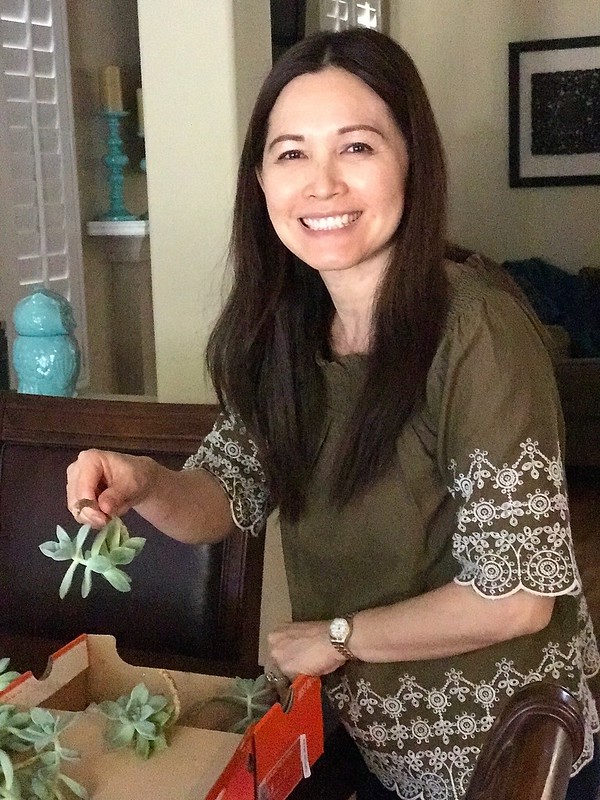 Now let’s get back to the food, shall we?

Since our entree was slated to be on the lighter side—well….”lighter” than our normal fare, we had three different appetizers to sate our tummies.

First up, Deviled Eggs with Smoked Salmon that brother fixed up using Eric Ripert’s recipe. I am a sucker for a good deviled egg and these were no exception. They featured the classic rich flavors and was topped with the smoky, salty salmon.

They’d be perfect for brunch too! 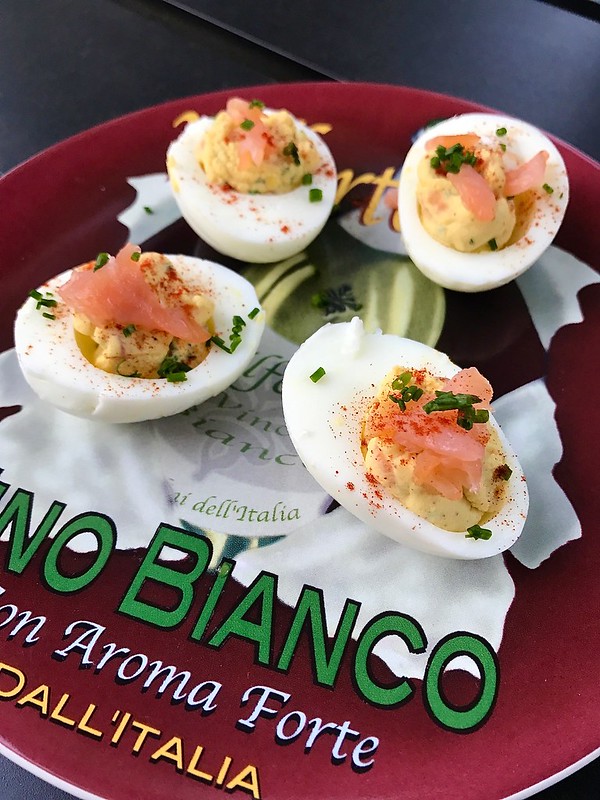 And since Lucas is a salmon-eating-monster (has been since he was barely 2) we needed MORE of the fatty fish–LOTS MORE! So we put the nieces to work and they got rolling on these beautiful Salmon Temaki.  They were filled with seasoned rice, avocados, luscious slices of salmon, daikon sprouts and of course, that magnificent “crack sauce” that Nini makes.

That sauce is seriously E V E R Y T H I N G! It’s a mixture of mayo, sambal, sriracha, soy sauce, sesame oil, chives, tobiko and I’d venture to say–a splash of her soul. It is THAT good.

I inhaled about 20 dozen of them. Screw that summer bikini diet. 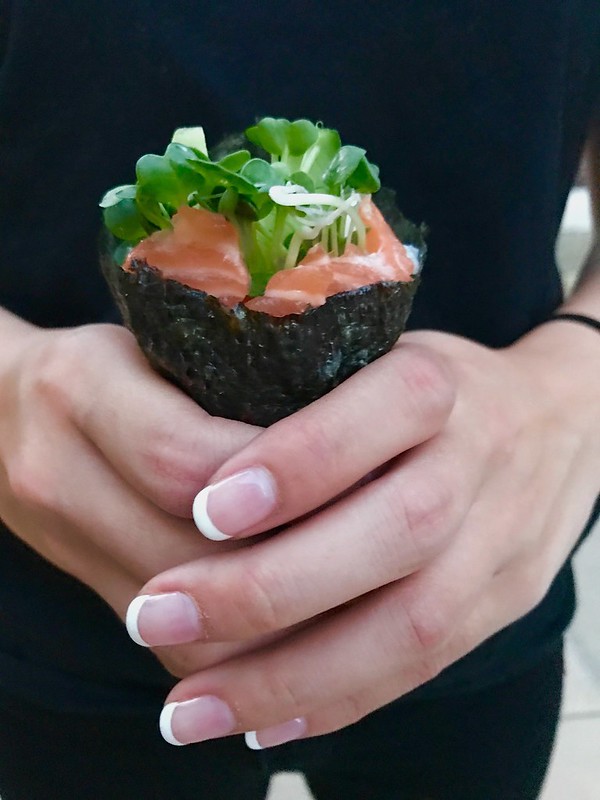 A birthday Fam Din for Lucas and C without sashimi?? Not on our watch!

In fact, there may have been 1 or 2 plates of Hamachi Sashimi. 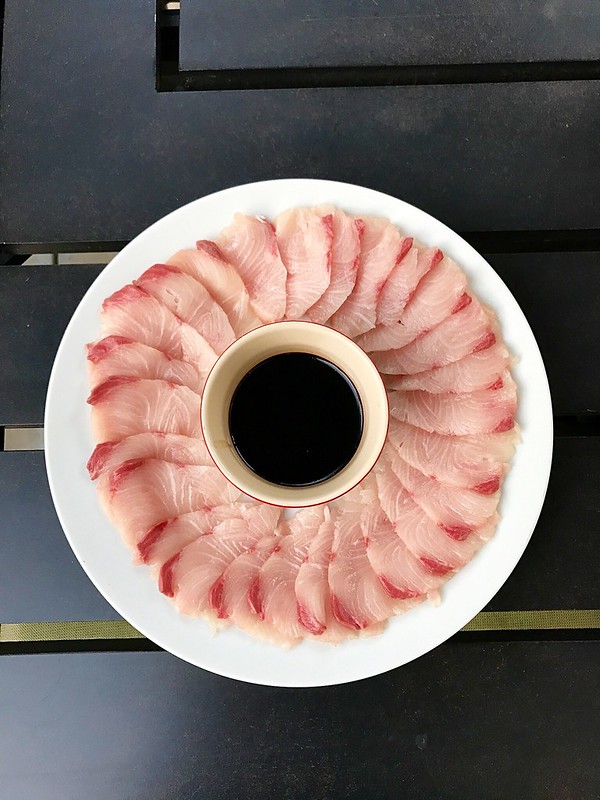 It does this foodblogger’s heart proud when she sees the munchkins doing this…..

Shall we move on to main course?

When we asked C what he wanted for dinner, he replied “seafood stew—bouillabaisse”. Ok then, we’re on it!

Well actually, seestrah T was on it—and hence the “Bulaon-baisse“. What’s a “Bulaon-baisse” you may be asking? It’s when T is in charge of the bouillabaisse, has a few glasses of vino while making the stock and merges her married name (Bulaon) to the classic Provençal stew.

But a funny dork.

All joking aside, T put some serious time and love into creating the broth of the bouillabaisse. She simmered the excess fish trimmings with aromatics such as bay leaves, orange peels, and a bouquet garni to produce a rich seafood stock. In a separate pan, she sweated the fennel, onions, and garlic and then reduced it with wine before adding in the stock, tomatoes and saffron. After what seemed like a gajillion years, the stock was strained and we were left with a flavorful and clear broth.

That broth was brought to a boil, and the fish, shrimp, and mussels were cooked in it.

Speaking of fish, my B.I.L., aka Mr. Bulaon, caught the below red snapper and cod that we used in the bouillabaisse. Isn’t he handy?

So all in all, I guess it was a Bulaon-baisse! 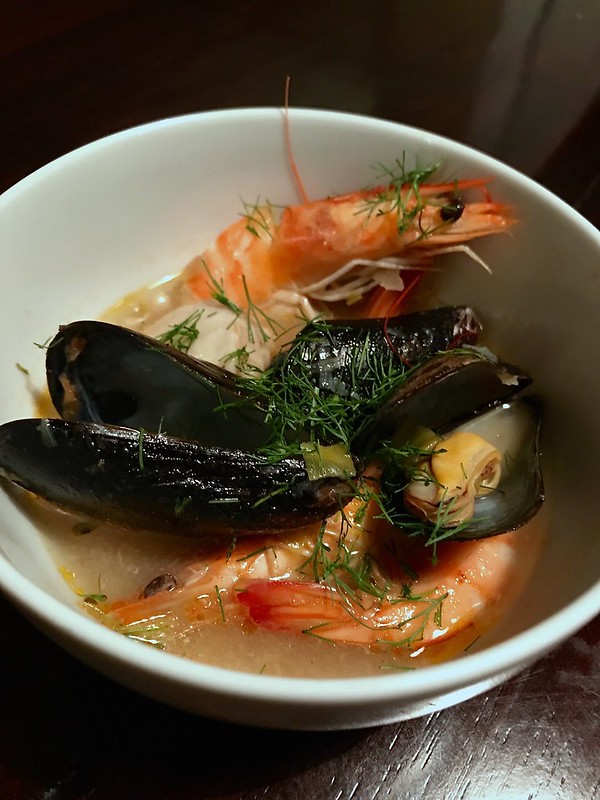 C loves him some matcha. I can’t remember the last time we made him a birthday dessert that green tea wasn’t involved. And I tell ya–I’m quickly running out of ideas people!

As I scoured the internet for some inspiration, I stumbled upon a Coconut-Matcha Cream Pie and decided to give it a try.

I was a bit disappointed by how much the crust “shrunk” after it was baked. I let it thoroughly rest before rolling it out and even froze it for an hour before baking. I blind baked the crust and the temp wasn’t too high either. Eh…that’s how it goes with baking sometimes.

As for the filling, it was rich and had the texture of a firm pudding. The coconut flavor was very subtle and it wasn’t too sweet. I’m glad I opted to add matcha to the whipped cream to amp up the flavor.

Overall, not bad but not great. 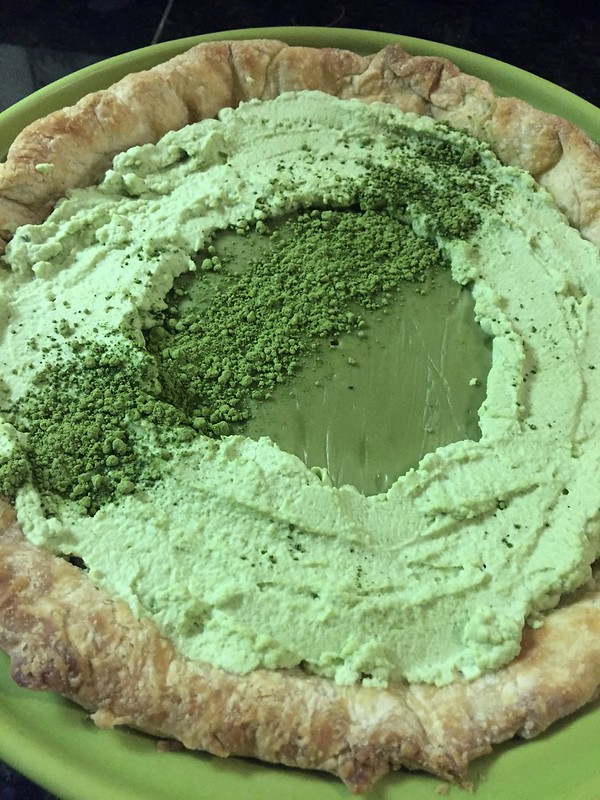 As for my mint-chip loving nephew, a Grasshopper Ice Cream Pie seemed perfect for Lucas. The base what made out of crushed Oreo cookies and crushed Thin Mint Cookies. I then added a layer of softened mint chip ice cream (it HAD to be the green kind too!), a drizzle of chocolate sauce, a layer of more crushed cookies and a final layer of ice cream. The whole thing was put in the freezer for a few hours before topping it with whipped cream and more cookies.

I am embarrassed to say that the below picture looks rather a hot mess. We had some melting issues on the drive from Tustin to Fullerton and we attempted to mask it over with more whipped cream. But all looks aside, it was delicious and the bday boy approved! 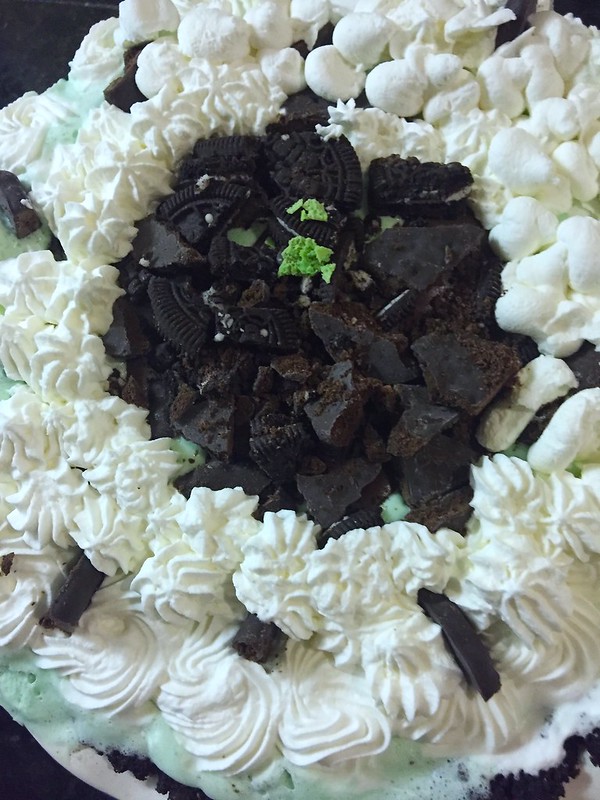 Another scrumptious Fam Din in the books! 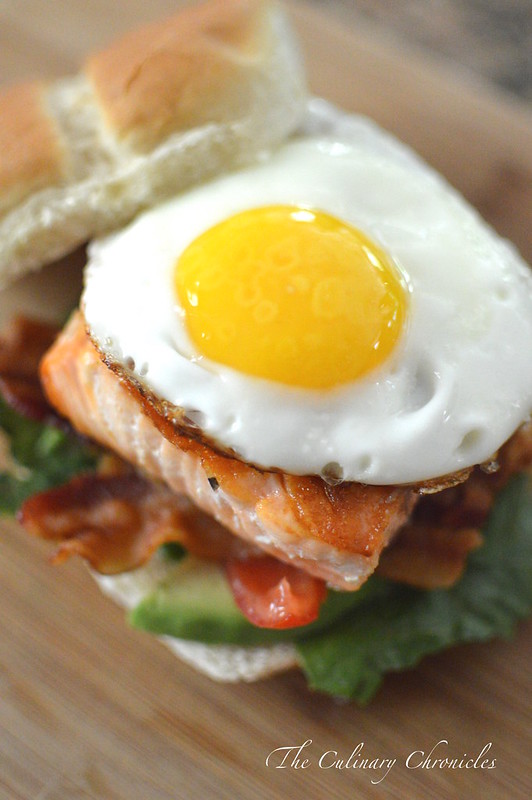 This week we’re giving one of my favorite ingredients some love.

Something so versatile, quick to prepare and that can send almost anything over the top. 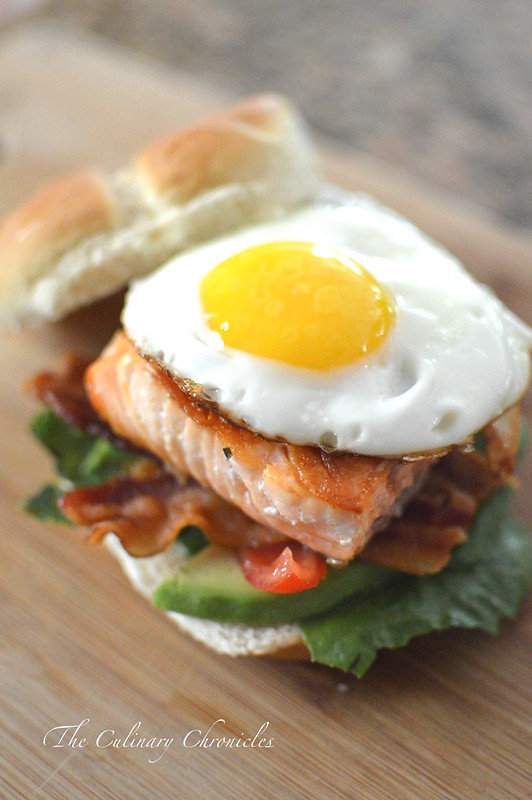 Sandwiches? Throw an egg on it…..

Ramen Noodles? DEFINITELY, Throw an egg on it….. 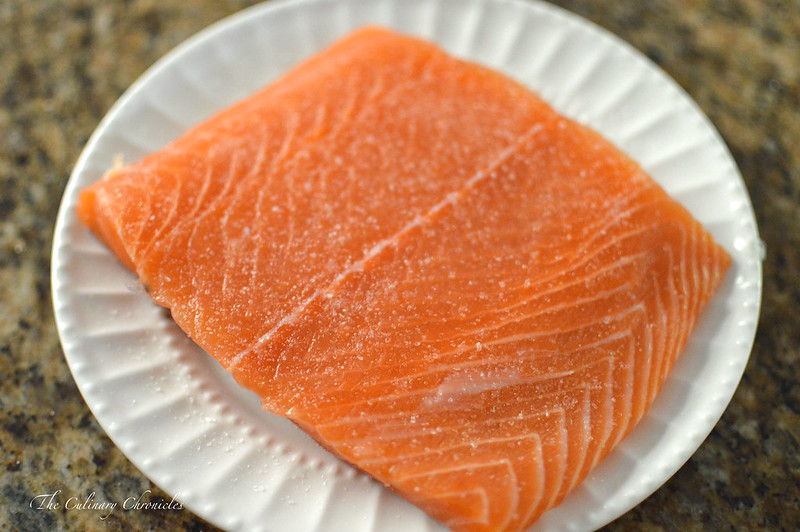 Eggs have that magical ability to bring almost anything it touches to the next level. When adding a poached or runny fried egg to a dish, it becomes something so decadently transcendent—unctuous, sinful, delicious.

All that with just an egg! 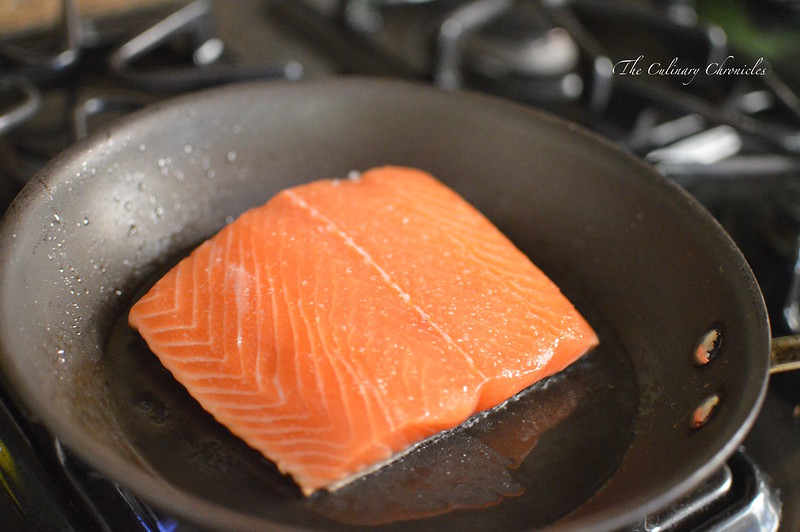 To close out National Sandwich Month and for my next contribution to Safest Choice™ Darling Dozen, I thought I would whip out a hearty and fun sandwich…. B.L.E.A.T.S. 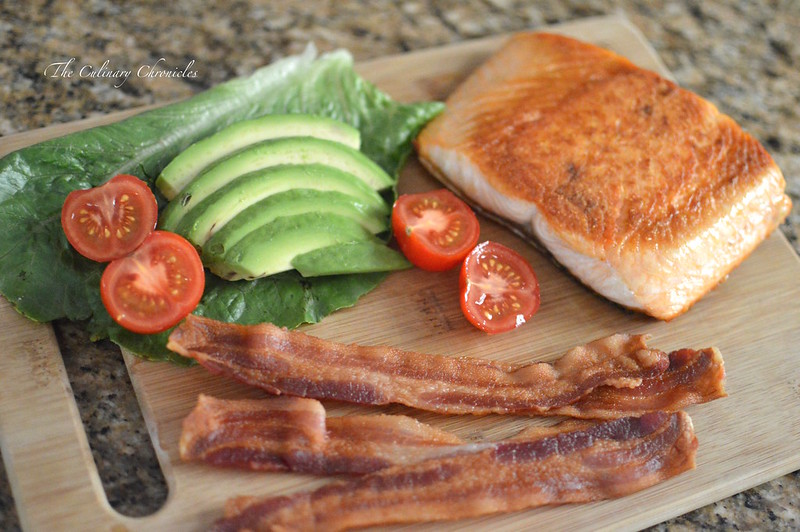 It all starts with an easy sriracha mayo I mix up to hold everything together or you can use any other spread that suits your fancy.

You get the gist…. 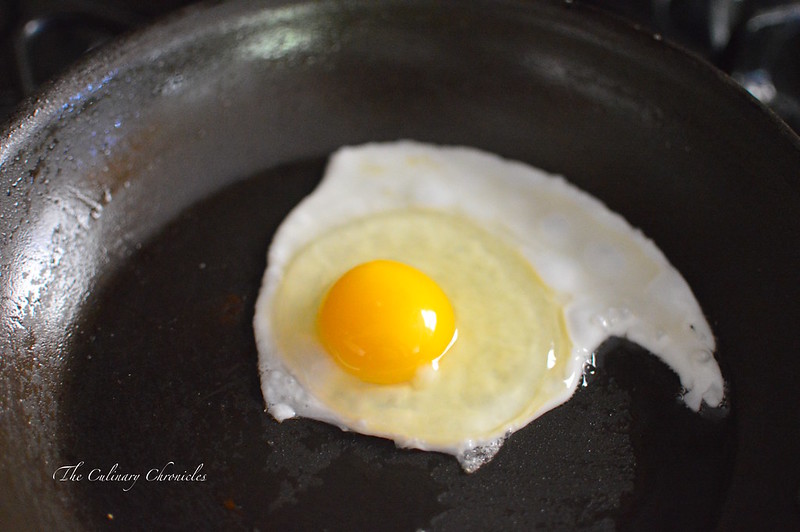 Next comes the salmon that is simply seasoned with kosher salt and then pan seared until it’s crispy on the exterior but still moist and tender in the middle. I happened to have a large fillet here but if you can’t find one big piece, just grab a couple smaller fillets.

Then, I cracked a few Safest Choice™ pasteurized eggs in the skillet and fried them until the edges were crisp and the yolks had just barely set.

I’m all about an ooey-gooey egg yolk…..it makes it seem a bit sinful—but don’t feel guilty. I sure as heck don’t. 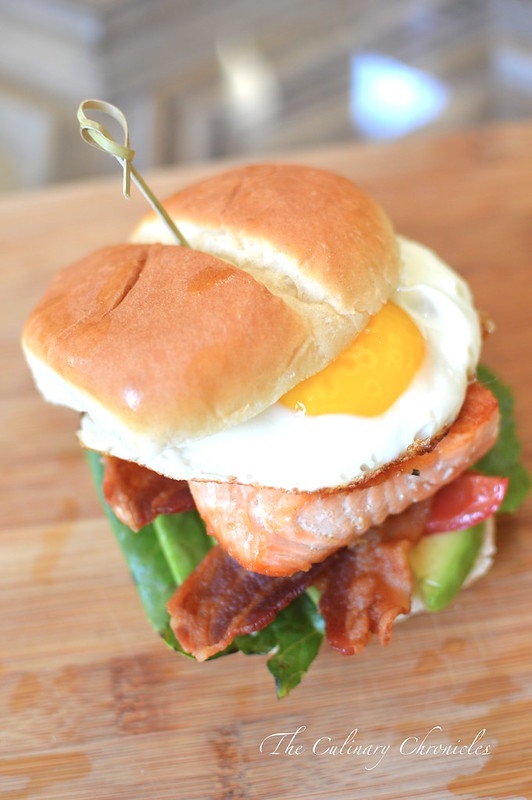 Once that’s all done, everything gets layered in between some hamburger buns or rolls. It truly is a behemoth of a sandwich and incredibly messy to eat.

But so wonderfully worth it!

And if you can’t get a little messy at home while enjoying some B.L.E.A.T.S. then you’re just not living life. 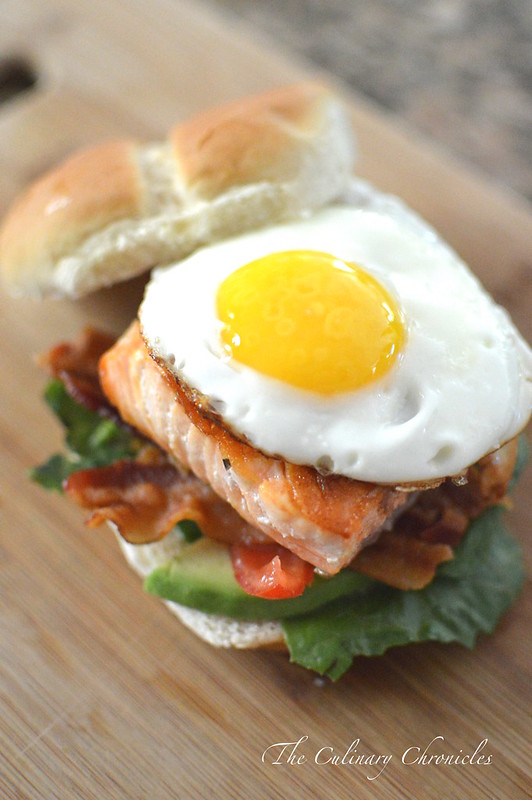 In a small bowl, whisk together the mayonnaise, sriracha, sesame oil, garlic and 2-3 pinches of kosher salt. Cover and refrigerate the sriracha mayonnaise.

Liberally season the salmon fillet with salt on both sides. Heat a large skillet over medium-high heat. Add 2 tablespoons of oil and swirl it around to coat the bottom of the skillet. Carefully lay the salmon fillet into the skillet. Allow the salmon to sear, undisturbed, for about 4-5 minutes depending on the thickness of the fillet. The salmon should be about ¾ cooked through. Gently flip the fillet and allow it to brown on the other side for another 2-3 minutes until the center is barely pink. Remove from the skillet and transfer to a large plate to rest.

Use paper towels to wipe the interior of the skillet. Heat ½ tablespoon of the oil over medium-low heat. Crack 2 Safest Choice™ pasteurized eggs in the skillet and fry until the center has set and the whites are opaque. Sprinkle each egg with salt. Transfer the fried eggs to a plate and repeat with the remaining oil and eggs.

Squeeze the lemon over the rested salmon fillet and cut into four even pieces.

Assemble the sandwiches by spreading sriracha mayonnaise inside each of the hamburger buns/rolls. Top the bottom of each bun/roll with lettuce, avocado slices, tomato slices, bacon strips, salmon piece and then a fried egg. Place the top of each bun/roll on and serve.

*DISCLOSURE: As a brand ambassador for the Safest Choice™ Darling Dozen, I was compensated for the creation of this recipe and post. However, as always, all opinions are my own.* 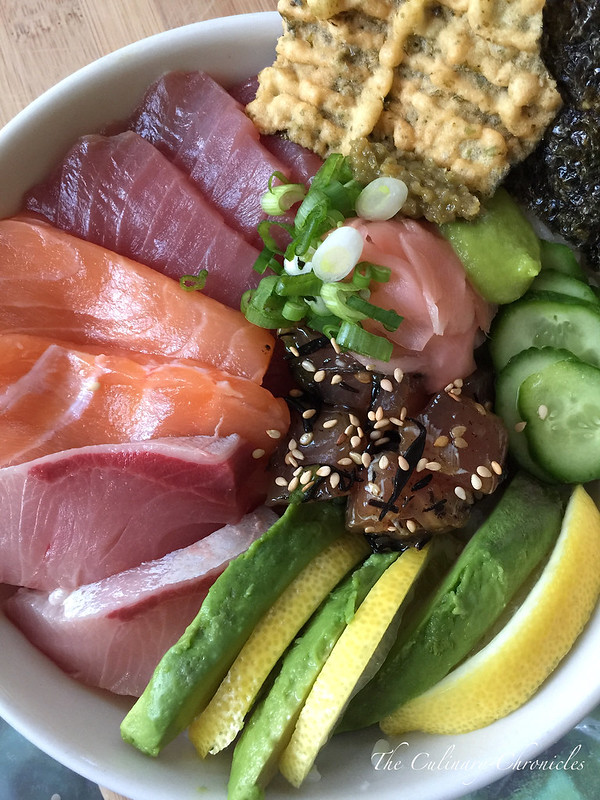 Oh Chirashizushi….how do I love thee?

Fresh fish, veggies, pickled ginger, wasabi and perfectly cooked sushi rice—-all mixed up in a bowl. Chirashizushi (ちらし寿司) or chirashi, translates to “scattered” which is one of the beauties about this dish.

As much as I love sushi rolls and nigiris, this gal can get terribly lazy sometimes. So to be able to throw all the ingredients that I love in sushi into one bowl is just genius. 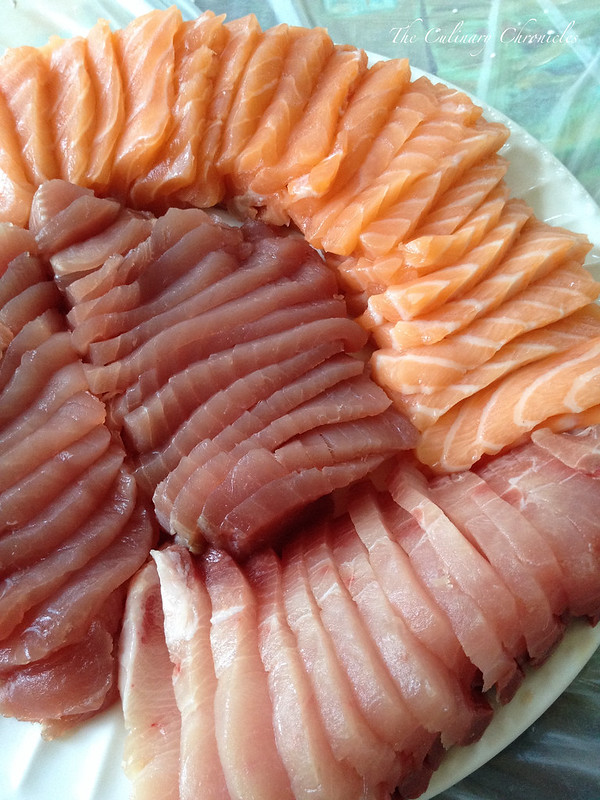 I had been up at my seester’s place one weekend when we decided to pop into a local fishmonger we had discovered some time ago– Dry Dock Fish Company. It’s a smaller little shop, tucked away in Fullerton. But if you’re in the area, you must check it out because it’s an absolute gem. 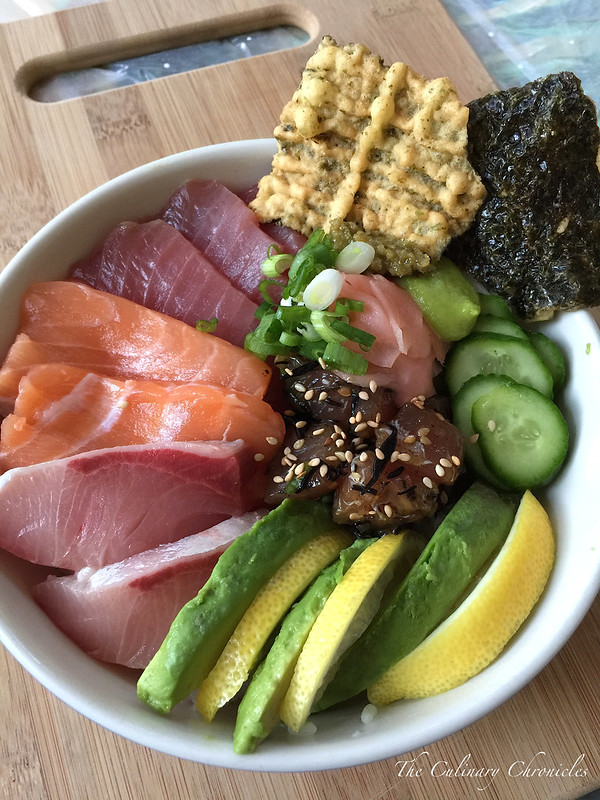 I contemplated writing out a recipe for chirashi but I felt kind of silly doing it.

But again, chirashi can be anything you’d like my Friends. Just be sure to use sashimi grade fish ❤