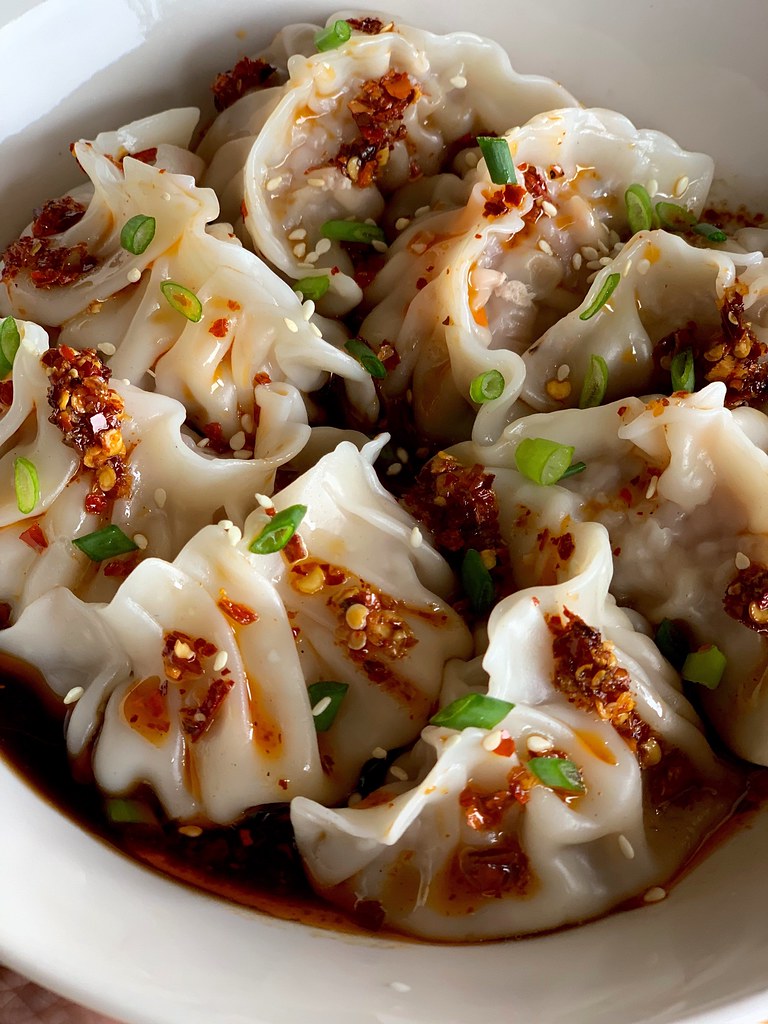 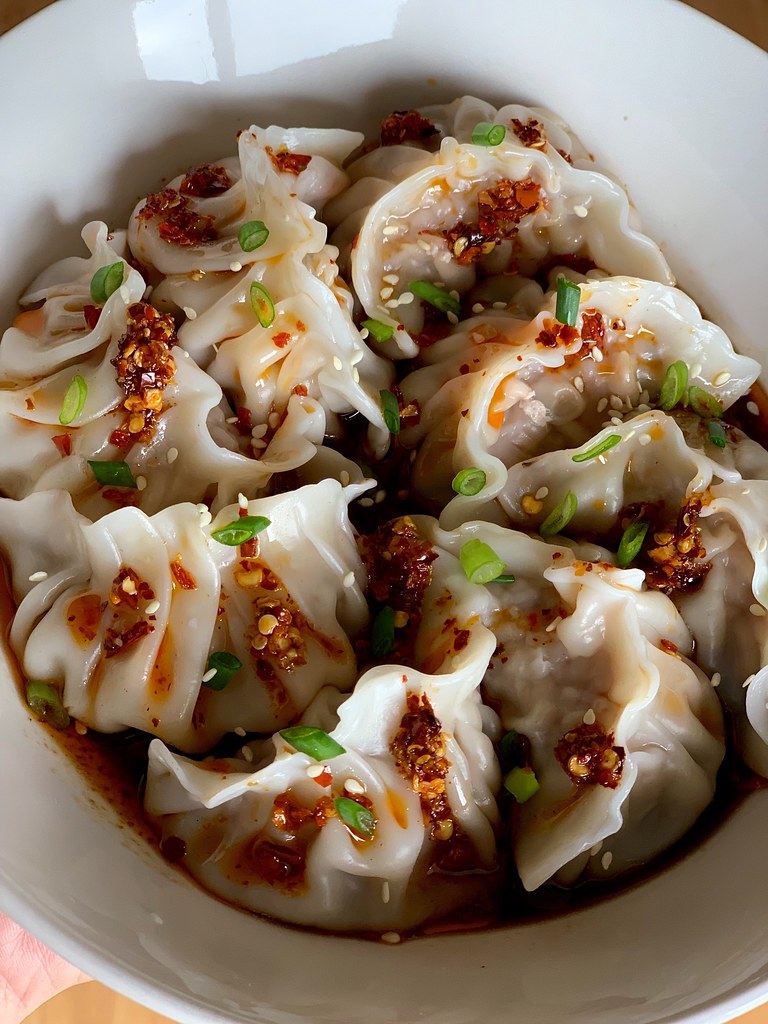 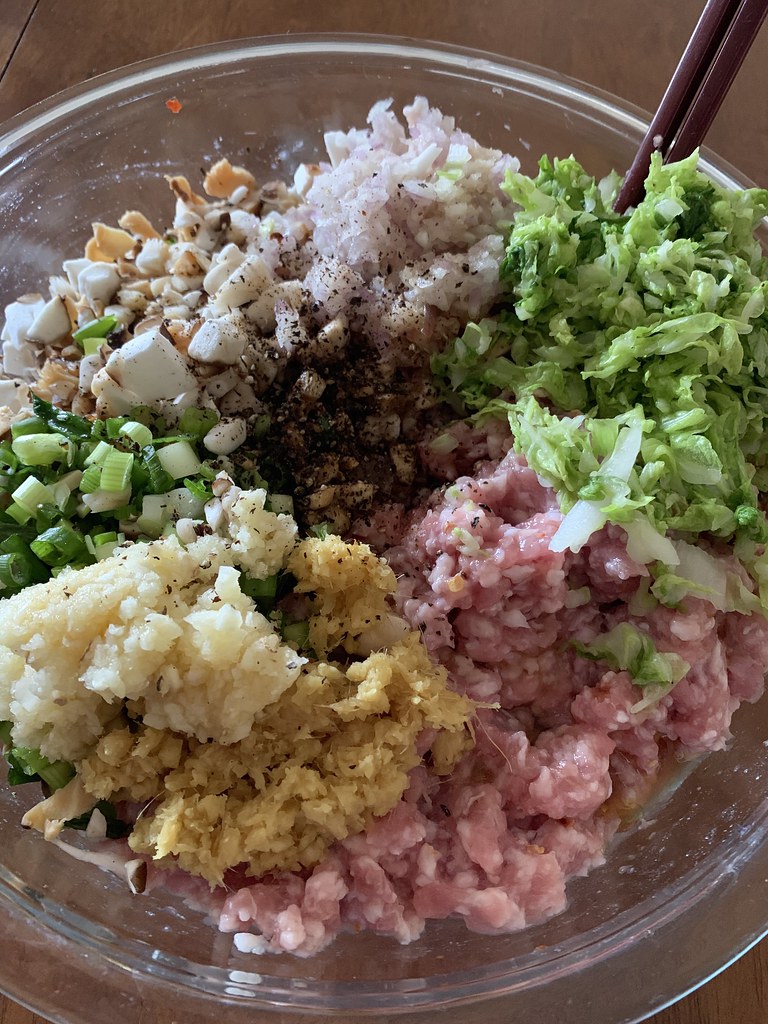 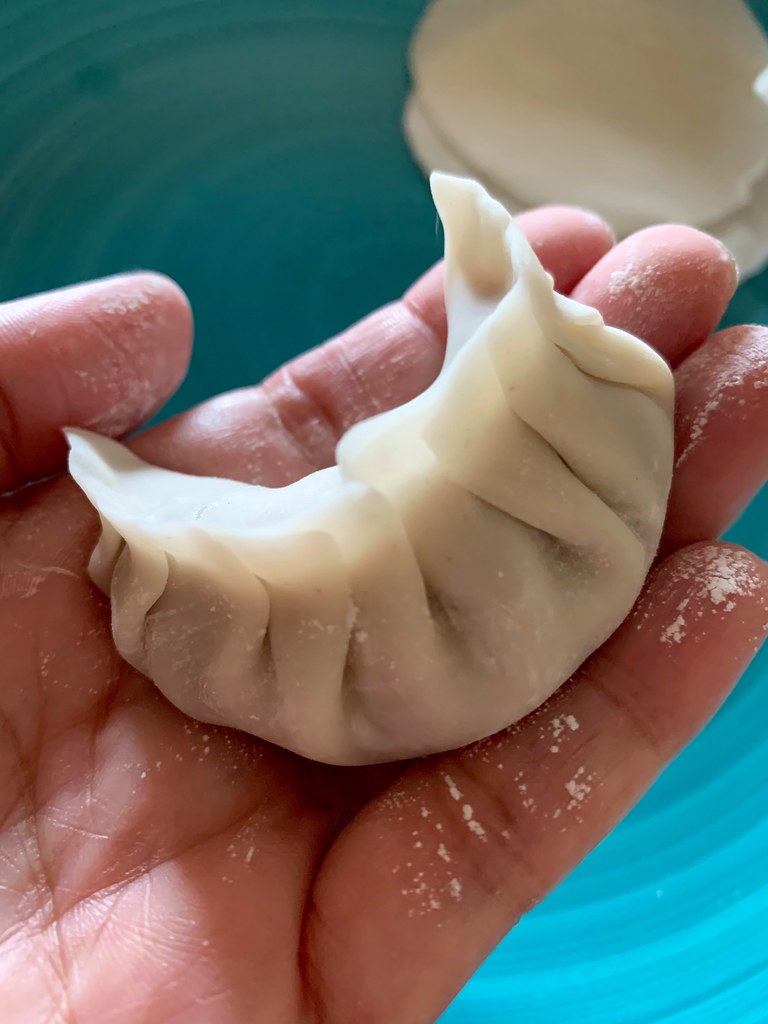 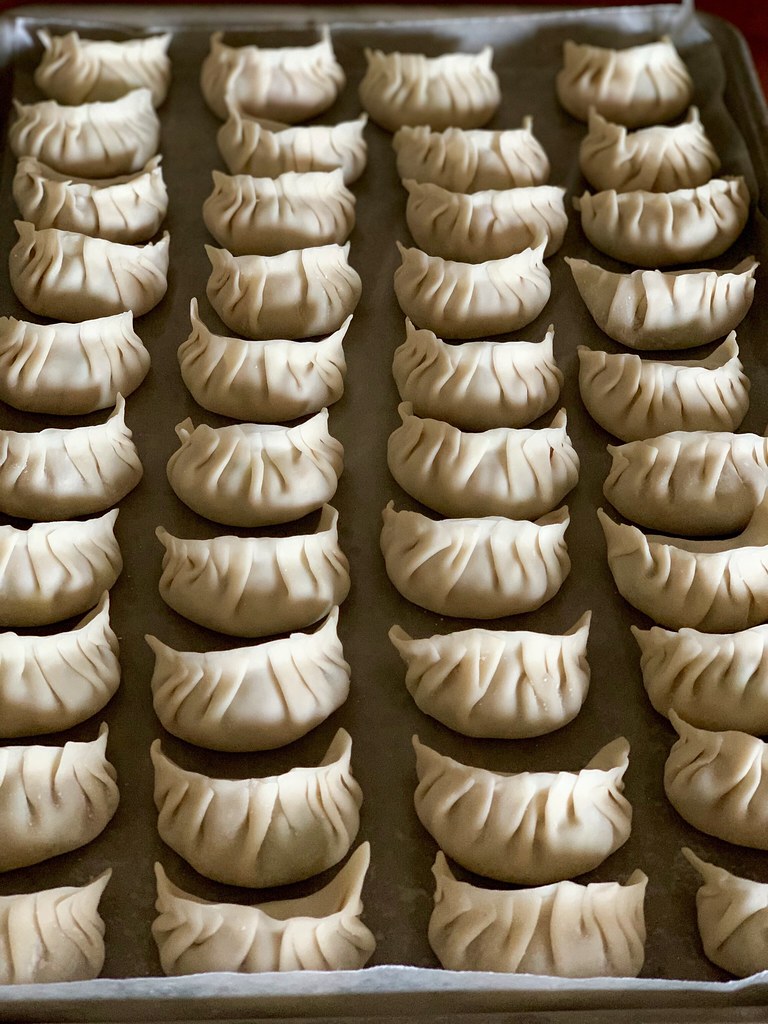 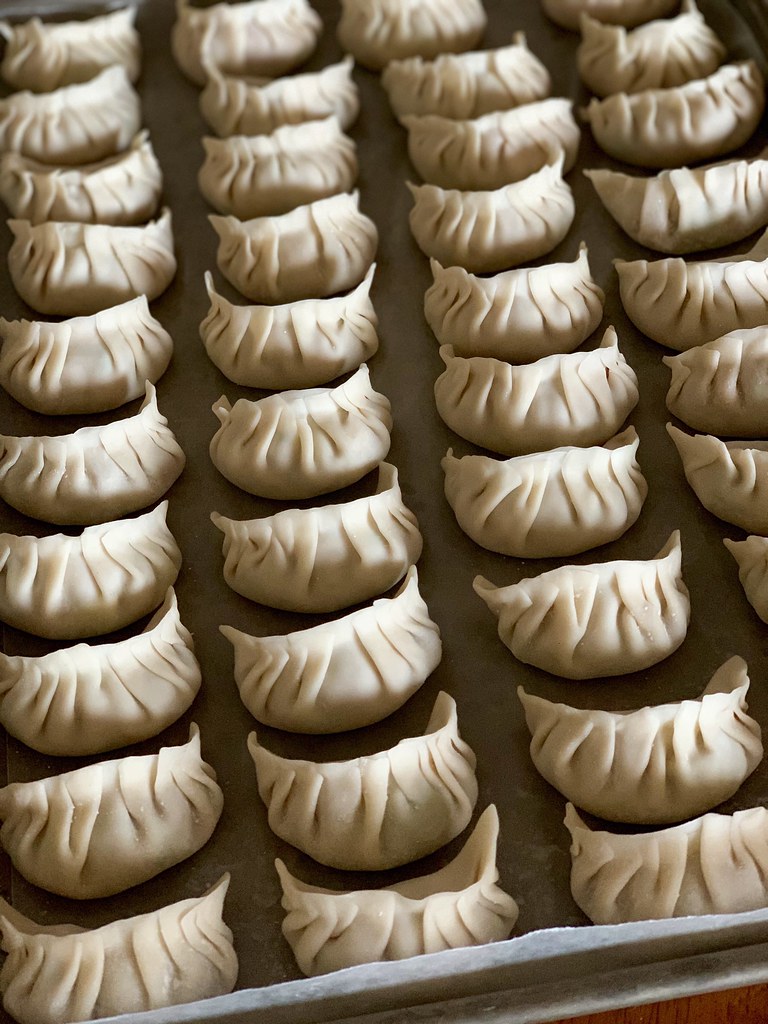 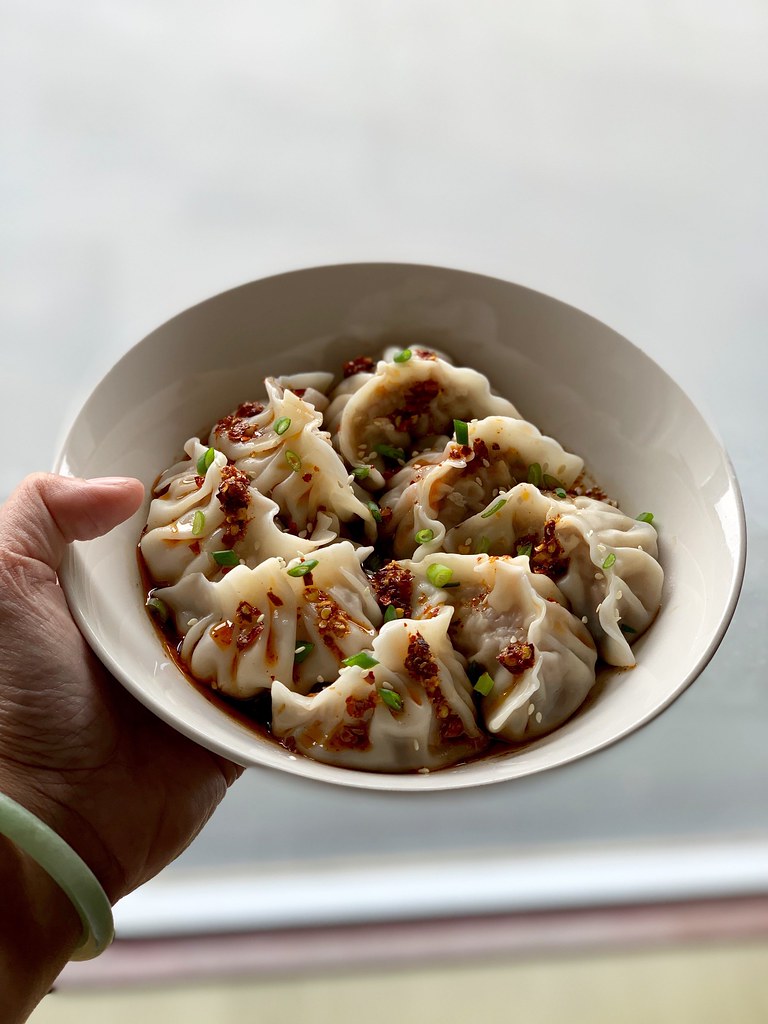 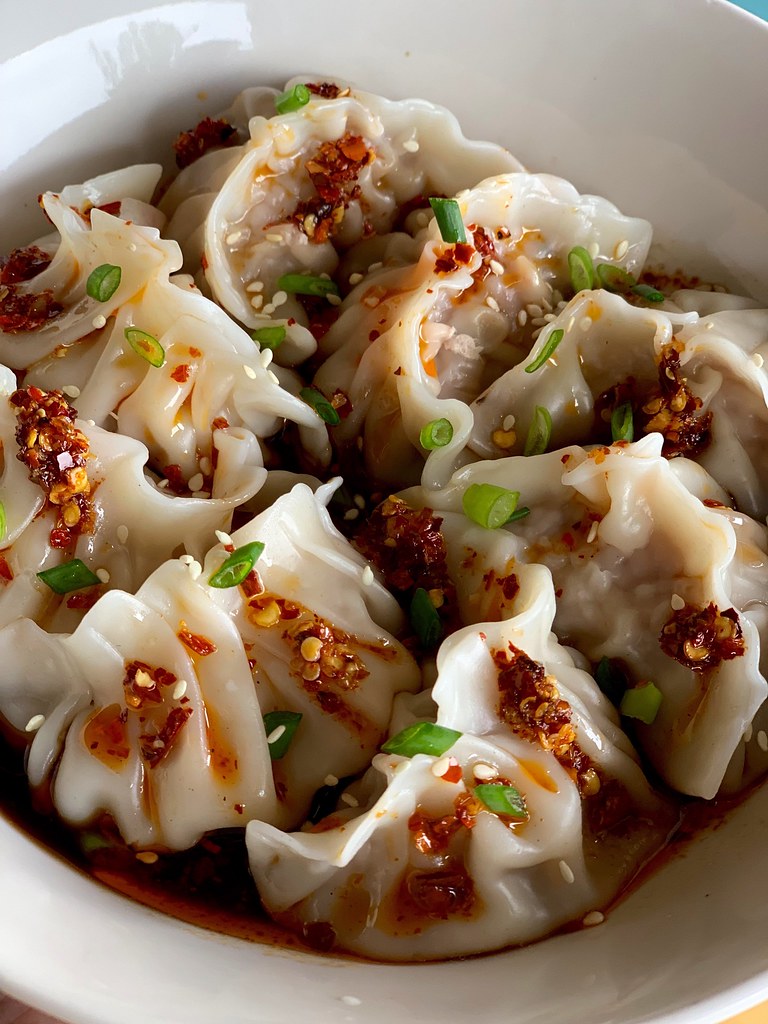 One of the neatest things about our family dinners is seeing how accomplished my neices have become in the kitchen. We got them involved quite young with baking, creating their own pizzas, and so forth—and I think that it’s really helped them become more at ease with cooking.

Fast forward to today where Nina (14 years old) and Nini (13 years old) have developed their own specialities in the kitchen. Nina can whip up a wonderful dressing and a to die for chocolate cake. Nini is a whiz at shucking oysters, cupcake decorating, and quite recently has become a dumpling-making pro.

With the endless things that had to be done at our last family dinner, I needed some help finishing the Gyozas. I showed Nini only once how to fold a Gyoza and the next thing I knew it, she had completed an entire tray of dumplings for me–and they were perfect!

Gyozas are the Japanese version of delish panfried dumplings. They can be filled with a variety of proteins and are wrapped with thin dumpling skins made from flour, salt, and boiling water. Here’s how I make them:

Start off by creating the filling. I like to do a Vietnamese-Japanese fusion and mix ground pork, roughly chopped shrimp, shiitake mushrooms, fish sauce, soy and a variety of other aromatics and spices. The shrimp adds a slight sweetness and great texture. Once the filling has been thoroughly mixed, it’s time to assemble the gyozas.

Place one gyoza wrapper on a flat surface. Dip your finger in water and moisten the edge of the wrapper. Place 1 heaping teaspoon of the filling in the center. Be careful to not over stuff your dumplings or else the filling will burst from the seams.

Pick up the gyoza and fold it in half.

Um…I really should have gotten a manicure before I took these pics.

Start pleating the top layer of the gyoza wrapper. After each pleat, fold, and firmly press the edges together, ensuring that that the gyoza is well sealed.

Place the gyoza on a baking sheet that has been sprinkled with either flour or cornstarch to prevent them from sticking. Cover the sheet with a dish towel while you finish making the rest of the gyozas.

After the gyozas have been pan fried, serve them up with a soy-vinegar sauce or my preferred sauce– ponzu.

These gyozas have a wonderful flavor and all of your loved ones will gobble them up. And if given the chance, get the kids involved and exposed to the cooking process. They’ll have a lot of fun and take pride that they are eating what they helped to make.

I wouldn’t be surprised if, like our aunties, we can retire from cooking duty soon so that the kiddos can take over. Now if we could only get them as excited to do the dishes.

To make the gyozas, lay one gyoza wrapper on a flat surface. Dip your finger in water and moisten the edge of the wrapper. Place about 1 heaping teaspoon of the filling in the center. Pick up the gyoza and fold it in half. Pleat – fold – and press the edges together, ensuring that you seal the gyoza tightly. Place the gyoza on a baking sheet sprinkled with cornstarch or lined with parchment paper to avoid them sticking to the pan. Repeat until all of the filling has been used.

Heat a large frying pan to medium heat with vegetable oil. Place a layer of the gyozas in the pan. Fry the gyozas for 1-2 minutes until the bottoms are golden. Add about 3-4 tablespoons of water and immediately place the lid on the pan. Lower the heat to medium-low and allow the gyozas to steam until almost all of the water has evaporated.

Remove the lid, turn the heat back up to medium and lightly drizzle sesame oil around the inner edge of the pan. Continue cooking until remaining water has evaporated. Plate and garnish with chives or scallions. Serve immediately with ponzu sauce.