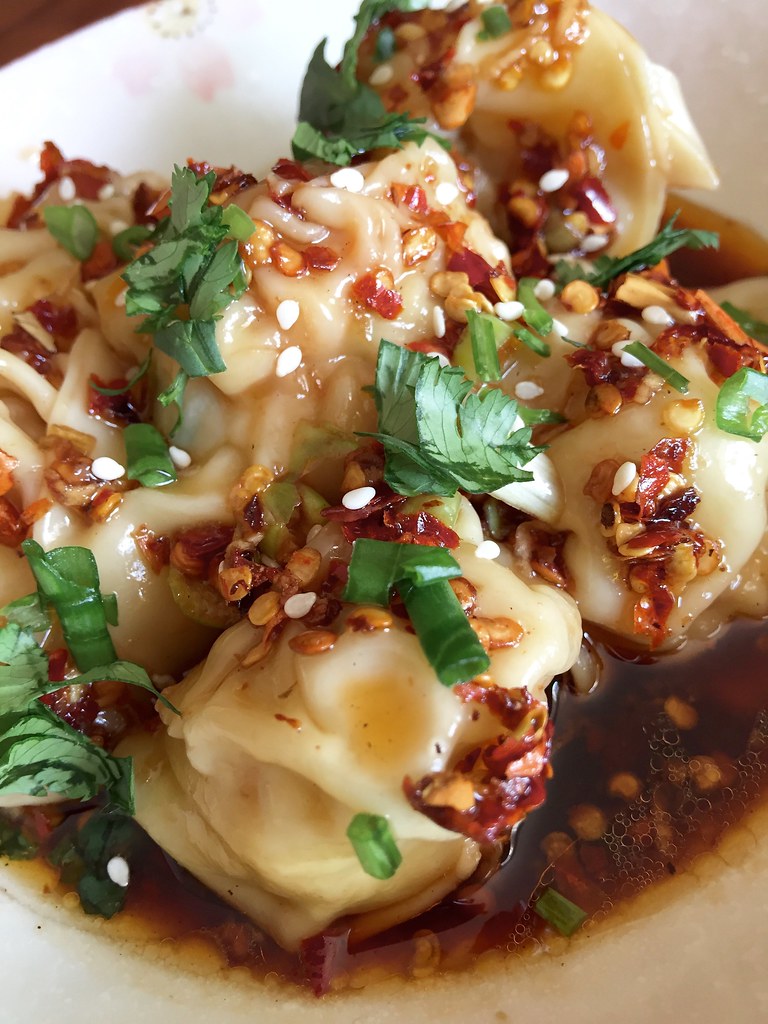 Friends, today is the beginning of Tết – the Vietnamese Lunar New Year!

As with every new year, I’ve done all the rituals like scrubbed down the house, prepared an altar of traditional Tết goodies and went to the bank to get crisp “new money” to stuff all the bags of lì xì for the munchkins. 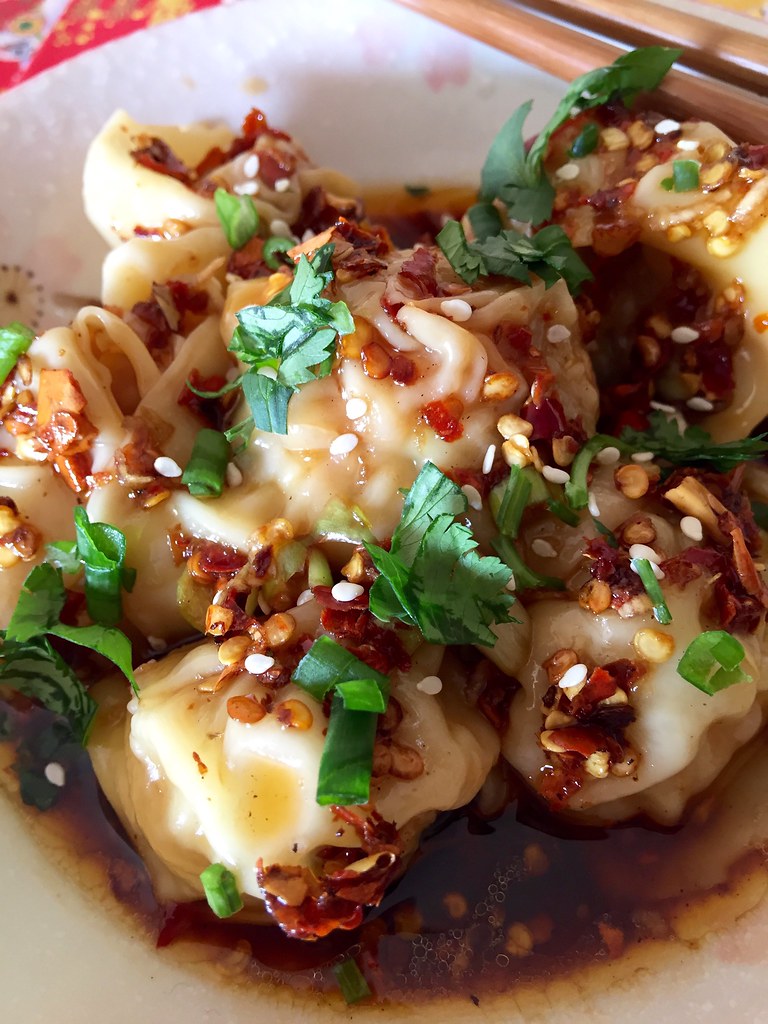 Man…I miss the good ol’ days when I was the one collecting stacks of lì xì. Now, Cô Nam just doles out the red envelopes.

Being a grown up is seriously overrated. But at least there’s still all the good food! 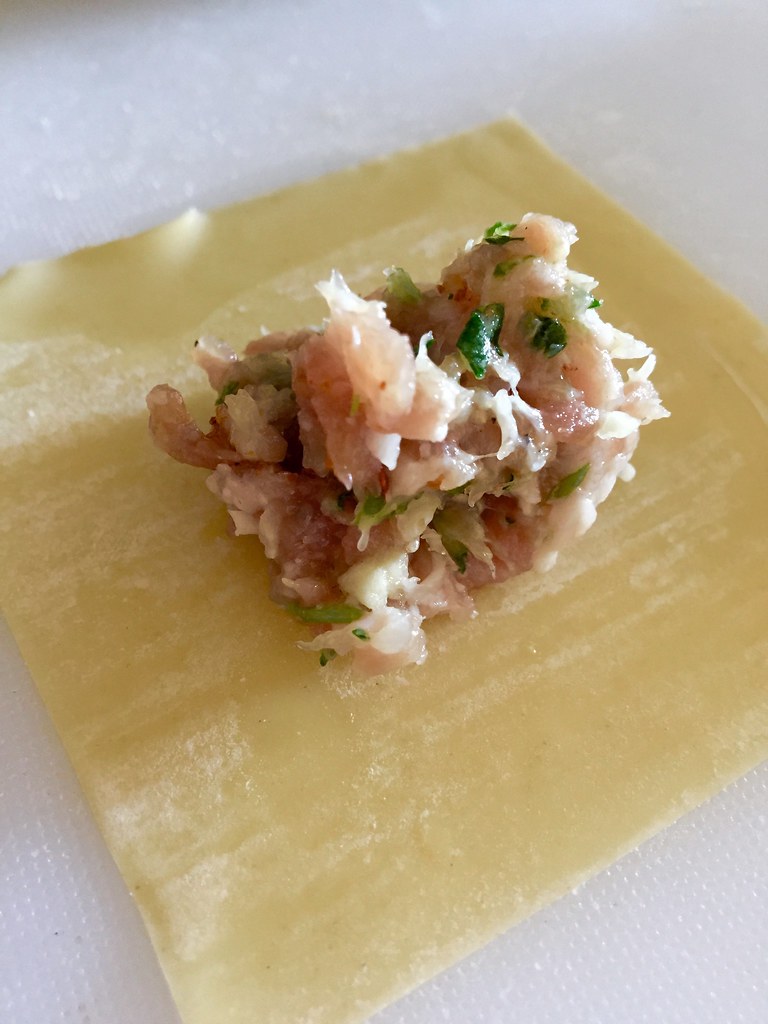 Every year I look forward to eating copious amounts of fried Bánh Tét with Dưa Món. Bánh Tét are steamed sticky rice cakes and are cylindrical in shape. Bánh Chưng are essentially the same but are shaped as squares.

The savory ones are filled with pork belly and mung beans. Although they can be eaten just as is, I prefer it fried so the crust is nice and crispy but the interior is still soft. SOOOOO good! And of course, it’s best eaten with a side of Dưa Món – pickled veggies. 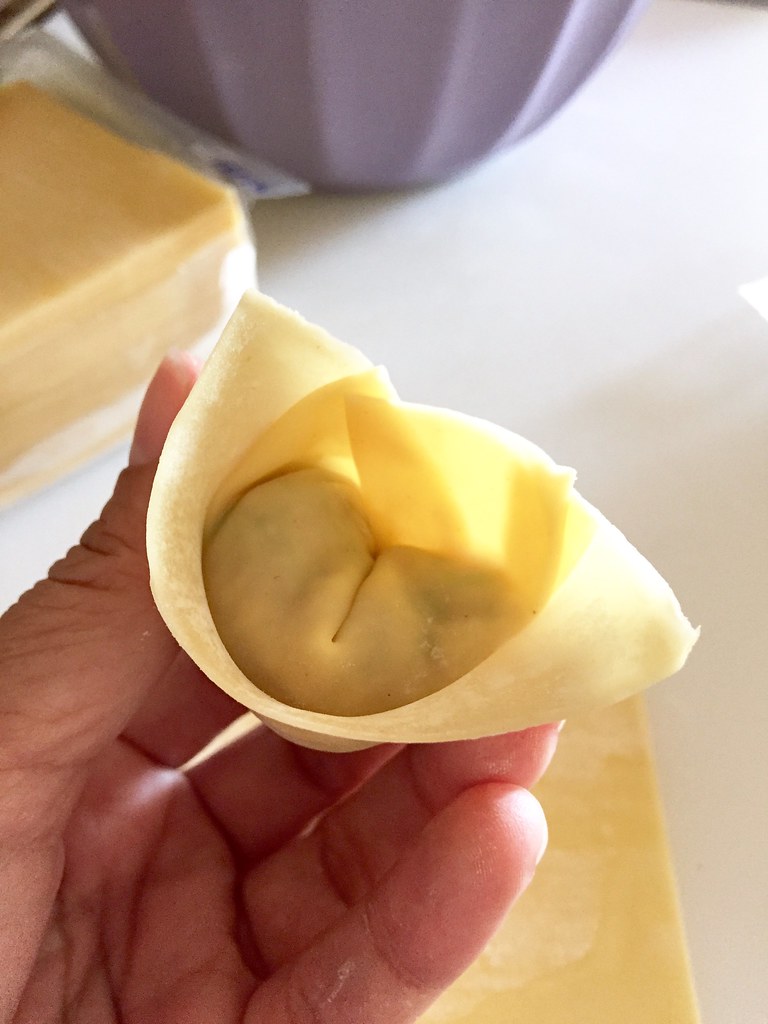 Bánh Tét/Bánh Chưng are not something my family make—well, at least not since I’ve been alive!

It’s REALLY a time consuming process and it’s one of those things that if you’re going to go through the efforts to make a few, you might as well make 100. But that would take you foh-evah!

So like most Vietnamese folks nowadays, we buy ours. But we still like to cook other traditional Tết dishes. 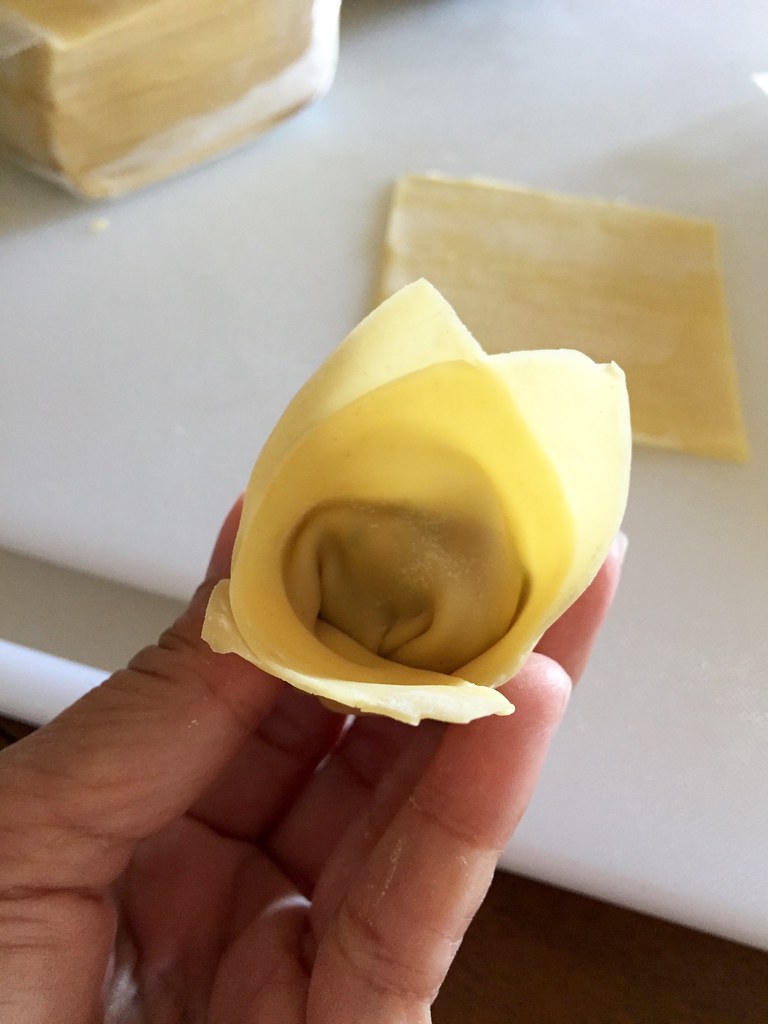 But as I’ve gotten older, I’ve started to include some dishes in my yearly rituals that we didn’t grow up eating for Tết. And dumplings definitely top that list!

Sure, our Chinese kin definitely prepare and eat a variety of dumplings as a part of their Lunar New Year traditions. They’re eaten for luck because they symbolize wealth and richness as their shape resembles Chinese gold ingots.

But hey–if it can bring luck and taste delicious, why not adopt the practice, right? 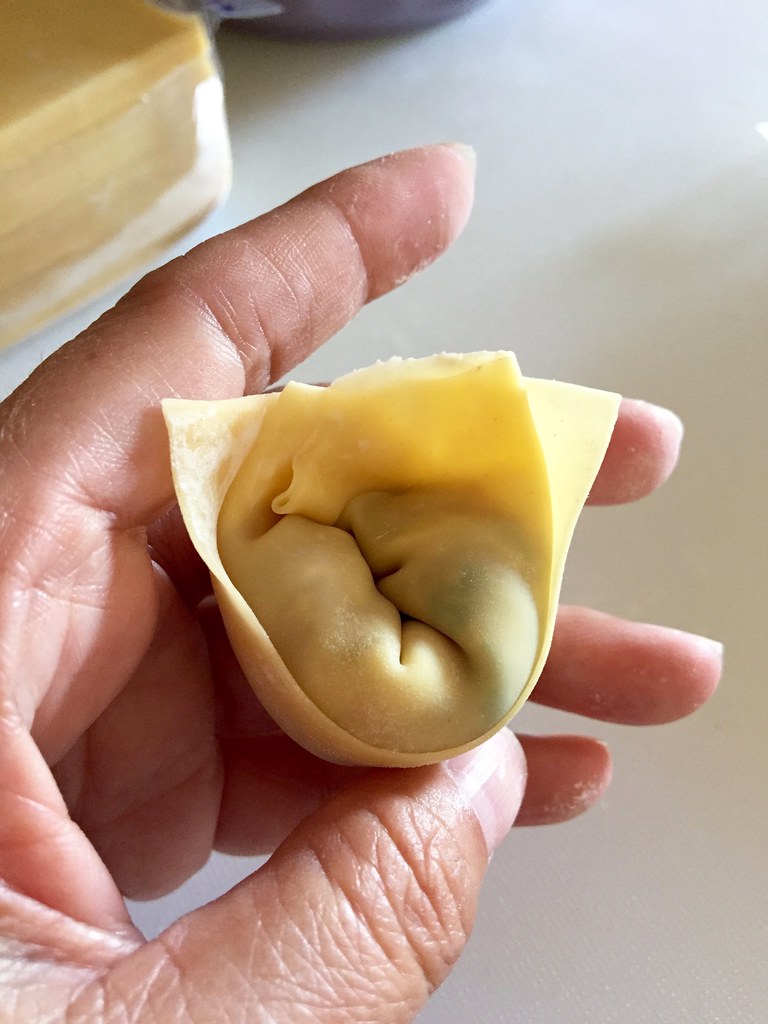 I’ve shared a few of my favorite dumpling versions with you before like: 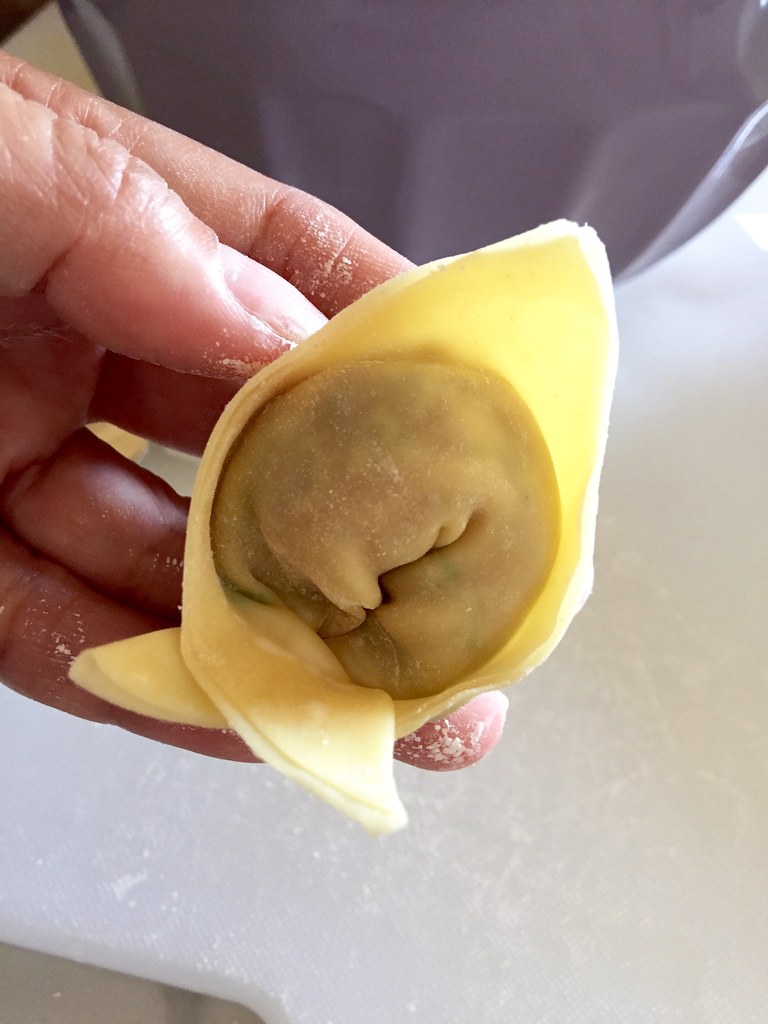 But for this year’s Tết, I thought I would share with you my Sichuan Wontons with Chili Oil Sauce.

But what’s the difference between a dumpling and a wonton?

Honestly I’ve found that the answer changes depending on the person you’ve asked. But generally folks tell me that dumplings are often quite plump and are steamed or pan-fried. Wontons are most often boiled and served in soups or a broth. The wrappers (or skins) are also supposed to be really thin and since they aren’t filled as much as the former, it allows the soup/broth/sauce to stick to the excess dough. That way, you can just slurp them up!

Oh…and some say that wontons only use square wrappers and dumplings use a round shape. But really… you can call them whatever you want —because I’ll take ANY version of them. 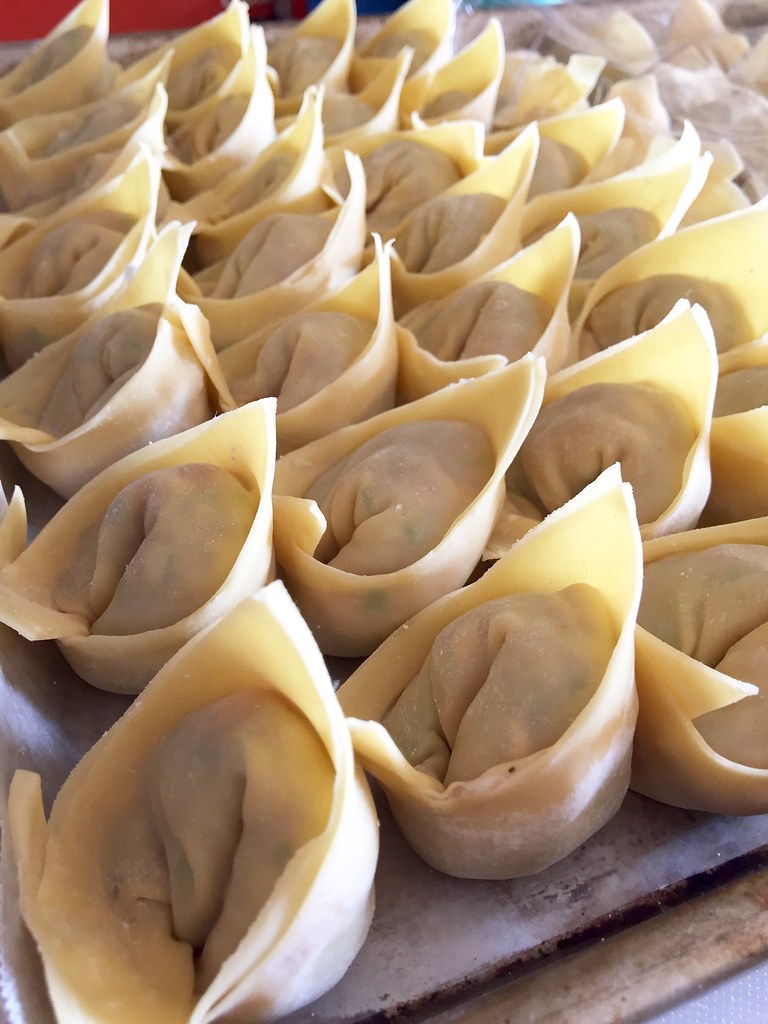 These Sichuan Wontons are filled with a 1:1 ratio of pork to shrimp. And unlike my other dumplings, I don’t add much filler other than aromatics. No cabbage, no mushrooms—just protein and few other things.

Because the co-star of this dish truly is the Chili Oil Sauce that it’s pretty much bathed in. The sauce starts off with my homemade Sichuan Chili Oil. Does it have to be homemade? Well…technically no. But it makes SUCH a difference. And not only is my recipe super easy but it lasts a long time in your fridge!

The chili oil is then combined with soy, Chinese black vinegar (there’s really no substitute for it), sugar and a couple of other items. Simple right? That’s because the homemade oil is so aromatic that it needs very little else! 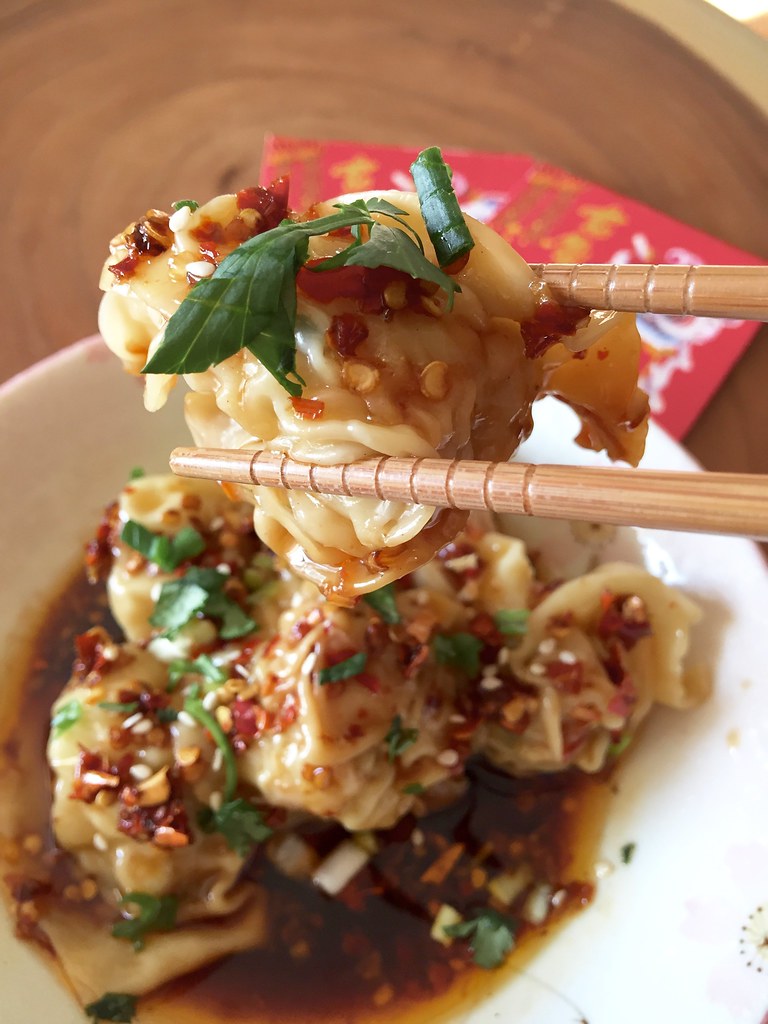 And if you’re REALLY fiery, after you’ve sauced the wontons, you can add a few extra dollops of the Sichuan Chili Oil everything. You can sure bet that I do—but perhaps dial it down a bit if you’re serving little ones.

There are also several different ways to fold wontons as I’ve shown above but I generally just go for the standard “ingot” fold as I’ve described in the recipe. 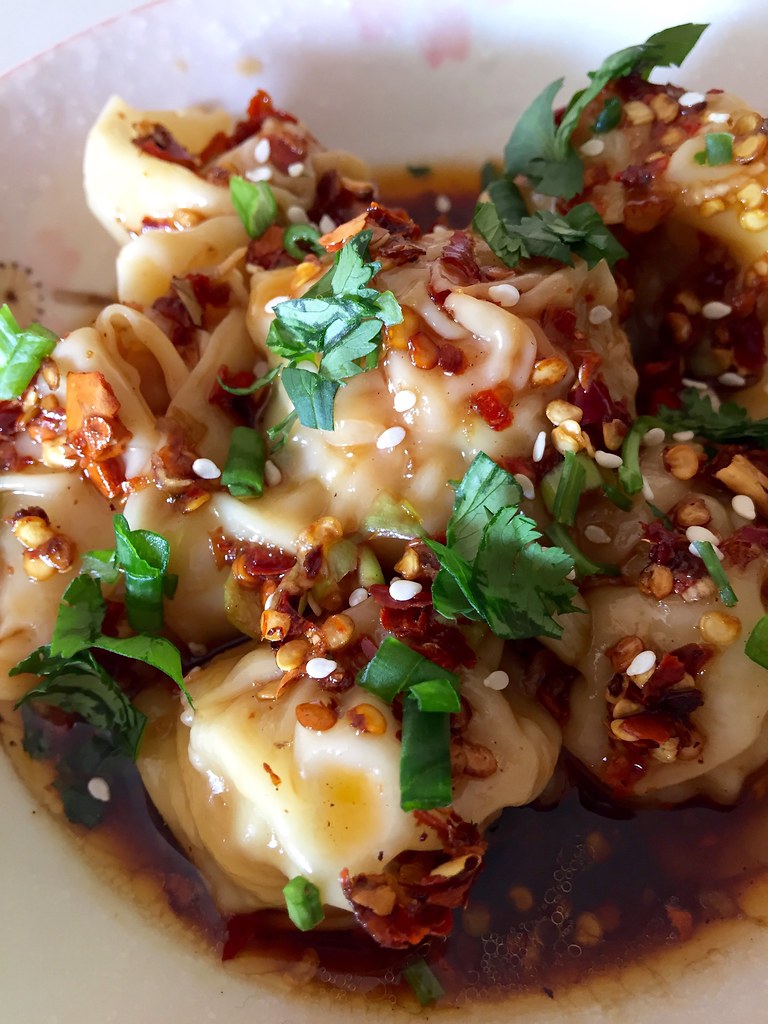 And with that dear friends, let Bella and I wish you all Chúc Mừng Năm Mới!!! May the Year of the Dog be filled with happiness, good health, prosperity and endless Foodventures!

ps. Bella believes EVERY year is the Year of the Dog.

Place the scallions, ginger, cloves, shallot and cilantro in a food processor. Pulse several times until all of the ingredients have broken down and become roughly the same minced texture. Add the shrimp and pulse until everything has combined and the shrimp has turned into somewhat of a paste. Add the pork, Shaoxing wine, soy sauce, fish sauce, sesame oil, sugar and pepper. Pulse just until the ingredients have fully combined.

Begin assembling the wontons. Place one wonton wrapper down on a flat surface so that it points towards you. Dip the tip of your finger into water and moisten the top two edges of the wrapper. Place about 1 heaping teaspoon of the filling in the center of the wonton wrapper. Fold the bottom corner (the one nearest you) over the filling so that it meets the top point and forms a triangle. Press down to seal the edges of the triangle while pressing out any air that may have been trapped inside. Add a dab of water to the two outer corners of the triangle and fold in so that they meet. Press corners together to firmly seal. Place the wonton on a baking sheet and continue until all the filling/wrappers have been used.

Prepare the sauce by whisking all the ingredients together in a bowl until the sugar has dissolved. Set aside.

Bring a large pot of water to a boil. Add the wontons to the pot (no more than a dozen or so at a time) and lower the heat so that it’s at a steady but not rapid boil. Constantly stir so that they do not stick together. Allow the wontons to cook for about 3 minutes or until the wrappers become translucent and the filling has cooked through. Use a large slotted spoon or kitchen spider to remove and drain the wontons. Transfer to a serving dish and spoon the sauce over the wontons. Garnish with scallions, cilantro and sesame seeds. Serve immediately. 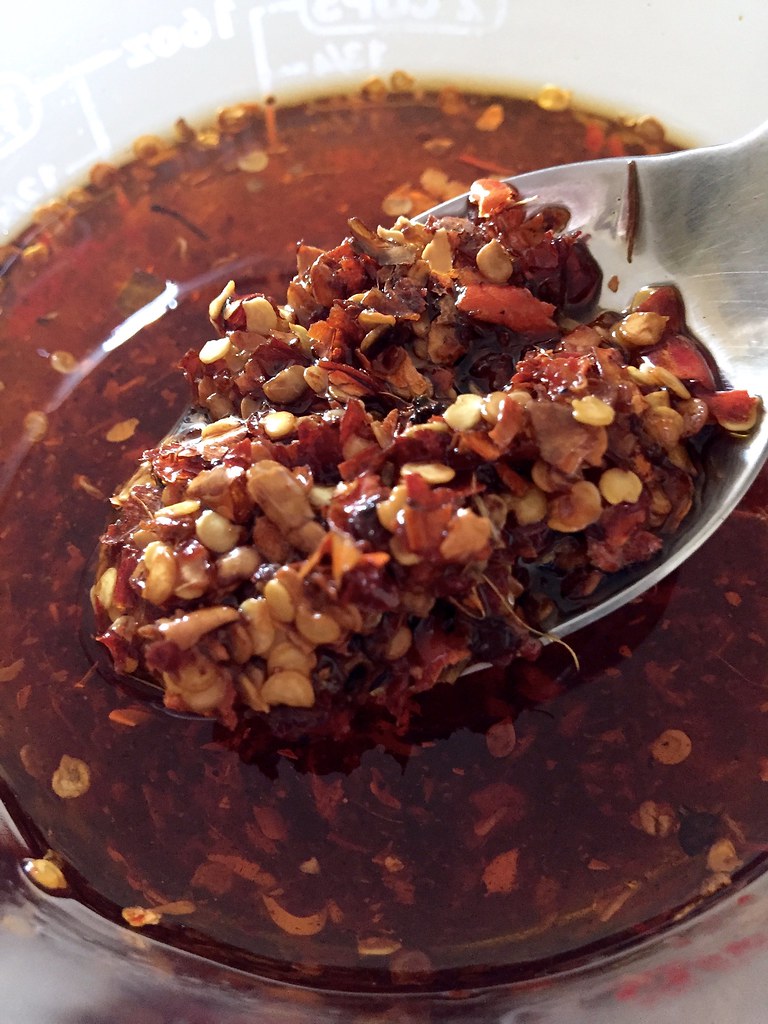 But this kitchen staple plays a big part in a recipe I’ll be posting soon in honor of Tết – the Lunar New Year that will arrive on Friday. 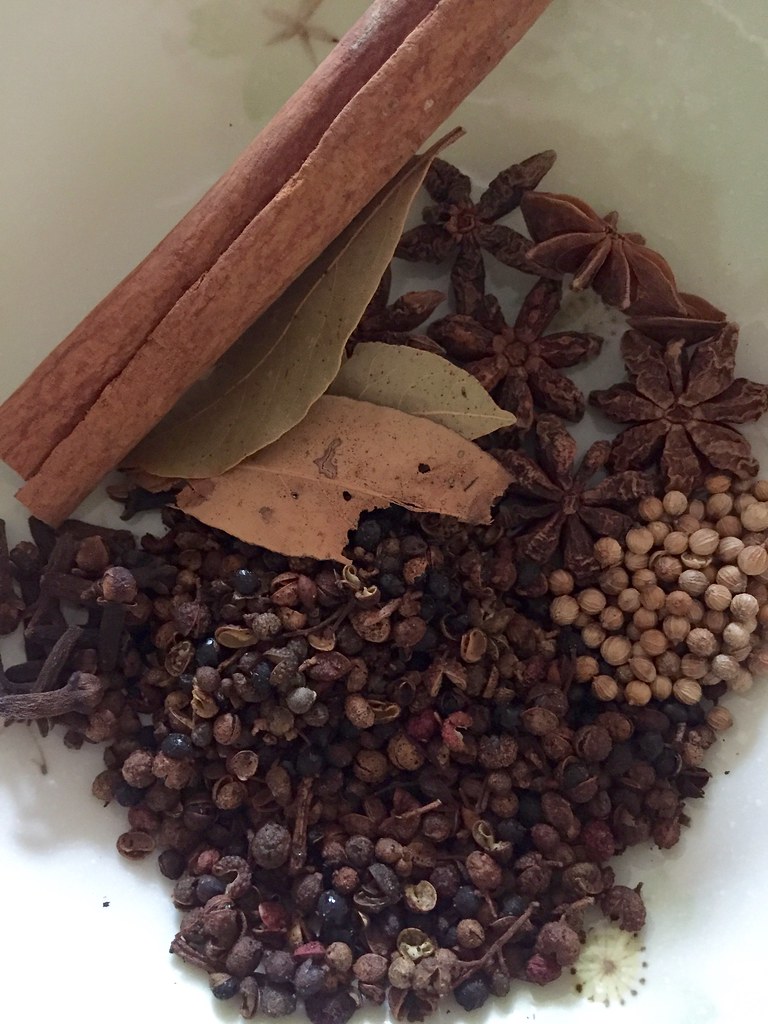 Chili Oil, or in this case Sichuan Chili Oil, is a regular in many Asian cuisine recipes. I use it quite often in soups, stir-frys, dumplings, or as a stand-alone condiment. 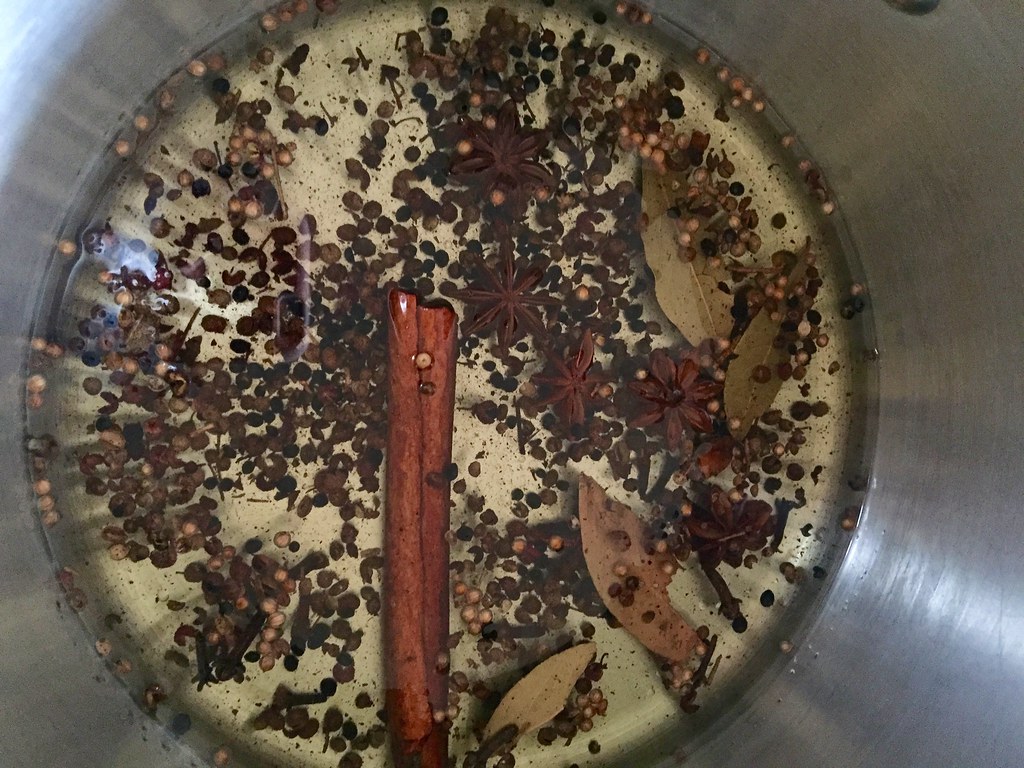 And although there are many different jars of it that you can easily buy, homemade is always better–and it’s super easy! 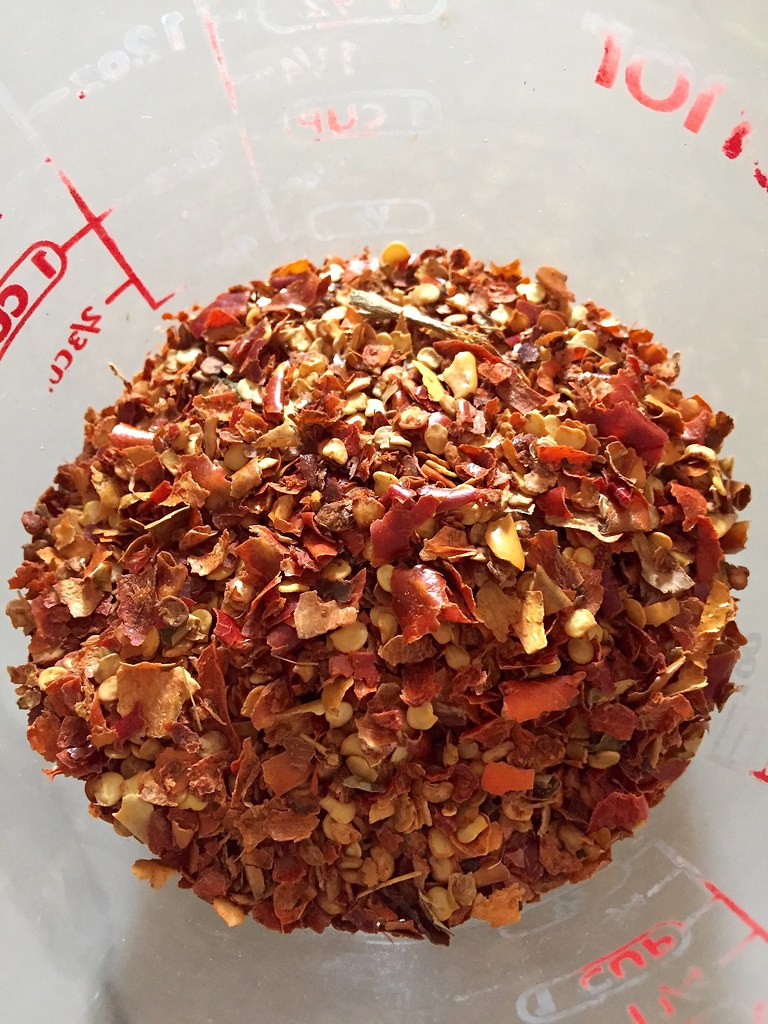 The core of this is the use of whole Sichuan peppercorns that can be easily found at most Asian grocery stores or online. The peppercorns are fragrant and carry a wonderful heat.

To start, the Sichuan peppercorns and dried spices are slowly heated to infuse the oil. 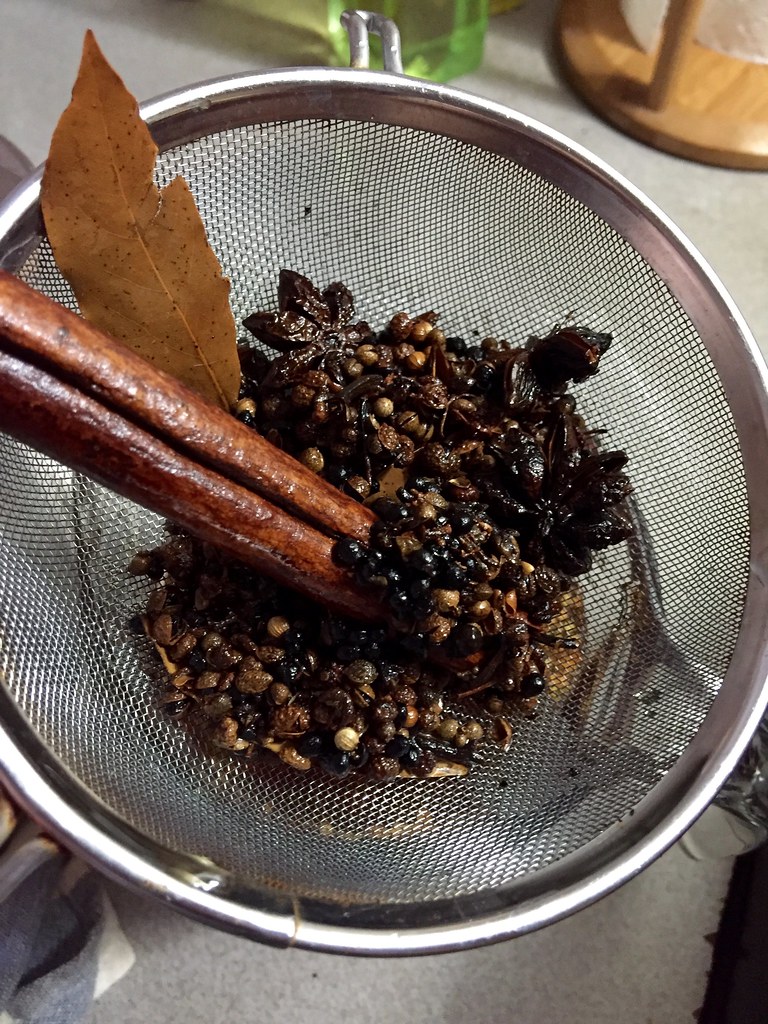 After about an hour, the whole shabang is poured over chili flakes and a bit of salt—and boom! 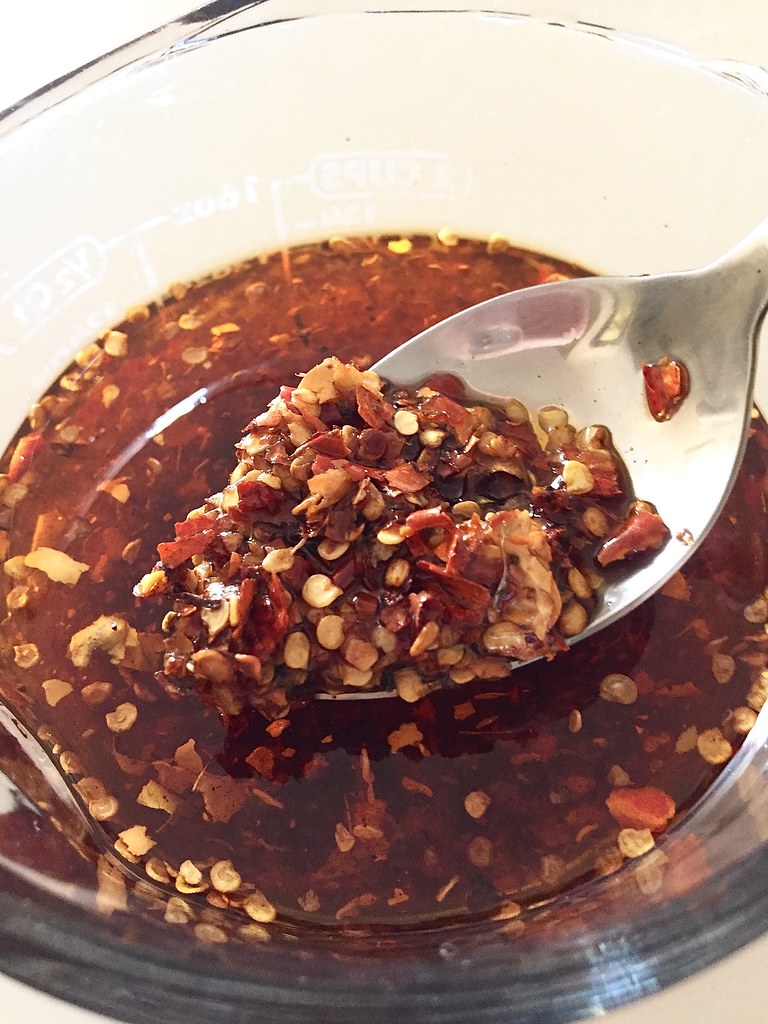 The oil can be kept in your fridge for a year—but I doubt it’ll keep that long!

Pro Tip? Double the batch and give some away as gifts!

In a small stainless steel* saucepan, heat the peppercorns, coriander, cloves, star anise, bay leaves, cinnamon stick and oil over medium heat.  Once the oil begins to bubble, bring the heat down to low. Allow the oil to infuse over low heat for one hour, stirring every 5-10 minutes. The aromatics should not get too dark so you’ll need to adjust the heat as needed.

After an hour, add the garlic and ginger and raise to medium-low heat. Allow it to bubble and infuse for an additional 2-3 minutes and remove from heat. Allow the oil to cool for 1-2 minutes.

Place the salt and chili flakes in a heatproof bowl and place a strainer on top. Slowly pour the infused oil through the strainer. Remove the strainer and discard the spices. Stir the oil well and allow to cool completely before transferring it to a jar or other container. The oil can be stored in refrigerator for a year.

*You’ll want to use a light bottom pan so that you can see if the oil and spice are getting too dark.