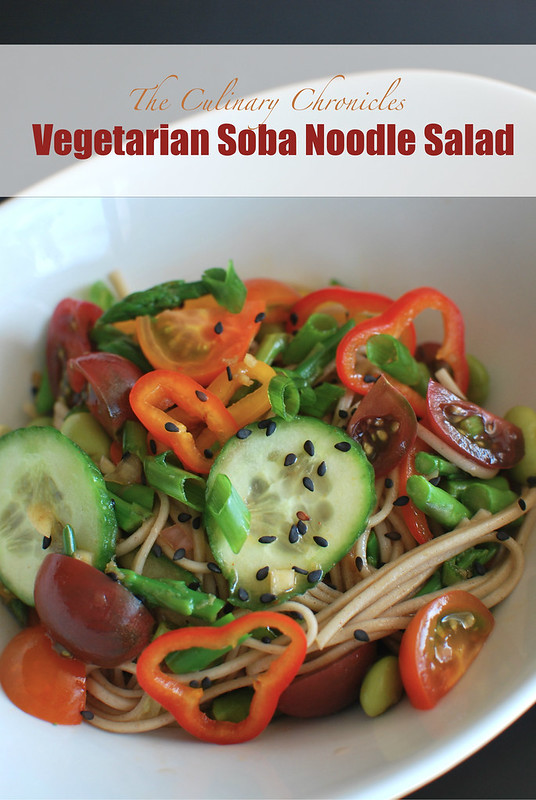 Guys… I moved to Việt Nam.

Okay, not really. But I swear, San Diego these past few weeks have been as hot and humid as South East Asia in the dead of Summer!

And turning on the oven or kitchen burners has been the last thing I’ve wanted to do. But a girl has got to eat and the lighter and easier the dish–the better! 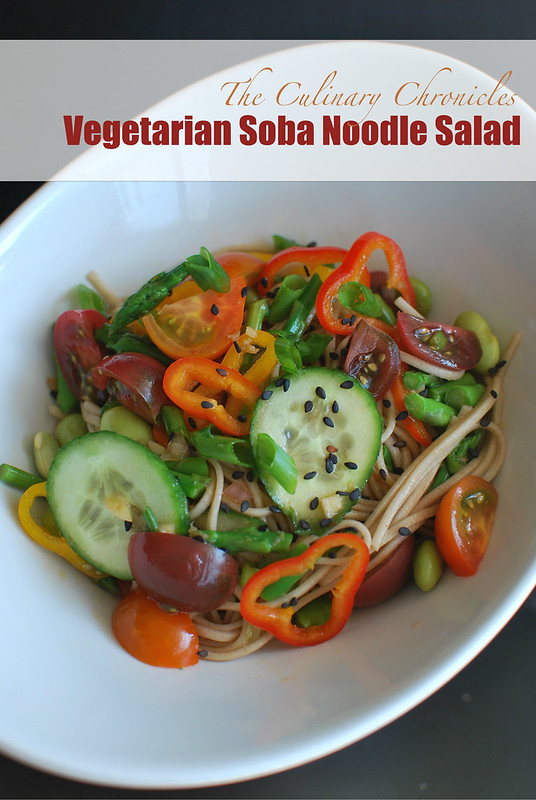 Quick and light bites like this Vegetarian Soba Noodle Salad is the perfect remedy to combat the heat. Soba (buckwheat) noodles tossed with fresh veggies in a bright and acidic ponzu sauce is easy to make and doesn’t leave you feeling like gazillion pounds.

I opted for a vegetarian take but if you miss the meat, throw in such grilled chicken or shrimp and you’ll be a happy camper.

Now excuse me as I pass out in front of the air conditioner.

Prepare the vinaigrette by whisking all the ingredients in a small bowl. Season with additional kosher salt and black pepper as needed.

Bring a large pot of water to a boil and cook soba noodles for 3-4 minutes or accordingly to package instructions. Drain the soba in a colander and rinse well with cool water. Shake off excess water and transfer to a bowl. Add all the vegetables to the noodles, except the scallions. Add several spoons of the vinaigrette over the noodles and vegetables and toss well. Add additional vinaigrette as needed for everything to be lightly coated.  Divide the contents between two serving dishes. Top each plate with scallions, sesame seeds and enjoy!

In 2006, I spent a whirlwind 5 days experiencing Japan.

Not knowing when the next opportunity would arise for me to visit the country, I was determined to see, feel, experience, and of course EAT as much as I could.

Over the course of 5 days, I visited the cities of Kobe, Osaka, Tokyo, Hiroshima, Kyoto, and Kishigawa. That’s  over 1,200+ miles back and forth—-thanks to my Japan Rail Pass.

I attended a major league baseball game, walked around the Hiroshima Peace Park and Atomic Bomb Dome, traversed the busy subways & shops of Tokyo, prayed in shrines, sang at a karaoke bar, stayed at a hostel/ryokan, got lost—A LOT, biked around the streets of Kyoto, attended a Donjiri Festival, meandered around the different hamlets, and above all –engaged with the people of Japan. Needless to say, I barely nicked the surface.

But by far, my most precious memory of Japan was when I met Yushiko in Kyoto. That day, my friend Kate and I rented rickety old bikes to explore the old imperial city. As we were wandered around a part of the city infamous for old temples, we spotted a tiny, older woman sweeping the steps of a temple. She looked up as we went by and smiled. After exchanging a few greetings, she stopped and pointed to me and said “Japanese?” I said no, and responded “Vietnamese”. She laughed and began trying a few words in English. It turned out that the “temple” was not a temple at all but was her home. We later discovered that Yushiko was 94 years old (though she looked at least 15 years younger than that!) and that the home belonged to her late husband’s family line.

Yushiko invited us to come in and to view her garden. I was floored and so excited by her generosity. At one point, she motioned us to go through this old wooden door through a stone wall. We didn’t know what to expect but as I pushed the door which looked like it hadn’t been used in years, tears swelled up in my eyes. It was amazing– just as how I would have imagined the “Secret Garden” would look like. It was so peaceful and serene. Kate and I stayed in there for a few minutes just marveling at the beauty around us and feeling so lucky that this kind soul had invited us into her home.  We stayed and chatted with Yushiko for nearly 30 minutes and although she said she was “too old” for us to take photos with her– I just know that I will never forget her face and the precious time we spent with her.

A quick snapshot of Yushiko’s garden and home. Trust me, the photo does not do justice at all.

Of course it just wouldn’t be me if I didn’t mention any of the food we encountered during my time in Japan. And OH…THE…FOOD.

Noodles, Sashimis, Bento Boxes, Donburis, Sweets, Sakes, and snacks of all kinds. Oh man….my mouth is watering just thinking about it all.

Since we’ve been having such warm weather lately and because my travel bug has been itching like crazy, I decided to make one of the dishes I ate a ton of when I was in Japan–Soba.  Soba are noodles made of buckwheat flour and can be served either hot or chilled–-Zora Soba is my personal preference.

At the heart of Zaru Soba is the tsuyu–or dipping sauce. The tsuyu is a pungent mixture of dashi, shoyu, and mirin but its strong flavors matches so well with the mild soba noodles. You can definitely make your own dashi broth but I kind of “cheat” and use instant packets. Go ahead…judge me all you like 🙂

Zaru Soba is typically served with tons of nori, scallions, and wasabi. I also like to have a side of tempura with it for a offset of temperature and crunch. Oishii!!!

But one thing is for certain….Whether hot or chilled, loud slurping while eating your Soba is mandatory. True Story.

<Sigh>….I miss Japan. And until I can find my way back to the beautiful country, I will have to console myself with Nihon goodies such as ramen and this soba.

And for the immense generosity and experiences I had in Japan–-Arigatou gozaimasu!

Snapshot of me on a bridge in Kyoto after a full day of biking around the town.

Prepare the tsuyu. In a small saucepan bring the water to a slow boil. Add dashi soup stock and simmer for 4-5 minutes. Add shoyu and mirin and simmer for an additional 2-3 minutes. Remove from heat and cool.

Meanwhile, bring a large pot of water to a boil and cook soba noodles for 3-4 minutes or accordingly to package instructions. Drain the soba and rinse well with cool water. Shake of the excess water and plate the noodles. Top with nori and serve with scallions, wasabi, and tsuyu.