I have dreamed of having my very own Le Creuset Dutch Oven for a long time. And for a “long time”, I mean longer than I even knew what it really was or how fabulous they really were. I think the first memories I could recall of it was back in the day when “The Frugal Gourmet” had one on his stove in the 80’s. And although as a kid I thought it was just a “pretty pot”, I knew I wanted one when I grew up.

As I grew older and found out how much they actually cost, I could not bring myself to buy one. This is not to say that I didn’t think it was worth it but a few hundred bucks is pretty steep! Alas, I had to be content to utilize my siblings’ when the chance arose.  🙂

But this past Christmas…my Culinary Life changed when my awesome sister gave my boyfriend and I a gorgeous 7.25 quart round Dutch Oven. I squealed in delight as I hugged our new beauty—finally, we had one of our very own. Dreamy.

Then the next question arose….what were we going to make to break in our new dutch oven??? As silly as this may sound, I wanted a recipe that would require us to utilize as many components of the pot as we could—searing, braising, roasting, sautéing, etc. Heck, it was the first time we would be using it after all! 🙂

I finally settled upon a recipe by Bobby Flay for a Short Rib Ragu with Pappardelle. Although I have NEVER been a fan of how Bobby Flay portrays himself on television, his food more times than not, looks delish.

We followed the recipe with the exceptions a few edits and were happy to find that it was pretty simple (although somewhat laborious and lengthy). The end results? D-E-L-I-C-I-O-U-S. The ribs were succulent and tender with the aromatics giving the meat a rich flavor.

A few things about our take on the dish:

I would definitely recommend this recipe and will make it again (with a few tweaks). If you’re planning on tackling this one, keep in mind–it needs at least 3 hours in the oven for the ribs to get tender. It’s okay though, time goes by quickly if you have a snackie and a glass of vino. 🙂

Browning the ribs. The more brown bits the better! 🙂

Cooking down the Shallots and Mirepoix 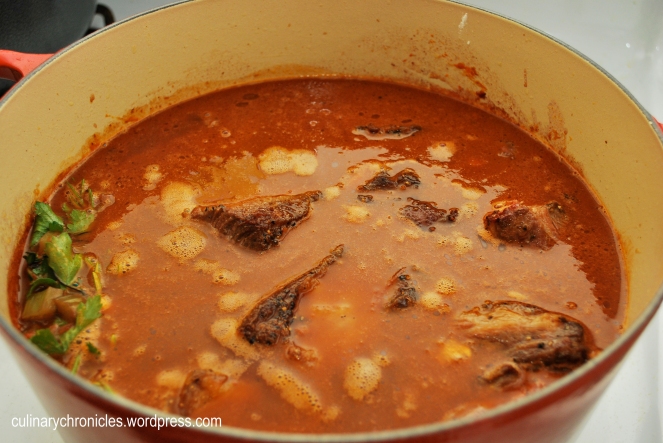 Short Ribs back in with the liquids & bouquet garni and ready to be put in a 325 degree oven for 3 hours. Yup, I said THREE! 🙂 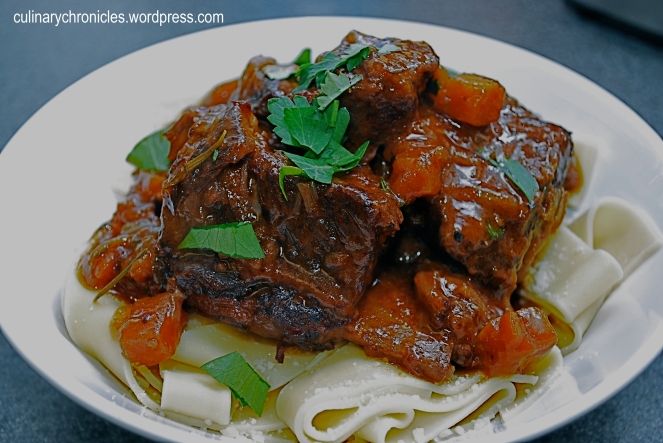 The finished Short Ribs (with bone -in) over Pappardelle. Garnished with Pecorino Romano and Flat Leaf Parsley.

Did I mention how much I LOVE our new Dutch Oven! And yes, it really does make a difference! 🙂