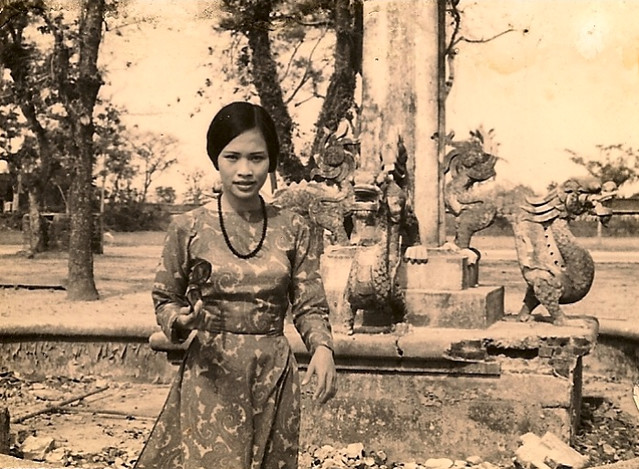 It’s May 10th which means it’s not only Mother’s Day but also, our Mom’s Birthday!

She would have been 74 this year (eek! She’s probably yelling at me for disclosing that!) but I’m quite certain she would have looked no older than maybe 55….ok, may 60 🙂 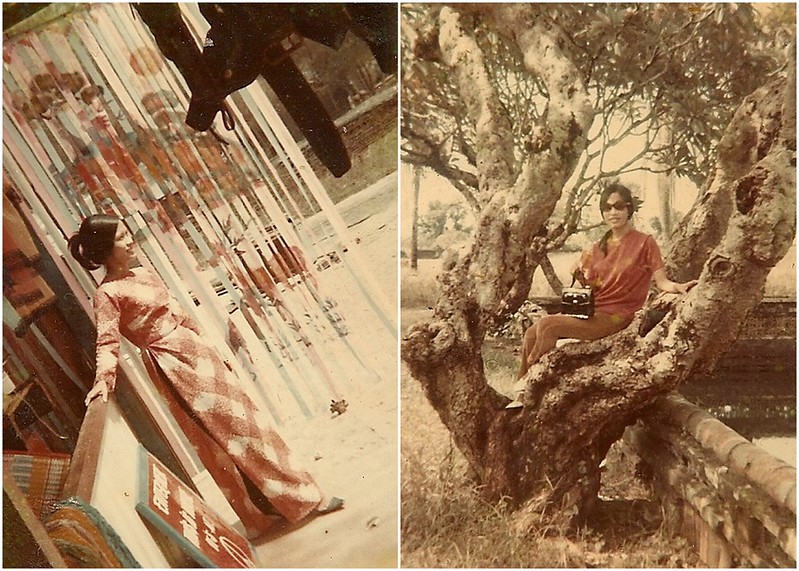 The woman had some crazy good skin! She would often tell me when I was growing up to always use upward strokes when applying facial lotion to go against gravity.

But come to think of it….how does one say “gravity” in Vietnamese again? Eh, I must have just known what she was talking about. 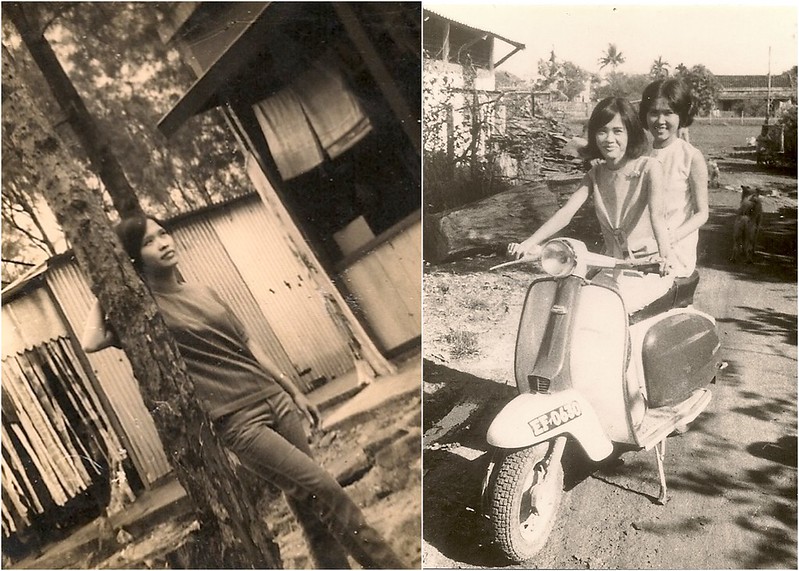 Today started off very much like it has for the past few years on Mom’s birthday. As I’ve written in her birthday posts before, it kicked off with a delish breakfast that I picked up at Panera Bread. When Mom and Dad moved to Florida, they went crazy for Panera Bread and would go weekly for French onion soup and their fantastic egg soufflés.

Luckily, I was able to snag the last Spinach and Bacon Egg Soufflé which was decadently wonderful. 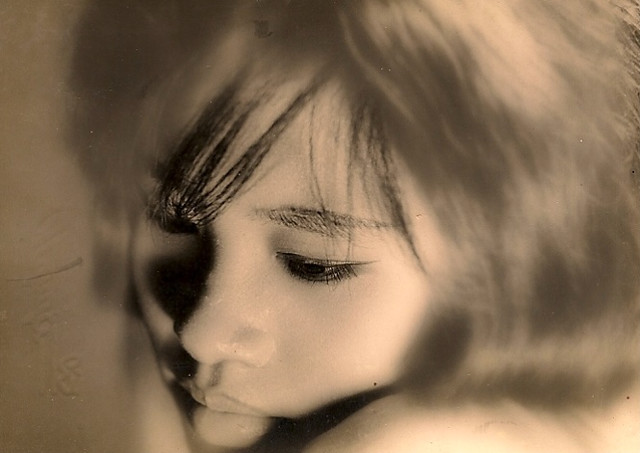 After brekkie I started going through old pics of Mom for this post and couldn’t help but smile. 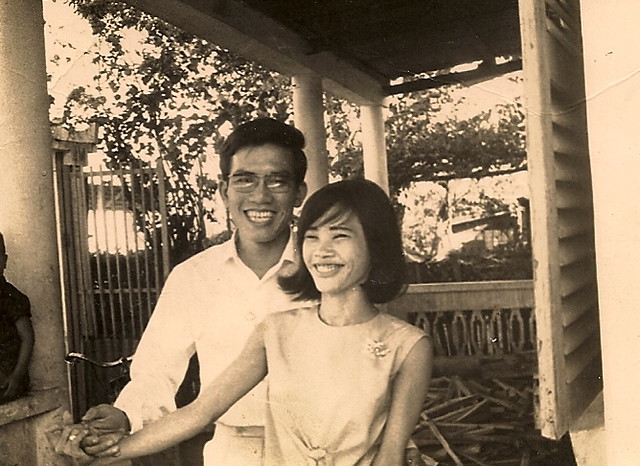 Neither her family or my dad’s were wealthy but she someone how managed to rock it out in the countrysides of  Việt Nam with Sophia Loren style sunglasses, patent leather pumps, itty-bitty mini-dresses and beautifully tailored & formfitting áo dàis. 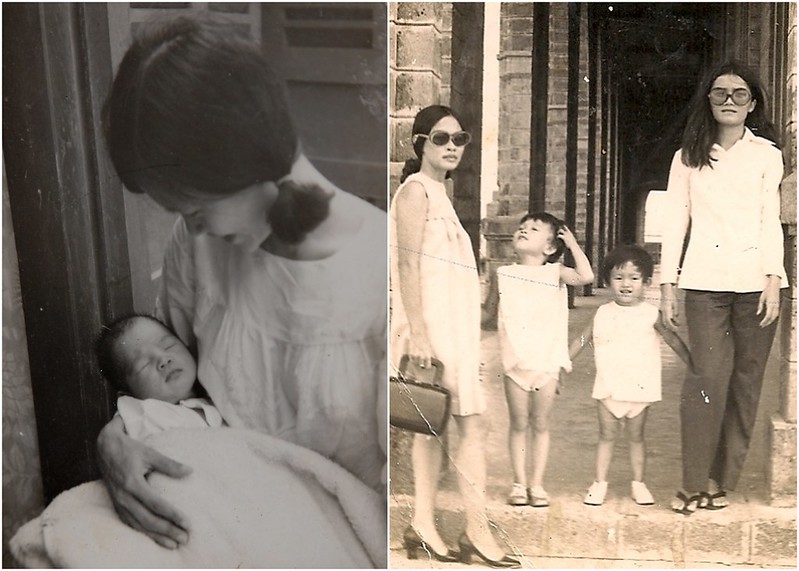 And this sense of style never waned through the years.

To this day, I wonder if Dad ever knew how often Mom would hide her shopping loot in the car or in the back of the closets only to tell him days later when she was wearing the new item that it was actually years and years old. 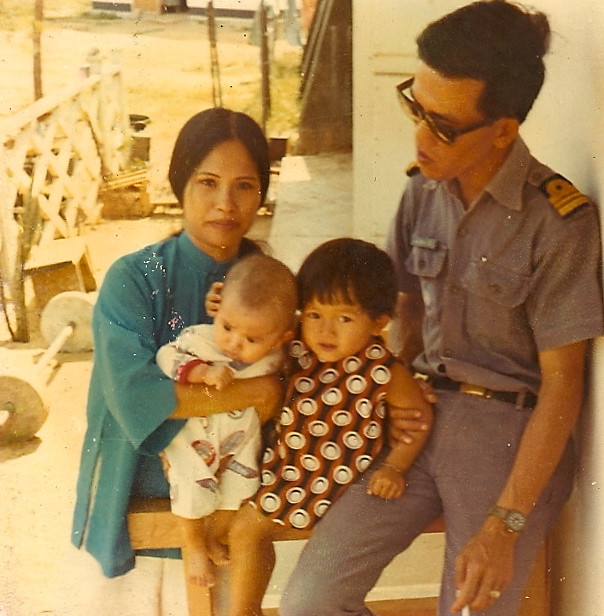 And as you know, Mom was an incredible cook.

I think most people say that about their moms but for reals, ours was awesome. 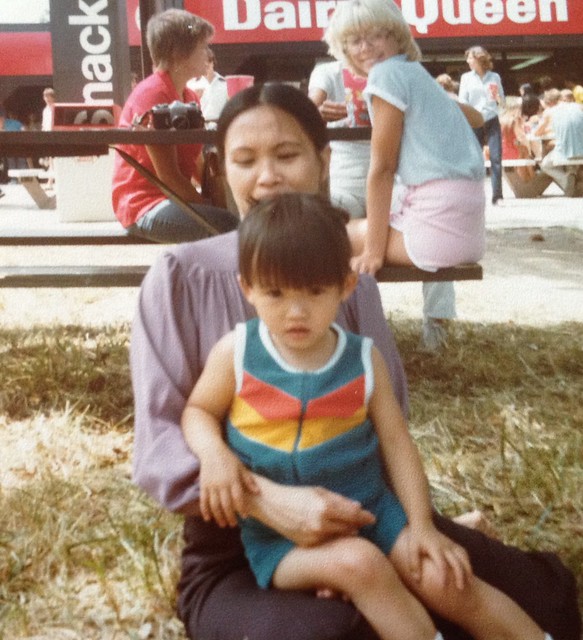 When I shared my Vegetarian Chap Chae recipe a couple of years ago, I talked a little bit about how Mom and Dad went through a major Korean phase. They would watch Korean soap operas/dramas, buy Korean cookbooks, make and jar their own types of kimchees, and of course–go to town on Korean BBQ. 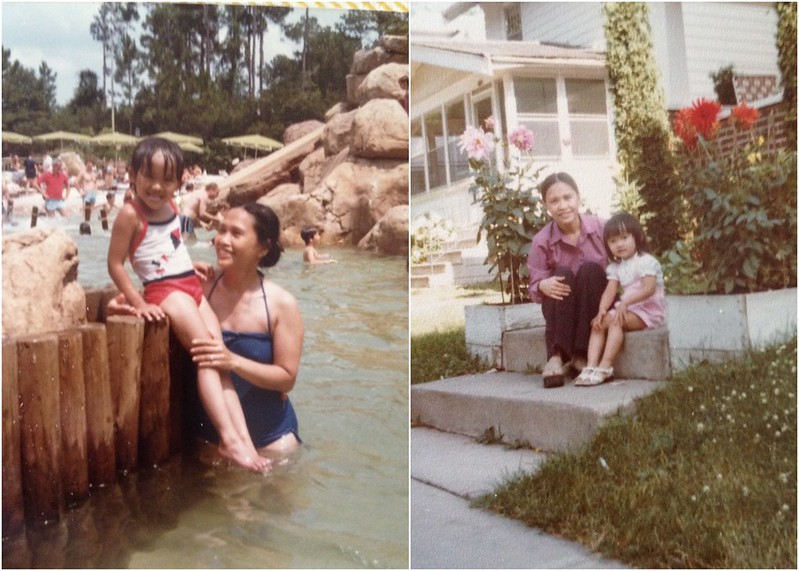 Since I make a steak every year on Mama’s birthday (she was a carnivorous steak-loving 4’9″ woman), I decided to take a Korean spin. When grilling up (or pan-cooking) steaks, I rarely will use a marinade. I think the straight up taste of beef with some salt and pepper can’t be beat.

But this is for Mom and a little variation from time to time is good for you. 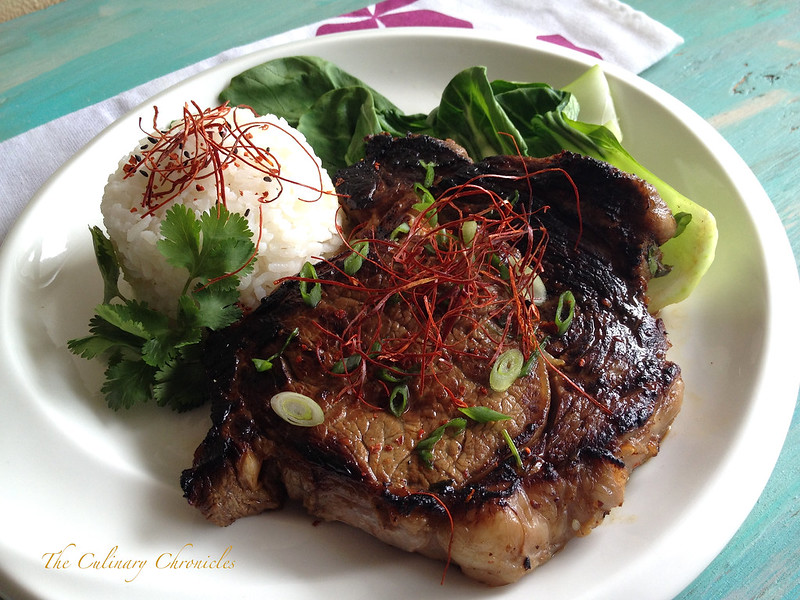 I opted for a ribeye cut (my fav) and doctored some of my go-to Korean BBQ beef marinade. It’s filled with all kinds of goodness like soy, ginger, garlic, fresh OJ, and of course–grated Asian pear. The latter is for some added sweetness and the acidity helps tenderize the meat.

If you want to add a kick of spice, add a few dollops of gojuchang — Korean fermented chili paste. 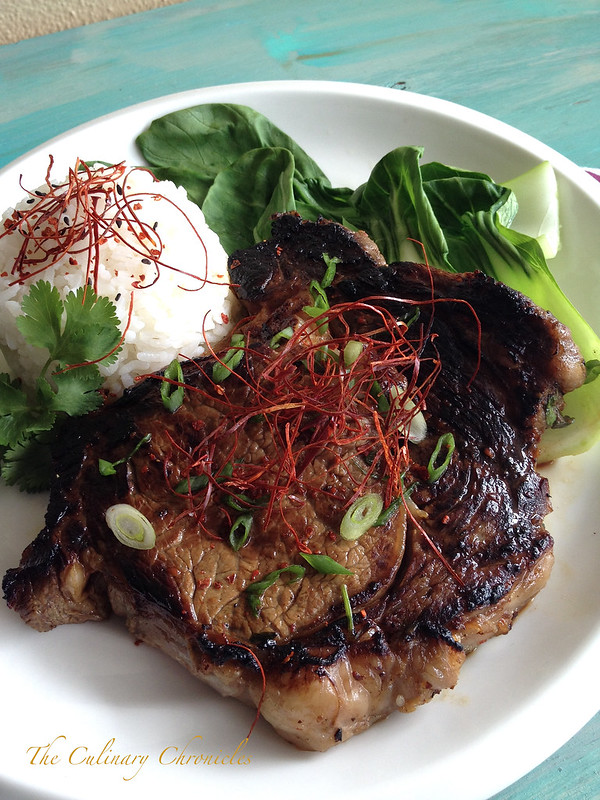 I chose to use a cast iron skillet to cook the steak instead of using a grill because I prefer how the meat caramelizes on the skillet.

But hey– if you prefer, fire up the grill! 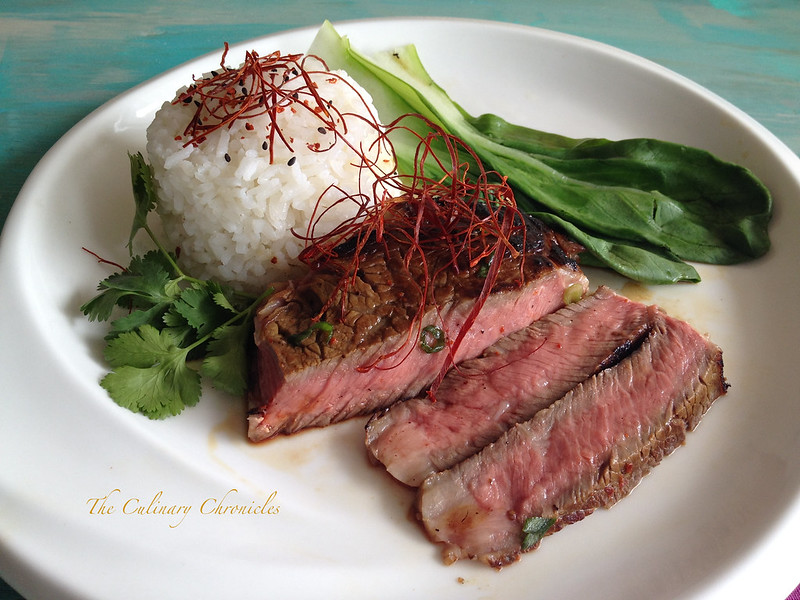 I like my steak on the medium to medium-rare side and served it up with a bed of rice and bok choy. I threw the marinade used for the steak in a small sauce pan, cooked and reduced it down, and then drizzled it over the beef.

I’ve got to tell ya. It was dang good and quite the lunch to celebrate Mama. There’s no doubt that she would have loved it.

It’s hard to believe that it’s been 8 years since you’ve been with us but not a day goes by where we don’t think of you! We miss your feistiness, strength, stubbornness, laughter, and COOKING!!

Rinse the steak with cold water and pat dry with paper towels. Pour the marinade into a large resealable bag. Add the steak and rub the marinade all over. Squeeze out as much air as possible and then seal the bag. Place the bag in a shallow dish and refrigerate for at least 4-6 hours.

Remove the steak from the bag and pour the marinade into a small saucepan. Use paper towels to dry off the steak and allow the beef to sit out for about 10 minutes until it becomes room temperature.

Place a cast iron skillet on the middle rack of the oven and preheat to 450 degrees F.

After the cast iron skillet has heated in the oven for 15-20 minutes, carefully remove the skillet and place on a burner over medium-high heat. Add the butter, oil and allow it to melt together before carefully placing the ribeye steak in the skillet. Sear the steak on the first side for 1-2 minutes. Flip the steak and allow to sear for 30 seconds before placing the whole skillet into the oven. Allow the steak to roast in the oven for about another 2-3 minutes for medium rare (depending on the thickness of your steak). Remove the steak from the skillet and place on a plate or cutting board. Cover loosely with foil for about 5-7 minutes to allow the steak time to rest.

While the steak rests, simmer the marinade in the saucepan until it thickens and reduces by half.

To serve, slice the steak. Plate with steamed rice, sautéed bok choy and drizzle the reduced marinade over the top of the beef. Garnish with additional chopped scallions, sesame seeds and shilgochu. Enjoy!