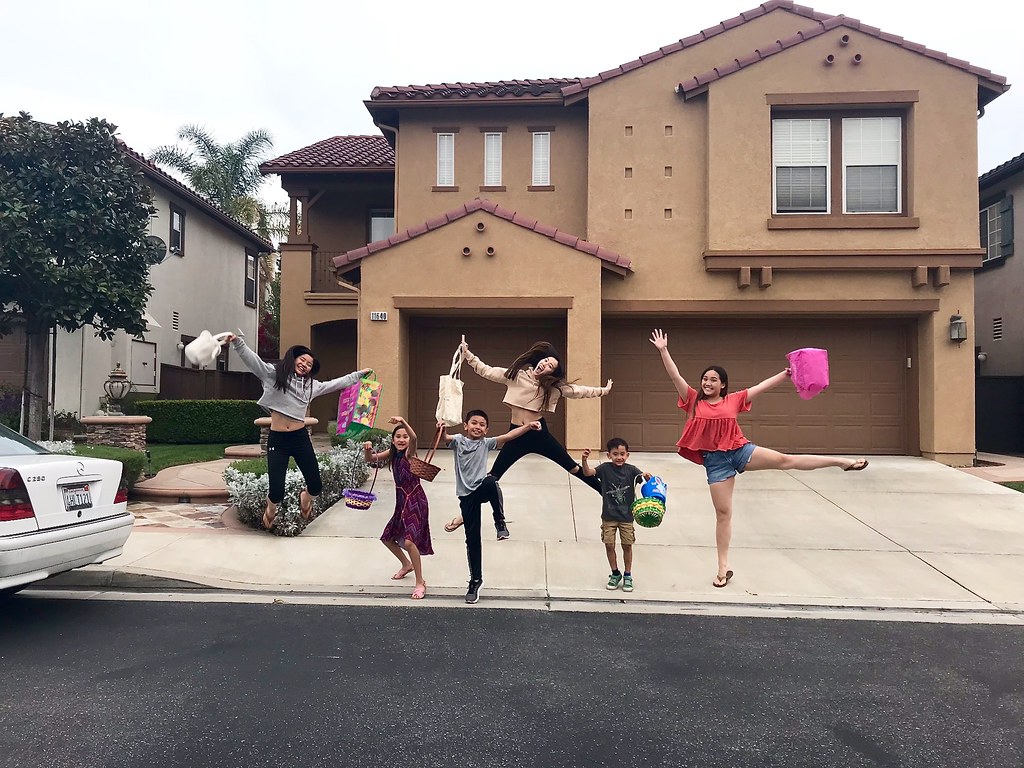 Why so egg-cellent? Because it happened the day before Easter — so of course, it was all about EGGS!!

The eggs had to come in a few different forms. Not only with our menu but also with some fun! (Oh Leo….never one to conform for mundane things like photos.) 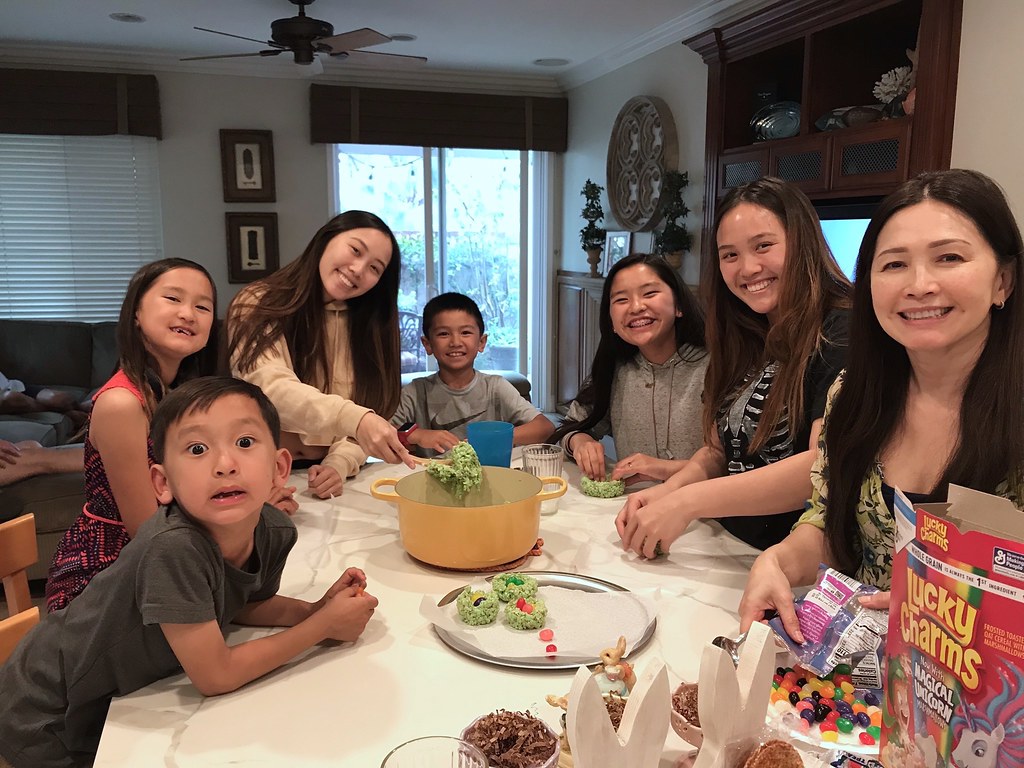 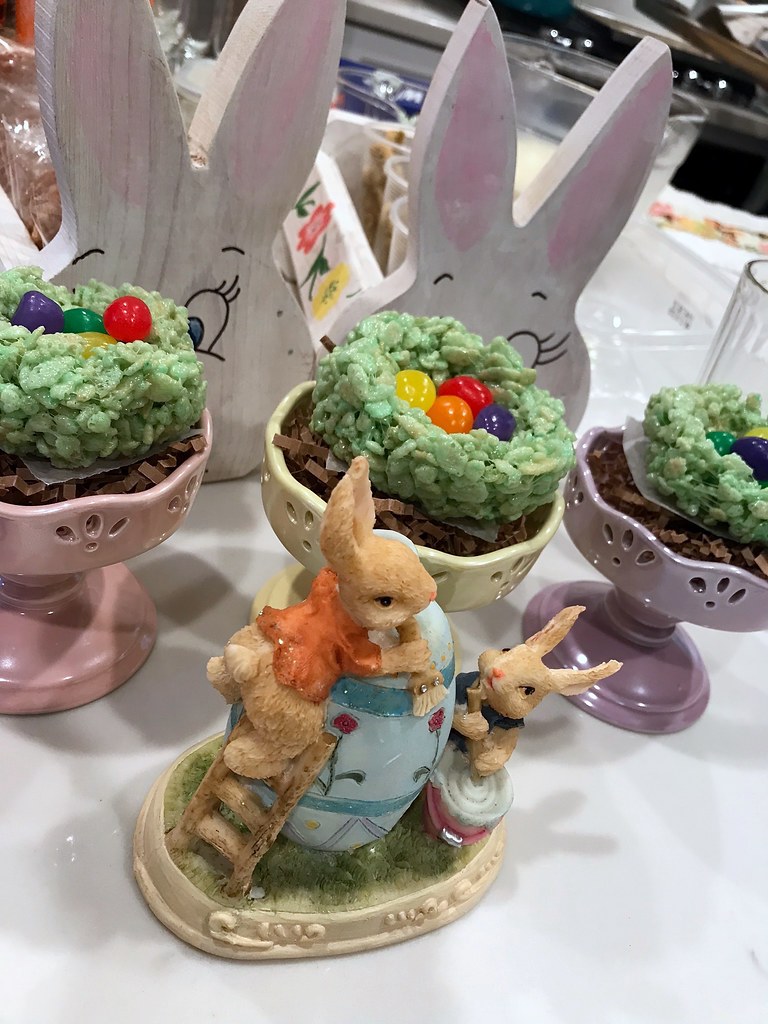 And not only were they yummy to munch on (minus the jelly beans for me…they’re not my fav) but it was a fun activity for the kiddos, too! 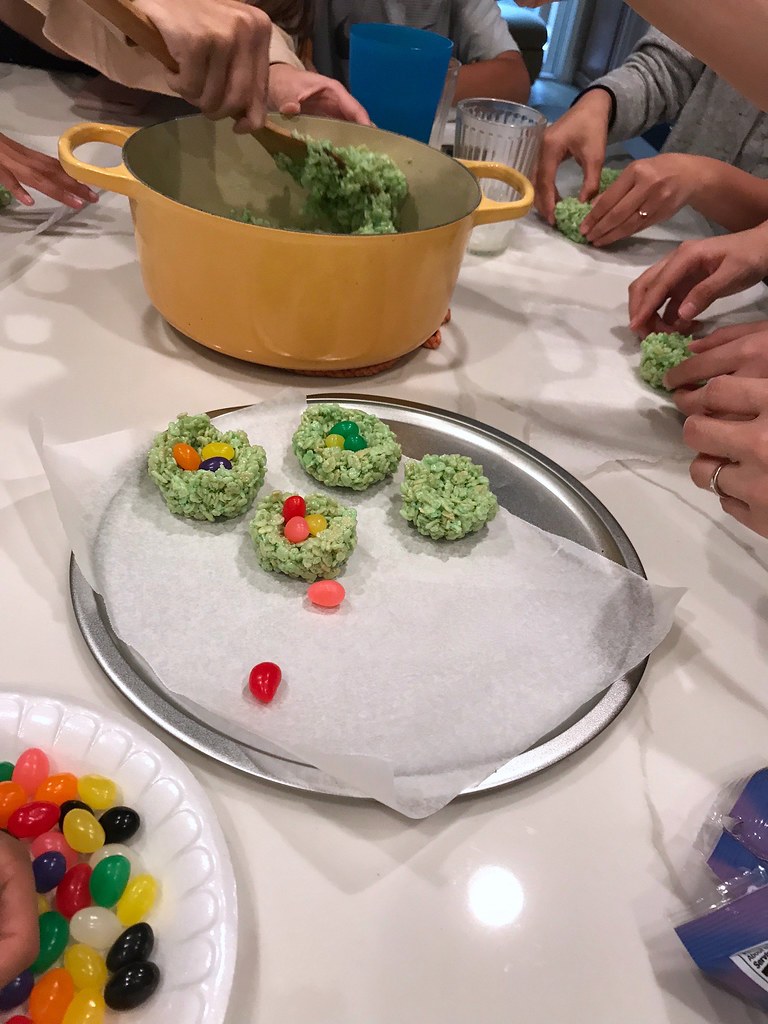 The older munchkins instructed and helped out their younger cuzzos.

Below you can see that Lucas’ face was full of concentration and determination.

Maya’s face was full of “hmmm…I wish we had jelly bellies instead”. 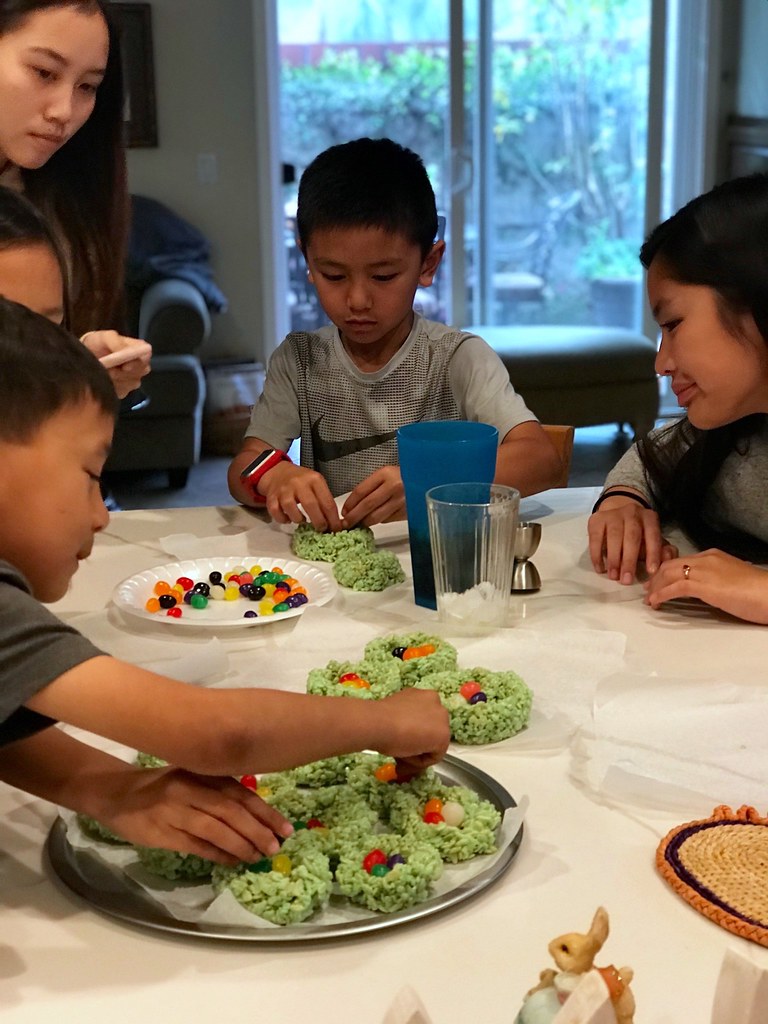 So festive and colorful! 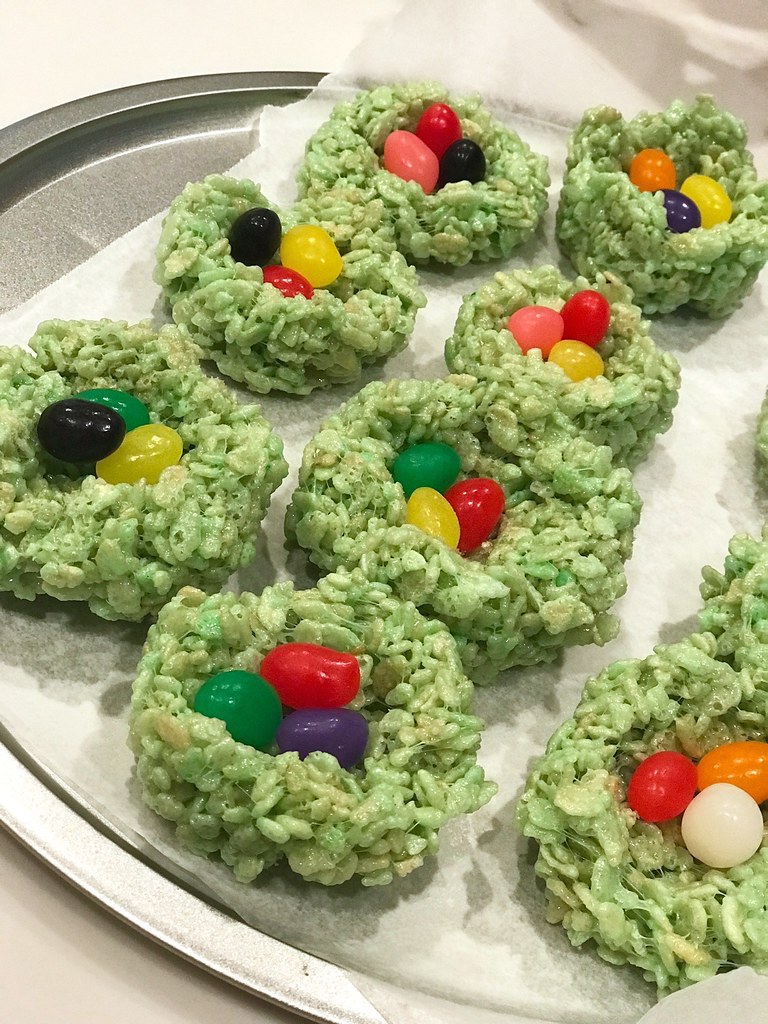 And apparently, they were Leonidas approved! 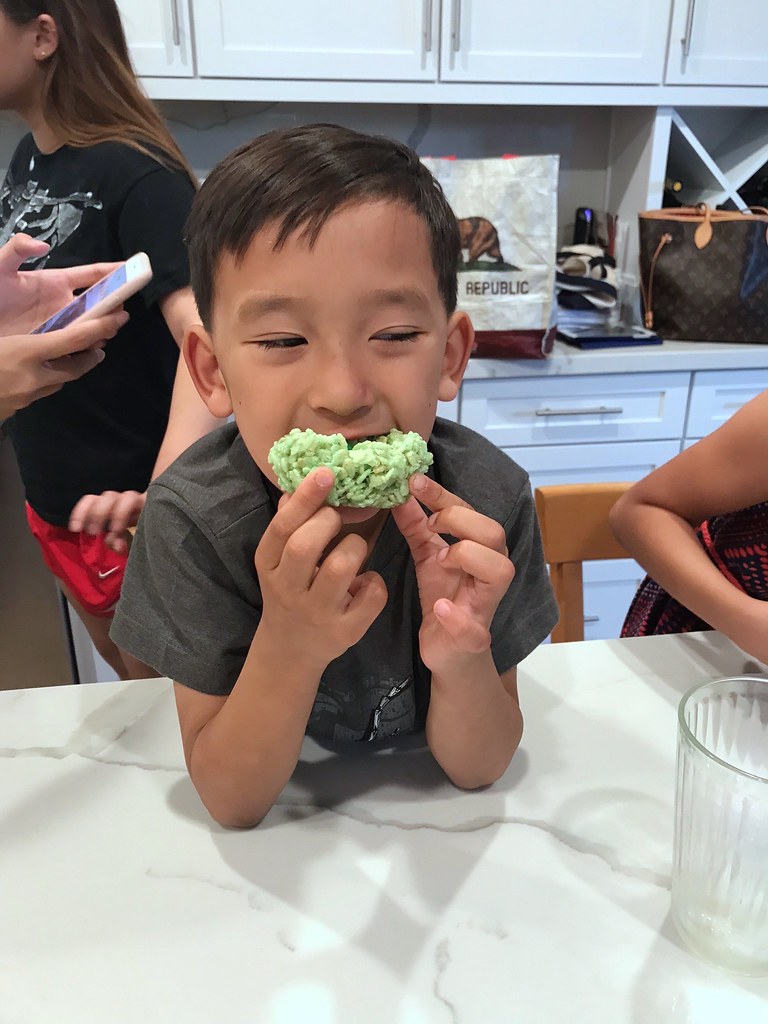 Since the kiddos had their treats, it was time for the adults to have one (or two), too! That’s right–it’s cocktail time!

As soon as we decided on the egg theme, I knew exactly what type of cocktail I would be shaking up that night. And you bet there were eggs in it-egg whites to be exact! Yes, my friends — we had Classic Bourbon Sours!

More times than not if you’ve been to an old school bar or better yet, a hipster one these days, you would have noticed a few cocktails with a decadent foam. Yes dear lovelies, that foam was most likely made by vigorously shaking a cocktail with egg whites in it! 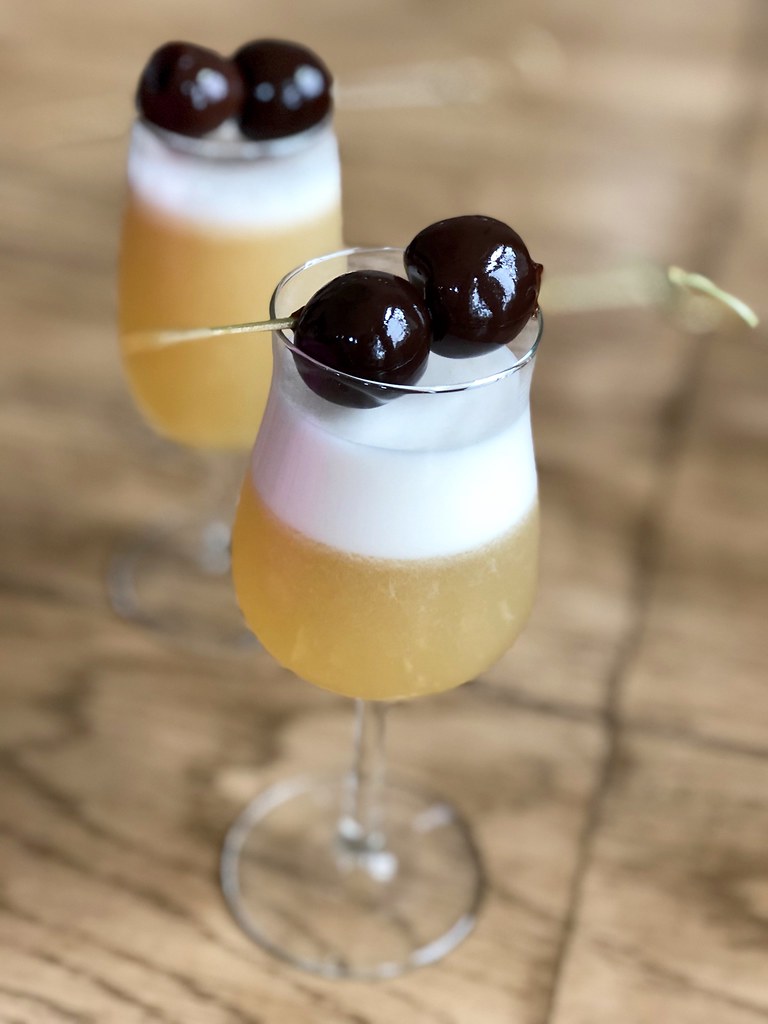 In a cocktail shaker with ice, I poured in bourbon (Bulleit Bourbon that day but use whichever you prefer), fresh lemon juice (it’s got to be fresh), simple syrup, a dash of bitters and an egg white (if you’re wary, be sure to used pasteurized eggs). Then shake what your Mama gave ya’ for a good 15-20 seconds and pour into a glass. I garnished mine with cherries that had been soaking in bourbon for the past several months and HOT DAMN did those cherries pack a punch!

The end cocktail was delightful. I could sip on them all day. But then I would need to sleep it off the entire next day. My aging, alas, has taken a toll on my cocktail-recovery time. 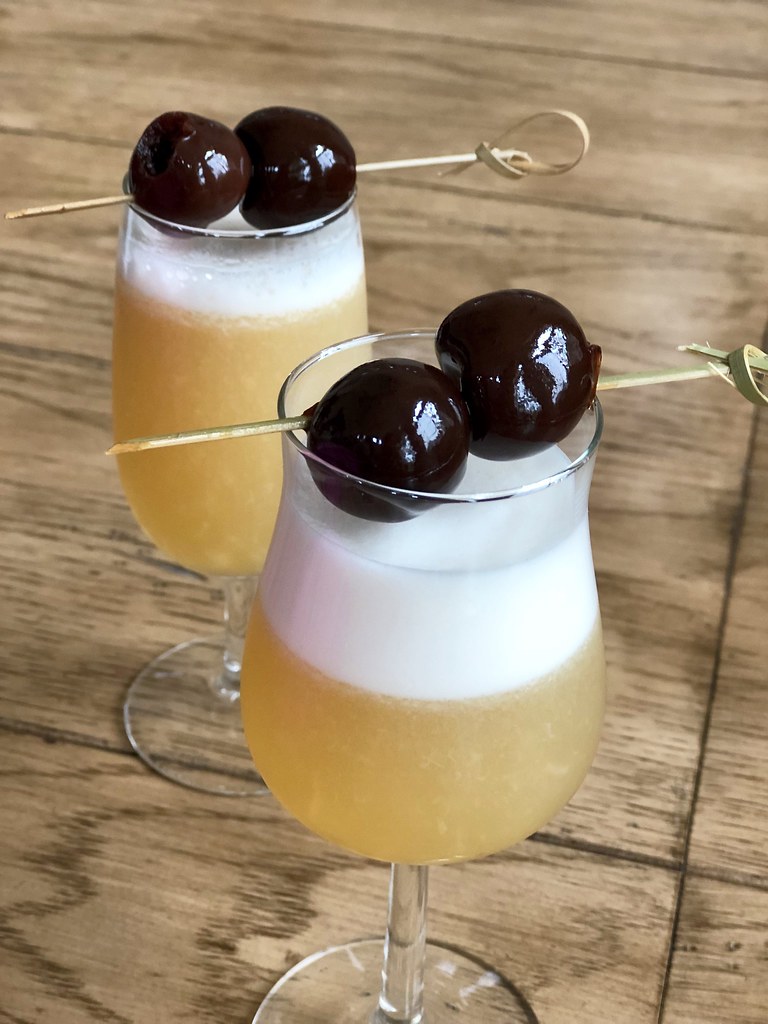 By then, I had gotten my sibbies all boozy so the only responsible thing to do was give them something to nosh on.

I was up to bat for appetizers that night and after mulling over several different ideas with seester T, I settled on making chawanmushi – a light, Japanese egg custard. If you’ve ever had it at a restaurant before, you know how wonderfully smooth and creamy it can be. And guess what? It’s actually easy to make–when you sous vide it of course! 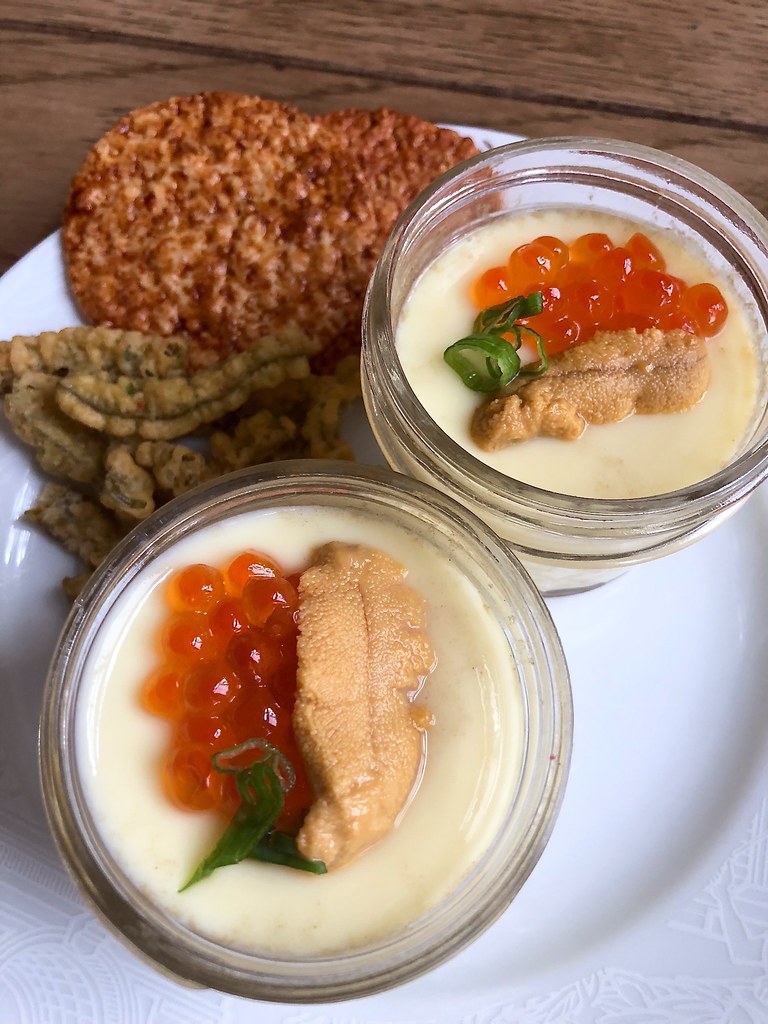 Don’t be too surprise that I opted to sous vide –it has been, after all, a fam din or two since I last busted out my beloved Anova. It needed some love and the method not only provided a no-fuss process but its gentle cooking method resulted in the chawanmushi‘s luxurious texture.

I recruited both Nina and Nini to help out with it. Nini helped with the “custard” by whisking together eggs, seafood stock, dashi powder and bonito powder. After sealing the mixture in the little mason jars, we sous vide it at 176 degrees F for an hour. Then Nina gently topped each with a sprinkle of Maldon salt flakes, fresh uni, a generous spoonful of ikura and some fresh scallions.

I served the Sous Vide Chawanmushi with Uni and Ikura with two different types of Japanese rice crackers (one with wasabi, one without) for some added crunch and texture. They turned out rather beautifully…didn’t they? And I’m happy to report, they were OISHI! 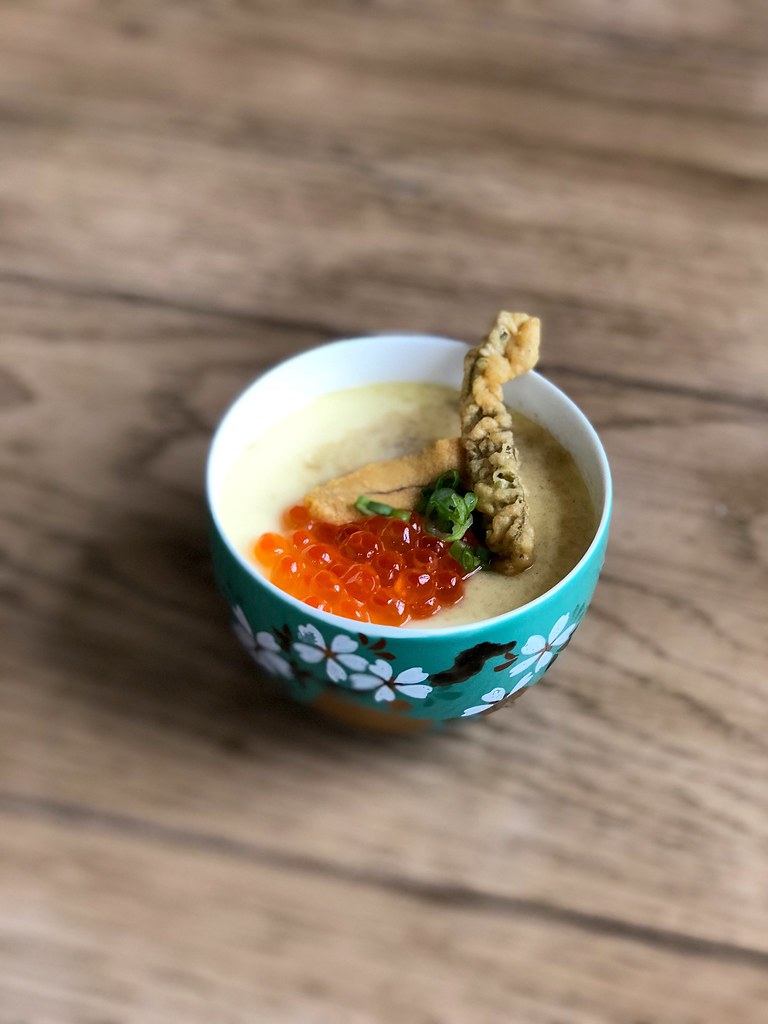 With a little something in their tummies, the munchkins were ready for their other activity….

That Fam Din, our human-lings ranged from ages 6 through 19 so the over 200+ eggs were filled with not only candy but some lottery tix and money, too! 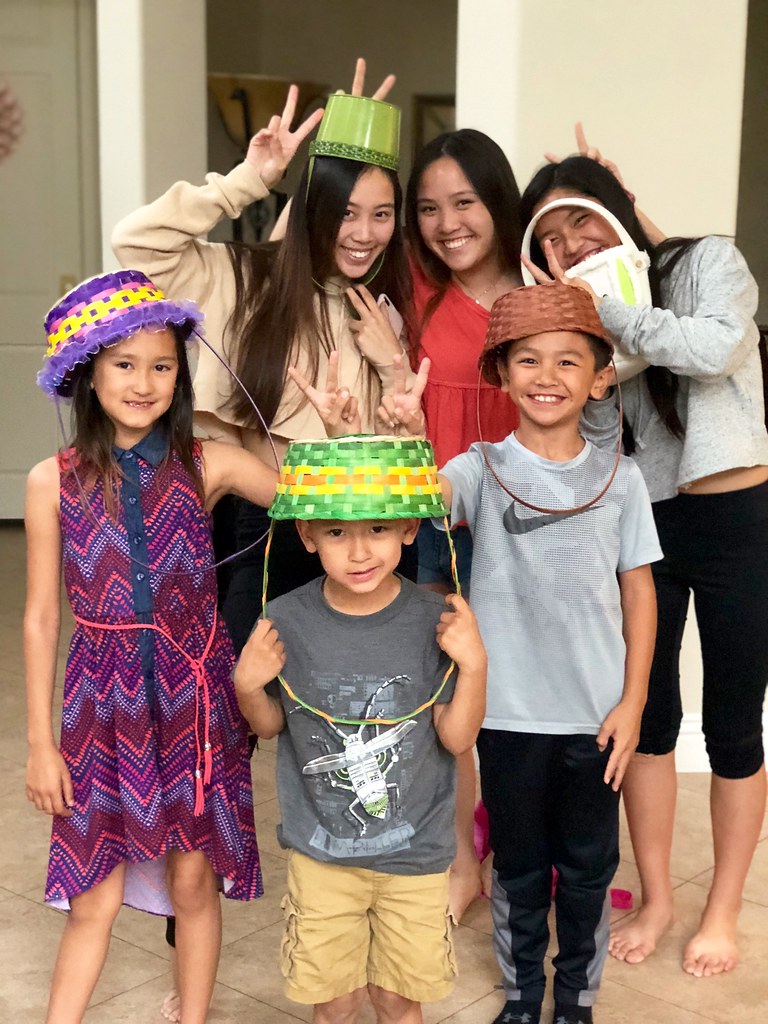 Both B.I.L.s hid the eggs in the front and back of the house. And I’d be remiss not to mention that Leo requested that we hid at least 10 “obviously” so that he’d be sure to find them.

That kid cracks me up. 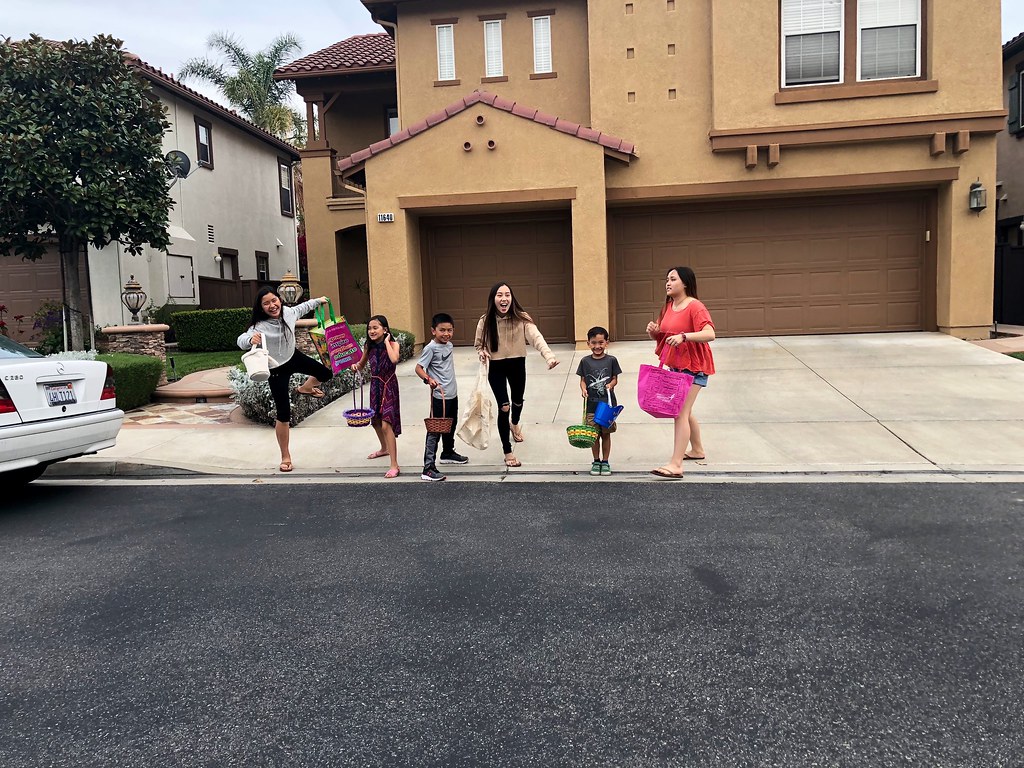 We made the munchkins line up across the street before letting them loose–and WOWSERS! It was a mad dash!

Laughing, shrieking, rolling in the grass…….

But enough of what I did, let’s get back to the kiddos! 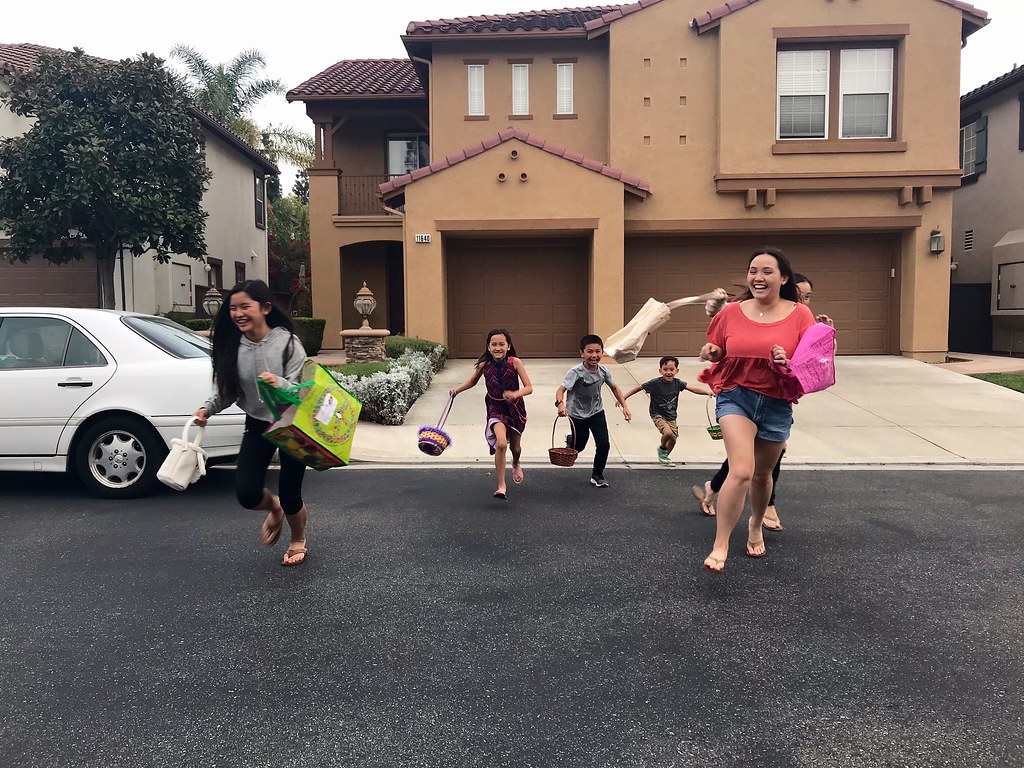 They were scavenging fiends!

With all of those eggs scattered about, I was sure that it would have taken them longer to find them all. But nope!

Within a blink of the eye, they were done! 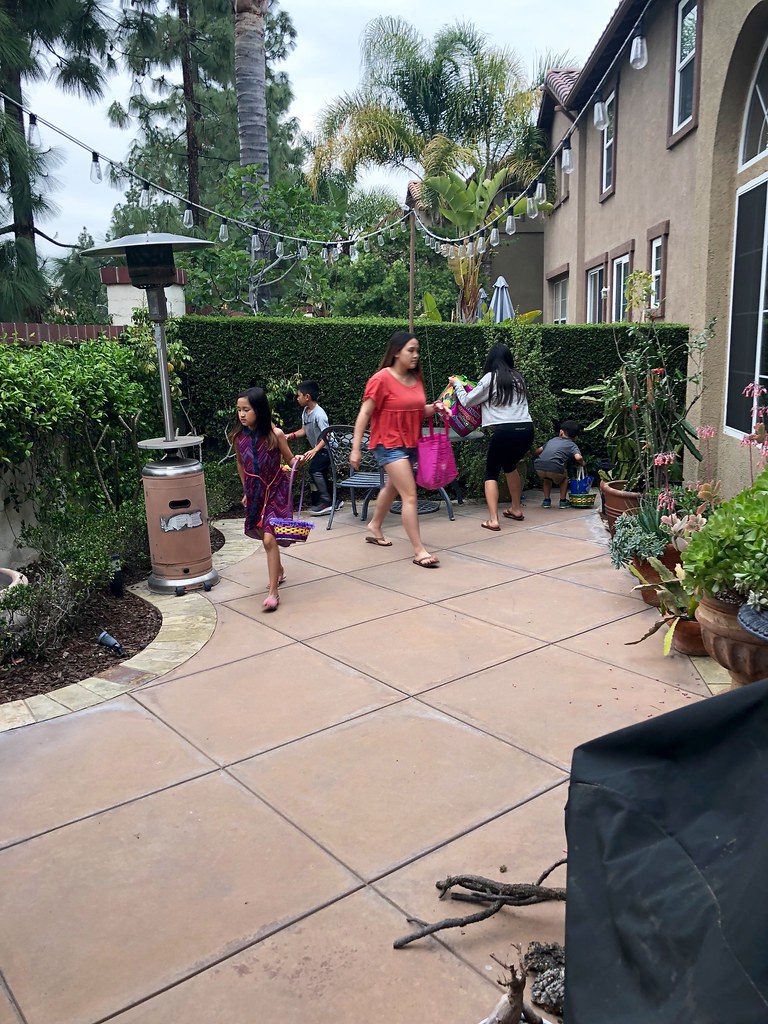 Wait a second….why do the older ones have big bags whereas the littles have small baskets? 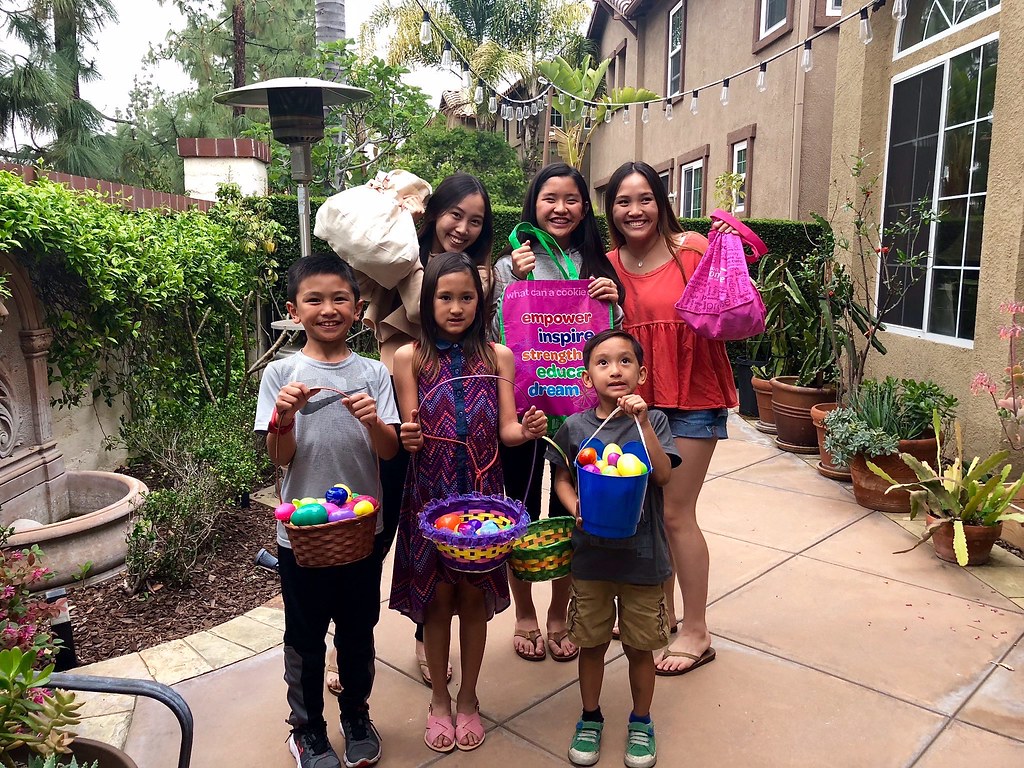 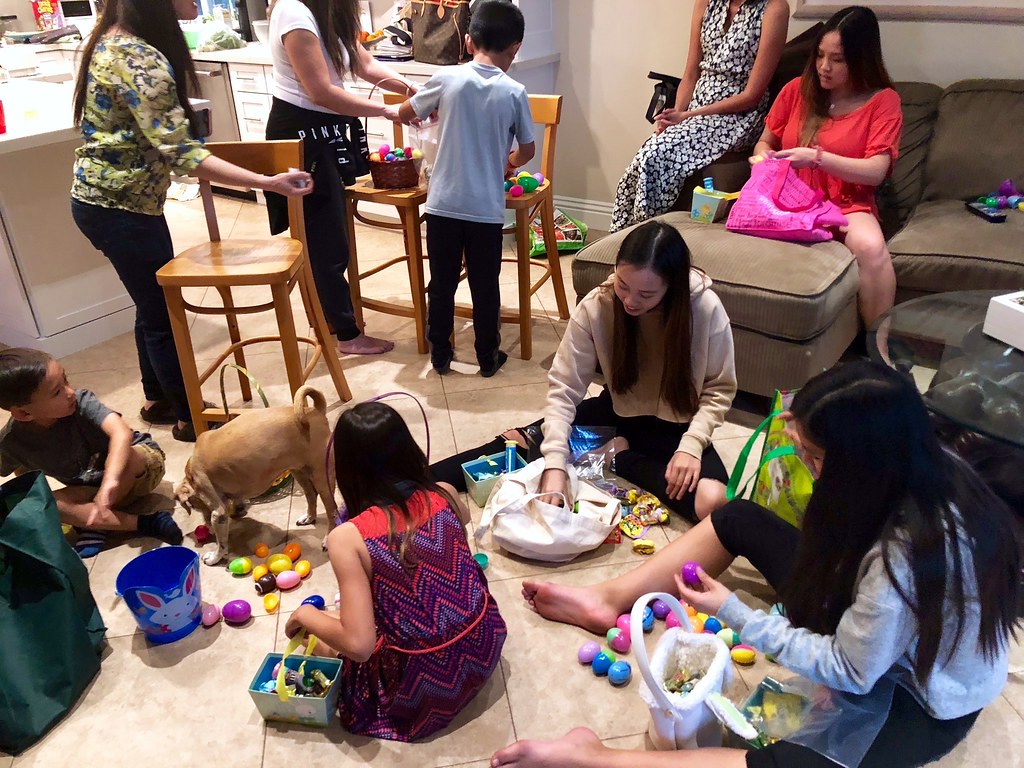 Somehow we were able to refocus and get back to meal prep.

V enlisted Nini to help out with their dish that we nominated he and L for. 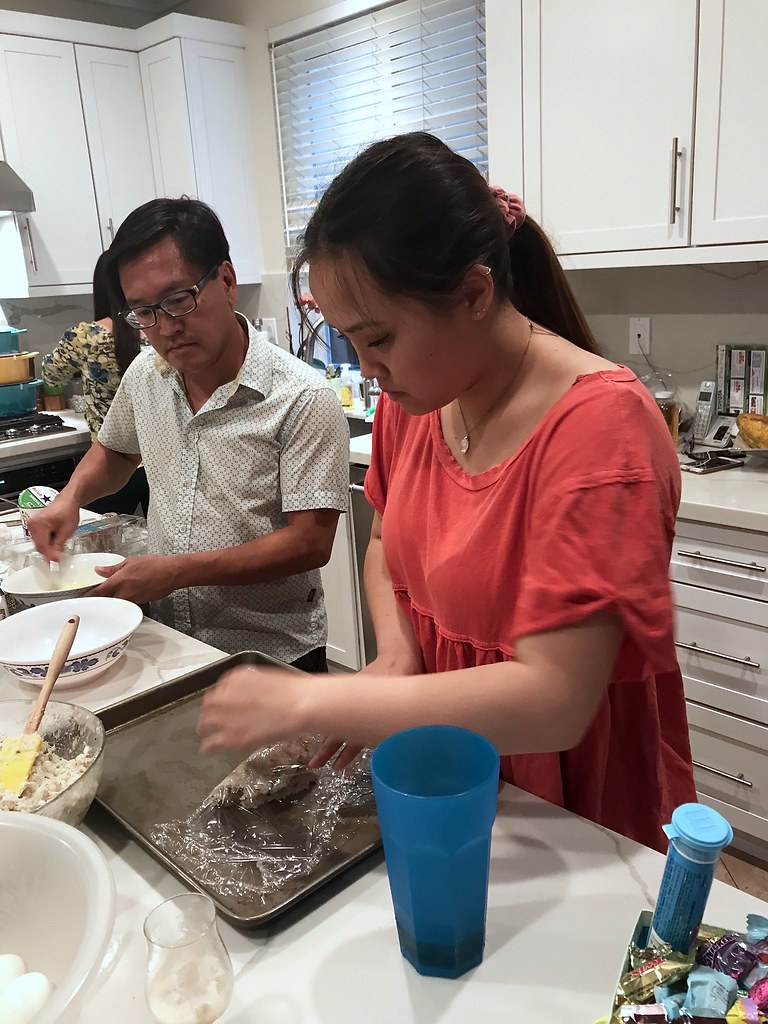 Can you guessed what they fixed up below?

Did you say Scotch Eggs?

But not just any Scotch Eggs! 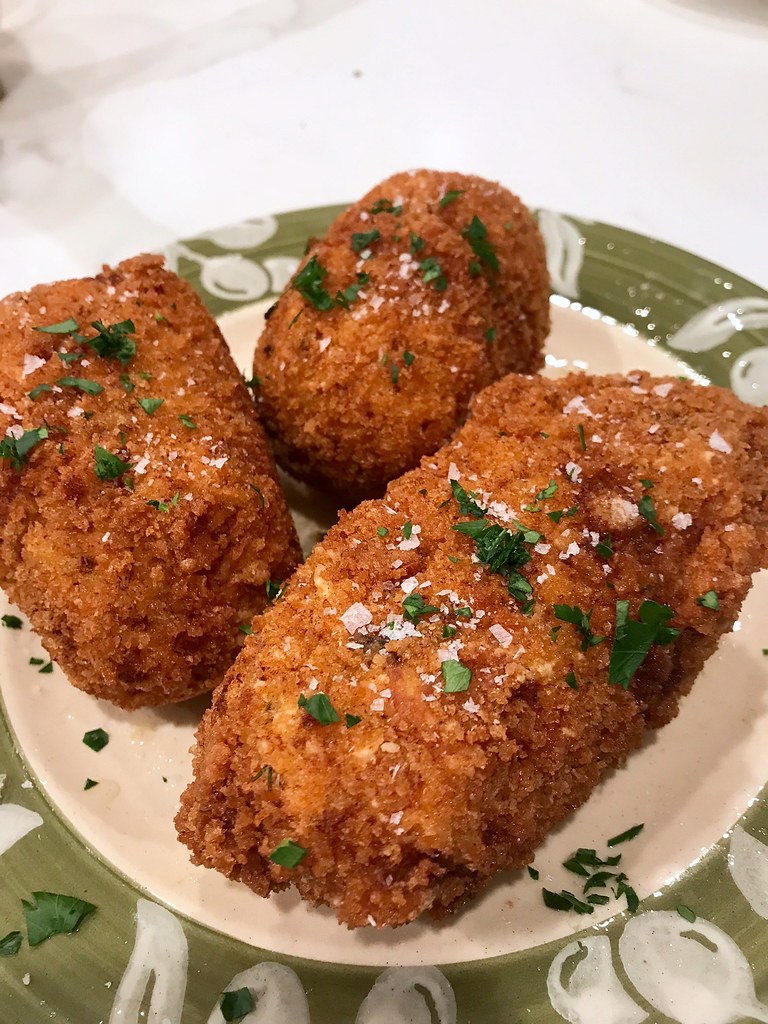 Traditionally, they are hard boiled eggs with a pork sausage wrapped around it. They’re then breaded and fried. What’s not to love about that?

V and L also took boiled eggs but instead of pork, they wrapped them in a seafood mixture that was made of shrimp, dungeness crab and diver scallops. Fancy, eh?

They then rolled them in panko and deep fried them into these golden torpedoes of decadent deliciousness! 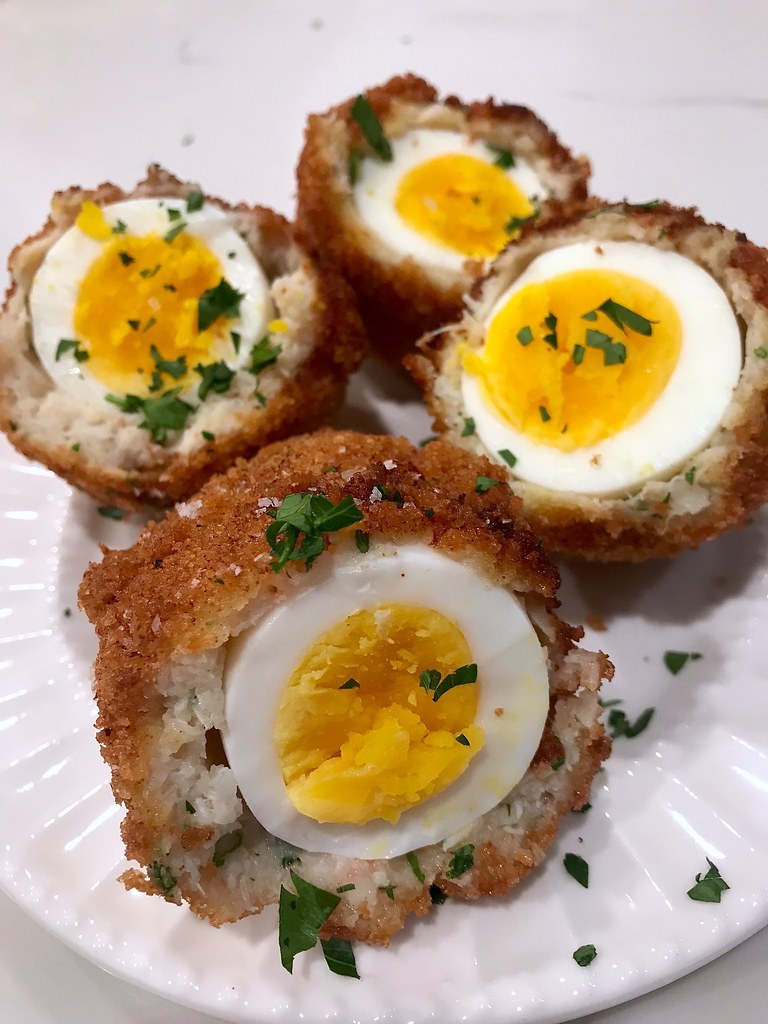 I have to admit that T and I helped out with boiling the eggs while they worked on fixing up the seafood mixture. We were aiming for a soft-boiled egg so that when it was deep fried and sliced into, the yolks would still be unctuous and jammy.

Though we blew it and overcooked them.

But good grief, they still were awesome! 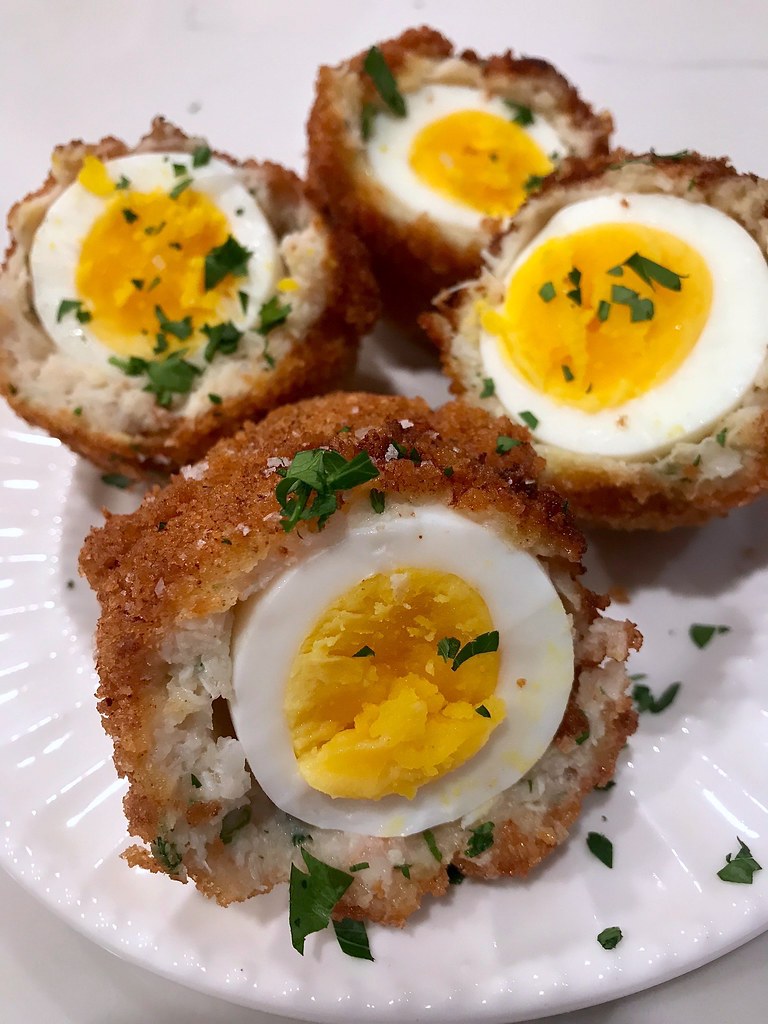 T also made a Bacon-Onion Quiche and a Mushroom Quiche. Yup, TWO! We love options and we especially love leftovers!

Her homemade pastry dough was giving her a bit of trouble that day but gosh darn it, it was tasty! 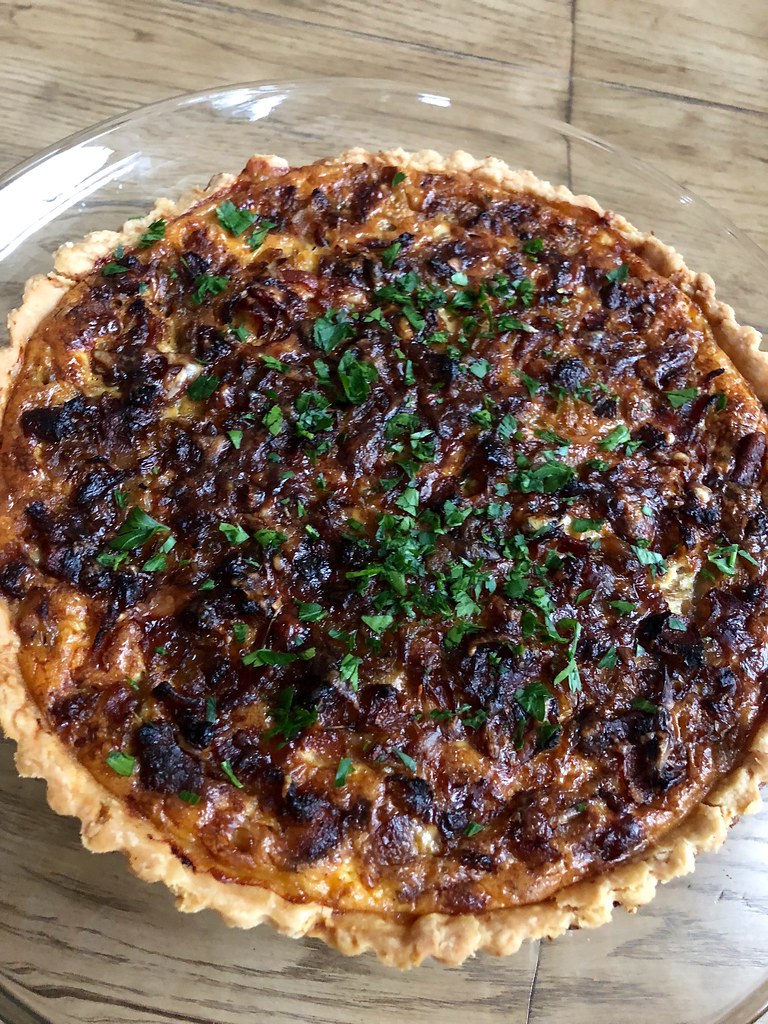 Then, we were near EGG DRUNK.

Don’t get me wrong, everything was delectable. But it was A LOT of eggs. We were sorely missing on a salad or other vegetable. I guess we could have made an egg salad–but I’m not sure that would have brought the type of levity that was much needed at that point.

We definitely needed a breather before dessert.

While the humans cleaned up, Leia took a nap. Well, right here she’s giving us stink-eye for making too much noise during her nap…but she napped nonetheless. 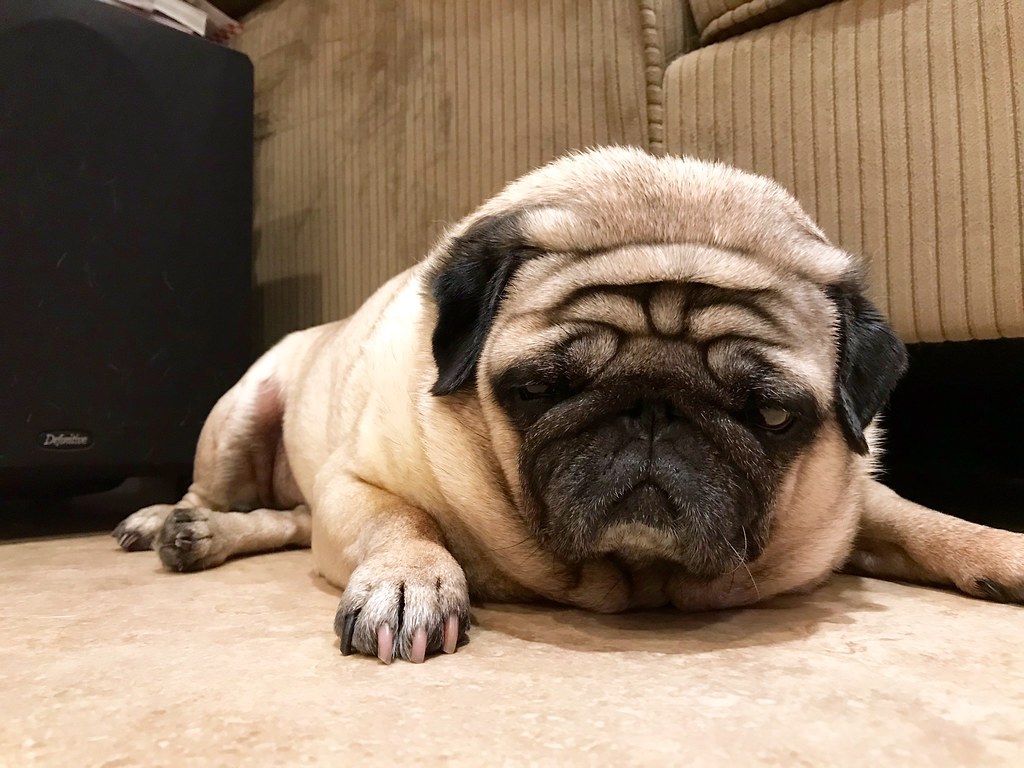 And these two cuties cuddled. 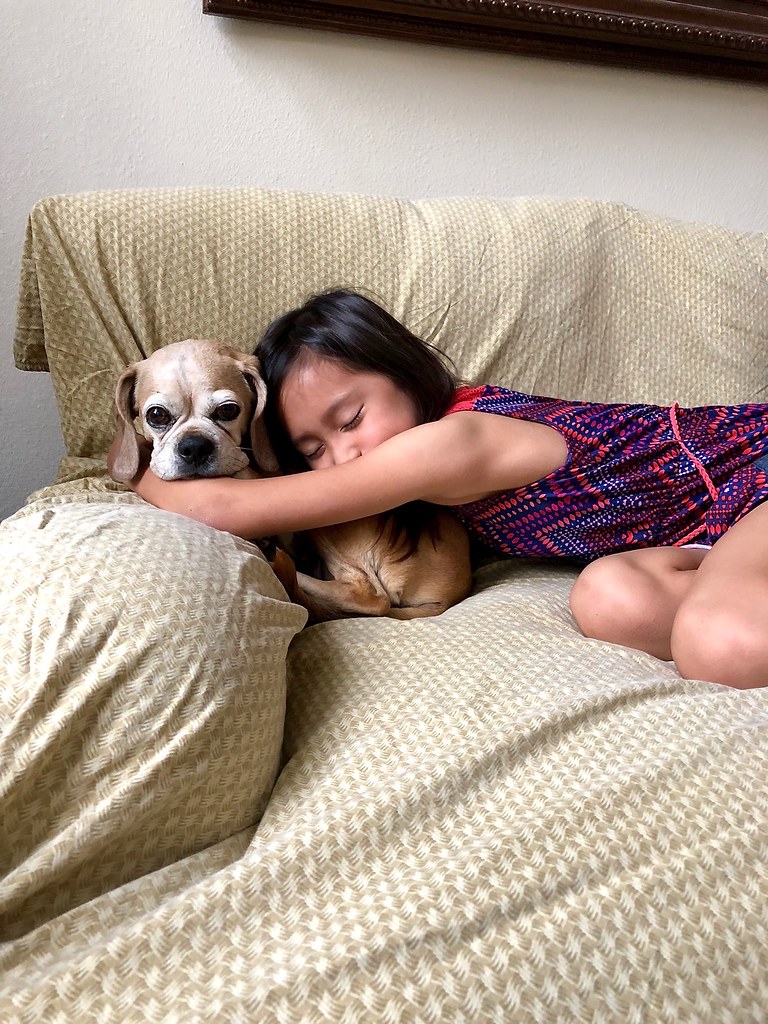 At this point, most people would say “Hey, my belly is way overfilled. I’m going to pass on dessert.”

We suck it up (or I guess “in”) and get down to dessert business.

To close out our egg-a-palooza, seestrah N made these cute Mini Lemon Meringue Pies. 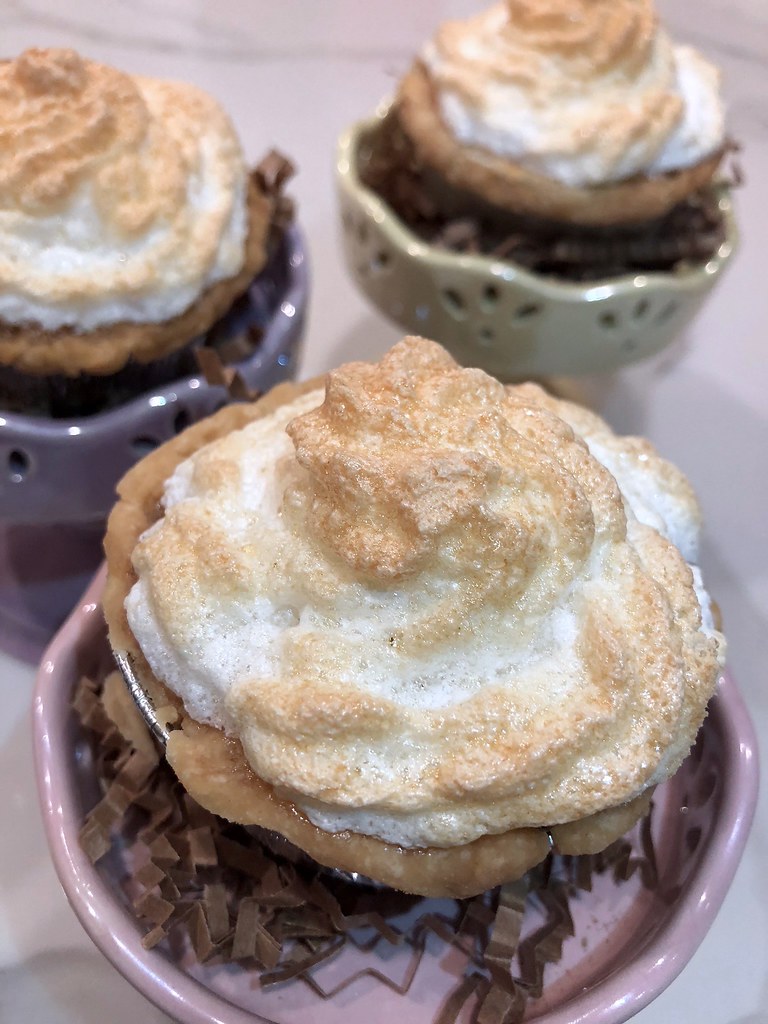 I’ve got to admit, I didn’t think I liked lemon meringue pies because the ones I’ve had before were really artificial tasting. The filling would be really thick and sticky in texture and the meringue would be overly sweet.

These little angels were the perfect close out to such a rich meal. The lemon filling was light and citrusy. The meringue was airy and not too sweet. The crust was flaky and buttery.  My mouth is watering just thinking about them!

And it was perfect that they were little mini pies because honestly, I couldn’t fit much more in me. 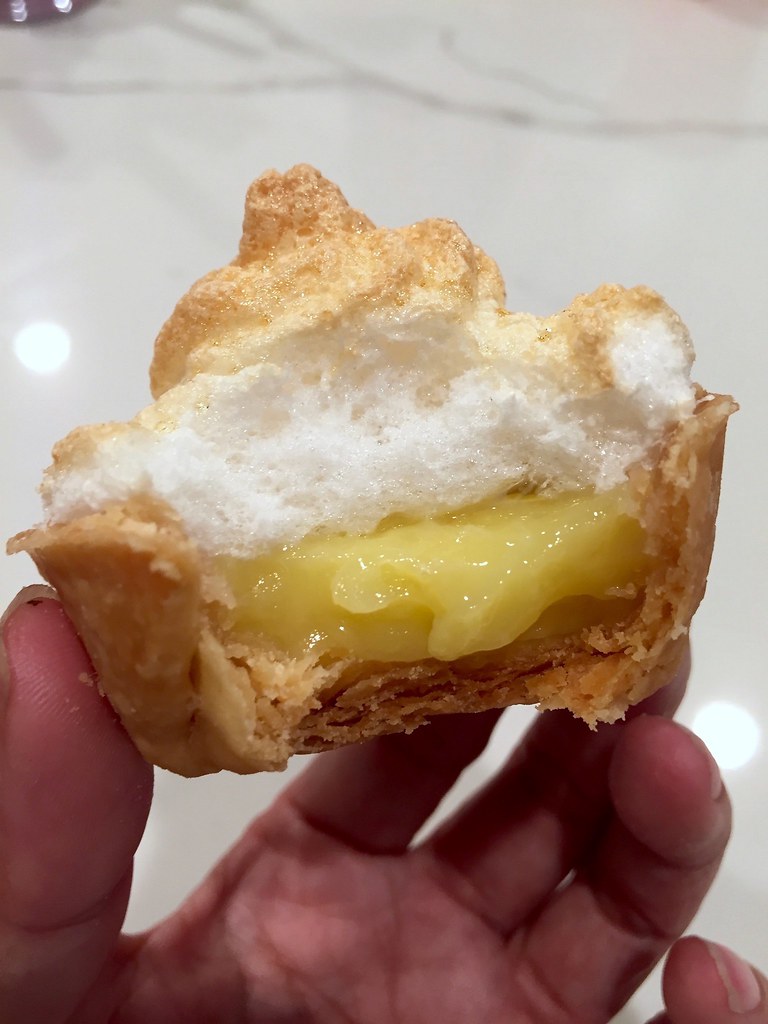 That’s a wrap on our EGG-stravaganza of a Family Dinner!

And as a wise Abraham Lincoln of Bill and Ted’s once said, “Be excellent to each other….and….PARTY ON, DUDES!” 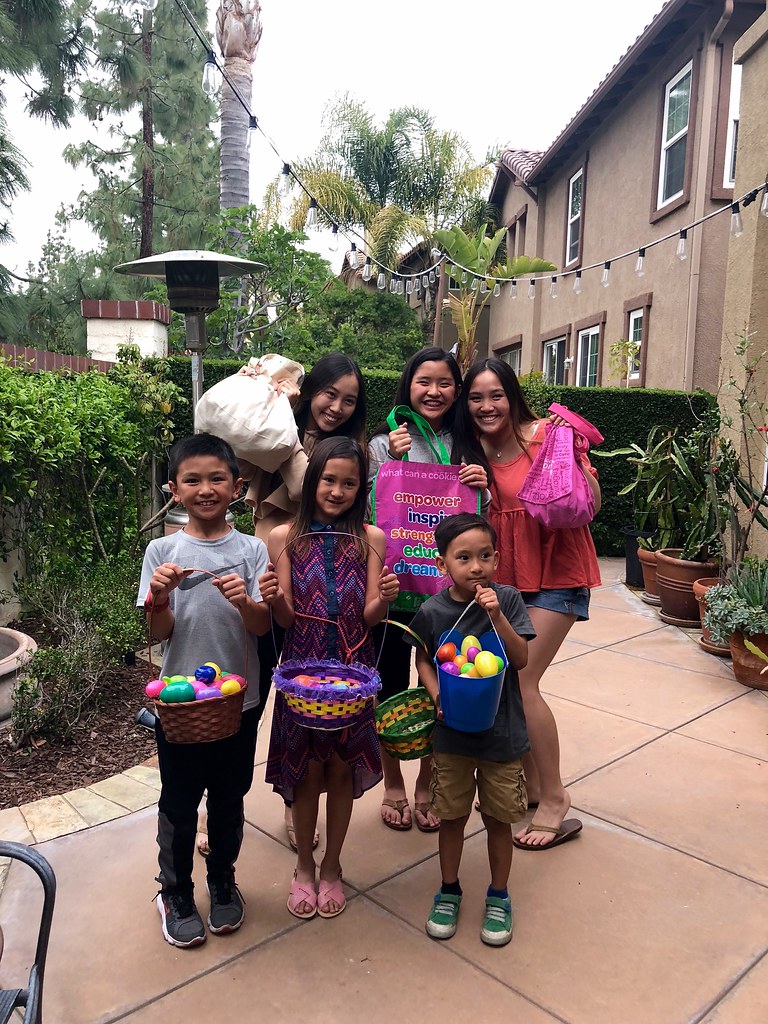 3 thoughts on “A Most EGG-cellent Fam Din!”