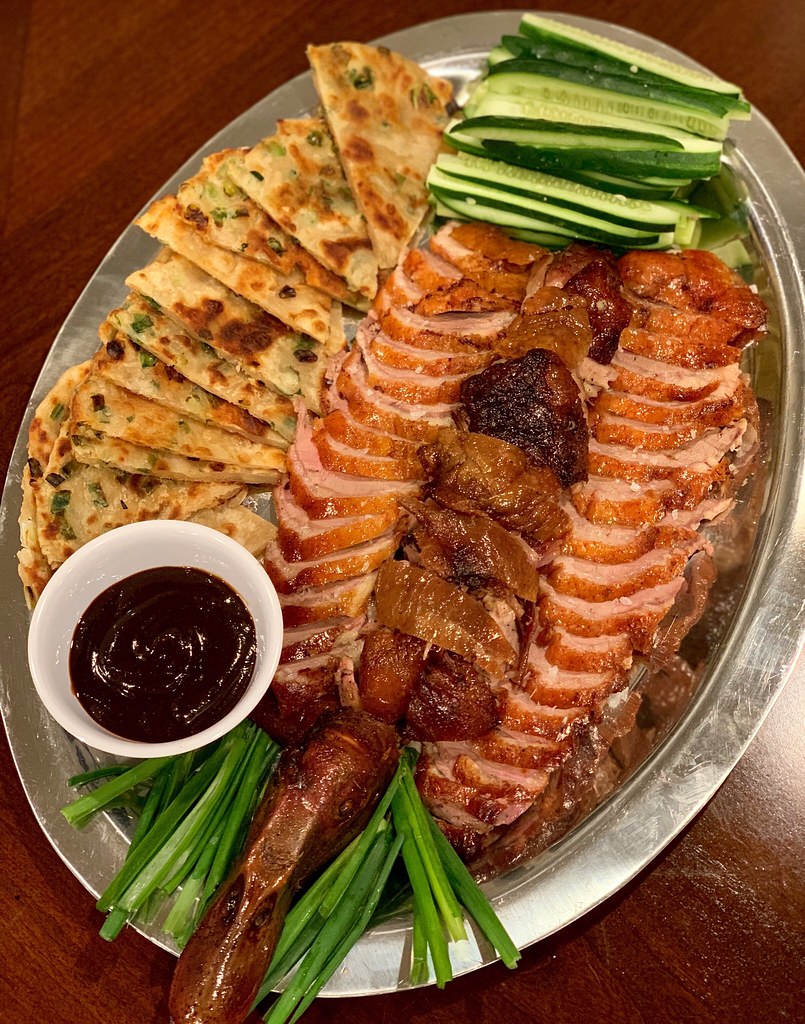 Before I get started, let me caution those that get wary about seeing protein in its “whole” state because this recap will show the entire duck (sans feathers) during the cooking process. If that freaks you out, maybe skip this one and just wait until my next post. 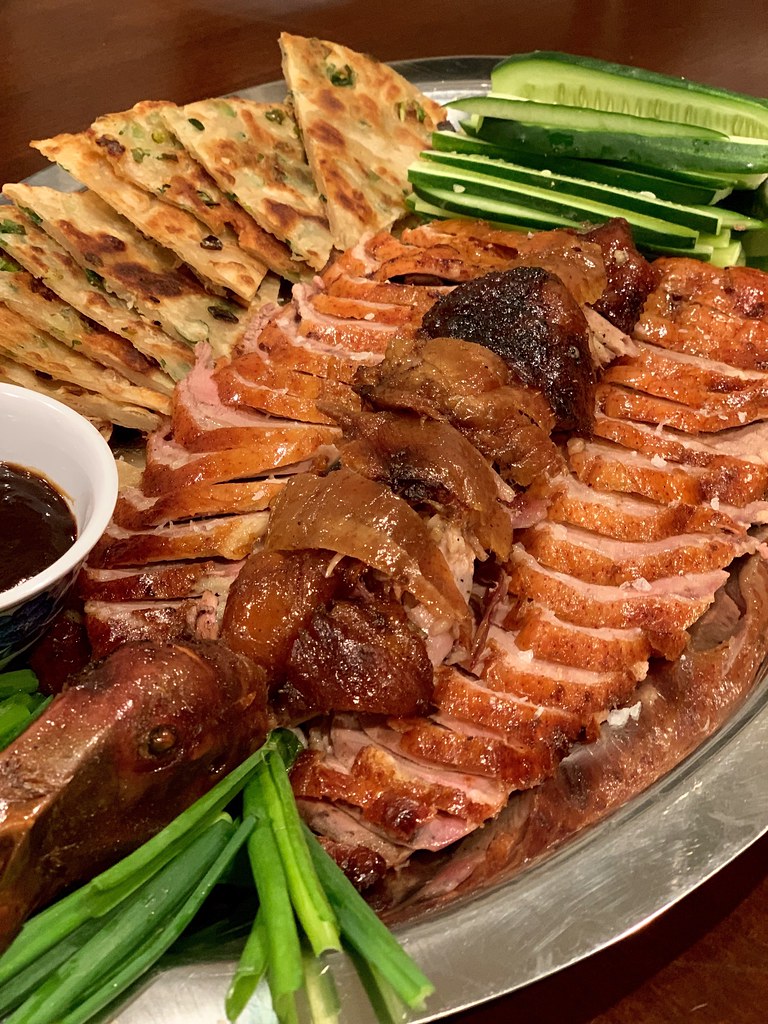 One of my favorite things about spending a big chunk of time with the family over the holidays is that we notoriously tackle the more challenging Foodventures that we’ve previously deemed extremely laborious or too daunting to try. I’m talking about things like start-to-finish-Tamales, Xiao Long Bao and the time V created an homage to one of their favorite dishes from Flushings Chinatown – Steamed Glutinous Rice with Crab in Lotus Leaves.

This past holiday break was no exception as Brother and I took a spin at making Peking Duck for the first time using his Traegar smoker. Yes, the decision was made after consuming a few bottles of wine….but aren’t those the best times to make choices? 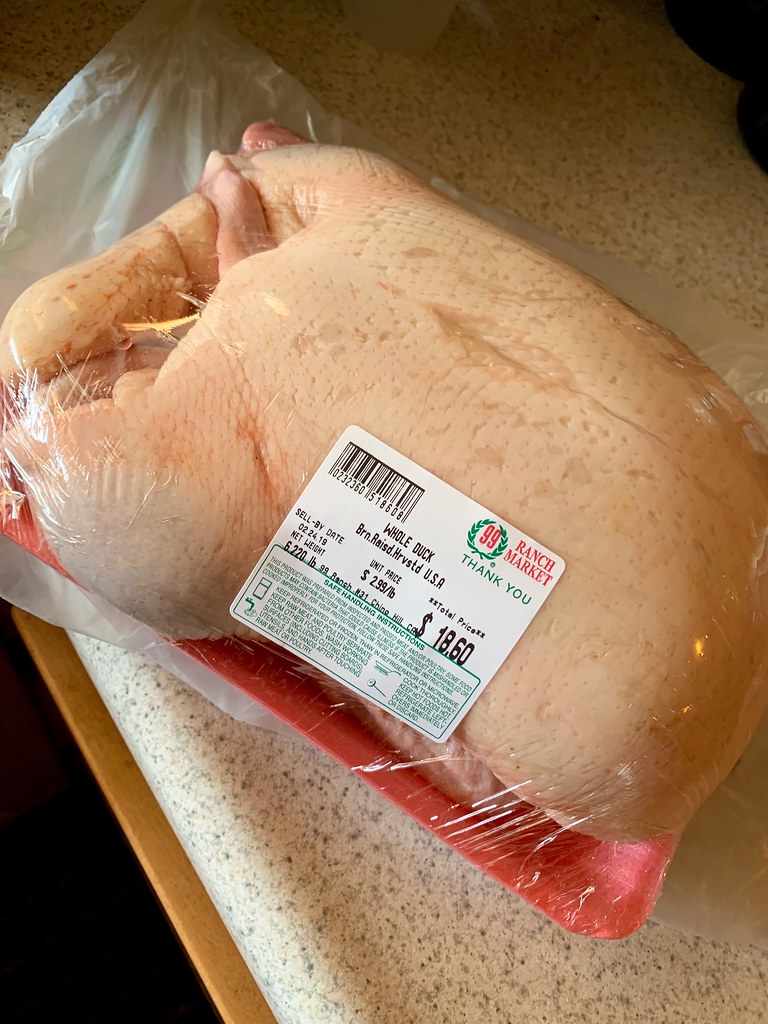 Luckily, V & L had discovered a FANTASTIC tutorial by BBQ Champion, Harry Soo, on YouTube that we followed to the “t”.

Fun fact: Harry, who is behind Slap Yo Daddy BBQ, lives in Diamond Bar where 4 out of 5 of us sibbies graduated high school – Go Brahmas!

The day of our Peking Duck undertaking, we popped into 99 Ranch Market to pick up some of the essentials that started with a 6 pound whole duck. I removed its wing tips and feet with a large cleaver and then slowly used my fingers to lift and separate the skin from the meat. 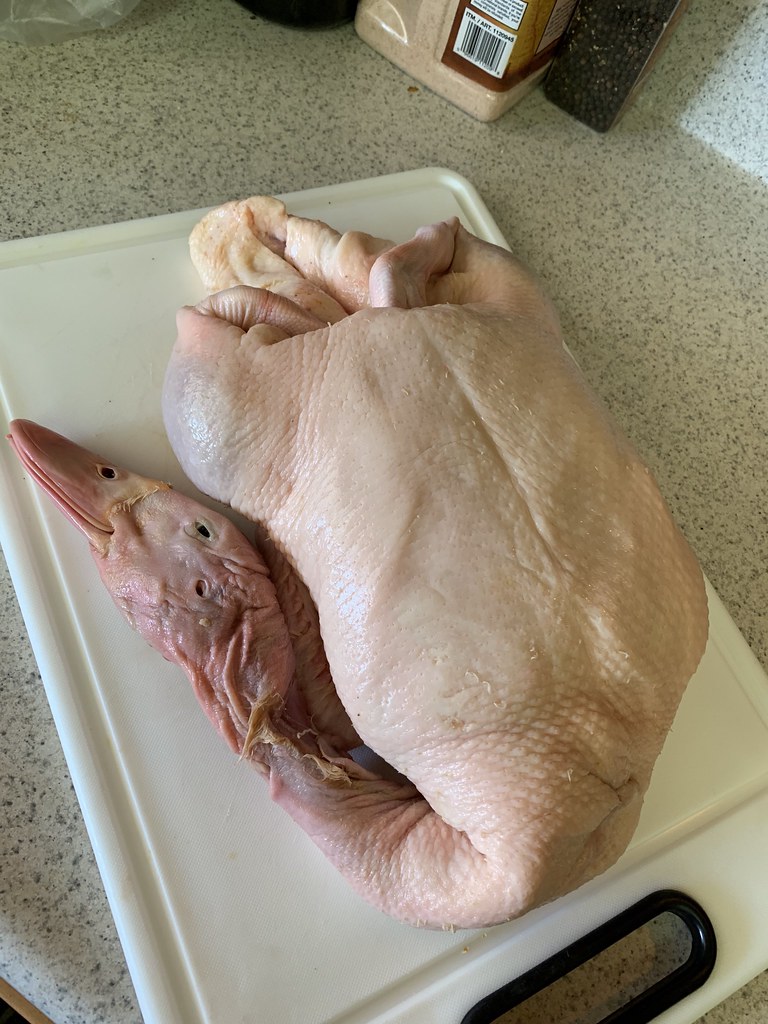 With Peking Duck, it’s all about spending LOTS of TLC on the skin to create a crisp and glossy finish. Even after using your fingers to loosen the skin, the pros will then use an air compressor to detach the skin so that when the duck cooks, the fat will slowly melt away.

And if the pros tell us to do so, we’re gonna try it! Particularly since V happens to have an air compressor! So he switched out the tubing and rigged a straw to be used as the nozzle — and we were then off to the races!

Easily the CRAZIEST thing I’ve ever done in the “kitchen”.  Brother and I were cracking up the entire time but it totally worked!

It’s how we bond. 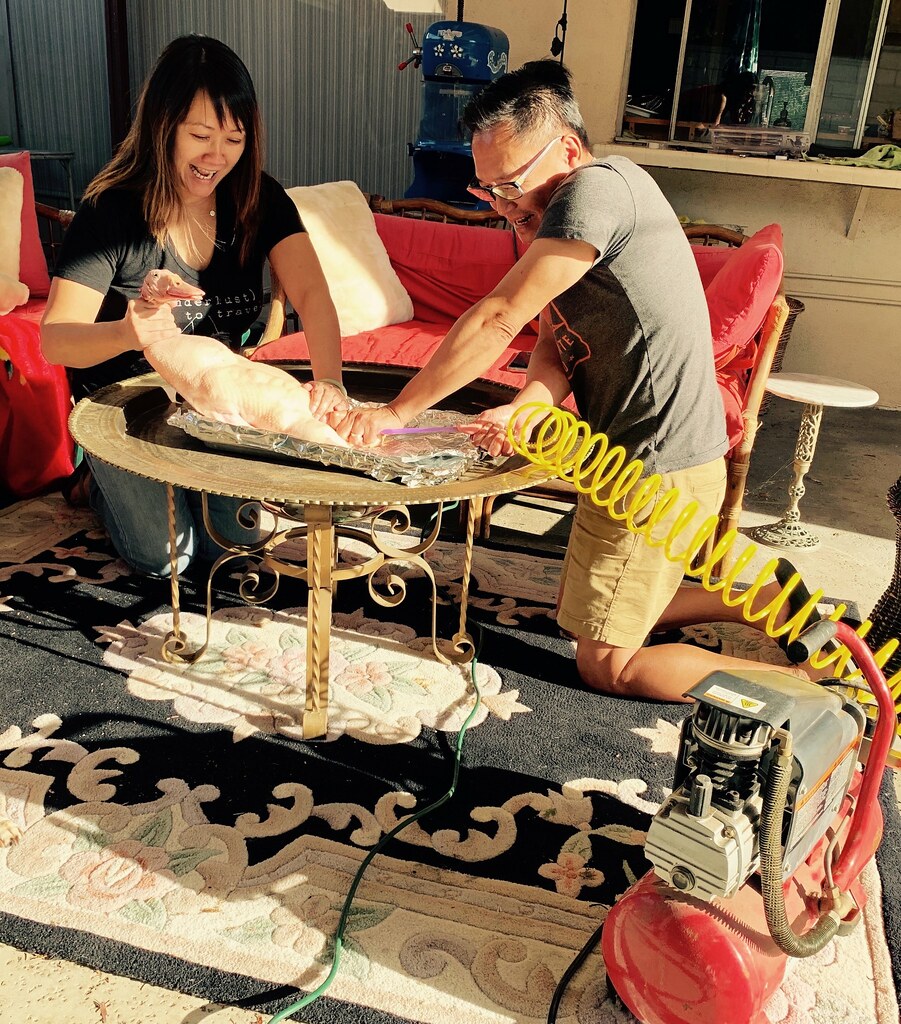 While V finished blowing Howard up (yes, I named him — and yes, it’s after the 80s alien duck movie), I charred the scallions and ginger as well as toasted whole star anise and coriander. 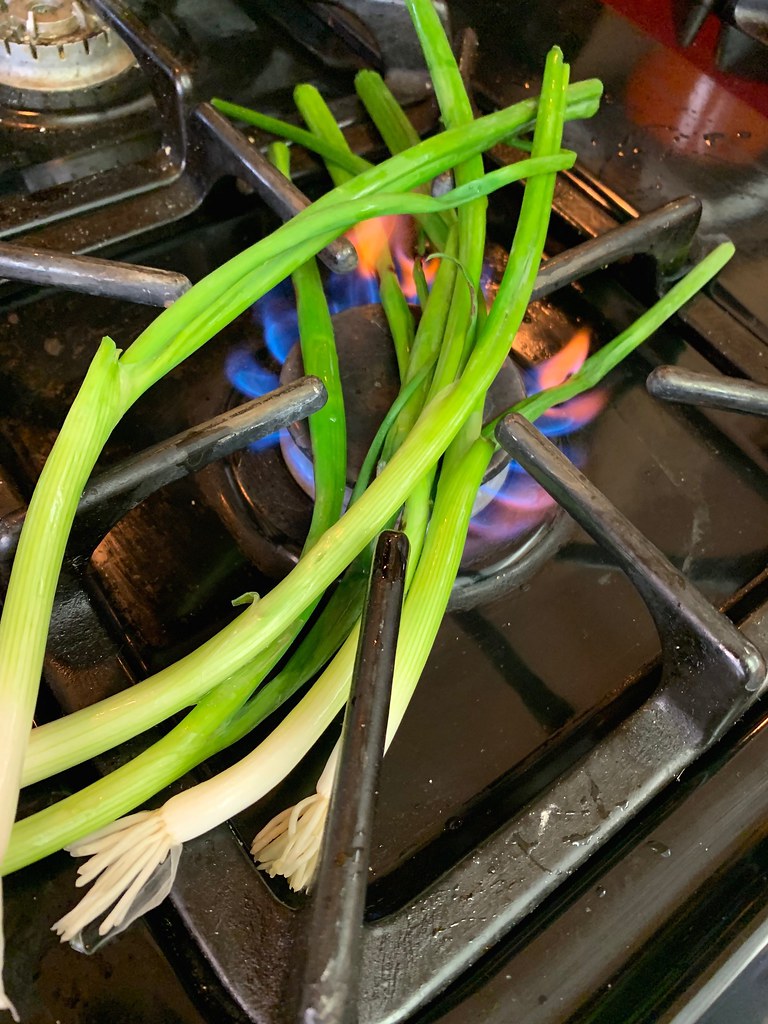 I also mixed up the marinade for the cavity which included five spice powder, brown sugar, hoisin and a grilling spice mix. 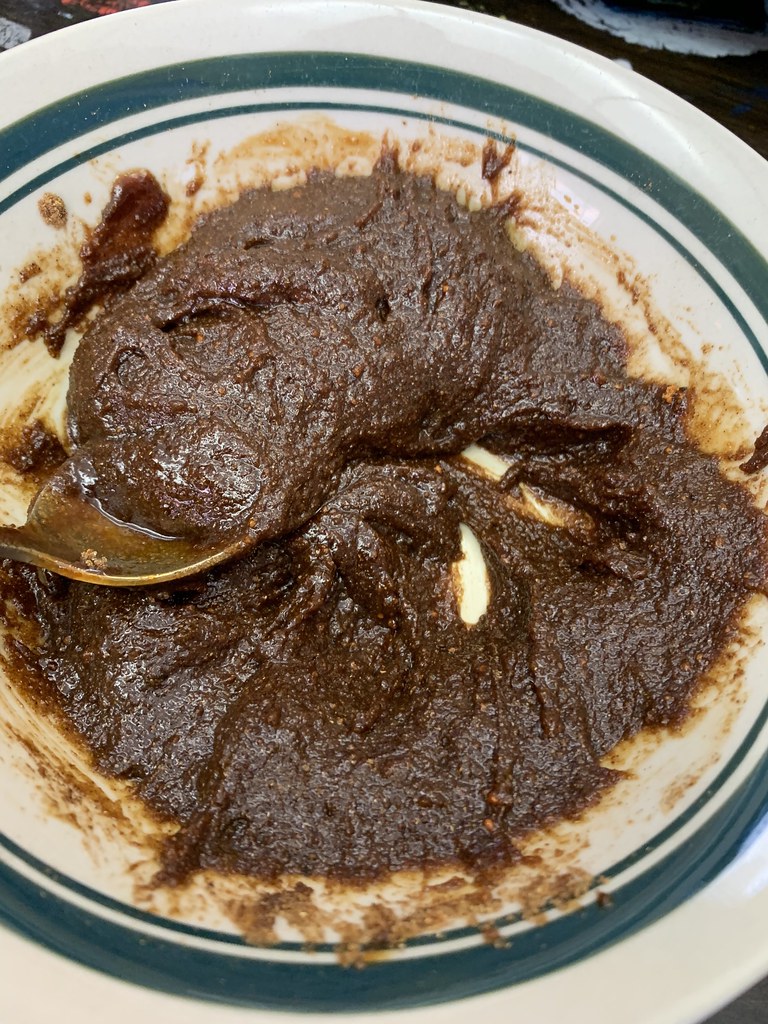 After we stuffed Howard with everything listed above, V stitched him up. 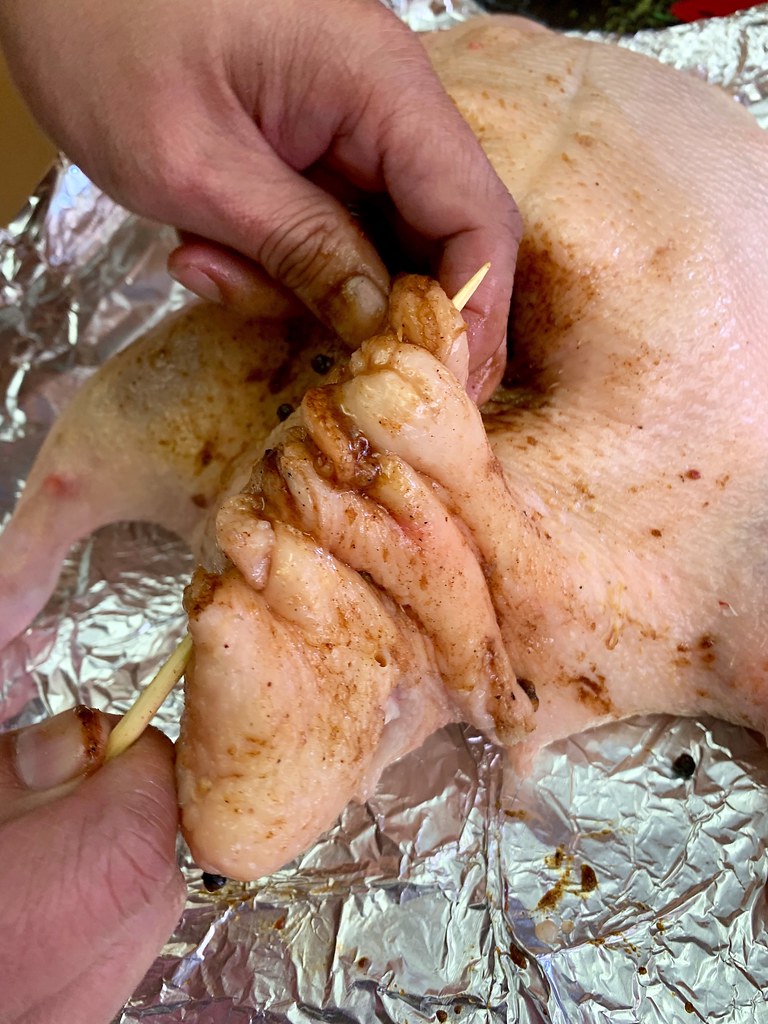 V couldn’t find a wooden skewer to use, so he whittled a wooden chopstick down. Quite industrious I thought and it definitely did the job! 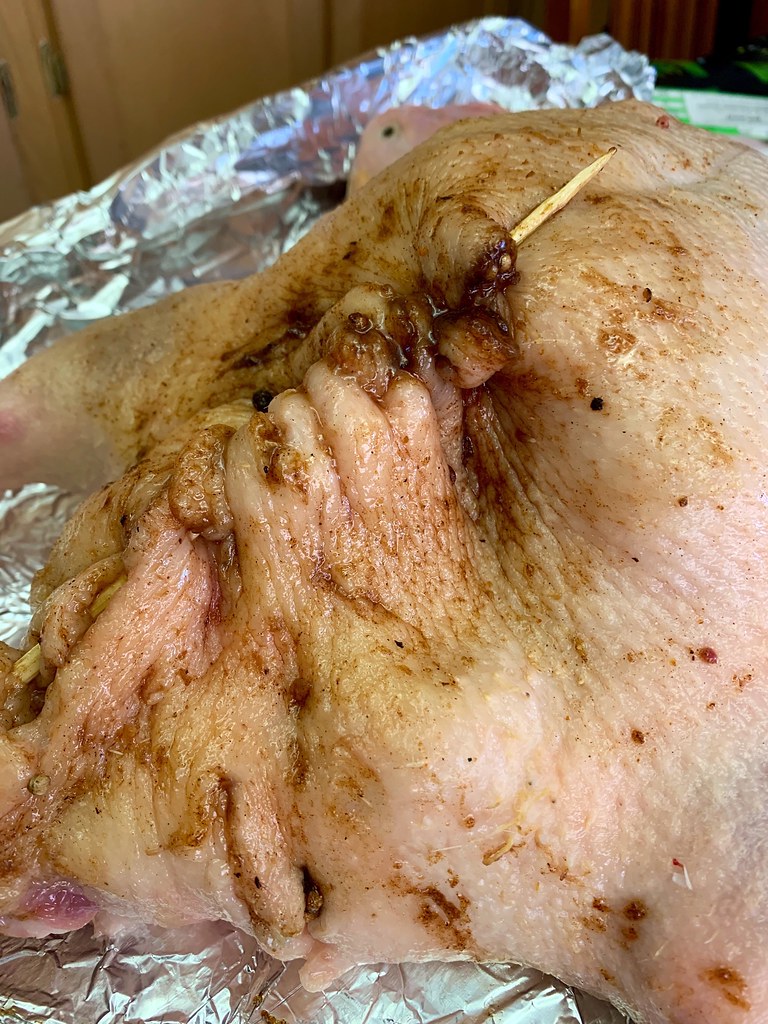 While Brother stitched up Howard, I brought a big pot of water to a boil that included honey, apple cider vinegar and maltose. Maltose is malt sugar and can be found in tubs as shown below at most Chinese/Asian grocery stores. Check the aisles with the honey and jams.

The maltose helps give the duck a nice sheen and color. 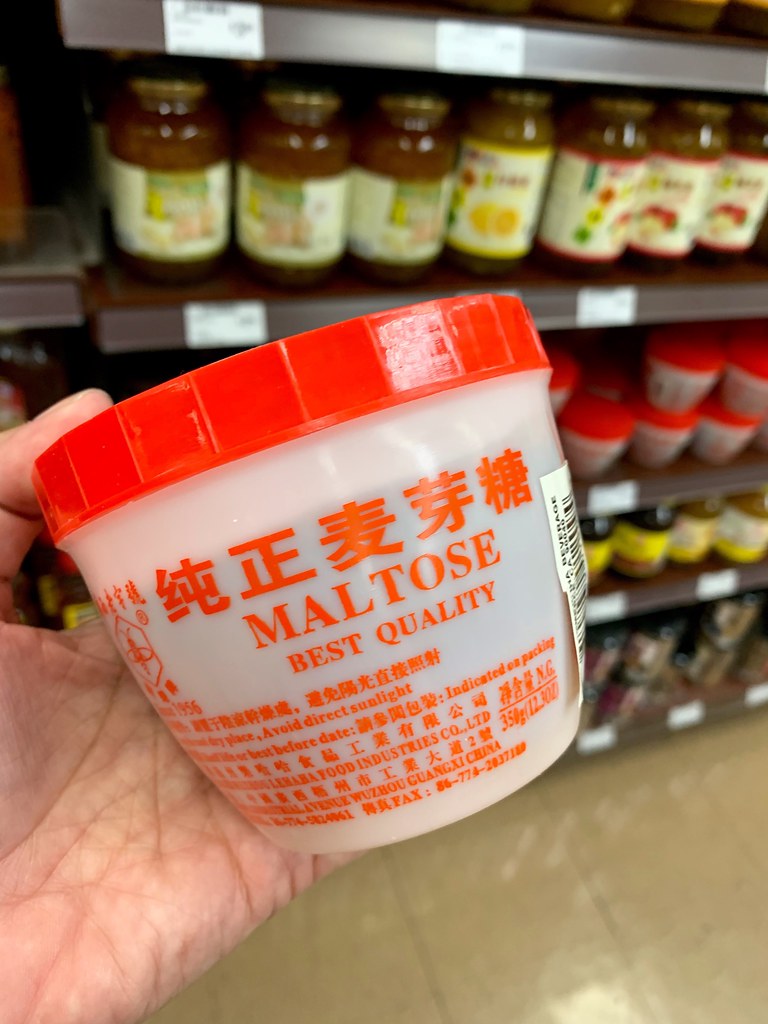 Then it was time for Howard to take a little dip in the jacuzzi.

Okay….I admit, it looks a bit savage but just trust the process.

(ps. I did thank Howard for his sacrifice before we started everything….seemed like the right thing to do at the time.) 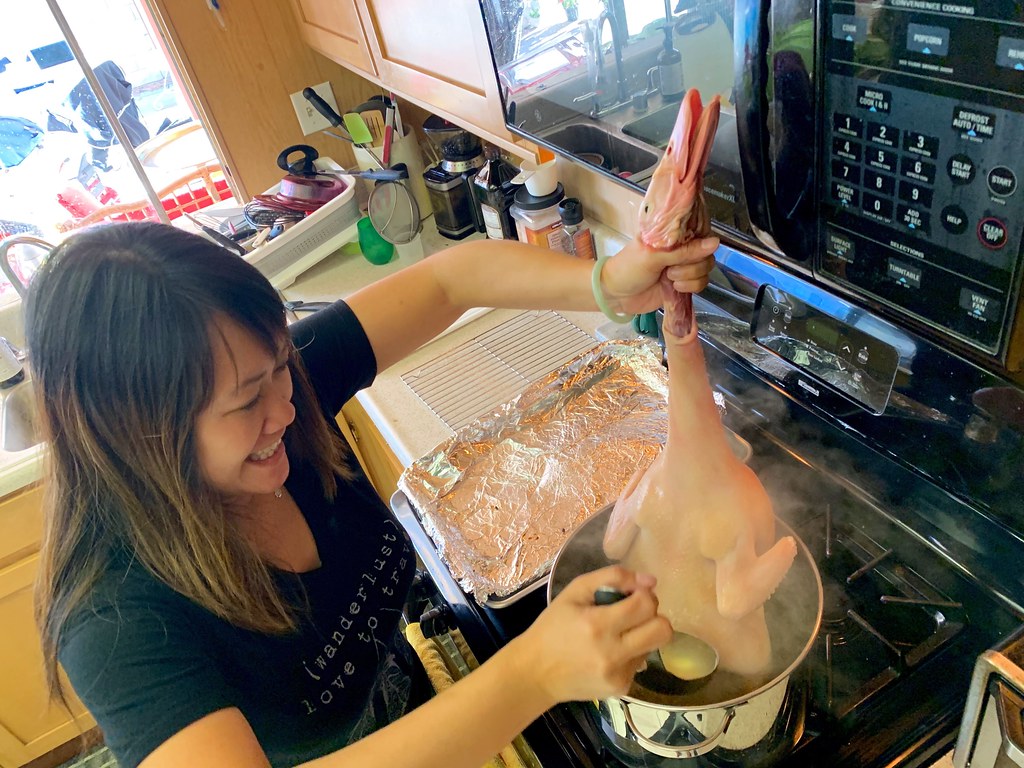 I ladled the boiling liquid over the skin for a few minutes until it tightened and firmed up.

You don’t want to cook the duck but you want to make sure that it’s evenly coated. Again, this dish is all about LOTS of TLC for the skin. 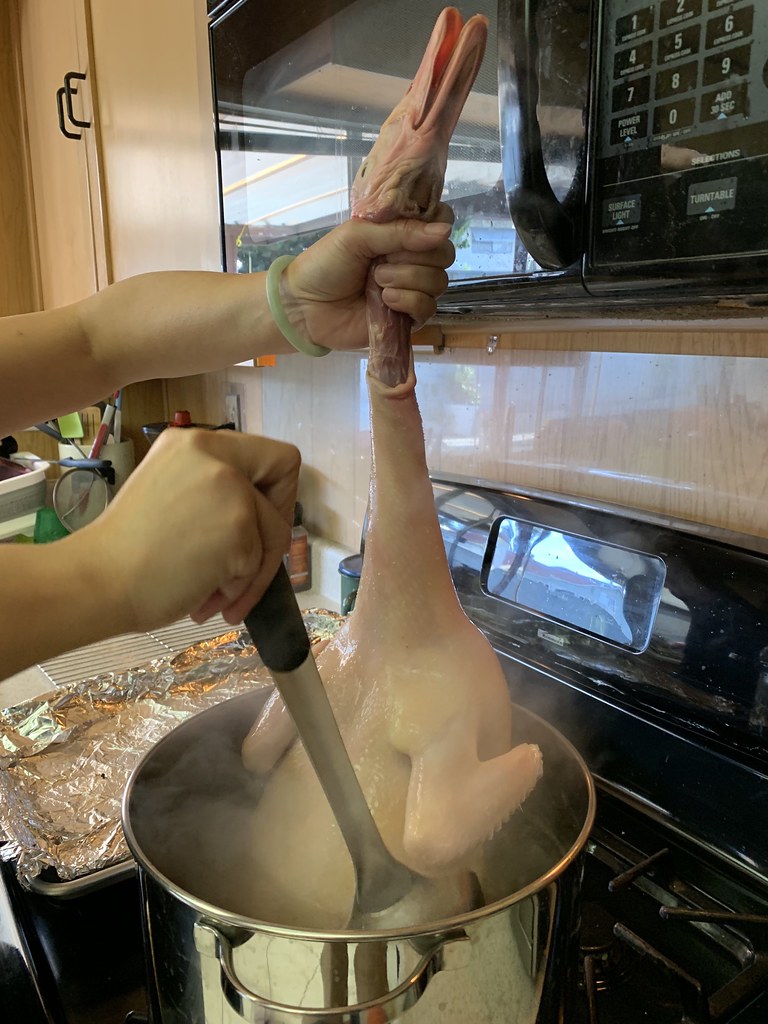 Once the duck was sufficiently scalded, it was placed on a rack over a sheet pan and went directly into the fridge (uncovered) for 3 days for the skin to dry out. 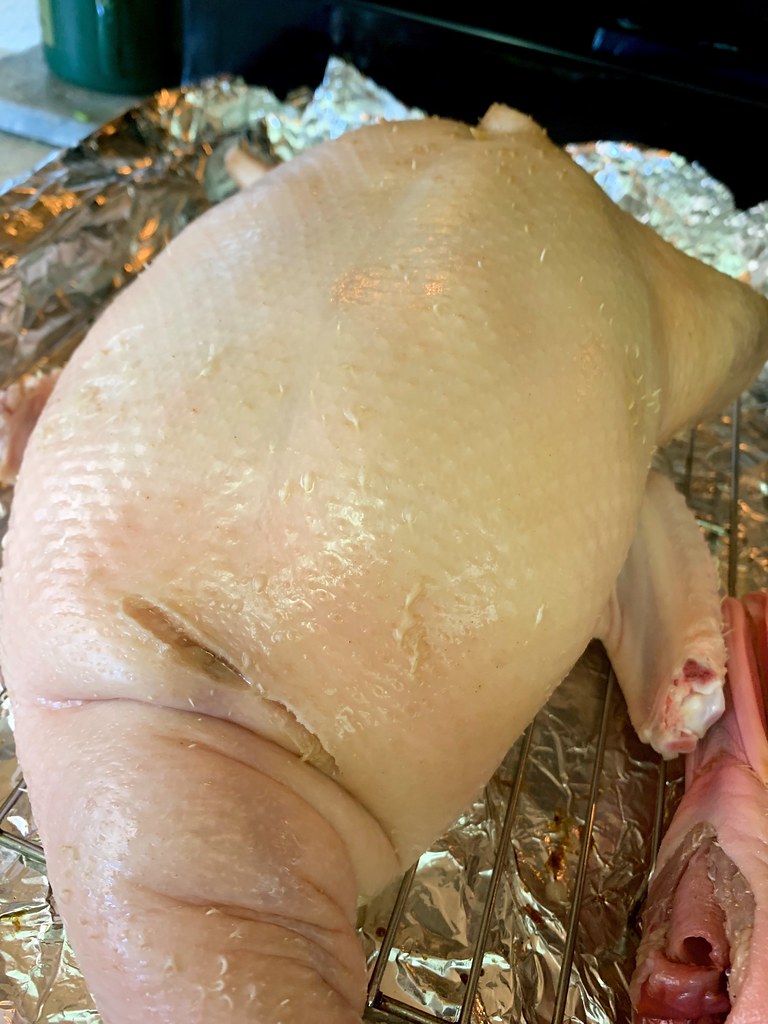 Three days later (Hey–I never said this was quick), we were left with this. The skin was definitely dried and darkened in color – just what we wanted. 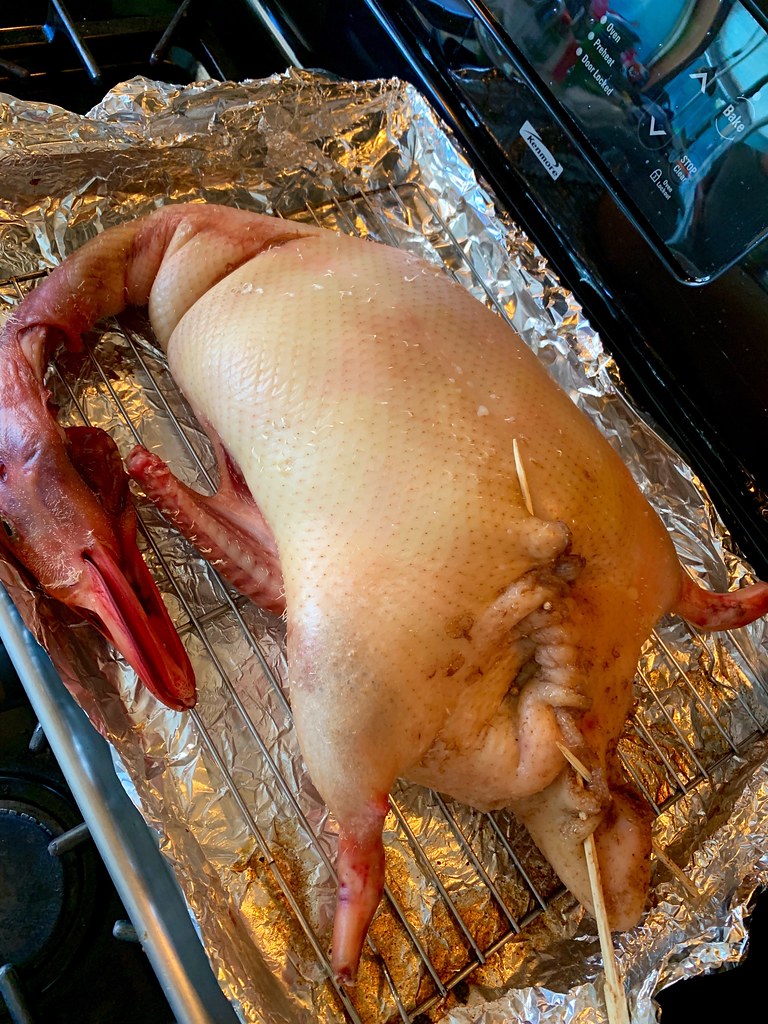 V then fired up his smoker to 350 F degrees with soaked apple and hickory wood. 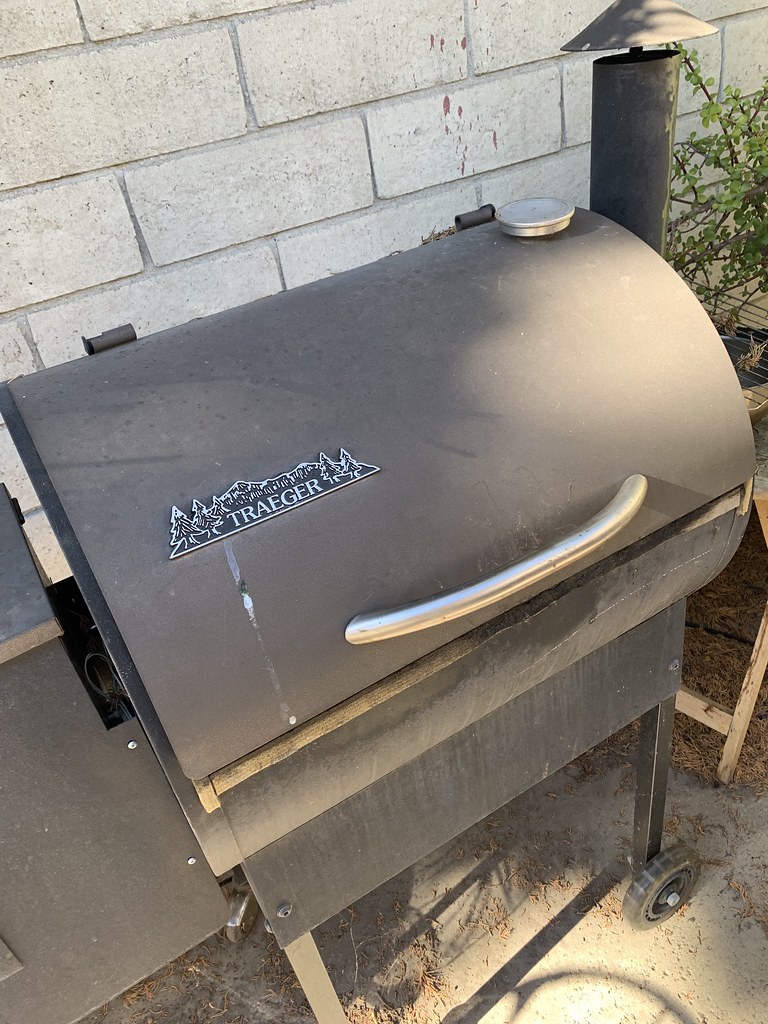 He then proceeded to smoke the duck for about 70ish minutes. 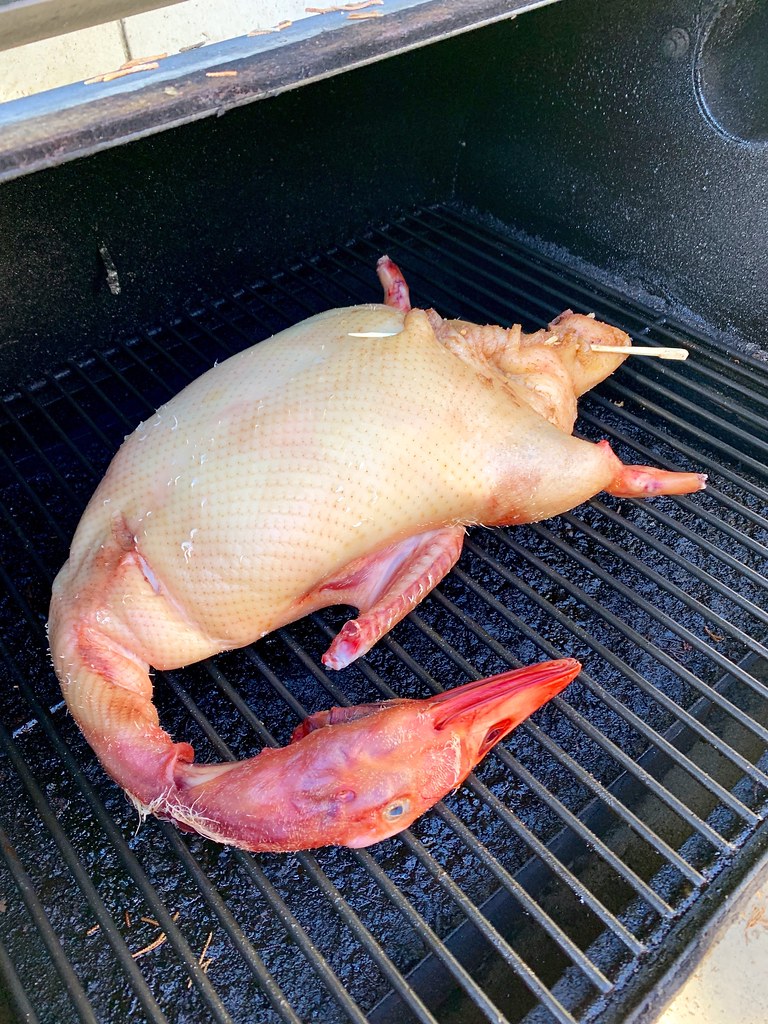 We were a bit concerned because it was much lighter towards the center breast portion. But miraculously in the last ten minutes or so, V said it caught up and became a beautiful dark golden hue all over. 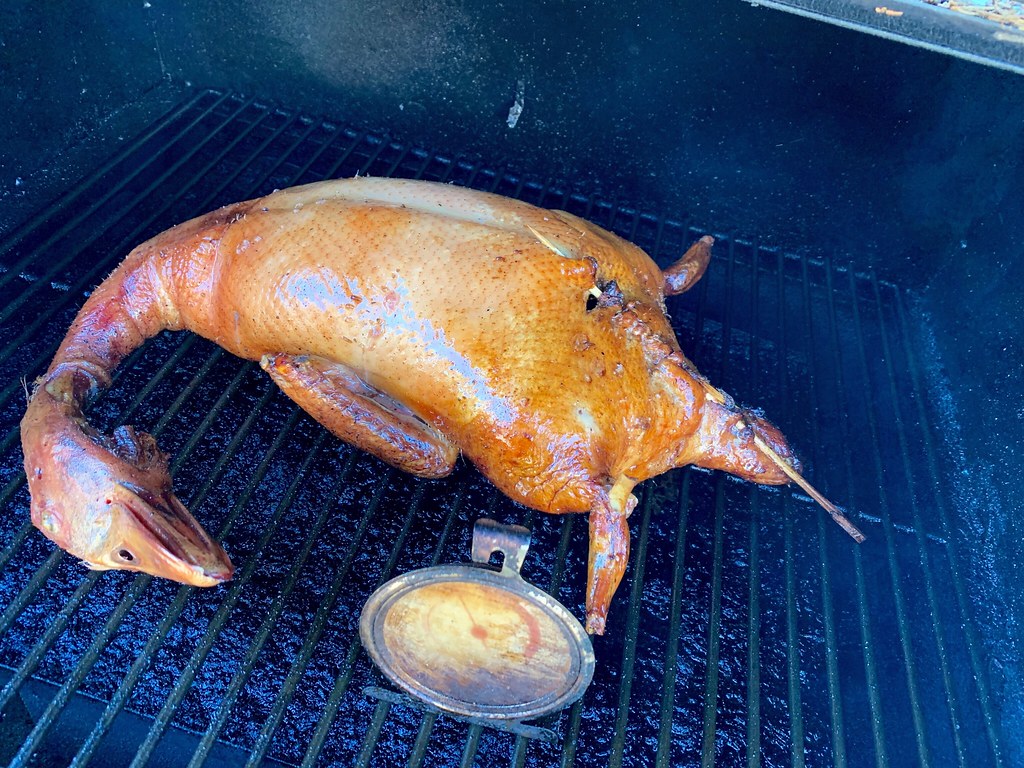 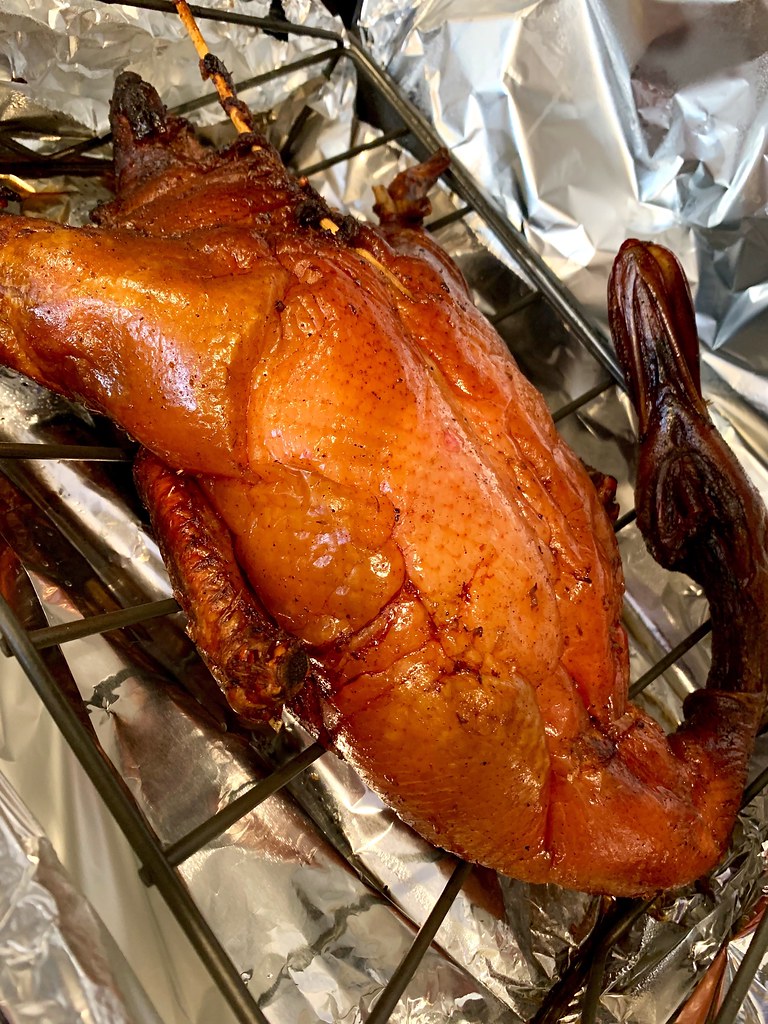 While Howard rested, I made up a batch of flaky scallion pancakes – the perfect accompaniment! 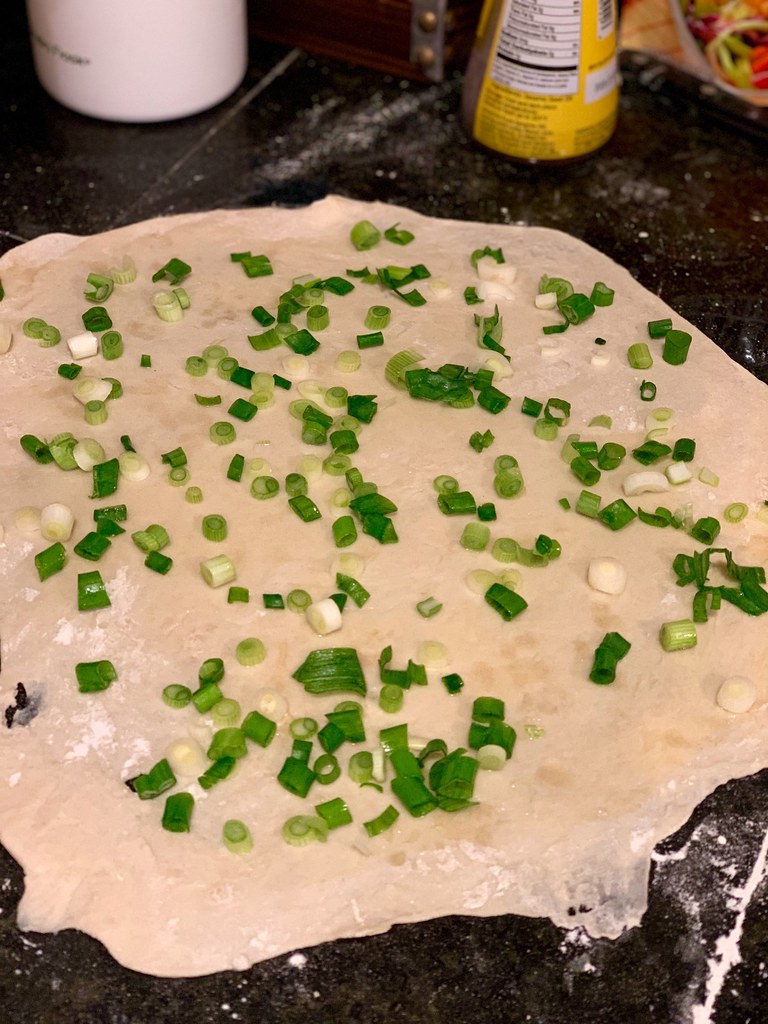 I also sliced up some thin cucumbers and more scallions to go with the duck and put out some hoisin sauce. 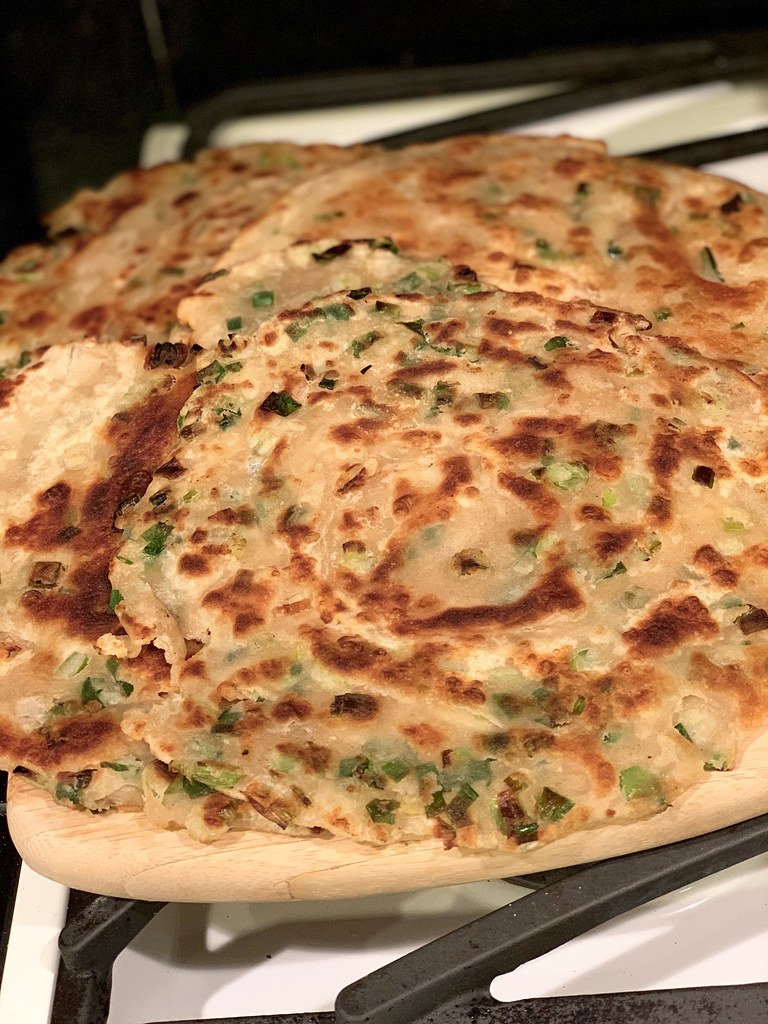 Then we called in Nini and L to do the honors of slicing up the duck. It’s a family affair after all! 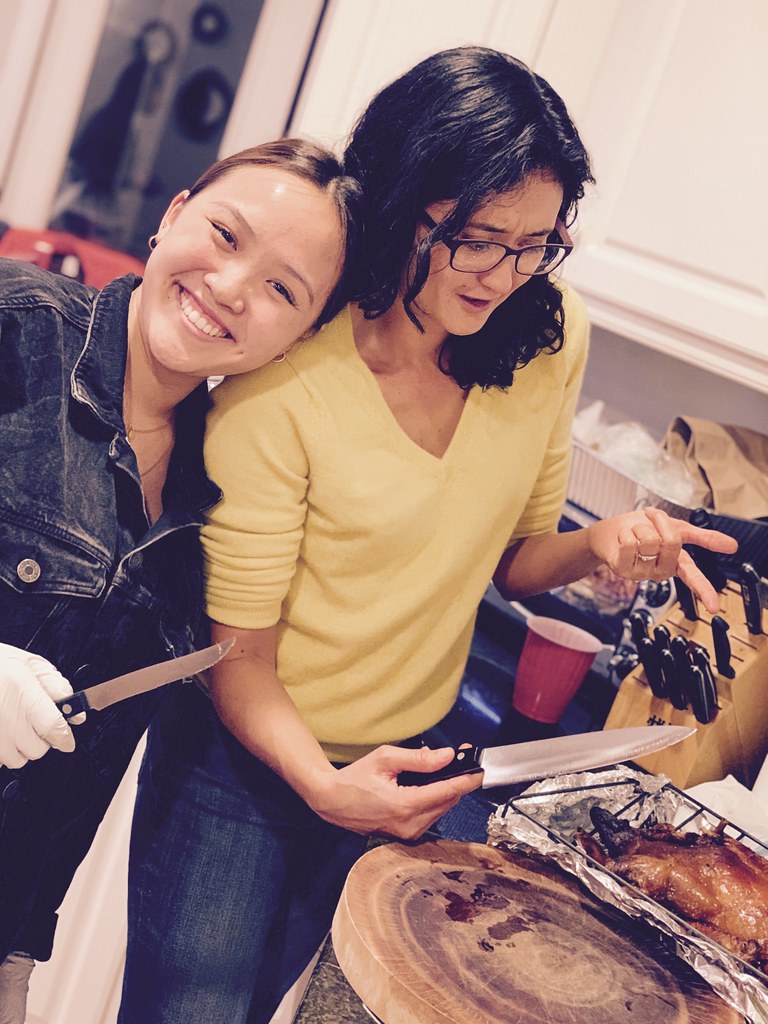 They say traditional Peking Duck should be sliced into over 100 pieces.

But no one’s got time for that! 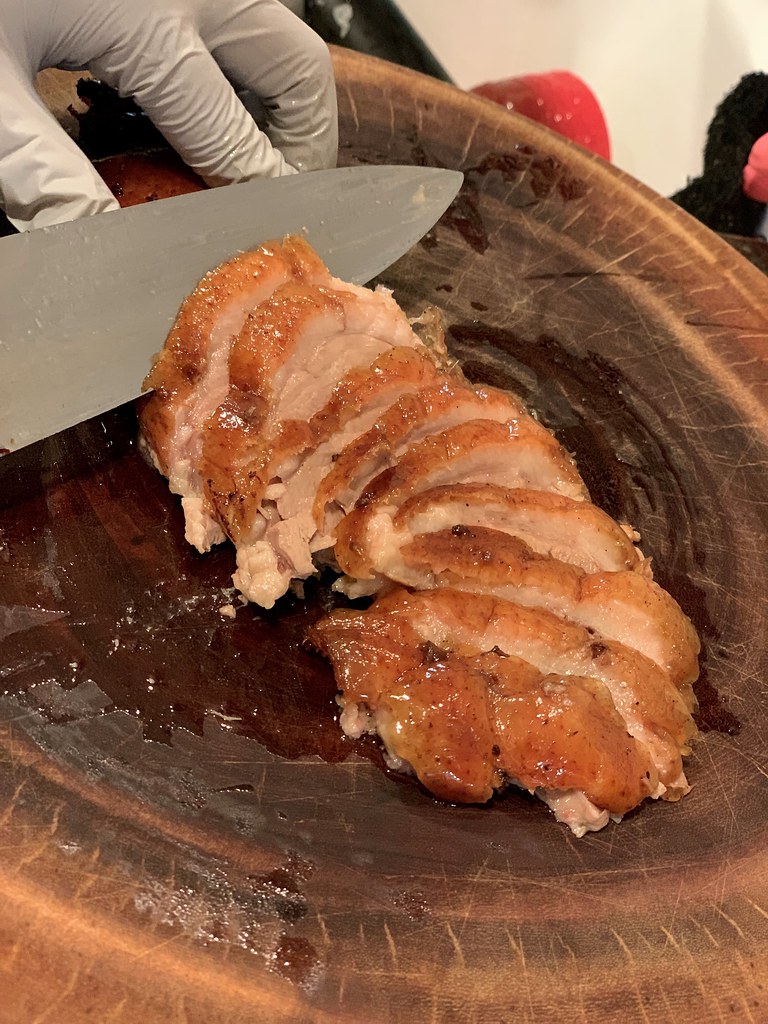 Anyway, I think Nini’s knife-work is just lovely. How many teenagers do you know have such master skills??? 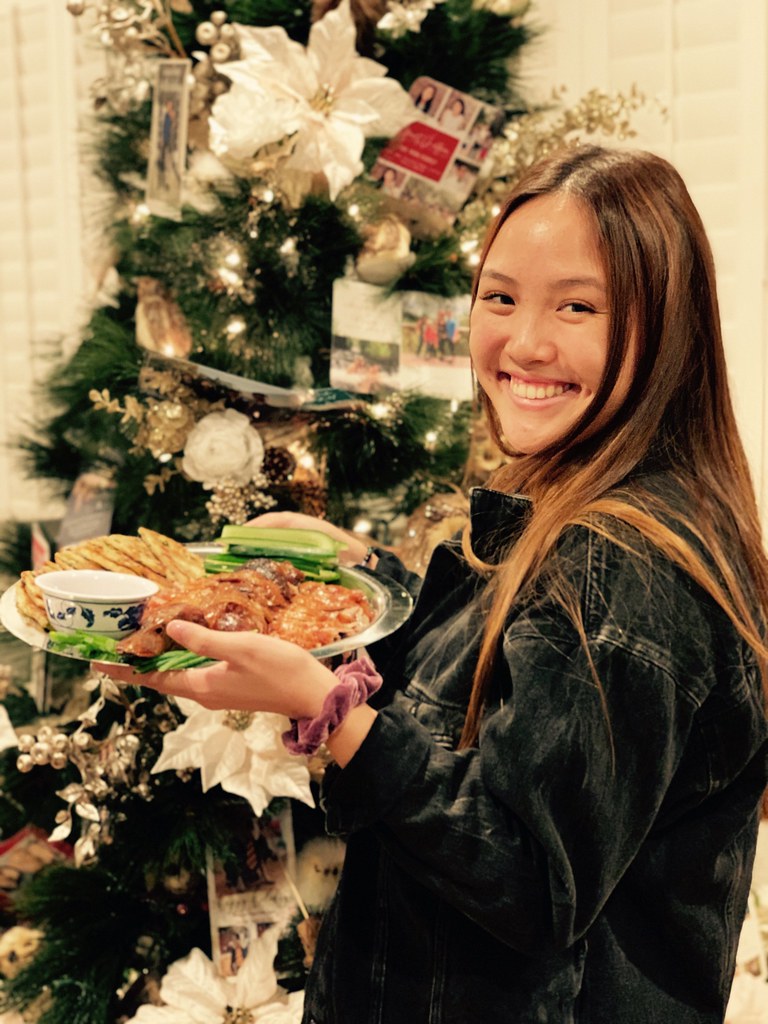 And voila! Howard in all his glory (THANK YOU HOWARD!)…

The duck was really delicious….the meat was moist and the skin was lovely. And when eaten with the scallion pancakes, cukes and hoisin–totally legit!

Check out this quick little recap video I put together—particularly so you can see the whole crazy air compressor situation! You can also see some snippets in my IG Stories Highlights.

All in all, I think we were pretty successful and I wouldn’t shy away from doing this again! Love our crazy Family Foodventures!

❤ BIG THANKS to Harry Soo for the recipe and tutorial. If you’re into BBQ’ing, definitely check out his YouTube channel.

2 thoughts on “Our Adventures with Howard the Smoked Peking Duck”