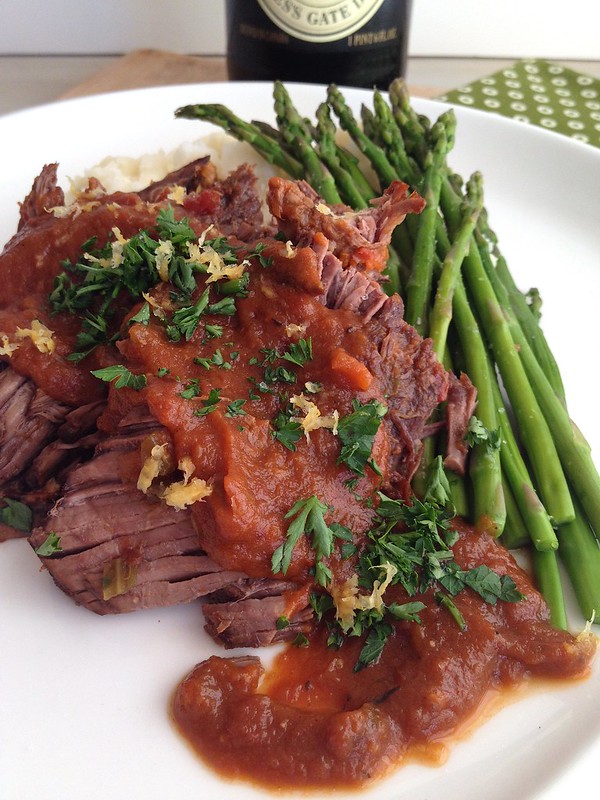 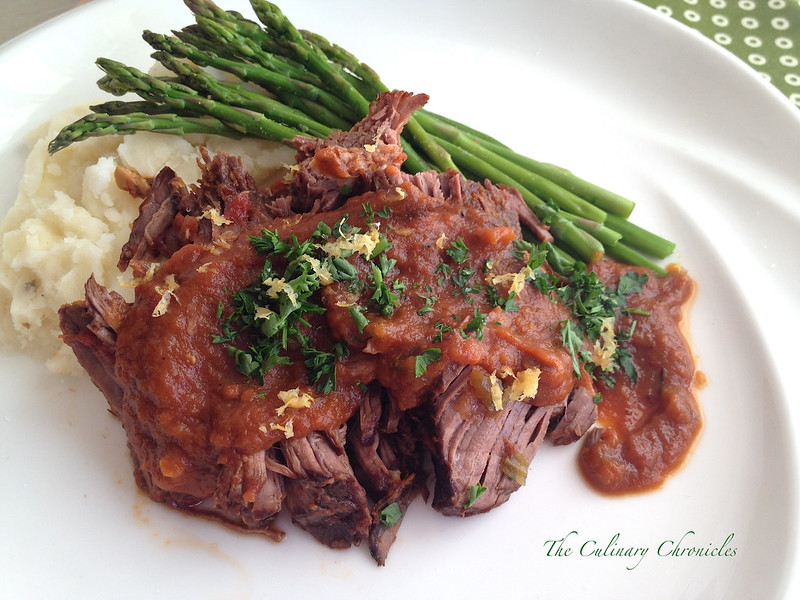 Sorry Gang….I’ve spent the past weekend tinkering around the kitchen with Guinness. I HAD to because today is St. Patrick’s Day and I just couldn’t let y’all down. I needed to share something so deliciously wonderful —that was of course, made with Guinness. 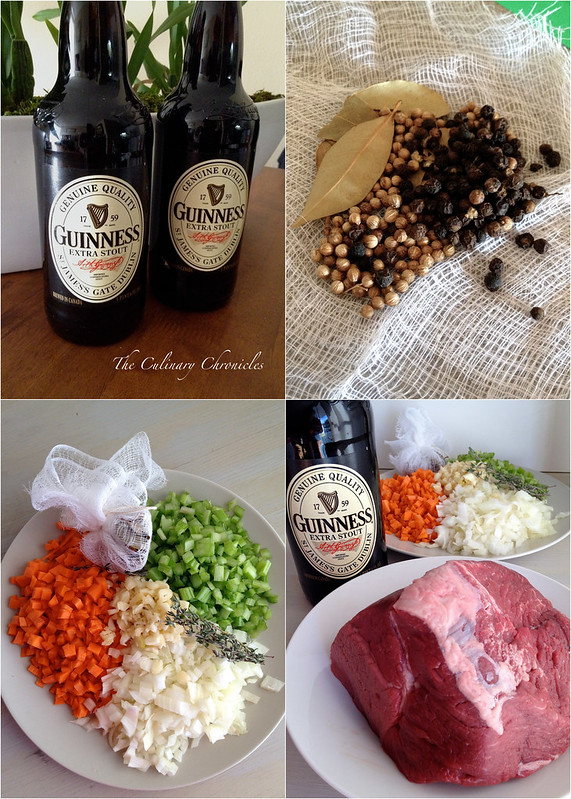 But what was I to make with the thick, wonderfully rich and chocolatey stout?

So many options yet so few hours in a weekend.

And finally, despite the crazy 90 degree heat wave we were having in San Diego, I cranked on the oven to make pot roast.

I figured the sauna-like environment I had created would let me sweat off at least 10 pounds. 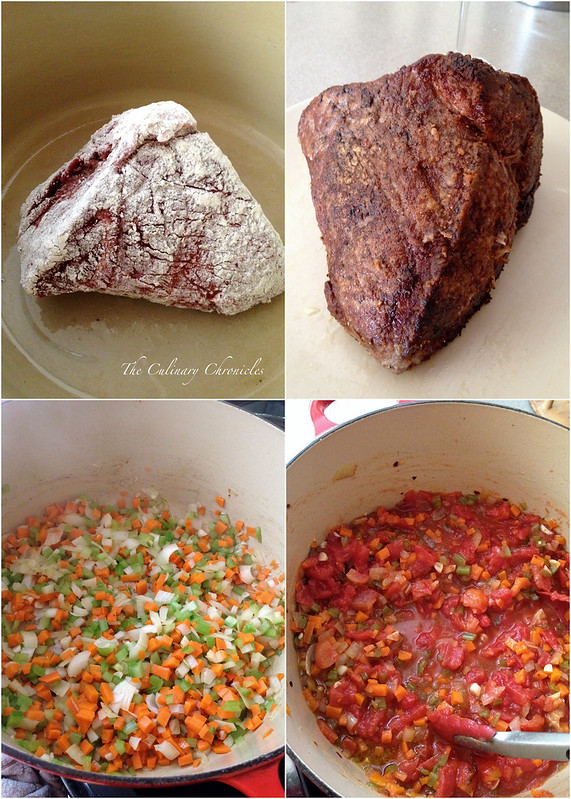 I settled with a fairly straight-forward method for the pot roast. Quick sear of the beef, browning of aromatics, added some liquid and then braised it all in a dutch oven for a few hours. 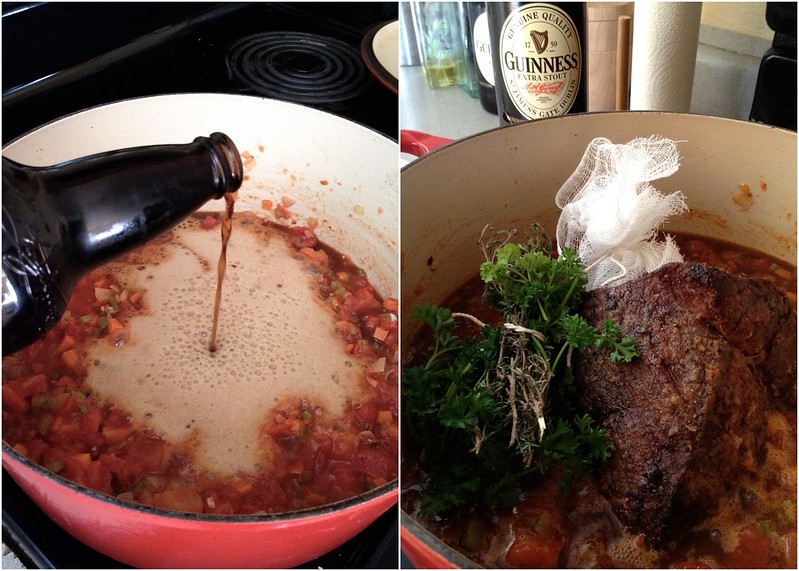 The GUINNESS of course! Plus, the coriander seeds with tomatoes added another level to the flavors that were then punched up with brightness by the fresh parsley and lemon zest to finish it all off. 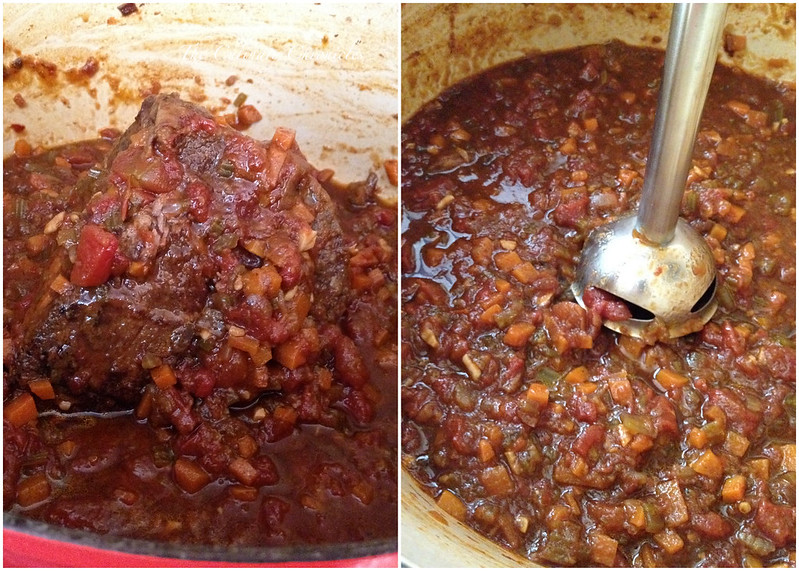 Serve it with mashed potatoes, parsnip puree, polenta –heck, or even as a sammich’! SOOO GOOD! 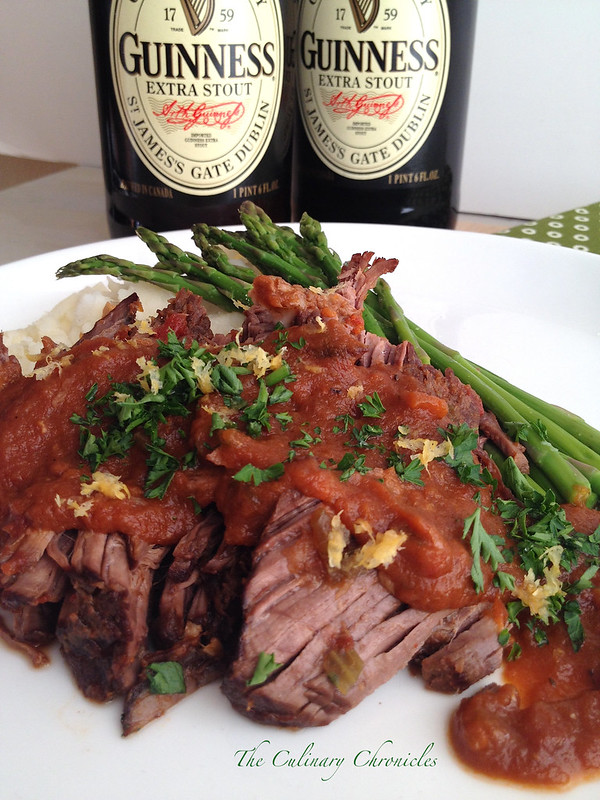 And with that dear friends, have a HAPPY ST.PATRICK’S DAY! Sláinte!

Heavily season the beef with kosher salt and black pepper. Roll the chuck roast in flour and dust off any excess. Heat 3 tablespoons olive oil in a dutch oven or other heavy bottom pot that is oven proof over. Once the oil reaches medium heat, sear each side of the beef until golden brown, about 3-4 minutes each side. Once browned, remove the beef to a large plate.

Add the remaining olive oil to the pot. Add the celery, carrots, and onions and cook over medium heat until softened but not browned, about 7-8 minutes. Add in the garlic, red pepper flakes and cook for an additional 2 minutes. Stir in 1 teaspoon kosher salt, ½ teaspoon black pepper, can of tomatoes with its juices and bring to a simmer. Pour in the Guinness (or other Stout) and allow the liquids to come to a boil.

While the liquids come to temperature, take kitchen twine and tie the thyme and parsley together into a small bundle. Create a sachet with a small piece of cheese cloth and place the black peppercorns, coriander seeds and bay leaves in the center. Bring the corners of the cheese cloth together and use additional kitchen twine to tie the sachet together.

Once the liquids in the pot have come to a boil, place the beef roast back in along with the bundle of herbs and sachet of spices. Allow the liquids to come back to a boil, cover the pot with an oven proof lid and place into a preheated 300 degree F oven. Cook the beef for 3-3½ hours until the meat is fork tender.

Carefully remove the roast to a large plate and cover with foil. Remove and discard the bundle of herbs and sachet of spices. Skim off and discard as much oil/fat from the surface of the vegetables. Using an immersion blender, puree the vegetables until it becomes a fairly smooth sauce. Taste and adjust with additional salt or pepper as needed. If you don’t have an immersion blender, you can use a standard blender or food processor.

Slice the beef – it should be very tender and could be pulled apart with forks. Plate the beef and spoon the sauce over it. Top the beef with chopped parsley and lemon zest. Serve with mashed potatoes, polenta, etc. Enjoy!

It’s that time of the year again. When you see tons of postings in honor of St. Paddy’s Day.

Green colored beer and desserts, shamrocks galore, corn beef recipes, Guinness braised meats, and more! As for me, I went all out last year with our Guinness Chocolate Cupcakes with a Baileys Ganache.

I kind of went overboard with them. They literally SCREAMED St. Paddy’s Day with a decadent Guinness Beer cupcake, filled with a chocolate truffle, with spirals of green Baileys buttercream, topped with shamrock sprinkles and wrapped up in a bright green striped cupcake liner. PHEW! Now that is St. Paddy’s!

Those cuppies were decadently delicious and I wanted to bring them back for this year’s St. Paddy’s Day — but a little more “understated”.

I went for the same moist, stout beer cupcakes and Irish cream flavored buttercream—-however, this time around I opted out of the truffle centers and put away my green food coloring. No need….their yumminess speaks for itself.

I chose a simple large round tip to pipe the frosting this time– a Wilton 1A. But as “understated” as I was trying to keep things, I could not resist breaking out the shamrock sprinkles. After all, I don’t get to use them very often — and who couldn’t use a little more luck?

As for the end results……they were delicious! The dark stout beer adds such a subtle nuttiness to the chocolate cupcakes while the Irish Cream buttercream perfectly rounds out the flavors. And if done correctly, the buttercream is so smooth and rich— a dream to pipe out 🙂

So whether you want to go BIG with the GREEN theme or be a little more subtle, Chocolate Stout Cupcakes are definitely the way to celebrate St. Patrick’s Day!

And with that dear Friends, SLAINTE!!!

Prepare the cupcakes: Put the butter with the stout beer in a sauce pan over medium heat and bring to a simmer. Whisk in cocoa powder until smooth. Cool slightly.

In a large bowl, whisk the flour, sugar, baking soda and salt. In a mixer bowl, beat the eggs and the sour cream together. Add the beer/butter/cocoa mixture and beat to combine. Add the flour mixture and beat briefly just to combine. Using a rubber spatula, fold the batter until completely combined, making sure to incorporate little pockets of flour on the bottom so that the batter is of equal consistency everywhere.

Fill the cupcake liners about 2/3 of the way if you want flatter cupcakes and 3/4 if you want domed. Bake for about 17 minutes, or until a toothpick inserted into the middle of a cupcake comes out clean. Cool completely to room temperature.

Prepare the frosting: In a large mixer bowl, whip the butter for several minutes until very light and fluffy. Slowly add about half of the powdered sugar a few spoonfuls at a time until incorporated. Slowly drizzle the Irish Cream and whip until combined. Add the rest of the powdered sugar until your desired consistency has been achieved.

Assemble: Fill a pastry bag and pipe buttercream on top of cooled cupcakes. Garnish with sprinkles or other adornments. Enjoy!

Note: This makes a lot of buttercream so that you can pipe large mounds on the cupcakes. If you prefer less on your cuppies, halve the amounts.