It’s true, I’m not of Irish descent..…but this Vietnamese Gal considers herself an equal-holiday opportunist and jumps at the chance for all festivities. And who couldn’t use a bit more luck in their lives? 🙂

So when a friend had suggested making Guinness cupcakes awhile ago—I thought I would take a spin with them for this particular holiday. Plus, some of my favorite foodie bloggers have been reviving this tasty treat—and who am I not to trust their judgment? 🙂

After much research, I settled on Smitten Kitchen’s “Chocolate Whiskey and Beer Cupcakes” recipe as I liked the idea of the ganache filling. I substituted Baileys for the Irish Whiskey in the ganache since I had none on hand and didn’t want to pick up a small bottle for the few teaspoons. (Though, I’m sure I could have found some type of use for it!)

The results? P.D.G.—Pretty Darn Good! Seriously! I was a bit concerned that the Guinness would leave a bitter taste to the cuppie—as it usually leaves that flavor on my palette from just a sip. But the other ingredients must have mellowed that flavor out and instead, left a beautifully moist and flavorful end product. The ganache was fabulous too—and quite easy to make. Extremely rich and “truffle-like” in texture and flavor.My only critique was the frosting, although I may be bias as I typically prefer a cream cheese base. Although the Baileys was a great addition, I found the frosting too sweet–even by cutting the confectioner sugar amount in half. Next time, I’ll stick with the cream cheese base 🙂

Also, at the next go-around, I may add Baileys Mint Chocolate Cream liquor to the ganache and some mint extract to the cakes for a different spin. Mint Chocolate is one of my favorite combos 🙂

So to all my peeps out there –Wishing you a very Happy St. Patrick’s Day filled with luck and tasty cupcakes!

Measure out 1 Cup of Guinness–or your preferred Stout Beer

Bring to a simmer with 1 Cup of Unsalted Butter

Whisk in 3/4 Cup of Cocoa Powder

Line your cupcake pans with paper cups. I chose these cute green-striped greaseproof ones to add the festivities 🙂

Bake at 350 degrees. Mine took 19 minutes and were cooled on racks for 30 minutes.

Time to prep the ganache! 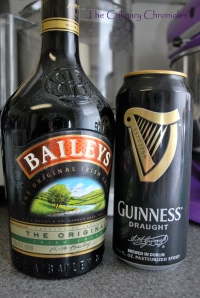 Of course I added a bit of Baileys to the ganache 🙂 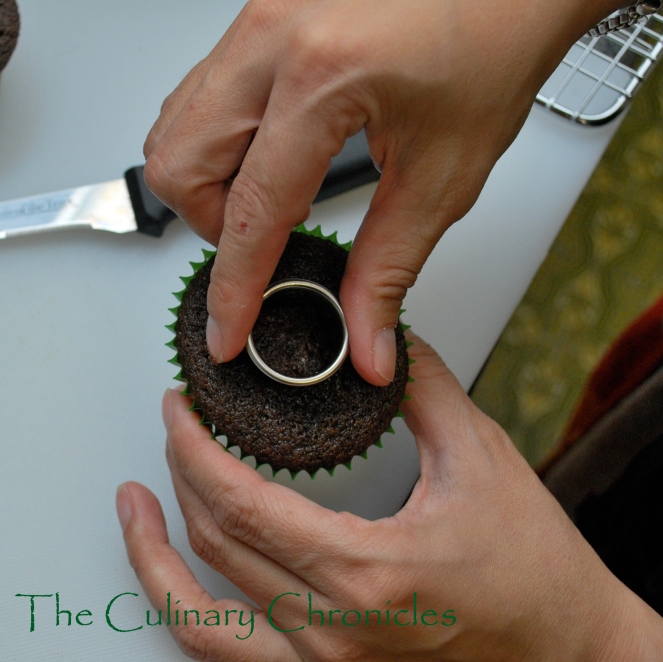 Using a Wilton #12 Round Tip, pipe ganache in the centers 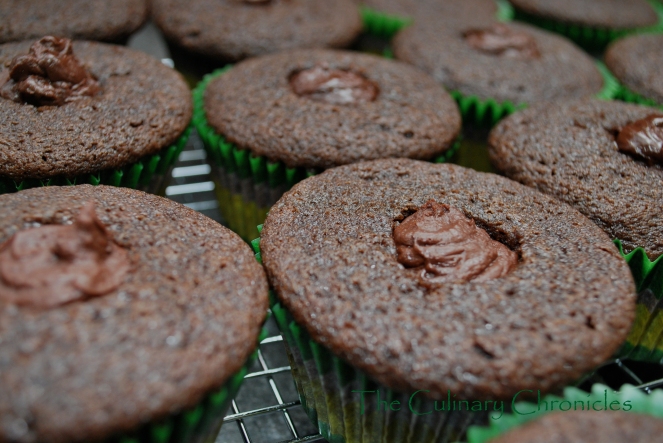 Pipe or Ice the cuppies with your Baileys Buttercream 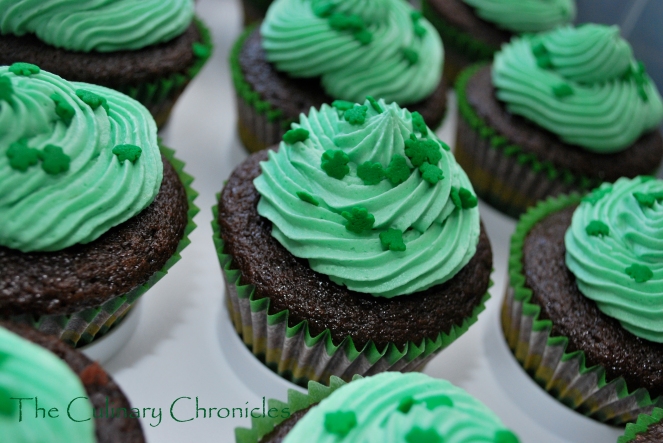 Make the cupcakes: Put the butter with the beer in a sauce pan over medium heat and bring to a simmer. Whisk in cocoa powder until smooth. Cool slightly.

In a large bowl, whisk the flour, sugar, baking soda and salt. In a mixer bowl, beat the eggs and the sour cream together. Add the beer/butter/cocoa mixture and beat to combine. Add the flour mixture and beat briefly just to combine. Using a rubber spatula, fold the batter until completely combined, making sure to incorporate little pockets of flour on the bottom so that the batter is of equal consistency everywhere.

Fill the cupcake liners about 2/3 of the way if you want flatter cupcakes and 3/4 if you want domed. Bake for about 17 minutes, or until a toothpick or a slim knife inserted into the middle of a cupcake comes out clean. Cool completely to room temperature.

Make the filling: Chop the chocolate and transfer it to a heatproof bowl. Heat the cream until simmering and pour it over the chocolate. Let it sit for one minute and then stir until smooth. Add the butter and whiskey (if you’re using it) and stir until combined.

Fill the cupcakes: Let the ganache cool until thick but still soft enough to be piped. Using your 1-inch round cookie cutter or an apple corer, cut the centers out of the cooled cupcakes. I went about half to 2/3 of the way down and used a small knife to help me extract the centers. Put the ganache into a piping bag with a wide tip and fill the holes in each cupcake to the top.

Make the frosting: In a large mixer bowl, whip the butter for several minutes until very light and fluffy. Slowly add the powdered sugar, letting it incorporate, until the butter becomes thicker and stiff (you will know when this happens). Slowly drizzle the Bailey’s (or milk or cream or a combination thereof) and whip until combined. Add green food coloring to desired hue. Ice and decorate the cupcakes.

Sneak peak inside the cuppies. The Baileys Ganache was really yummy and tasted like Truffles!