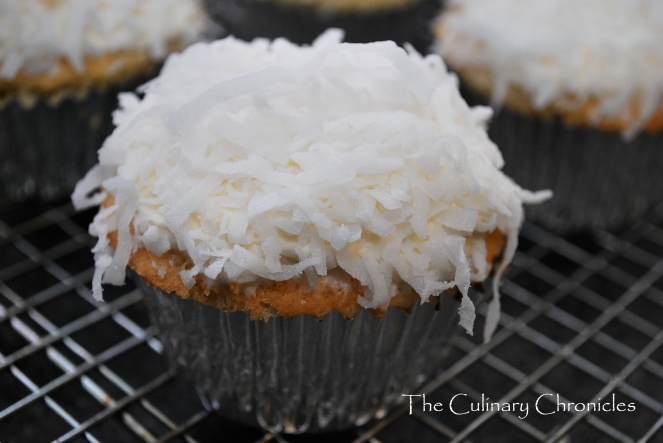 I’ve been on a serious coconut kick lately…..I don’t know. Maybe it’s my inner-self willing for the warm weather of the tropics during this chilly winter. 🙂

I decided to give Martha Stewart’s recipe for Coconut Cupcakes a spin. She actually has two posted on her website but I opted for this particular one since it didn’t require egg white/meringue. I’m lazy sometimes….guilty as charged 🙂  I did slightly tweak her recipe a bit to add more coconut flavor and ended up frosting it with my Coconut Cream Cheese Frosting.

After I had pulled them out of the oven and set them on racks to cool, I became somewhat alarmed as a few of the sides of the cakes began pulling from their liners. Eh…oh well. That’s what frosting is for, right? But after one bite–I was SOLD! I LOVED this cupcake. Somewhat dense in texture (perhaps from the coconut milk?) and infused with wonderful coconut flavor! Since I opted for a simple frost versus piping the frosting, it was not the least bit over sweet. YUMMY, YUMMY, YUMMY!

This one will definitely be kept in my favorites folder. I hope you enjoy it, too! 🙂

The Coconut Milk that I used

Light layer of frosting after the cupcakes have thoroughly cooled. No fancy piping this time 🙂 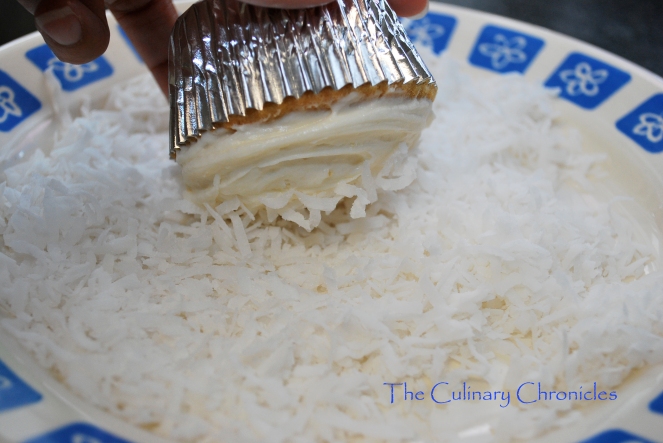 Dipping the cupcakes in the Shredded Coconut

Make sure to thoroughly cover the cupcakes 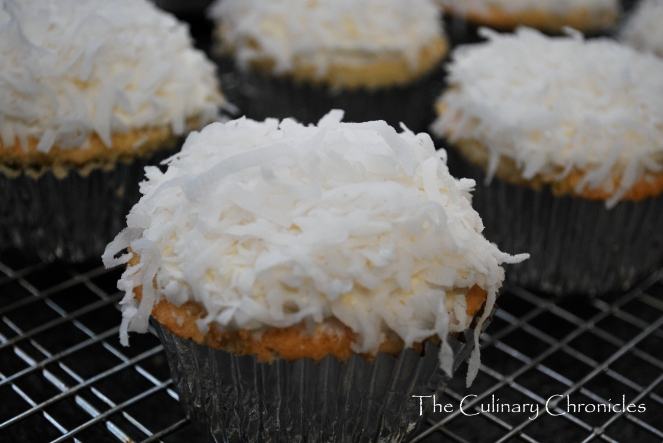 Preheat oven to 350 degrees. Line standard muffin tins with paper liners. Whisk dry ingredients in a large bowl. Add shredded coconut to flour mixture. Cream butter and sugar with a mixer until light and fluffy. Add eggs, 1 at a time, beating after each addition.

Reduce speed to low. Mix any remaining wet ingredients in a bowl if needed. Add dry ingredients to butter mixture in 3 additions, alternating with wet ingredients and ending with dry. Scrape sides of bowl. Divide batter among muffin cups, filling each 2/3 full.

Bake cupcakes until testers inserted into centers come out clean, about 20 minutes. Let cool in tins on wire racks.

While cupcakes are baking, prepare the frosting. In an electric mixer fitted with the paddle attachment, cream together the cream cheese and butter until fluffy.  Add coconut extract, coconut milk and then gradually add in the confectioners’ sugar, ½ cup at a time. Continue adding sugar to desire consistency. (I used only 5 cups this time since I didn’t need the frosting to be as firm as when I pipe it). Refrigerate for at least 10 minutes before use.

They are JUST as tasty in Mini Cupcakes form, too 🙂