Our travels to New York left us quite weary and in need of some substantial rest. With that said, the BF still managed to take his gal out for a romantic Valentine’s Dinner—the same lovely spot that we had celebrated our 1st Valentine’s Day 4 years before. 🙂 What a sweetie.

A few days later, I decided to pull together dinner to reciprocate the love and extend the Valentine’s Day celebrations. I admit my final entrée wasn’t exactly what I had in mind at first. In fact, I had hoped to try my hand at a crispy duck breast but after 5 stores later (which included poultry shops and specialty stores) I was left “duckless”. Who knew duck would be so hard to find—especially non-frozen ones? I’ll definitely have to plan a week ahead next time. 🙂

I settled on making a rack of lamb but served it with a side dish that I hadn’t used before—polenta. After all, my 2010 Foodie Goal was to cook with an ingredient that I had never previously used…..and for February, it was polenta.  As opposed to our regular lamb chops preparation, I went with a traditional marinade of rosemary-garlic-lemon zest & juice-olive oil. I was hoping this brighter flavor would compliment the sautéed mushroom medley and polenta cakes.  (The latter was inspired by my dear cousin—author of Nutrition to Kitchen).

But I believe the star of the evening was dessert…..a Dark Chocolate Torte with a Cabernet-Berry Coulis. Rich, decadent, divine, and just screamed of Valentine’s after plating. Hey, I needed to pull out the big guns since I couldn’t produce the duck. 🙂

The results? I believe the BF was very happy with our dinner—particularly with dessert as he kept on repeating, “This is craaaazzzyyy….”. I took that for “crazy good” than “crazy bad” as he had a second helping of dessert. 🙂

Lessons learned from this dinner:
1) When attempting something “special” or out of the ordinary, plan ahead;
2) When things don’t go as planned, don’t be afraid to quickly jump to Plan B;
3) Chocolate and Wine makes EVERYTHING better;
4) Don’t wait for only Valentine’s Day to show someone you love how much you care about them.

Here’s to 365 Days of Valentine’s Celebration!

*Note: I’ve only included my preparation of the Dark Chocolate Torte with the Cabernet-Berry Coulis as this was the extra special component to dinner 🙂 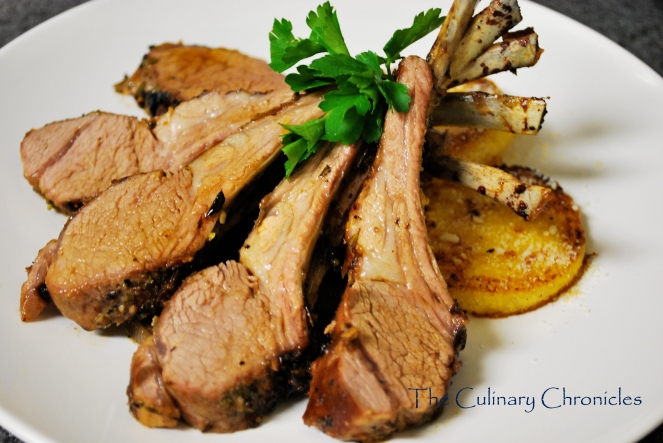 Preheat oven to 350° degrees. Using a 9-inch spring form pan, generously cover the bottom and sides with cooking spray and line bottom with parchment paper. In a microwave safe bowl, melt chocolate chips with butter in 20-30 second intervals in the microwave. Be sure to stir the chocolate between each interval and be careful to not burn the chocolate as different ovens vary in temperature. Melt and stir until smooth. Whisk in cocoa and espresso and cool for 15 minutes.

In a stand mixer, beat eggs and sugar on high speed until extremely thick. I did this for about 8-9 minutes. Gently fold in chocolate mixture and be careful not to deflate egg mixture. Pour batter into prepared pan.

Bake torte until tester inserted into center comes out with some moist batter attached, about 40 minutes. Don’t be alarmed if it looks cracked. Cool in pan on rack for at least 1 hour—the center of the torte will drop. Using a long thin knife, run blade along the sides of the pan to assist in releasing the cake and remove sides. Place plate on top of torte and flip onto plate. Remove pan bottom and peel off parchment paper. Continue to cool at room temperature.

While torte is cooling, place all coulis ingredients in a medium sized, heavy saucepan. Simmer on medium-low until berries have broken down and the wine has cooked off. Approximately 10-15 minutes. Let cool.

To serve, slice torte into wedges and spoon coulis on top.

**Use the highest quality chocolates and cocoa powder when possible. This will add to the intensity of flavor to your final product.