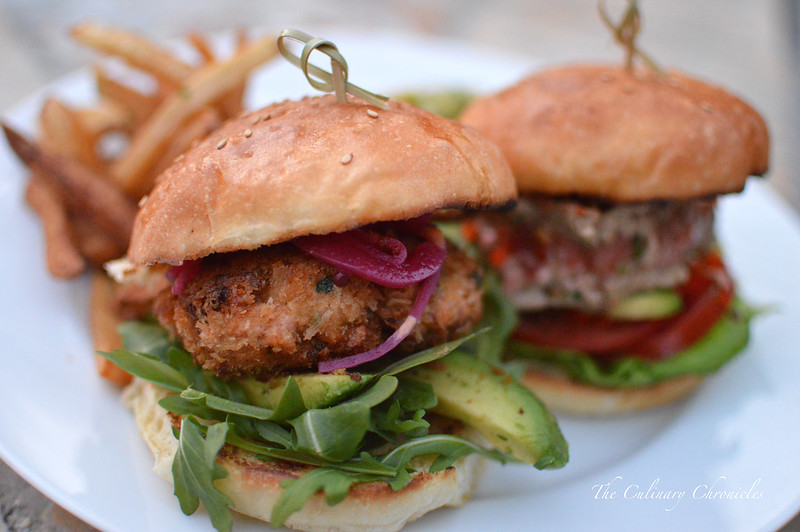 April’s Family Dinner was my brother-in-law, Curtis‘, choice as his birthday was just a few days away. And when given the option, Curtis nearly always picks seafood.

We casually brainstormed at the last Family Dinner, throwing out seafood ideas we could potentially make. Initially we were going to tackle some whole fish baked in a sea salt dome but a few weeks ago, I met up for lunch in Newport Beach with some friends at Dory Deli. I had a delicious Ahi Burger and it inspired me to convince the sibs to change our menu. 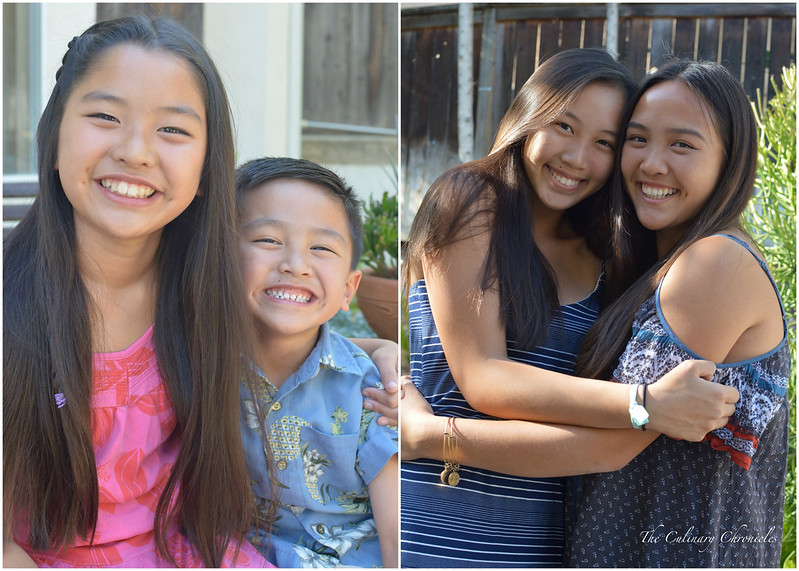 Since we were all attending my Uncle’s retirement party that Sunday, we had our Family Dinner on a sunny, Saturday afternoon at my seester’s house in Orange County. On days like those, we try to take advantage of the warm weather and enjoy their wonderful backyard.

Lately, I also have been feeling like our lil‘ munchkins will soon become old munchkins–which has motivated me to take even more pictures of them to try and preserve these moments.

Oh, that’s right…we need someone to take care of us during our senile years. 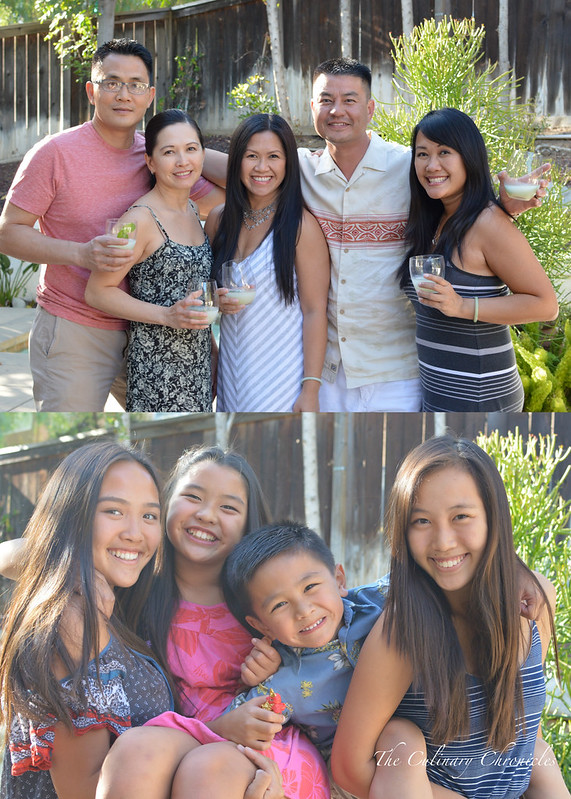 The adults sipped on Lychee-Mint Martinis while we prepped and caught up on life. They’re a light and refreshing martini that can be a bit dangerous because you don’t realize how strong they are until you’ve had a few.

They’re a spin off my Lychee Saketinis but with added herbal notes from the fresh mint that is pureed with the lychees and a heavy hand of fresh lime juice. 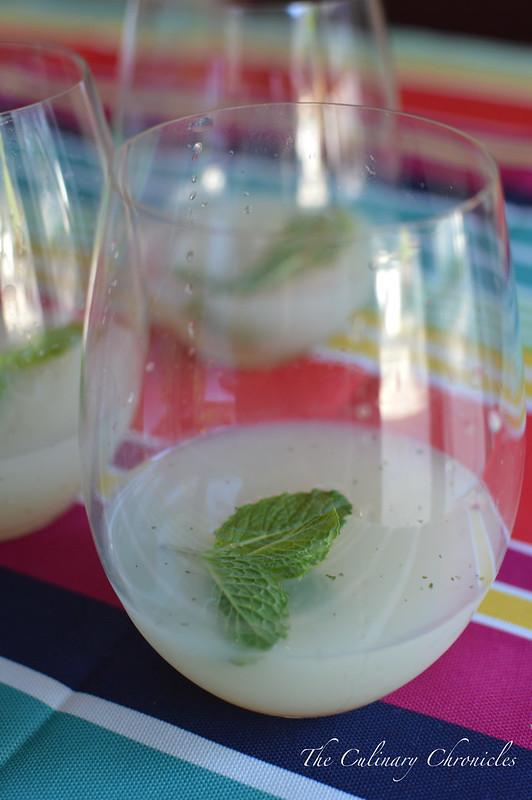 To nosh on, big seester wrapped tender asparagus with slices of salty prosciutto and roasted them in the oven. When she wasn’t looking, I sprinkled finely grated parmesan cheese over the asparagus during the last few minutes while it roasted to add a bit more umami.

I kind of hate myself a little any time I use that phrase but alas…how else can you describe it? 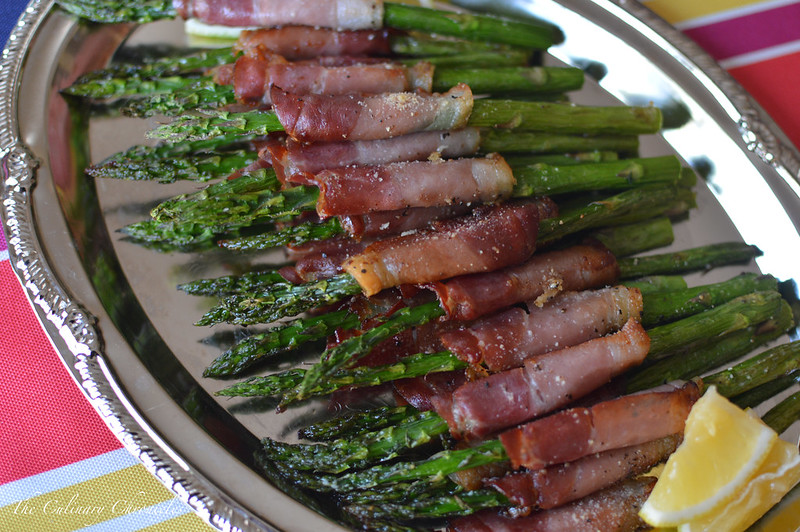 Since we were having burgers, we thought onion rings would also be a nice addition. But then big seester said…

“STEP UP YOUR GAME! Fry up a Blooming Onion instead!”

Okay…she may not have said it that way, but that’s what I heard when she was talking to me. 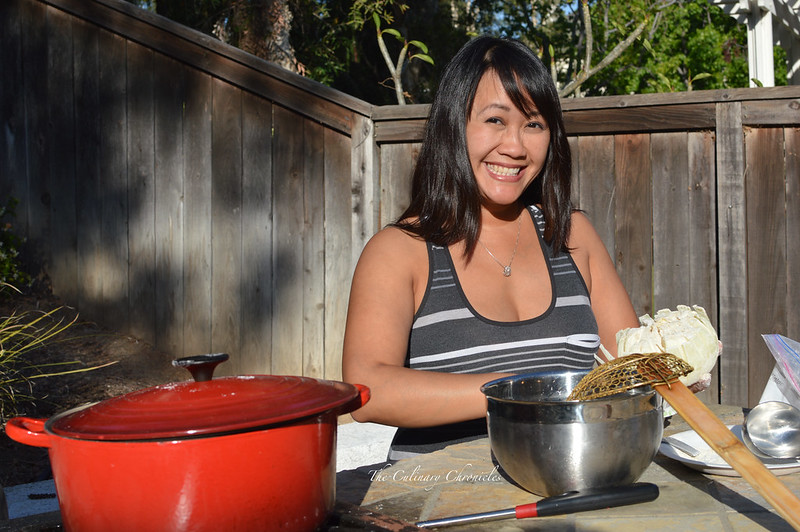 But between you and I, I didn’t get as pretty of a “bloom” as I usually do. Partly because I didn’t dredge it enough and partly because I should have used a smaller pot to help the onion stay a little more intact. It still tasted good but looked more like a flattened sunflower instead of a full dahlia.

For the recipe and pics of how it should have looked, meander on over here. 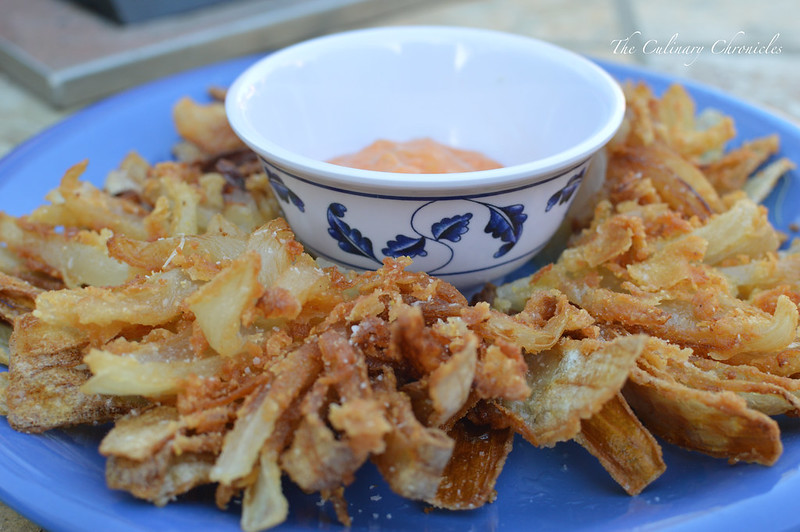 With a little food in our bellies and libations in our veins, we set about on a little bit of shenangians. 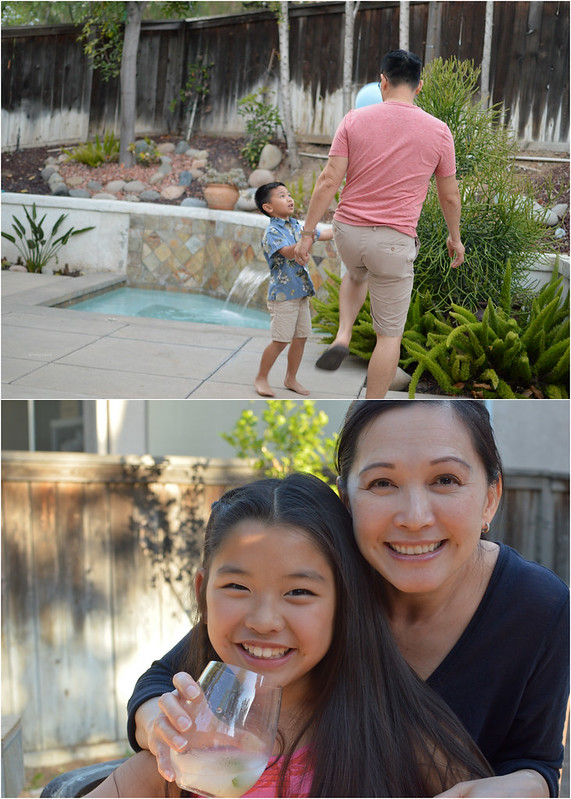 And there may have also been a little bit of backyard dancing that was involved. Because who doesn’t want to shake their booties to a little 90s R&B?

Eventually we turned our focus back on to dinner because the munchkins morph into Gremlins if they aren’t fed at regular intervals. 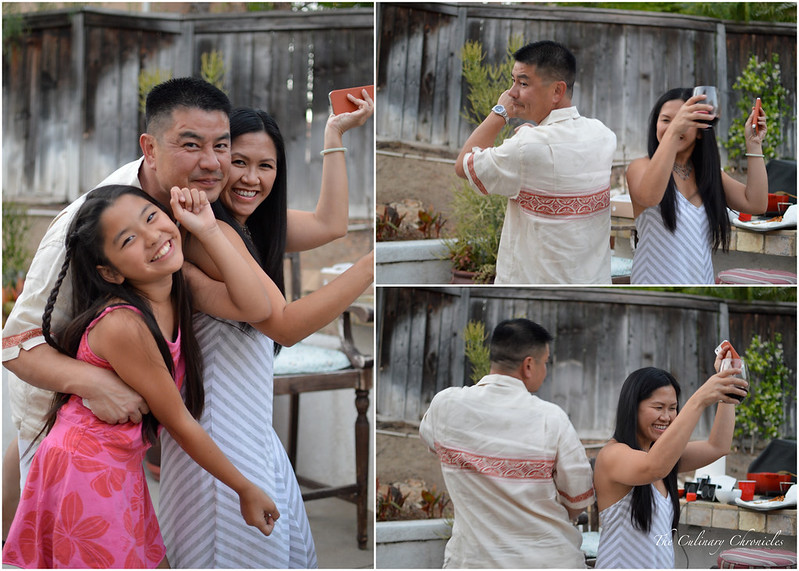 Since the main star of our meal were to be burgers, I volunteered to bake the buns. I was well aware of the heavy responsibility I signed up for but let’s face it. You can have a fantastic burger “patty” but if the bread is terrible, you’re a super sad panda.

Luckily, I stumbled upon a fantastic Brioche Bun recipe from Comme Ça. They were perfect and will now be my go-to recipe for burger buns. I’ll be sharing the recipe and my adventure with them soon.

We also snagged a few Squid Ink Rolls from 85c Bakery Cafe which is an incredibly popular Taiwanese bakery pumping out delicious breads and pastries around the clock. The roll itself is a bit shocking at first glance as it’s a deep black color. However, one bite into the soft roll and any negative misconceptions will be forgotten. They’re scrumptious and should not be passed up on if you happen to stop by one of their bakeries. 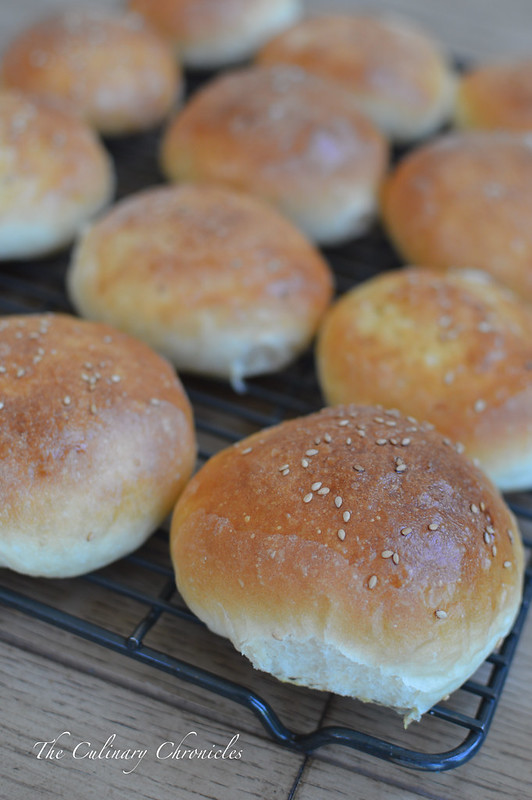 As for the “patties”, we prepared two types of fish.

The first were Chipotle Salmon Patties from How Sweet It Is. Roughly ground salmon with tons of spices, adobo sauce and parsley. The initial recipe called for the patties to be rolled in crushed tortillas chips before pan-frying them but we opted to use panko bread crumbs instead. These patties were served with a chipotle mayo.

The second were thick Ahi Steaks that were lightly marinated and then grilled–still keeping the centers beautifully pink and rare. 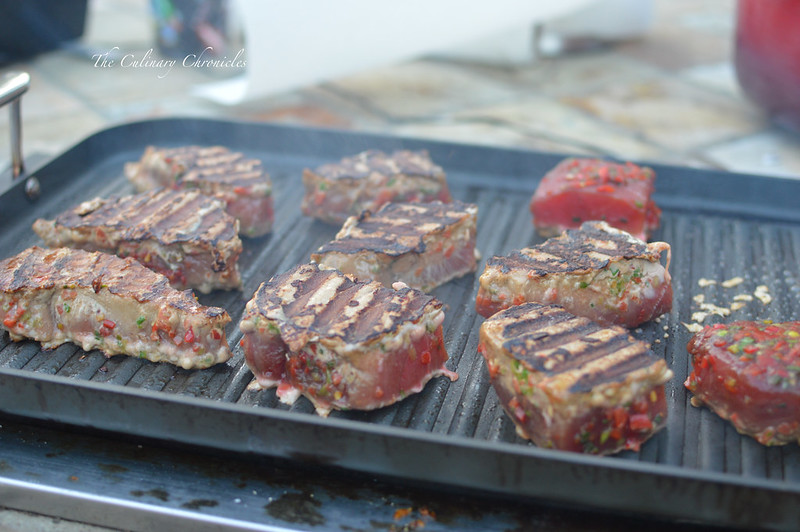 Our sides for the evening were hand cut, double-fried French Fries that were also fried up in the backyard and my Roasted Corn and Avocado Salad.

And I don’t mind saying that if you haven’t tried my Roasted Corn and Avocado Salad before, you really must add it to your list for summer grilling dishes. It really is a fantastic side for burgers, ribs, grilled chicken—practically everything!! 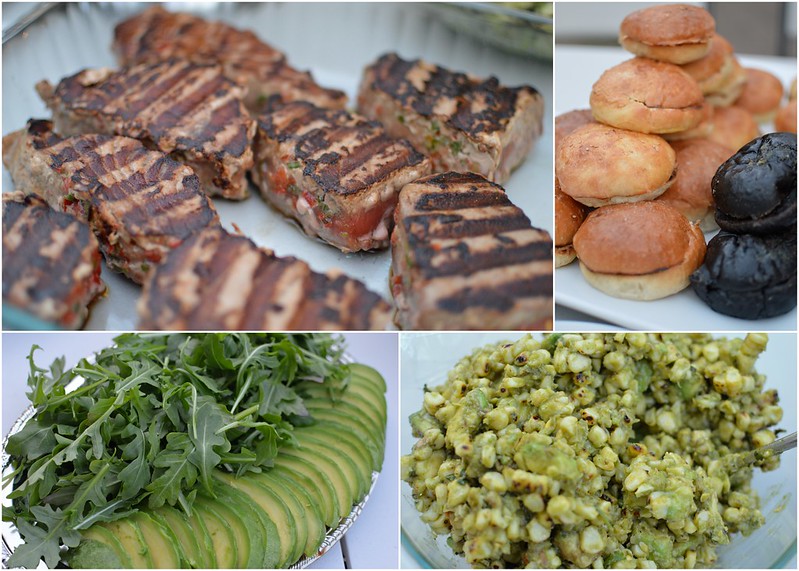 What’s Crack Sauce? It’s my niece, Stephanie’s, concoction that she uses as a base for her Spicy Tuna mixture. I really don’t know what it consists of other than mayo, tons of sriracha, sesame oil, tobiko and whatever else voodoo goodness she throws in it. And honestly, you can schmear it on or dip anything in it. 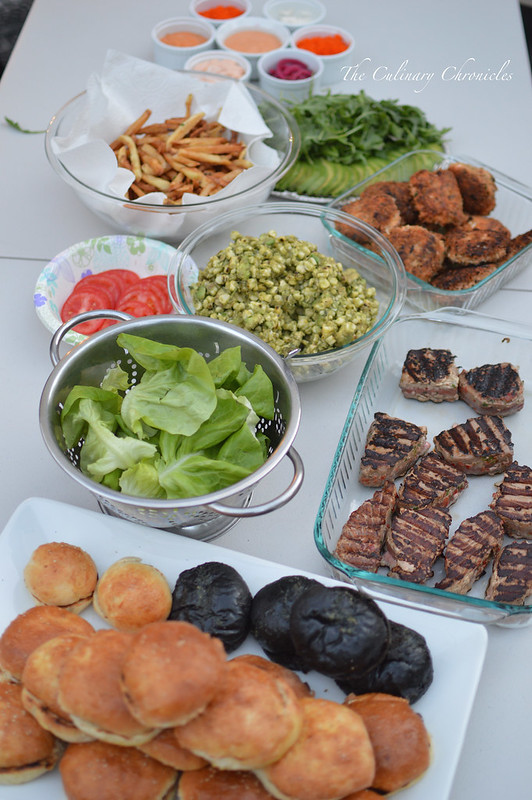 My family suffers from the MustTakePhotosOfFood Affliction.

Have you heard of it? 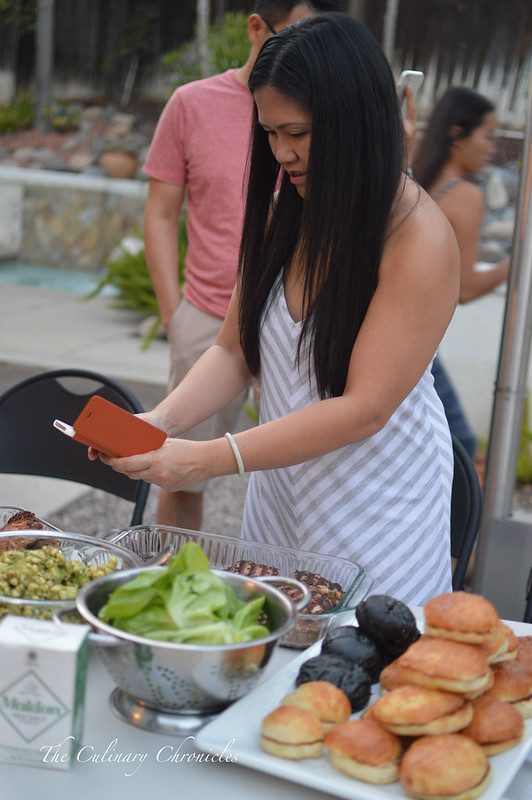 Here’s a head shot of the burgers… 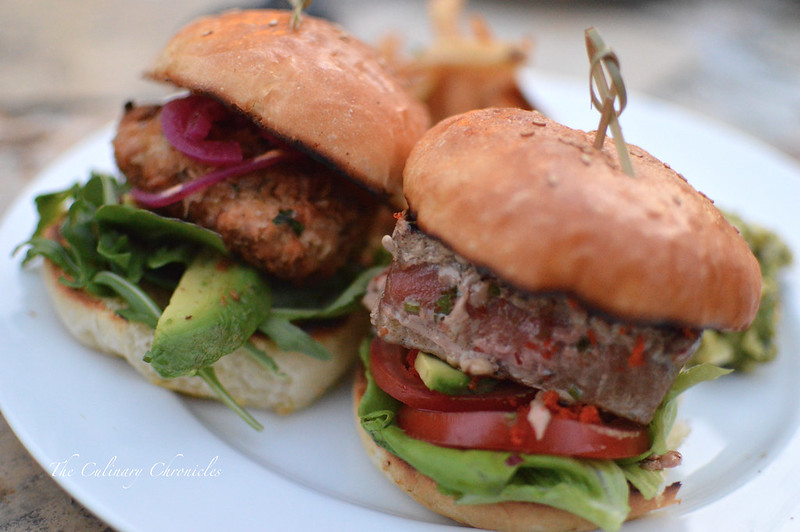 Of course I didn’t eat both of the burgers!

I went halvsies with my seester.

And finally, dessert. Because a Family Dinner without dessert is straight up blasphemy. Curtis is a huge matcha fan so we decided to try out Nami’s Green Tea Souffle from Just One Cookbook. If you haven’t checked out her site before, you really must as it’s one of my go-to references for Japanese recipes.

As for the soufflés? They were on point—light, fluffy, airy and paired well with a quick chocolate sauce we whipped up. But the only down side with soufflés is that unless you’re a crazy amazing photographer, it’s near impossible to get a good shot of them before they start to fall. You barely have 0.35109 seconds before the gorgeous, raised souffles begin to sink.

At which point, an angel sheds a tear.

The only time I’ve ever have taken a decent soufflé picture is with these Chocolate Souffles with Raspberry Sauce and I’m fairly convinced it was with sheer luck that it happened.

Nonetheless, the Soufflés were delish. 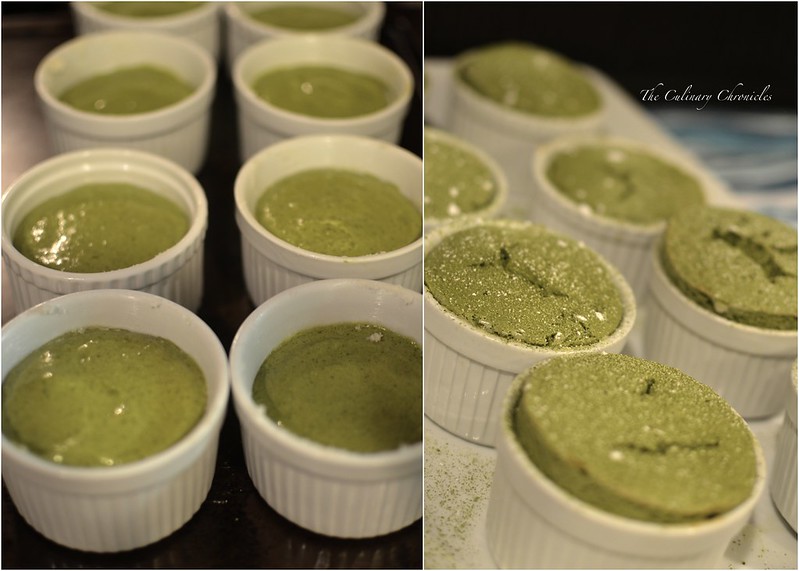 I should mention that at some point between dessert and clean up, we had a full blown 80s dance party-singing session in the kitchen.

We sounded amazing. Our moves were jaw-dropping. The kids were mortified. 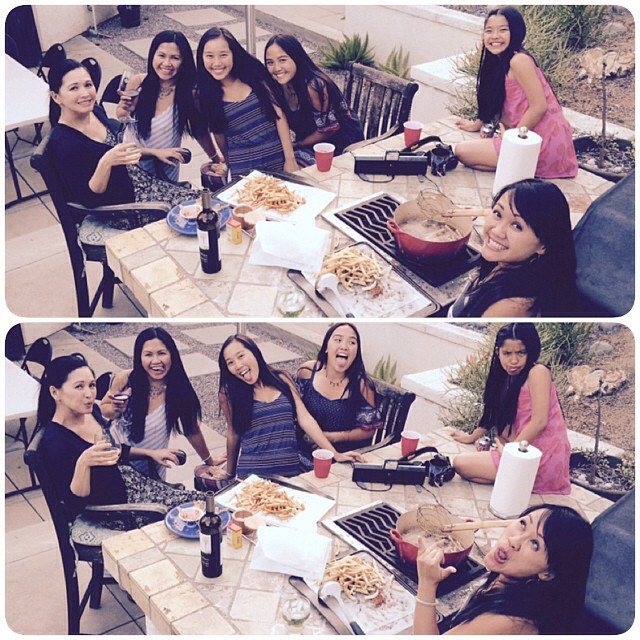 8 thoughts on “Rockin’ Seafood Burgers and Our Backyard Family Antics”