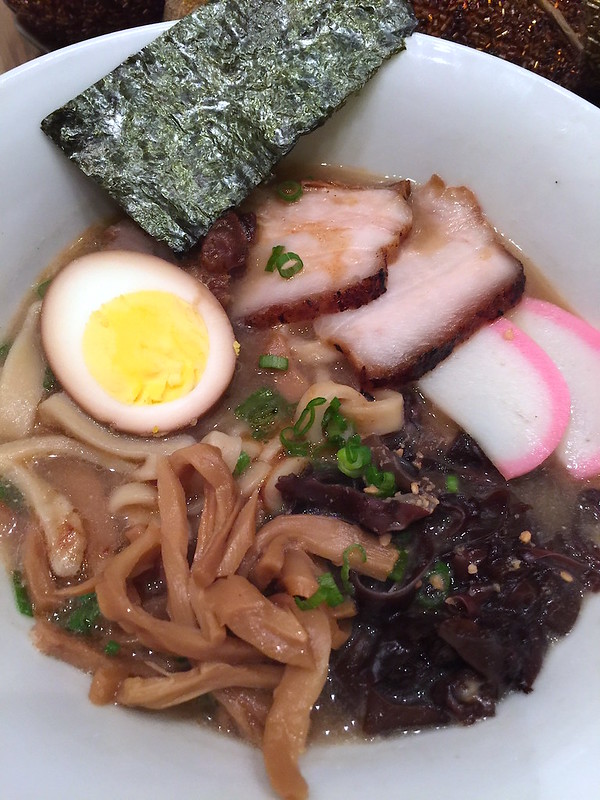 It’s been two weeks since Thanksgiving and I think I’ve finally recovered from the madness.

Just in time for 15 full days of holiday craziness with my family. 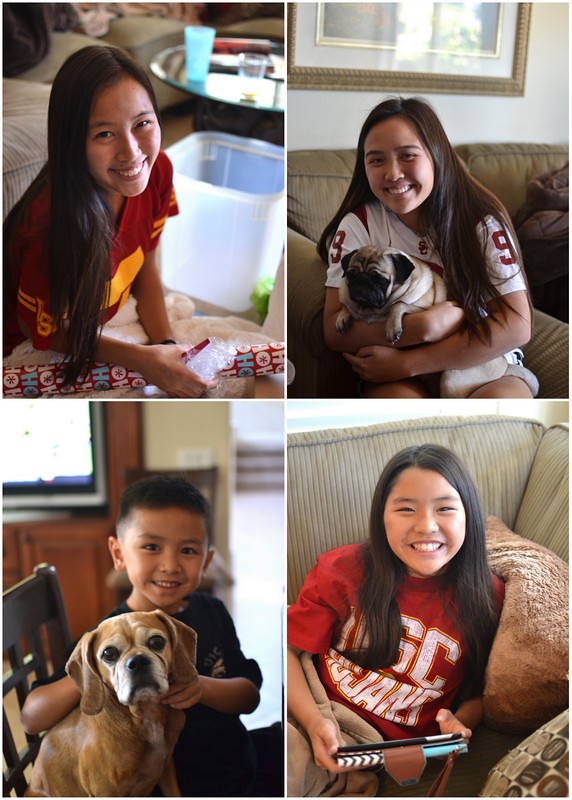 At the close of Thanksgiving and 15+ hours of shopping, we held our monthly Family Dinner. When we had chatted about potential menu options a few weeks prior, my seesters and I agreed that we wanted dishes that were low-key and stress-free since we would have been so wiped out from Thanksgiving.

So obviously, we chose a menu that took hours and hours of preparation, that needed to be started days in advance and was highly laborious.

Apparently our strategy was slightly flawed.

But as always, we started with some cocktails….. Pomegranate-Raspberry Saketinis!

I muddled a bunch of fresh raspberries with pomegranates in a pitcher. Added sake, a few glugs of vodka, several splashes of Cointreau, some fresh lime juice, pomegranate juice and then topped it off with a bit of pomegranate-berry soda. 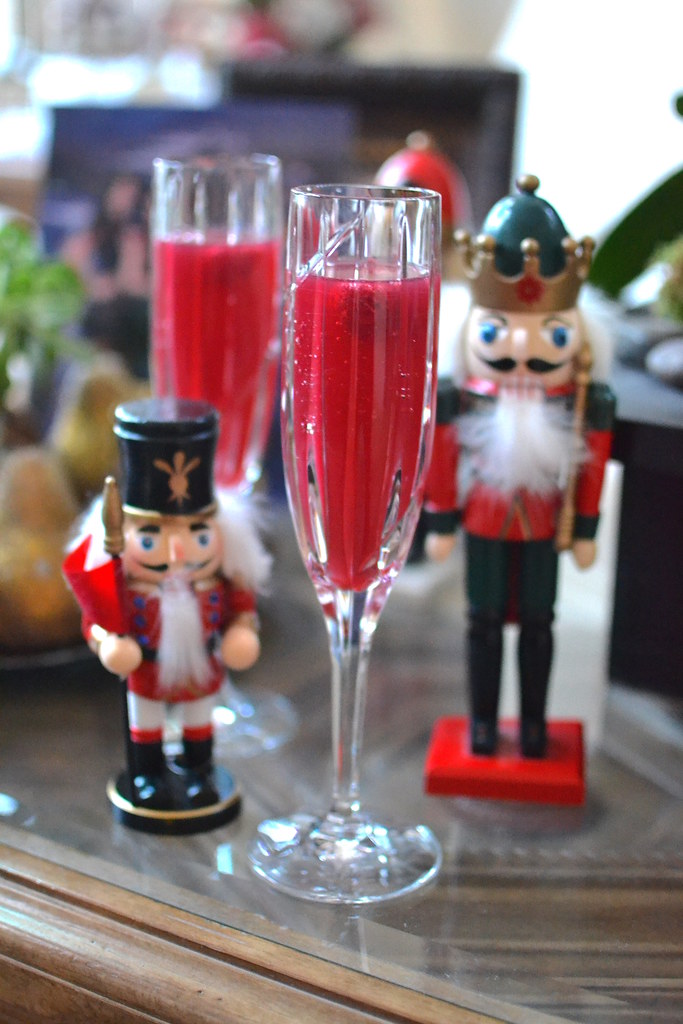 Then came the appetizers – Xiao Long Bao or “Shanghai Soup Dumplings”. Normally I would say that dumplings aren’t typically too difficult to make. In fact, I usually love making them and find the folding process rather relaxing.

Not these buggers! We’re all still traumatized! 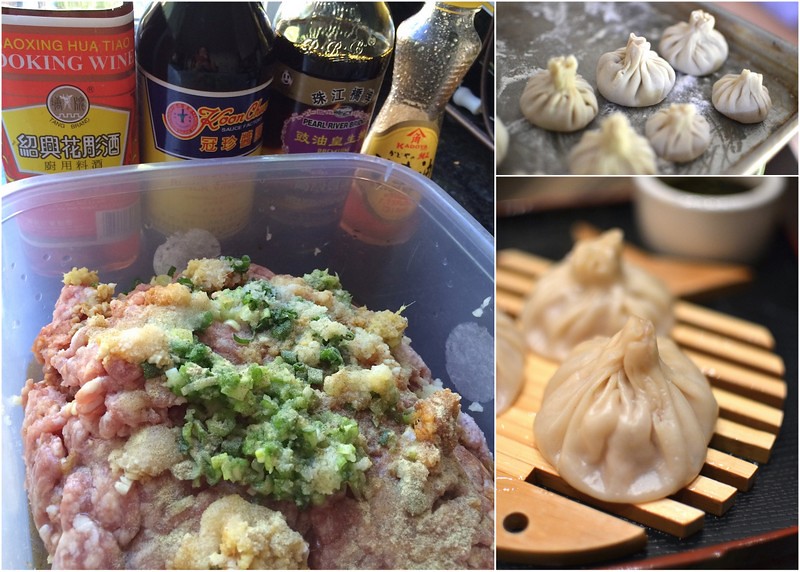 Xiao Long Bao are a Shanghainese dumpling with a very thin skin/wrapper. They’re filled with a variety of ground proteins and an aspic that once steamed, becomes soupy–thus the name Soup Dumplings! Dumplings and Soup all in one? BRILLIANT!

Seester T took the lead with these and man, did they take some prep work! Using The Woks of Life recipe, she started with the aspic. Vegans beware because essentially, it’s a natural meat gelatin.

Pork bones and other porky bits are thrown into a pot with water and several aromatics. Everything simmers for a few hours and then is strained and chilled. 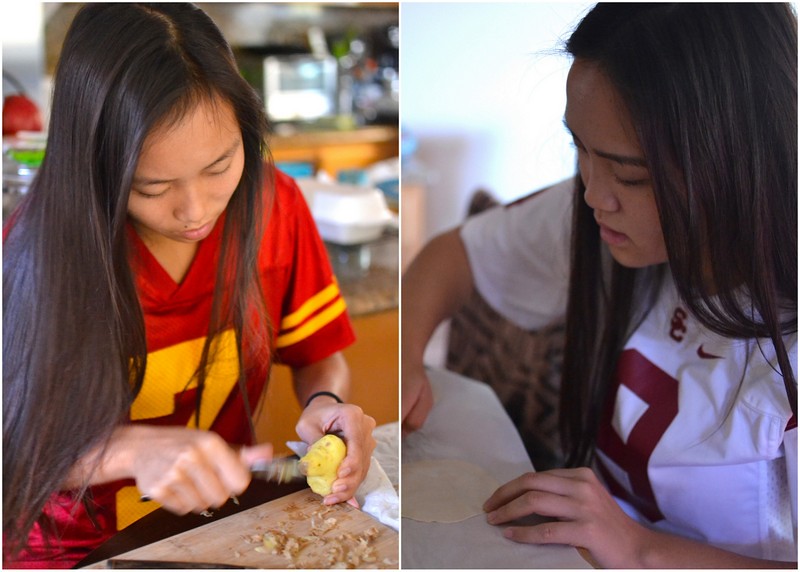 She then made a ground pork filling and threw in some shrimp because surf and turf is always a good idea. Once done, the aspic was cubed up and folded into the filling.

Next, we enlisted our niece Nini to help out with the assembly. Seestrah made the dough according to The Woks of Life’s recipe and used my pasta roller to make thin sheets for the dumpling wrappers.

Remember when I said laborious? It definitely was!

Hand cranking out the sheets so that they were paper thin and then cutting them into perfect circles with a biscuit cutter. Nini then meticulously filled and folded the dumplings to ensure they were all sealed up tightly so that none of the soup would run out during the steaming process. It took about 3 hours for us to make the wrappers and fill them all. Granted, it was our very first time but I will never, NEVER take it for granted next time I have Xiao Long Bao. Those folks can make them in lighting speed!

The XLB had good flavor and paired well with the black vinegar sauce–plus they were fun to eat! If we do ever make them again (and let’s be honest, it’ll be a very LONG time in the future), I’d like to play around with the dough. It was pretty good but I think it could be even thinner, especially on the top where it all purses together so that it’s less dense and chewy.

But heck–for our first time, it was awesome! 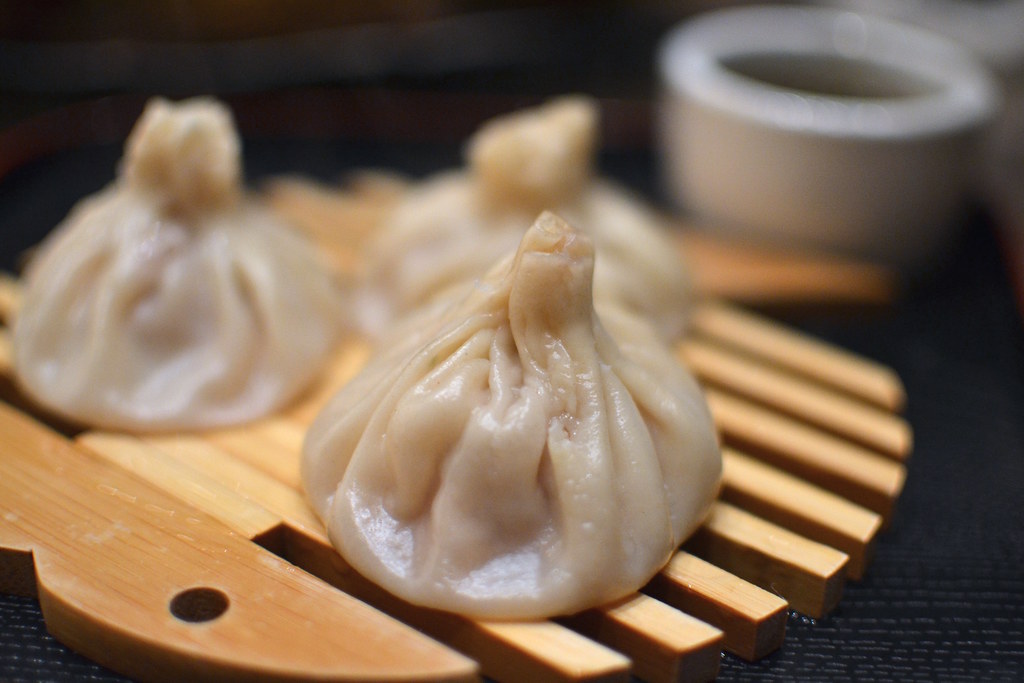 For the main dish, we chose Tonkotsu Ramen where we made everything but the menma and kamboko from scratch.  And if you’re keeping tally, that means the Tonkotsu Broth, Chasu, Ajitsuke Tamago, Mayu and Ramen Noodles—ALL HOMEMADE!

By chance do you recall when I said we wanted a low-fuss Family Dinner?

A few days prior to Fam Din, Seestrah N started on the Tonkotsu broth because it needs hours upon hours of simmering.  She went with Marc’s route from No Recipe and pretty much followed it to the T.

On the day of Fam Din, she made the Chasu –braised pork belly from Nami at Just One Cookbook. She also threw in an extra few pieces of pork shoulder for some added protein. And let me tell you….that chasu was beautiful, unctuous, pork heaven. 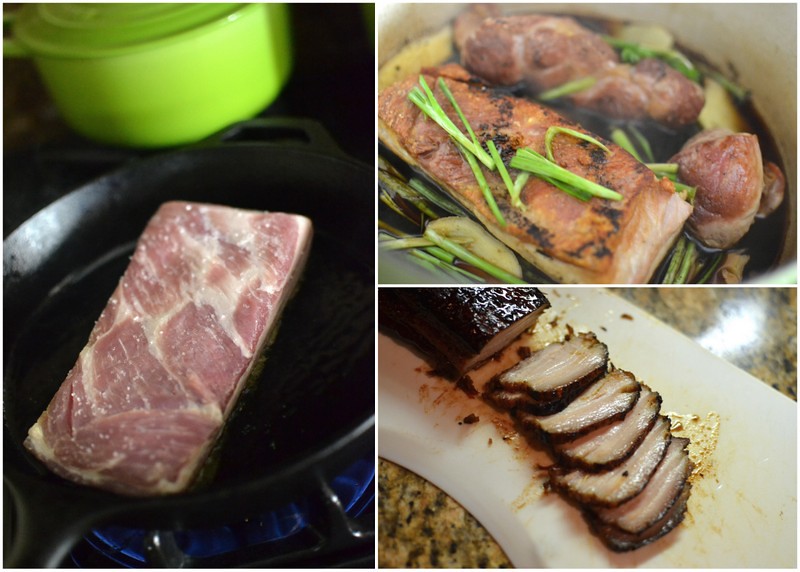 The night before Fam Din, I prepped Nami’s Ajitsuke Tamago (shoyu eggs) since it’s best to allow them to marinate overnight. They were really easy to make and would be great just atop some steamed rice. 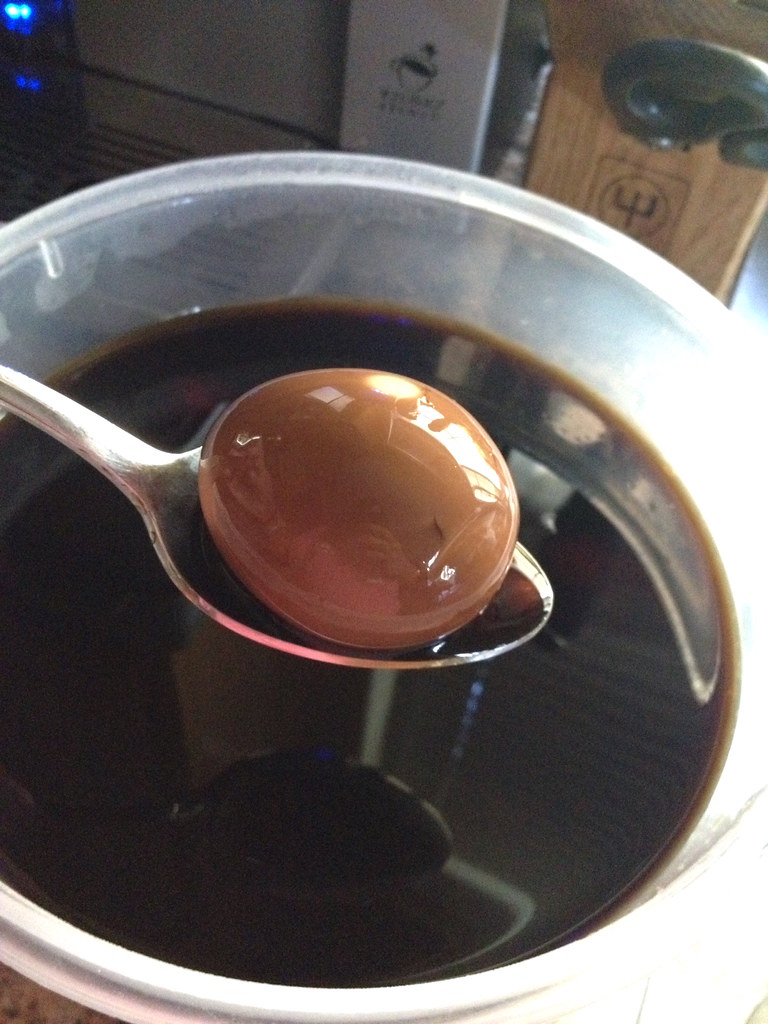 In addition to the Chasu and Ajitsuke Tamago, we topped our ramen bowls with:

I also made Mayu which is a black garlic oil that was drizzled on top of our bowls of ramen. 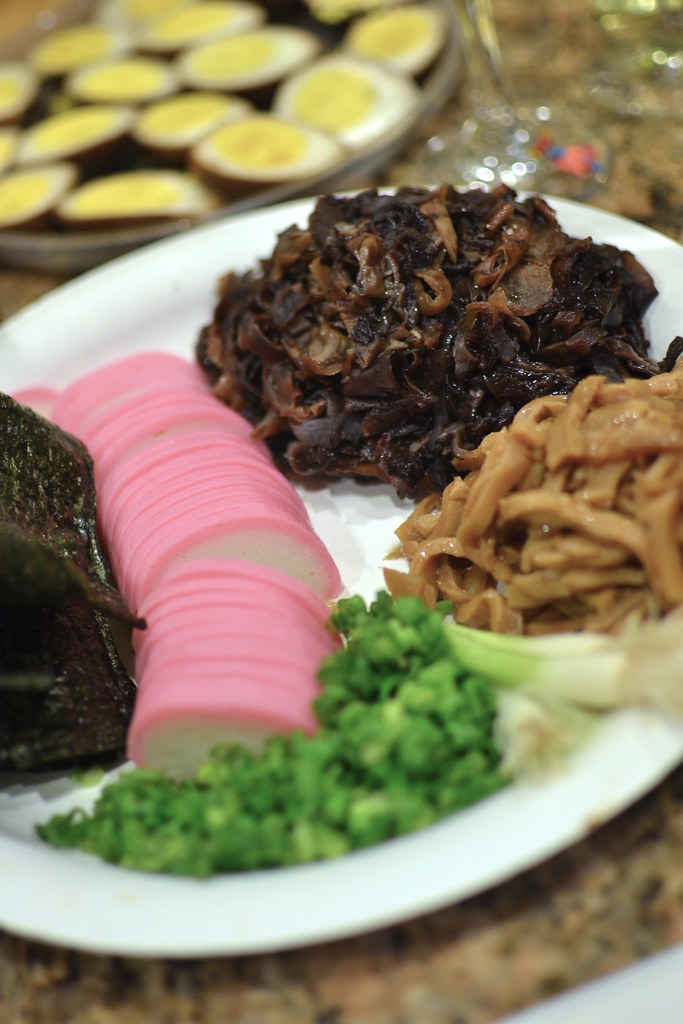 Now let’s talk a bit about my adventure with the homemade ramen noodles.

I spend a lot and I mean A LOT of time in the kitchen. As such, I’m pretty comfortable with baking breads, working with yeast dough and making pastas. I don’t have the pasta attachment for my KitchenAid but I’ve gotten by pretty well with my hand crank pasta roller over the years. So when I was nominated (was this because I’m the youngest!?) to make the noodles, I just went with it.

I did tons and tons of research and went with Marc’s ramen noodles as well. He was detailed in account and his pictures really captured the process. If you decide to give this recipe a try, note that he was not lying that this dough is extremely dry. You’ll likely want to keep adding water but just go with it and press it all together until it forms a ball. Trust me, it eventually does.

But here’s where I start to kick myself for attempting this method without an electric pasta machine/KitchenAid attachment. Before allowing the dough to rest for several hours, you have to run it through your pasta roller a few times so that it forms smooth rectangular sheets. Sounds easy right? Well I’m sure it would have been had I not used a hand crank roller with a dry dough. It was crumbling everywhere!

I was sweating bullets trying to shove the crumbling dough into the roller….Add the fact that I tripled the recipe and now you’ll have an idea why my biceps were on fire! 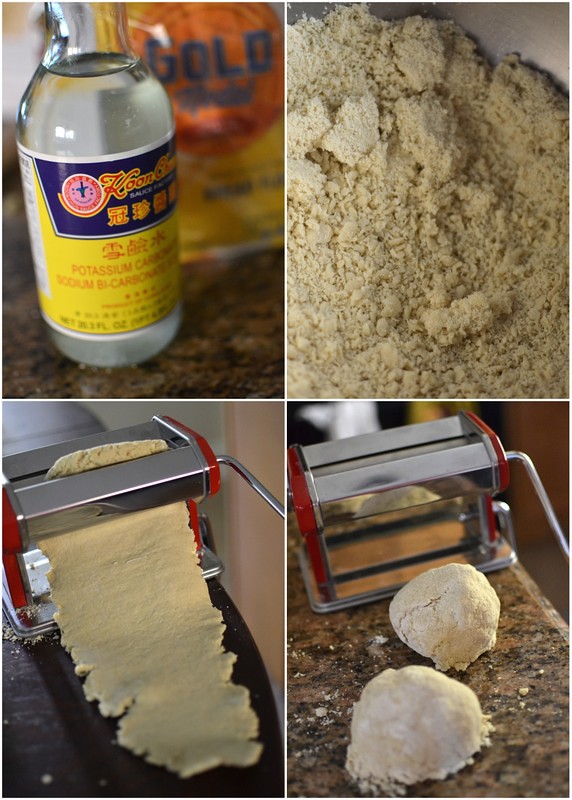 When it came time to cut them into noodles, a piece of me cried inside knowing that my arms were going to get another work out since I would need to pass the dough through the roller several more times. Another wrench was thrown into the situation when the attachment blade that cuts the noodles got stuck. I ended up hand-cutting the noodles which wasn’t ideal since I couldn’t get it as thin as I had wanted to—but it got the job done.

Moral of the story? If you’re not a pro, use a KitchenAid pasta attachment or similar thing-a-ma-bob if you make fresh ramen noodles. 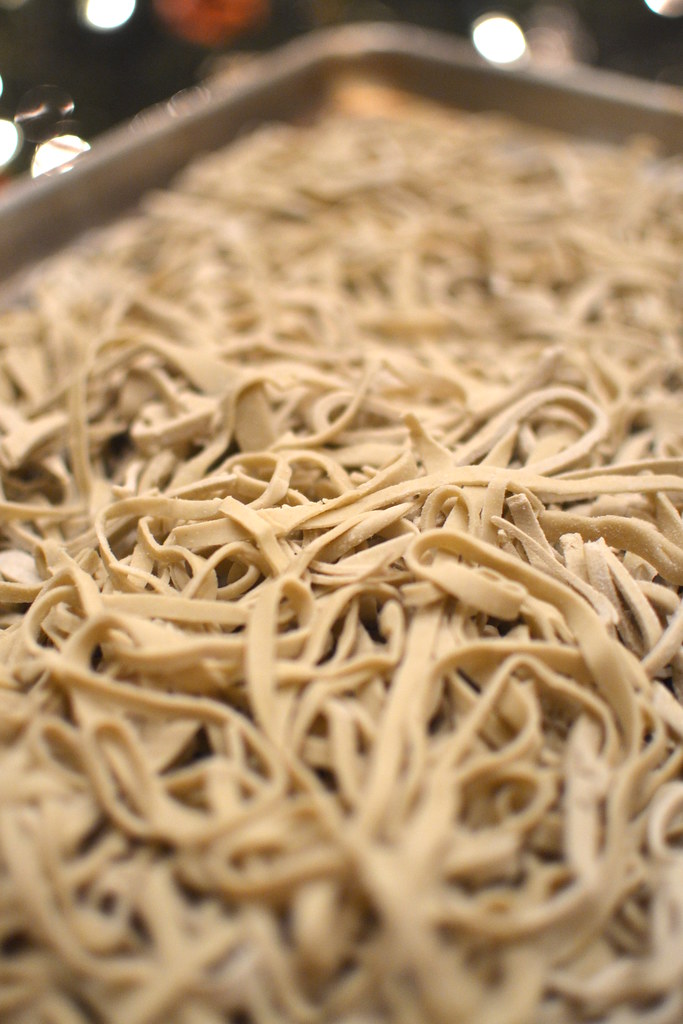 But once assembled, we were all pretty darn proud of ourselves.

Every component had a role and although laborious, had a distinct purpose to the ramen. 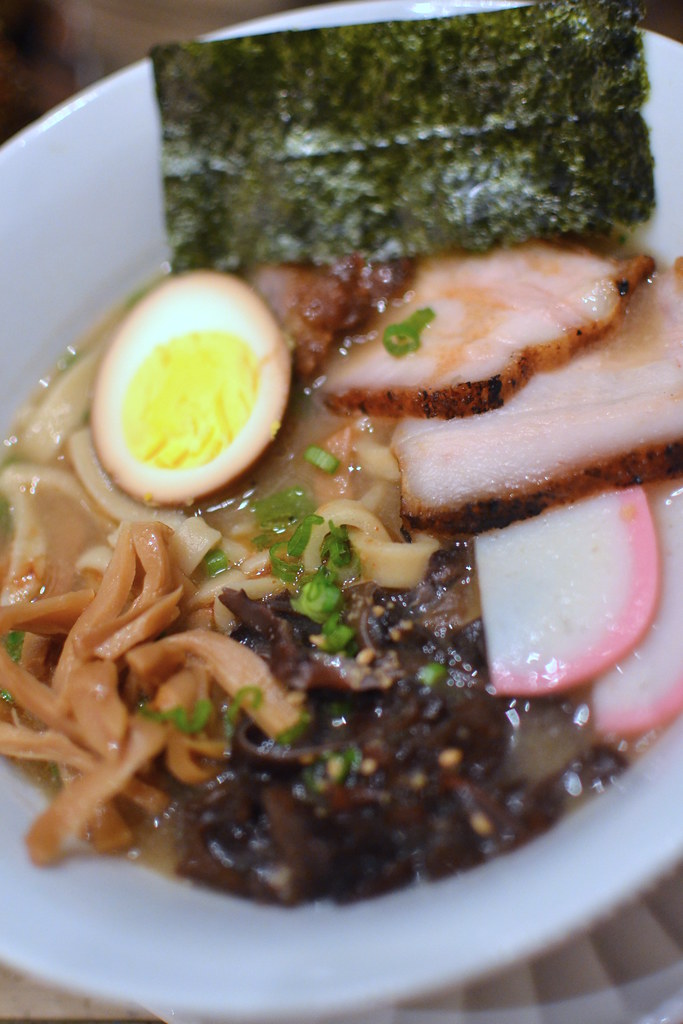 And just like the Xiao Long Bao, I will never, never underestimate or take for granted the folks who make my ramen.

Heck–they’re freaking amazing in my book. 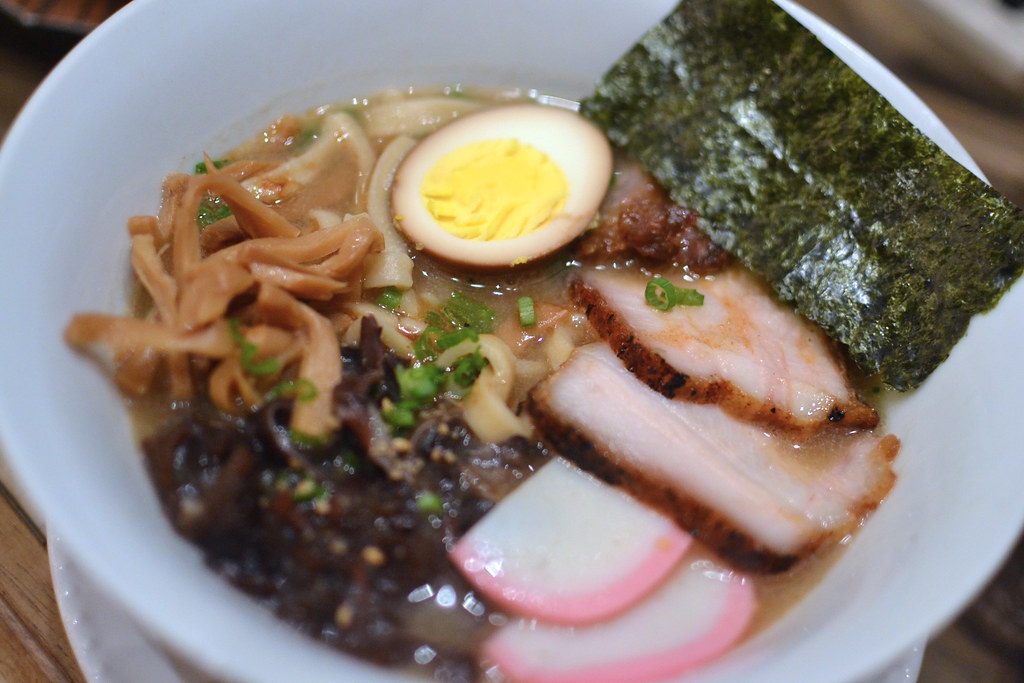 After polishing off our noodles and a bit of kitchen clean up, we actually took off for a little more shopping. Why? Who knows….we were delirious.

But when we came home, we tucked right into dessert.

I had made a simple Matcha Mousse-Chocolate Tart. The base was made out of crushed Oreo Cookies and filled with a fluffy matcha mousse. We’re green tea monsters, so a light and matcha-filled dessert suited us just fine. 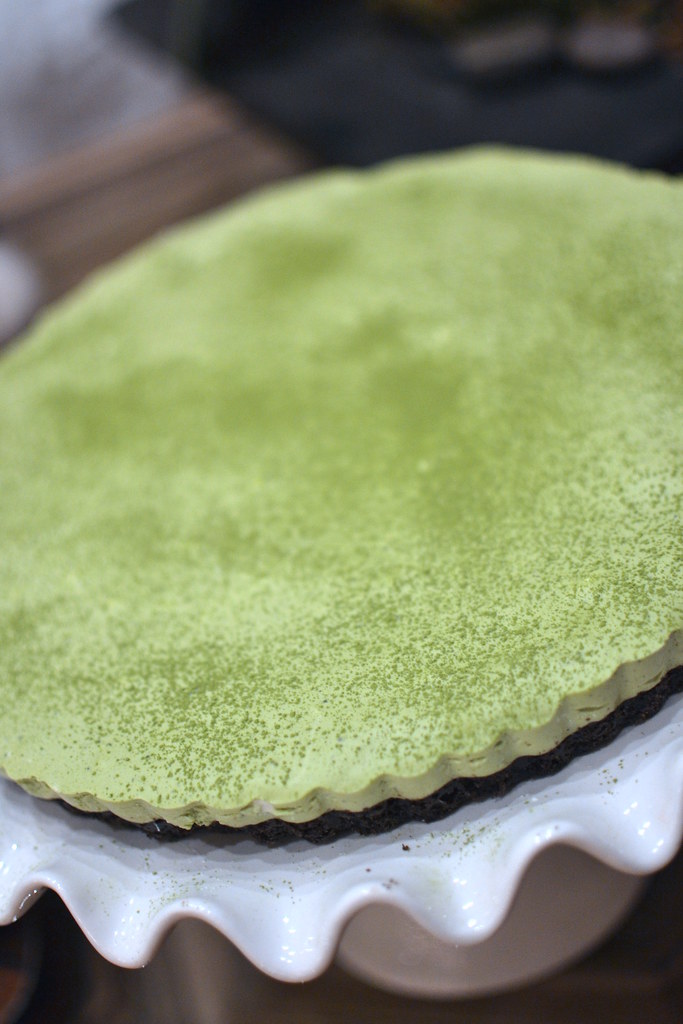 Was dinner easy and low maintenance?

Did I perhaps lose a few months off my life from the stress?

Did my sis say she needed therapy because of the XLB?

But were we happy with how things turned out over all?

It was a true and deep Labor of Love.

And the cherry on top?

My Trojans whooped the Bruins that day and brought back home the Victory Bell!! Aren’t my kiddos adorable in their gear???? ❤ 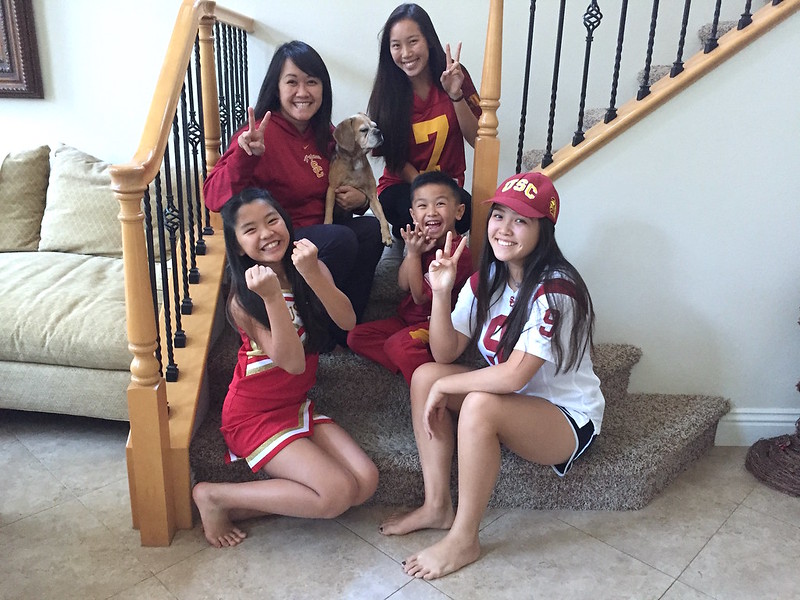 What did I pick up?

A few more additions to my ever growing Nutcracker collection. Priorities people, priorities. 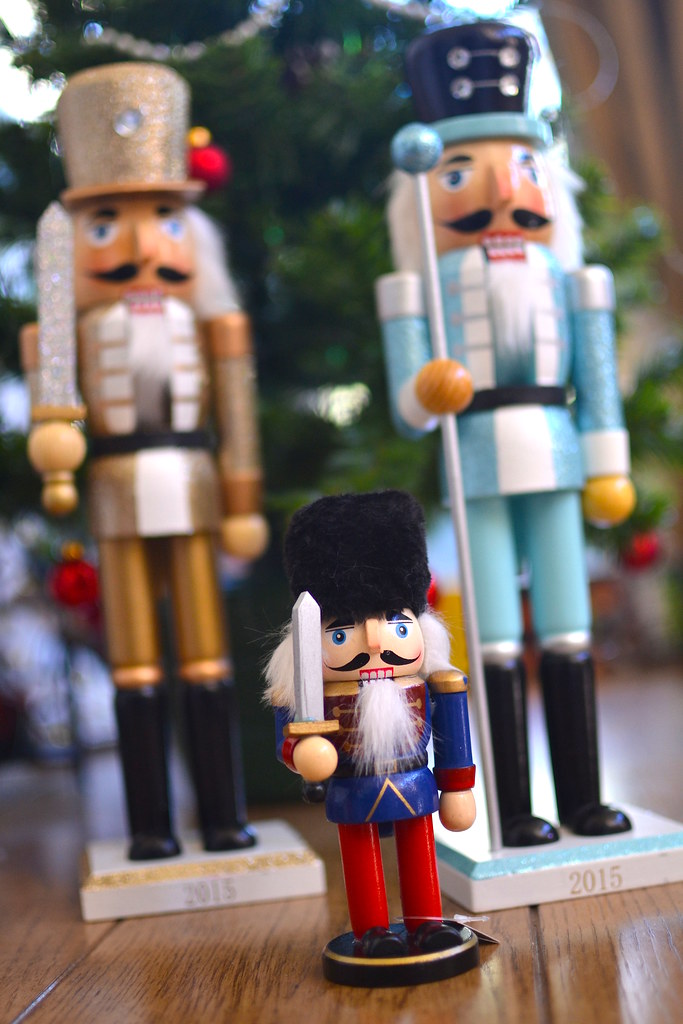