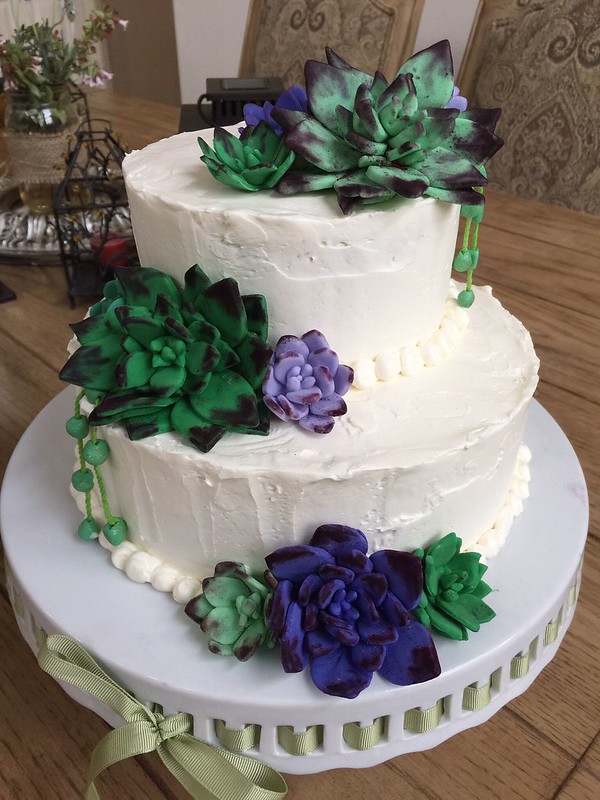 On Saturday we somehow managed to successfully throw my niece, Nini (aka Stephanie), a surprise Sweet 16 Birthday Party. It was quite a covert operation since the birthday gal lives in the house where the party was to be held and all of the decorations and prep items were hidden in various nooks and crannies.

But we pulled a fast one on her. 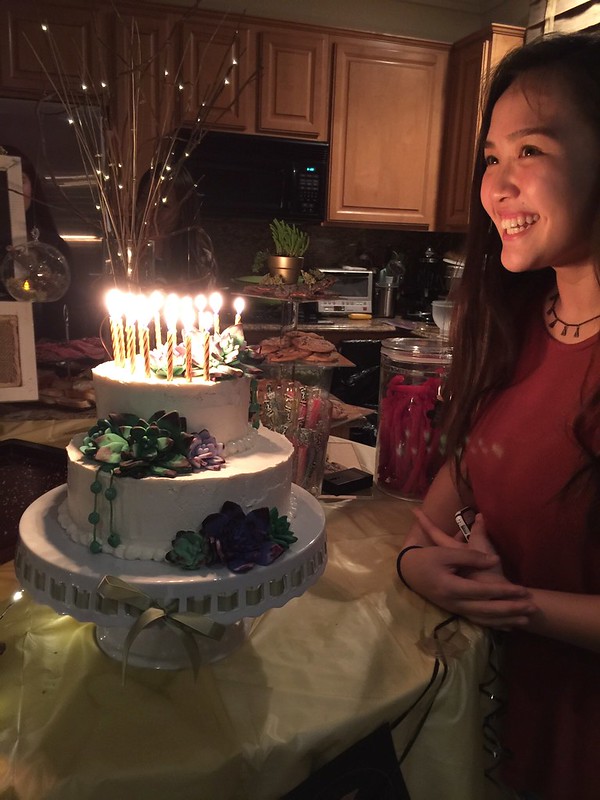 It all actually started with her big seester – my eldest niece, Nina. We had been brainstorming ideas for her upcoming birthday but nothing stuck. At one point when Nini was out of the room, Nina suggested that we throw her a surprise party with all of her favorite things. What a good big seester!

Her Near and Dear Friends…..

All things Gold and Copper….. 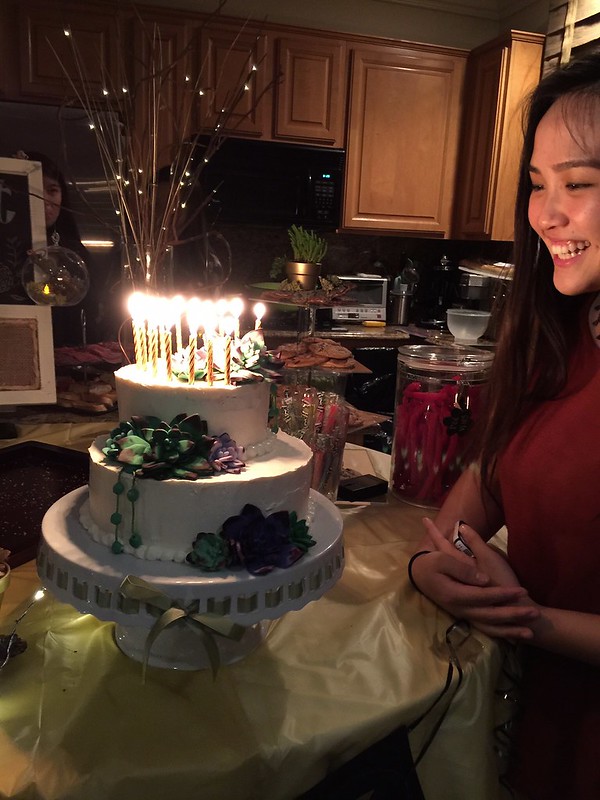 Come to think of it, I’m not sure if Nina had “family” on that list…but I’m going to say it was a given.

With a date and theme in mind, we were off to the races — full party planning mode.

Eldest seester gave the thumbs up to have the meal catered to give us a little breathing room. We brought in our local taco caterers who set a taco and nachos station in the backyard. The spread was full of pollo, carne asada, carnitas, bright yellow nacho cheese, guacamole, rice, beans and ALL of the fixings. 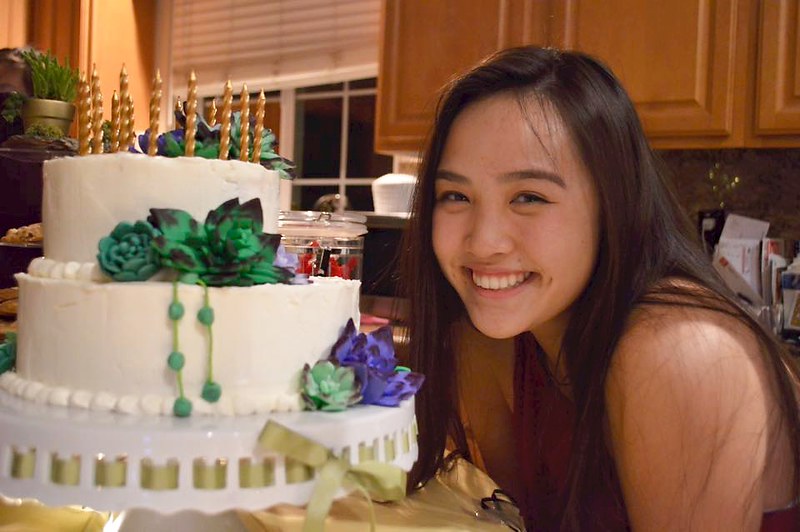 This freed up our time a bit to focus on a dessert bar….because let’s face it, apparently we can’t throw a party these days without one.

Capitalizing on her recent macaron lesson with me a few weeks ago, Nina made a bunch of Matcha Macarons filled with Chocolate Ganache. Nini loves green tea and loves chocolate–and we all love macs so it was a no-brainer.

Eldest seestrah baked up several batches of New York Times Chocolate Chip Cookies –another one of the birthday gal’s favorites. 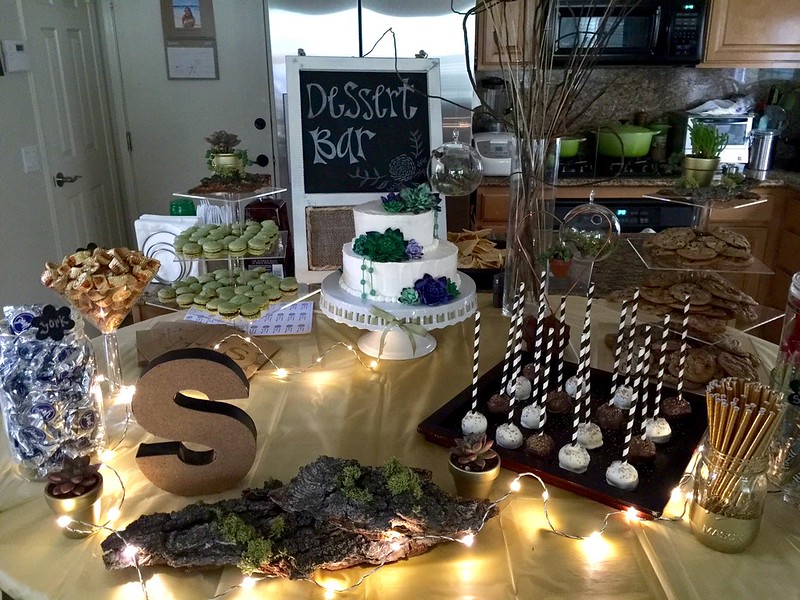 As for me, I was tasked with the birthday cake (more on that later) and even whipped up a couple dozen cake pops at the last minute. 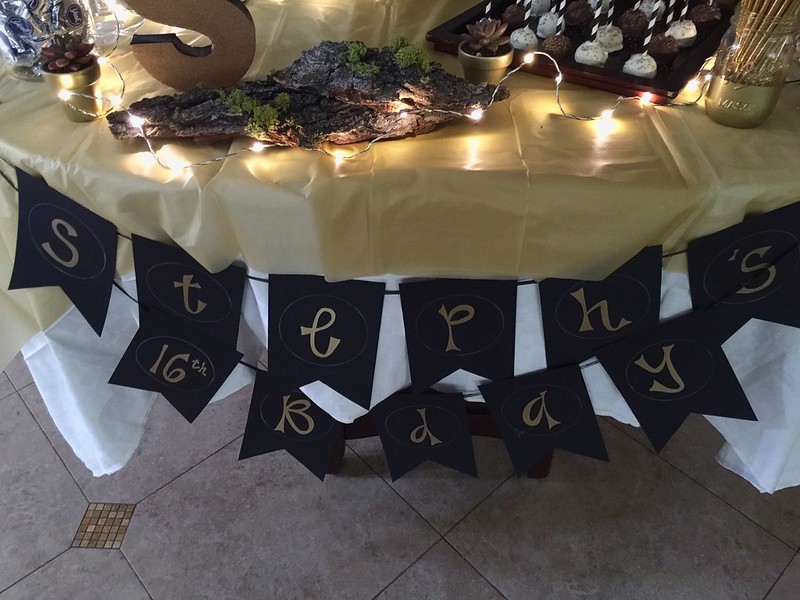 And before we knew it, it was time for the birthday girl to come home to her party. I think you can tell from the look on her face below that she was truly surprised! Success!

The night was filled with lots of food, laughter, a few games, LOTS of sweets, presents and endless–and I’m talking ENDLESS selfies!

We even set up a photo “booth” that was well taken advantage of by the dozens and dozens of teenagers. But get this—they would still take selfies while they were having their pictures taken! I kept asking if they wanted me to take the photos for them but they politely declined. Perhaps normal poses just aren’t cool…. I may never understand it. 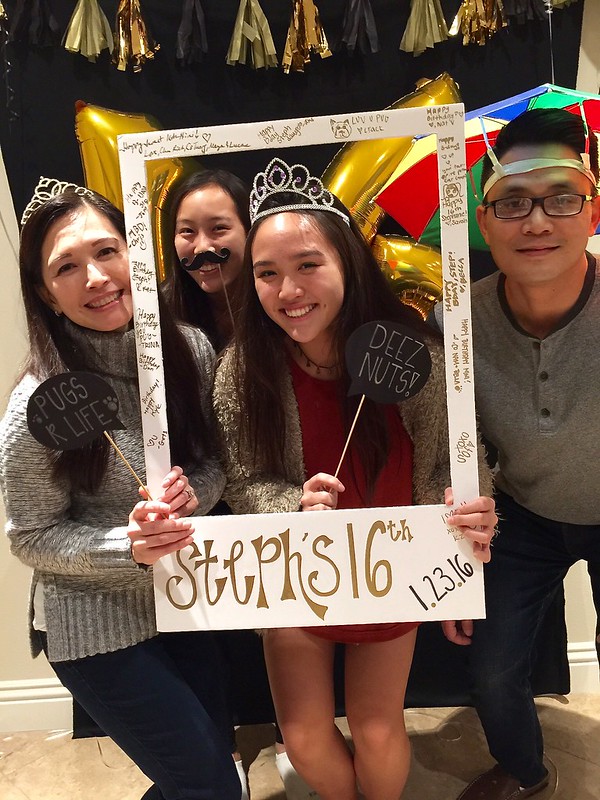 Let’s talk a bit about the cake.

For years, Nini has been obsessed with succulents —she’s absolutely nuts about them!  So when it came time to talk about cakes, the design choice was already made.

Which meant it was time to bust out the fondant. When I mold fondant decorations, I like to start at least a week out before the event to allow ample time for them to air-dry and harden a bit. This helps to keep the figures’ shapes as well as sets the color of the dye.

Below are a few of my previous fondant works: 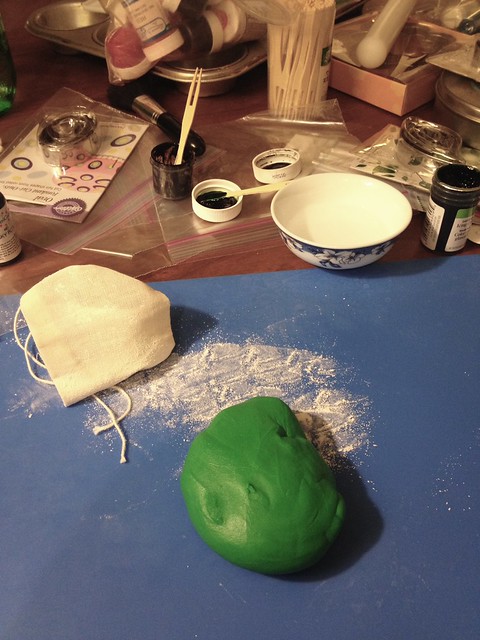 I’ve always kind of enjoyed playing with fondant—it’s essentially Play-Doh! I just wished it tasted better than it does but at least it’s fun to mold. 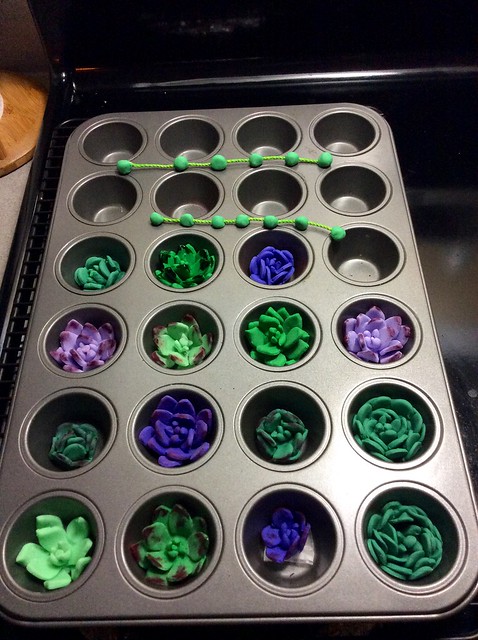 My succulents were not 100% botanically correct, but I think they ended up pretty cute. In addition to coloring the actual fondant, I used powdered food color to paint the tips and edges of some of the leaves for some added depth. 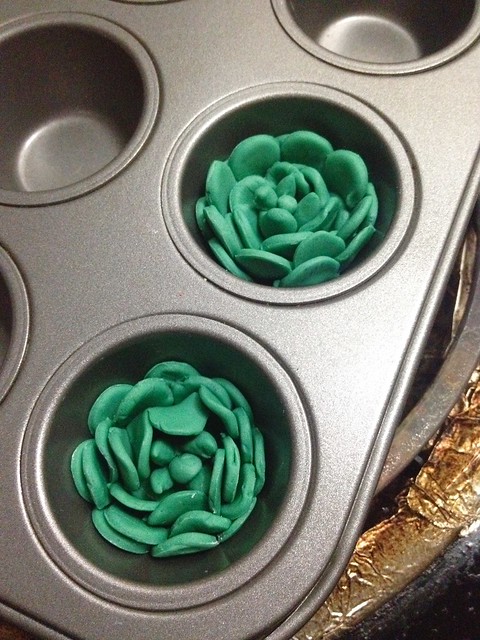 As for the cake itself, or “sponge”, I opted for a dense chocolate cake. For stacked cakes, I’ve always had issues with sponges that were too light (chiffon cakes, etc.) or if they were too moist. I find that they just don’t have the structure to hold up to the stacking weight which leads to a giant hot mess.

After the cakes were baked and cooled (I do this the night before I decorate the cake), it became time to level and tort them. And to be honest, this is my least favorite part. It’s tedious and time consuming but if you don’t do it properly, your cakes will be lopsided. Grab a handy leveler to help your cause out.

To fill and frost the cakes, I opted for the tried and true Swiss Meringue Buttercream. Not only is it delicious but it’s a good stable frosting. The layers were filled with a coffee flavored buttercream and the exterior of the cakes were frosted with vanilla buttercream to keep the color white. 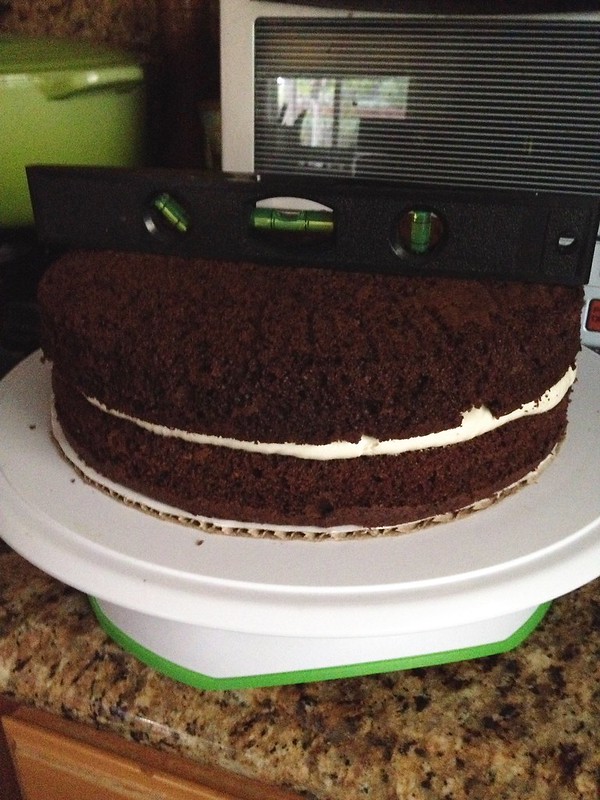 And if all goes well, all of your hard work and patience while torting will yield beautiful clean layers and lines in the cake. 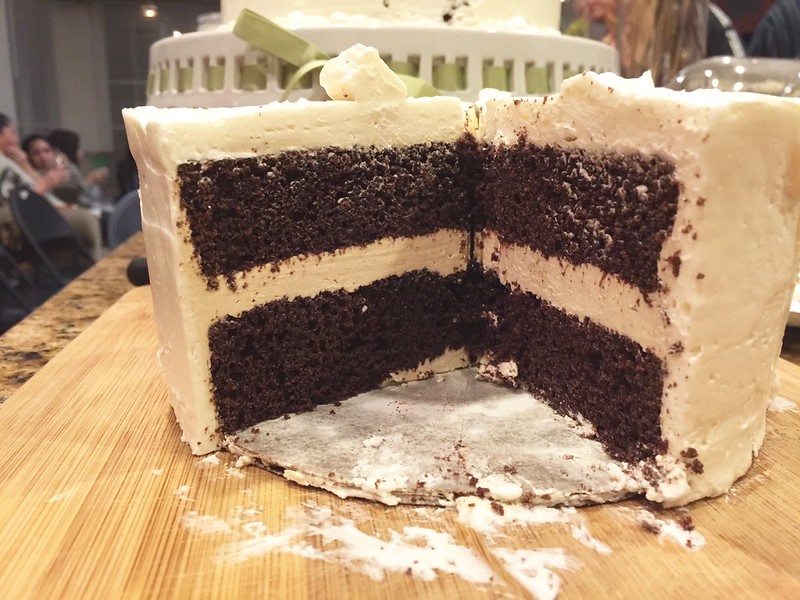 Once each cake layer was frosted and smoothed out, I placed the top tier slightly off centered for a bit of whimsy. I then took a Wilton 2A round tip to pipe an quick pearl pattern at the base of each tier. 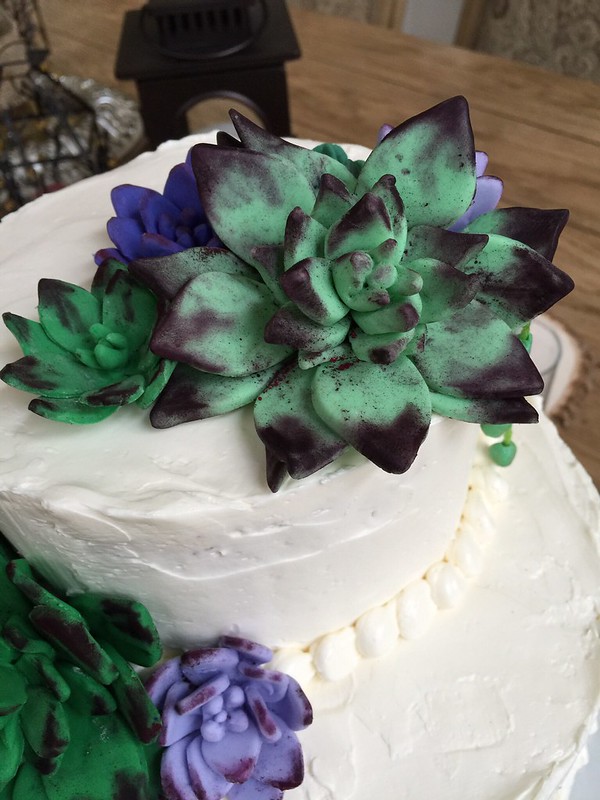 Next, as my seester said, came the fun part – figuring out the placement of the succulents. This is where I wanted to go a bit nuts and throw them all on. But my inner voice and my eldest seester talked me out of it. 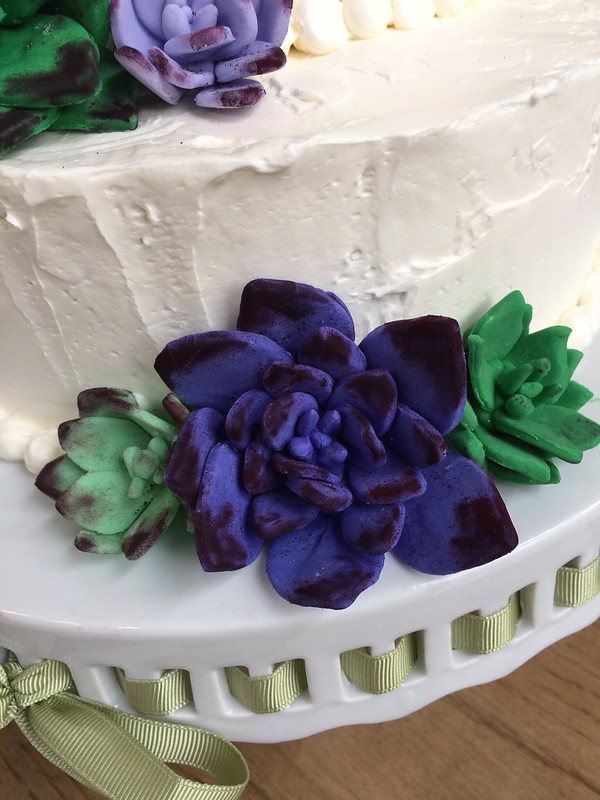 All in all, I was quite pleased with the final look of the cake and Nini really loved it –which if that doesn’t earn me the auntie of the year award, I don’t know what will…… 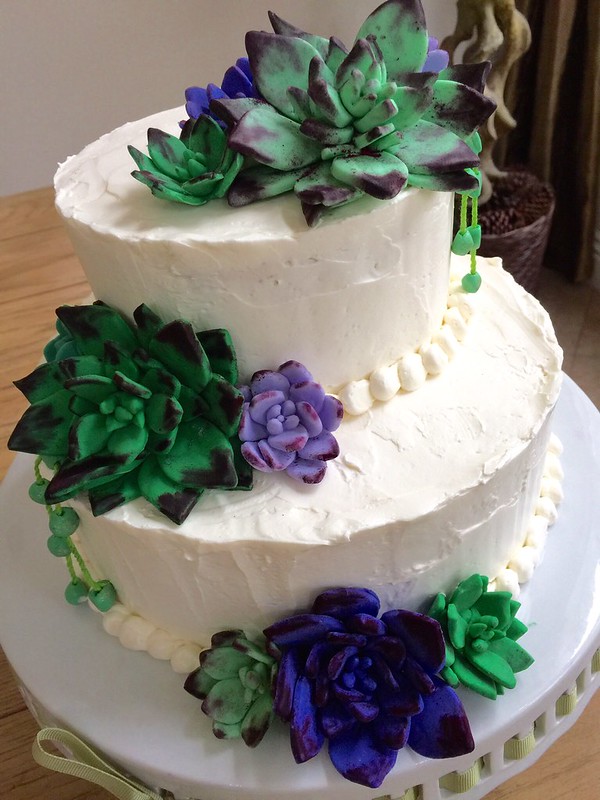 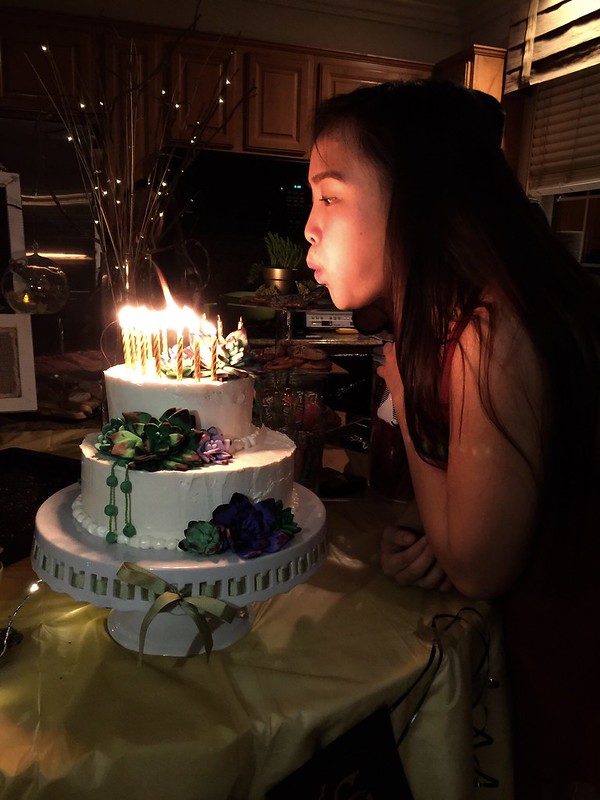