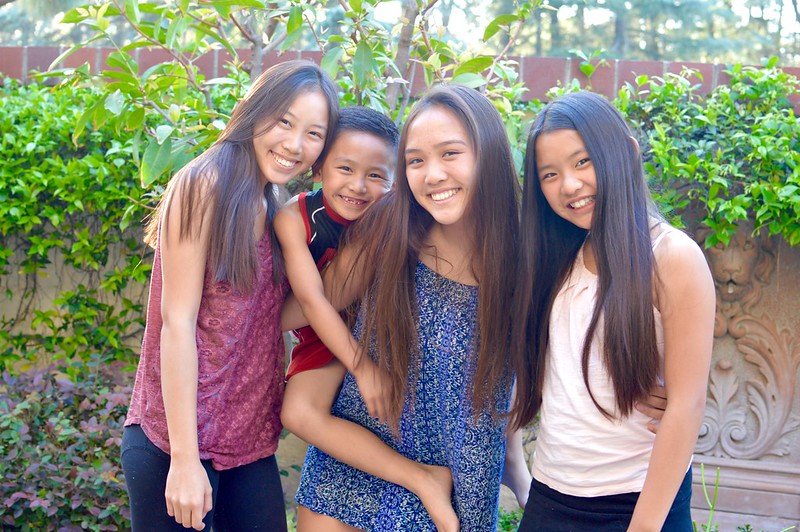 I need a vacay in the worst kind of way. Somewhere tropical where I can lounge on soft sand while getting my share of vitamin D from the warm sun, while listening to the sounds of water lapping on the shore.

Yeah, yeah…I live in coastal San Diego where I can pretty much get that 80% of the year but a gal needs options! So with no foreseeable break in my near future, I bamboozled my sibbies into our latest theme for Family Dinner in hopes that our dishes could transport me to a fabulous destination– the West Indies!

Jamaica, Trinidad & Tobago, Haiti, Barbados, and more……they were calling to me! 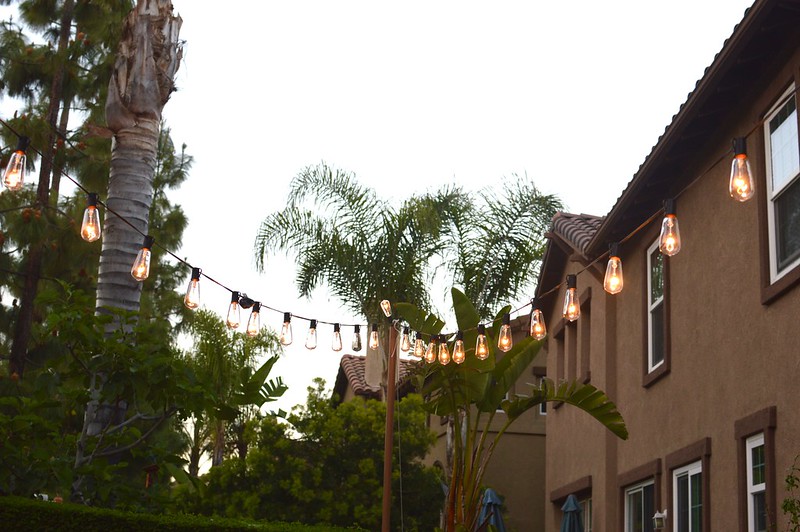 So we converged upon our seester’s house and got to cooking –all while I pretended that the palm trees and bistro lights in her backyard were not in Tustin but actually somewhere in the Bahamas.

And of course I had to snap some pics of the kiddos to balance all of the food shots.

I mean, look at Lucasaurus‘ face….that kid just kills me. 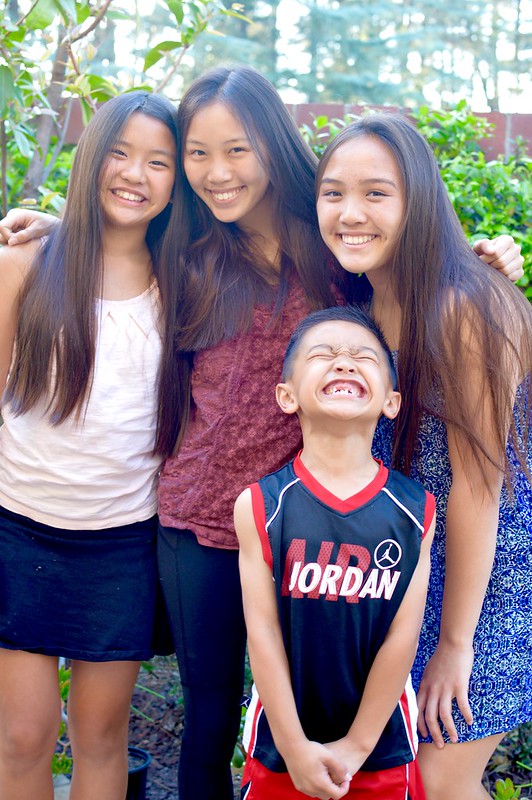 I don’t have a clue what’s going on here but if I had to take a gander, they were practicing to become back up dancers for JT or even the Bad Boy Family Reunion concert!!!

An auntie could only dream….. 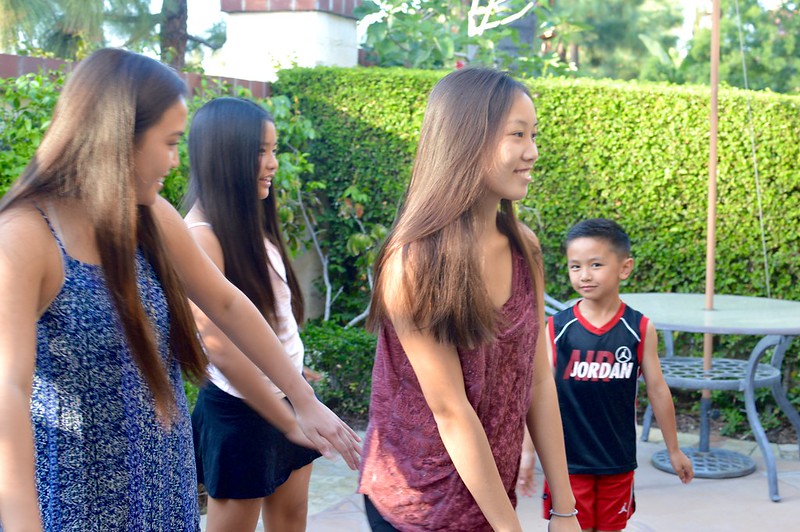 And doesn’t it look like our fur babies could use a vacation too?

Who am I kidding–those two live THE LIFE! 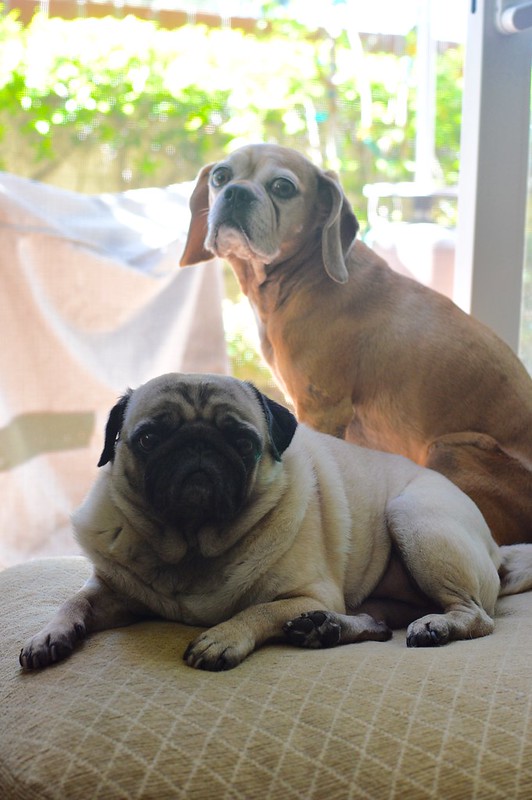 As for our cocktails, there’s no way we could hop to the Caribbean without a Dark’n Stormy! Okay, maybe more like a few of them…. 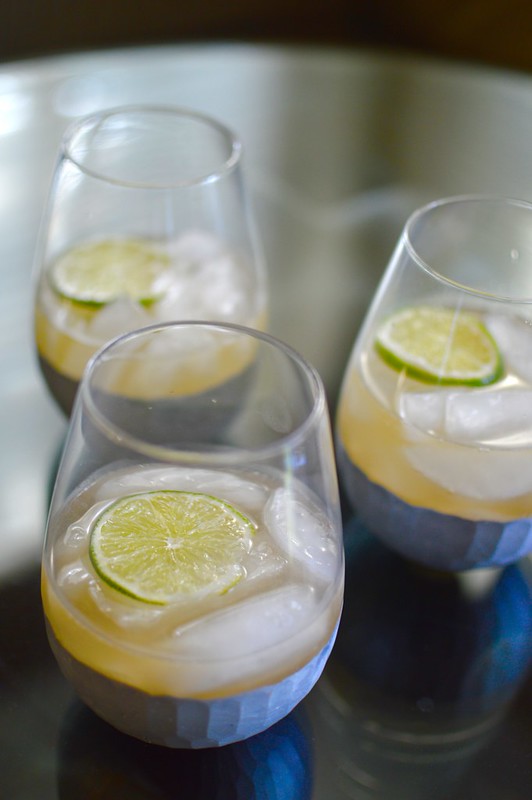 Since we were in the West Indies, much of our time was consumed with chopping lots of aromatics, herbs, chilies, and toasting spices. Unfortunately I couldn’t wrestle up any scotch bonnet peppers like most of the recipes called for and opted for habaneros instead. Both have similar heat ranges on the Scoville scale so it was a fair substitute and in the end were SPICY, SPICY, SPICY! 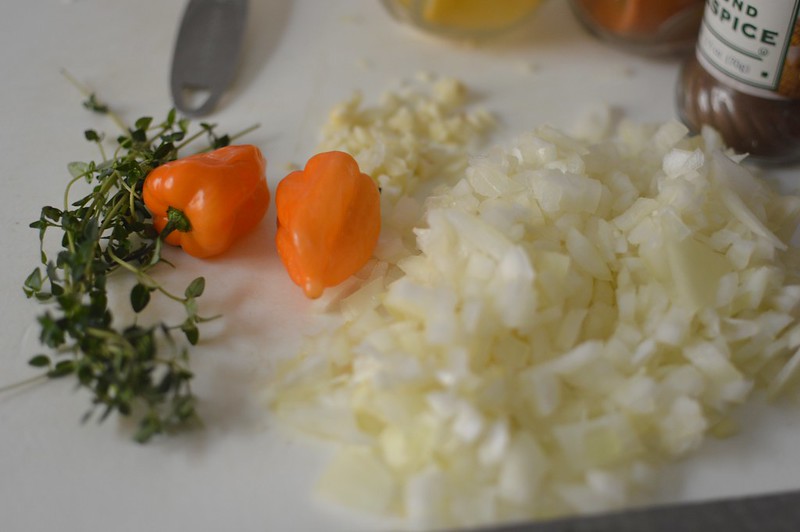 We ended up fixing two appetizers to nosh on before dinner. First up were my seestrah’s Conch Fritters. 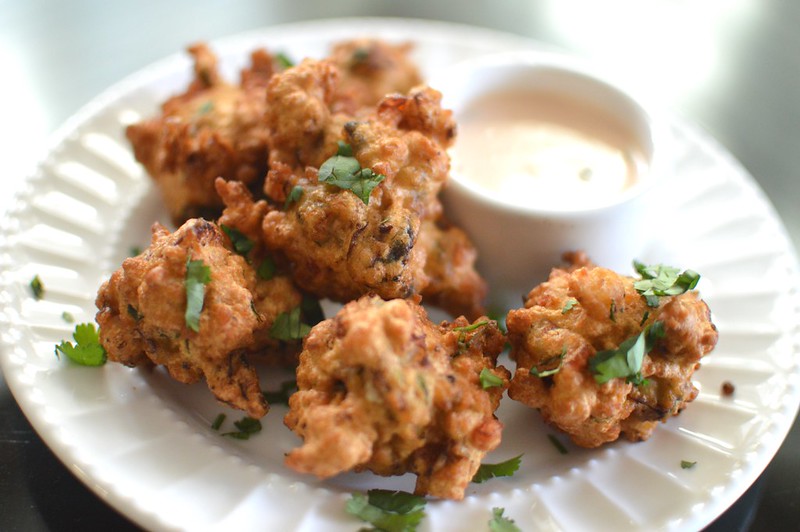 Conch is said to be the ultimate Bahamian food and its many iterations are the country’s national dish. You’ll find it in salads, grilled or as a fritter. Fresh conch was difficult for us to get so we ended up resorting to grabbing some frozen ones.

After they were defrosted, seester took a mallet and beat the heck out of them to tenderize the flesh a bit. Conch, after all, is a big ol’ sea snail and can be rather chewy. And if you’re grossed out by sea snails, just forget I called them snails and pretend I said squid or clams. 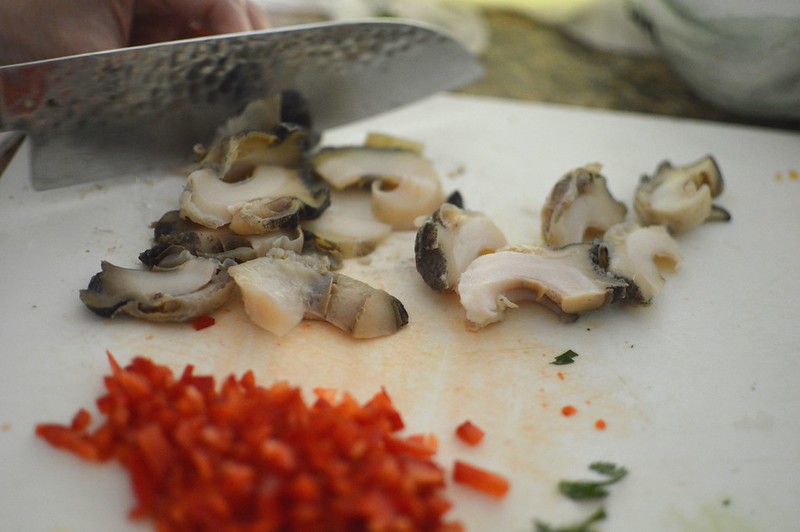 The recipe she used didn’t call for any baking soda or powder but were surprisingly light and fluffy after they were fried up—probably from the egg? She also added chopped red bell peppers for some additional flavor and crunch and served them up with a spicy mayo sauce.

I could have eaten a dozen of them! Um…well, I ate 1/2 a dozen of them but they were barely the size of a ping pong ball! Regardless, they are a keeper!

For our second appetizer, I made a batch of Curried Jamaican Beef Patties. 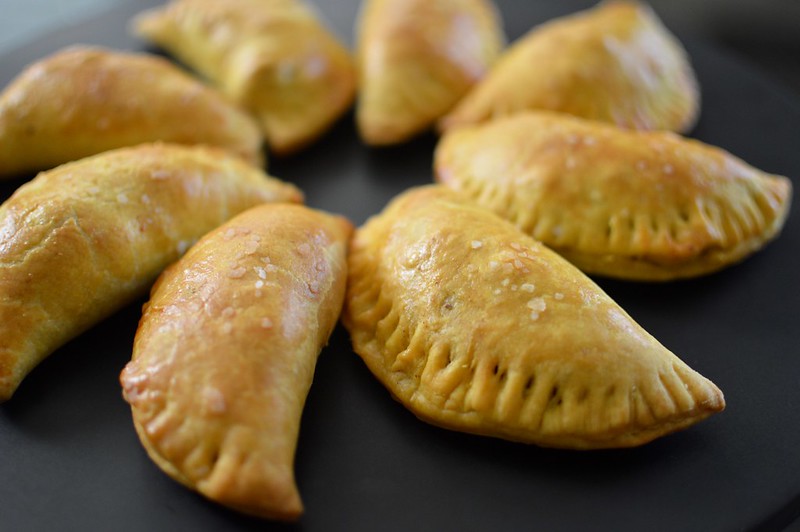 I’ve often said that many of the world’s cultures have some form of the a “meat pie” and the Jamaicans are no exception!

This version starts off with a flaky pastry dough filled with butter and flavored with curry powder. I added some turmeric for extra color as well. Despite the instructions on the recipe, you’ll want to pulse the dried ingredients with the cold butter a bit before adding the liquid ingredients in. 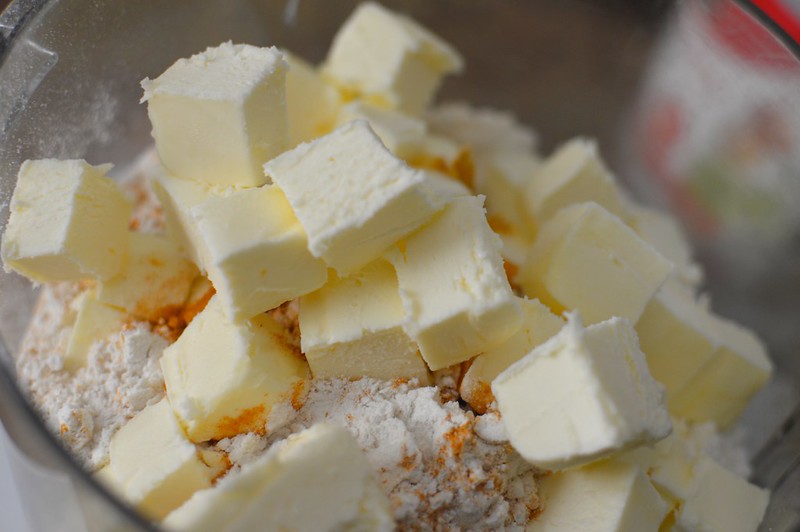 Next up came the incredibly savory beef filling. Definitely follow the ingredients to get the wonderful layers of flavor—and the beef broth and Worcestershire sauce is a must!

After the dough had chilled and rested and the filling cooled, we began assembly. The recipe said it made six 6-inch patties but that was way off for us. After rolling out the dough into 1/8 inch, we used a 5 inch biscuit cutter to form circles. This yielded about 22-24 perfect patties for us.

Oh–and after a quick egg wash, we sprinkled the tops with some sea salt flakes. 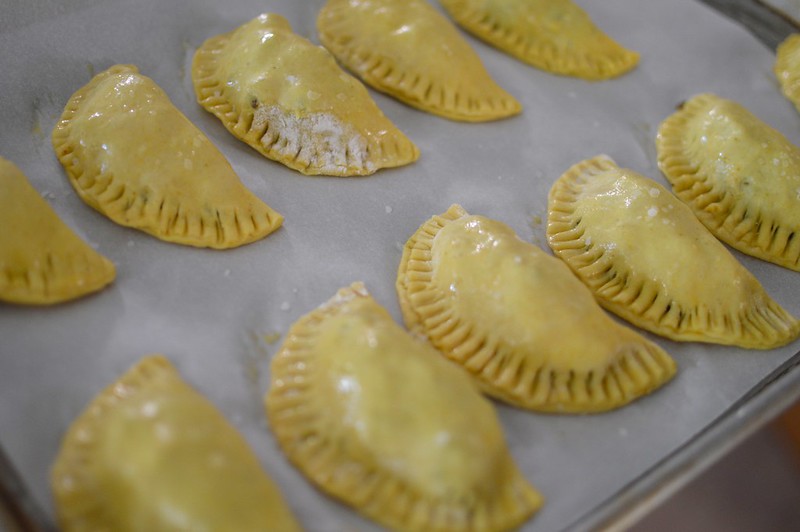 After they baked, not only was the dough wonderfully flaky and buttery but it had an awesome spiced flavor to it. As for the filling, it was delish. I would DEFINITELY make these again–and in fact, I’d double the batch and freeze them so that I could bake them off any time I had a hankering. 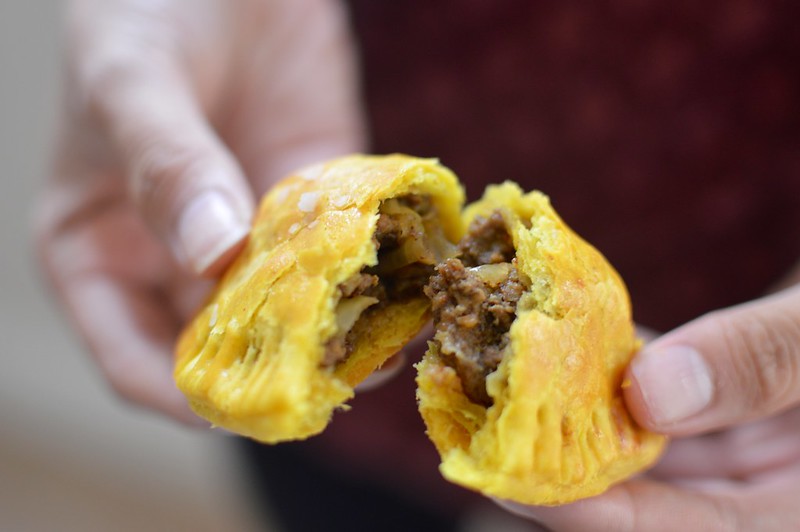 And since Nini helped assemble these bad boys, she was forced to pose with them. She’ll thank me years from now….maybe. 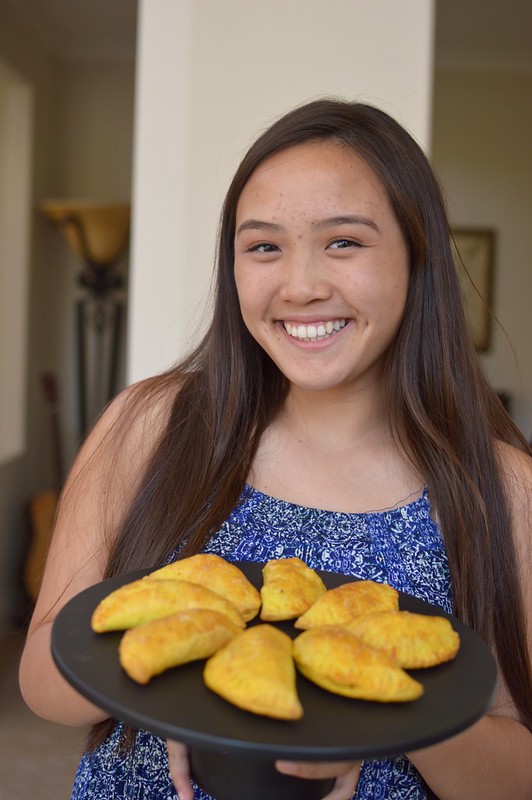 One of the side dishes we served up was a Trinidad Callaloo. Callaloo is the local name of a leaf vegetable known as amaranth. However, the dish callaloo is made up of slow cooked callaloo (or dark greens), with onions, coconut milk, spices and sometimes seafood. Although found on various Caribbean tables, I’ve been told that the Trinidadian version also uses okra so I used them as well. 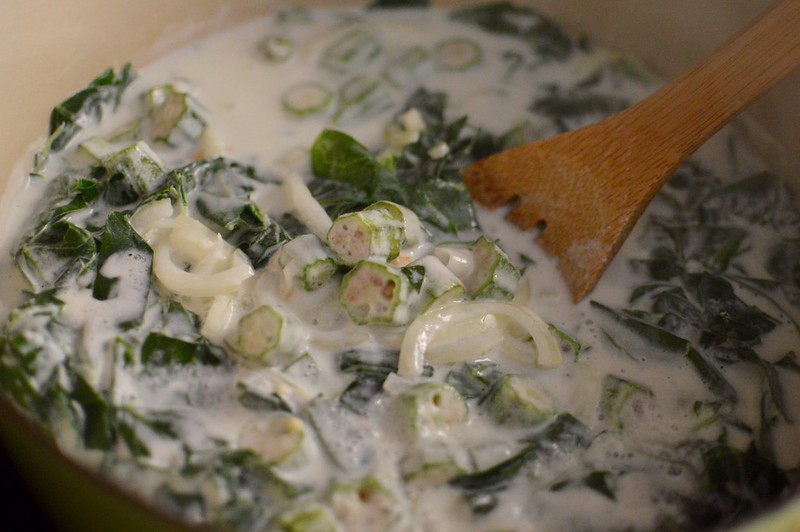 Since I couldn’t procure the callaloo leaf, I opted for collard greens as I figured its sturdiness could hold up to the long cooking and coconut milk. And instead of crabs, I threw in shrimp.

Now before you question how the finished dish looks, let me just say–TRY IT FIRST! It’s rich, creamy, earthy with a few kicks of spice. I also added a few splashes of fish sauce to further bring out the seafood notes since I didn’t use crabs and I found that it paired so well with the heat from the jerk chicken.

For those of you familiar with Hawaiian cuisine,  callaloo is quite comparable to Squid Lu’au. 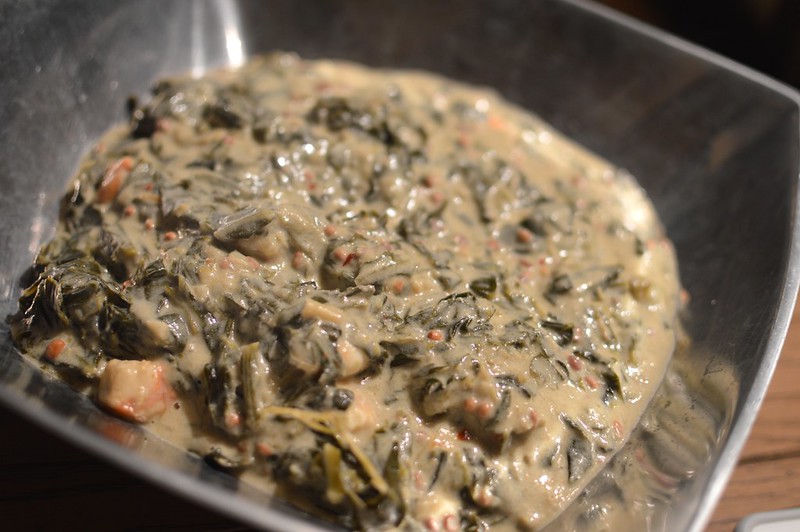 And of course– JERK CHICKEN! It would be silly to have a West Indies inspired meal without some kind of jerk dish!

Seester marinated a bunch and I’m talking a BUNCH of bone-in, skin-on chicken thighs in a myriad of jerk seasonings. It was hybrid of this recipe and this recipe which created one heck of a juicy, flavorful jerk chicken!

It would be fantastic as a pork marinade too! 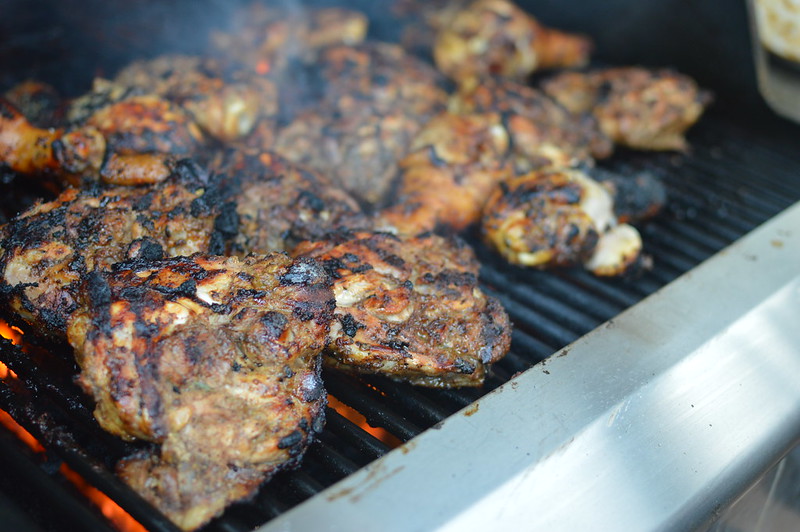 And of course dessert because it’s not a Fam Din without one–or two! 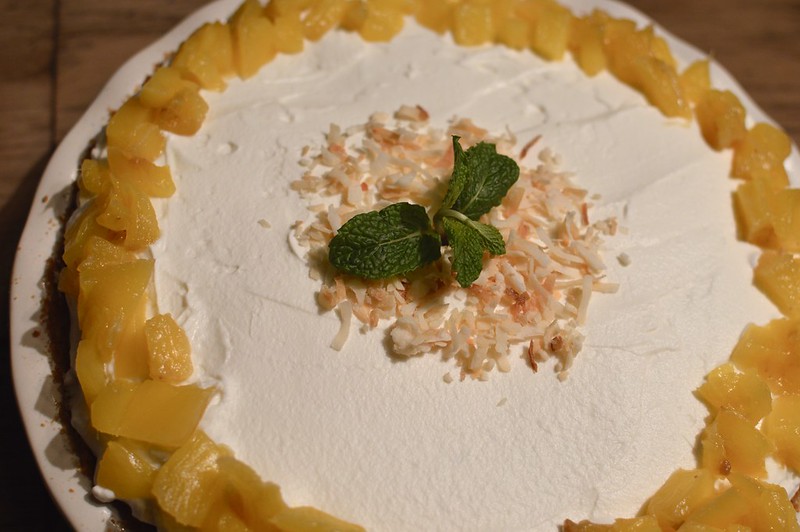 To finish up our meal, seestrah whipped up this Pineapple-Coconut Cream Pie that drew upon all the sweet flavors of the Caribbean. 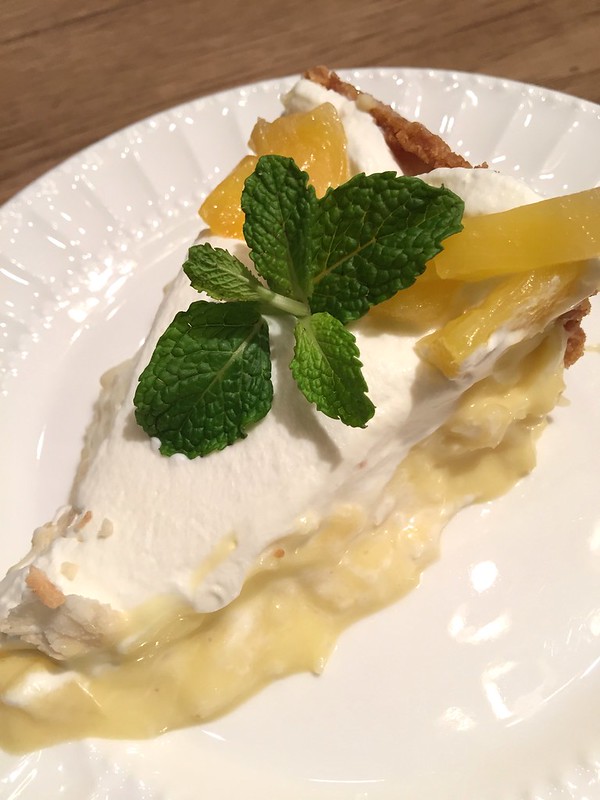 And I realize that the pic of the pie below is terribly out of focus but his toothless smile just makes my heart melt. 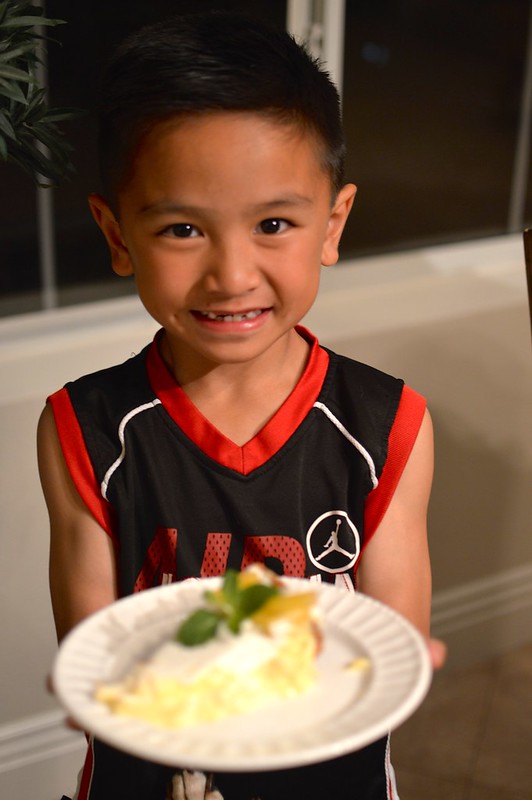 Yes–I may not have gotten my vacay but my belly sure did get transported to the West Indies. And I’ll definitely take that…. FOR NOW!