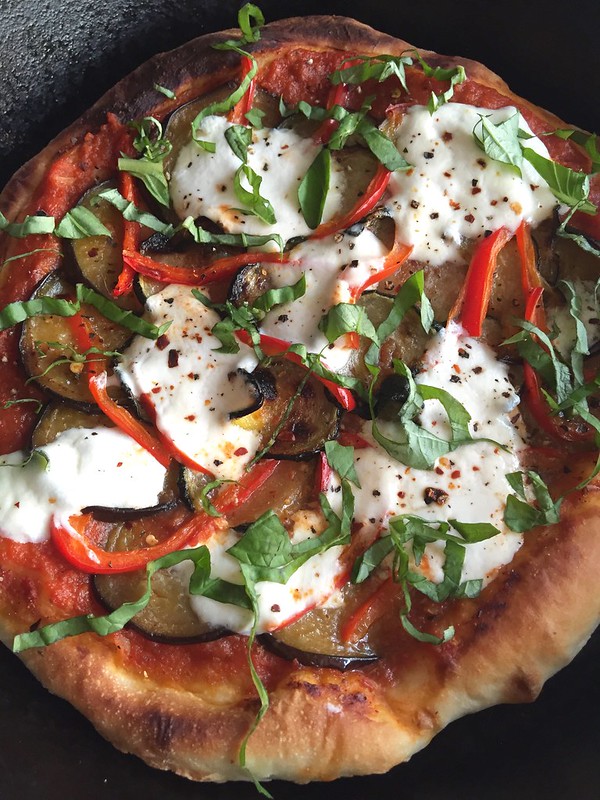 You may not know this about me but I’m a Disney freak.

For years my movie library was primarily filled with the clam-shell VHS cases of animated Disney films. Yes, you read correctly — VHS.

I can recite entire movies without effort, enthusiastically sing (albeit, in a tone deaf pitch) every song, and have a rather impressive “who’s-its and what’s-its galore” collection of Disney chotskies.

So it should be no surprise that my inspiration dish for National Pizza Month came while watching Disney’s Ratatouille the other week. The movie is now near 10 years old but if you haven’t seen it yet—drop everything and watch it!! 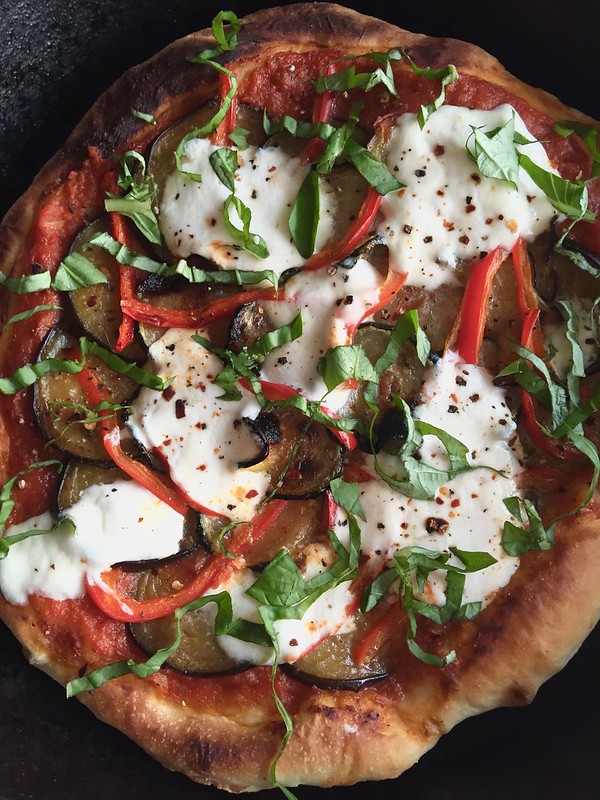 Ratatouille is a French Provençal dish that features veggies in a slow cooked stew. It was while Remy was layering the veggies for his remake of Ratatouille that I thought –HOT DAMN! Those flavors would be fantastic on a pizza! Eggplant, squashes, peppers, tomatoes, basil — perfect!!!

With those flavors in mind, I took to my beloved cast iron skillet method to fix up a gorgeous pizza. I smothered a generous layer of my homemade marinara that mimicked the stewed tomatoes of Ratatouille with its onions, garlic, oregano, and fennel. Next came a shingled layer of roasted eggplant, roasted zucchini and few slices of red bell pepper that I chose not to roast so that it could hold a bit of its crunch through the short cooking process. After the whole pizza broiled, I placed torn pieces of burrata on top because burrata makes everything better! And right before serving, I sprinkled the the whole thing with some sea salt, fresh cracked pepper, chili flakes and ribbons of fresh basil.

What do ya think? Isn’t it a beauty? And it tasted even better than it looked!

Remy would be proud.

Preheat oven to 475 degrees F. Place the eggplant and zucchini on a baking sheet. Brush each slice with olive oil and sprinkle with kosher salt. Roast the vegetables in the oven for 10-15 minutes until they are soft and become golden. Remove the sheet and allow to cool.

While the skillet heats, roll out the pizza dough onto a floured surface–you’ll want it a tad smaller than the width of your skillet. If you have a pizza peal, sprinkle it with cornmeal and transfer the pizza dough onto it. If not, you can also use a wooden cutting board. Brush olive oil over the dough.

Once the skillet has heated for the appropriate length of time, quickly and CAREFULLY remove the skillet from the oven. Slide the dough into the skillet. Quickly spread the marinara over the dough and sprinkle the minced garlic and thyme leaves over. Layer with the slices of eggplant, zucchini and bell pepper. Carefully replace the skillet in the oven so it sits directly underneath the broiler. Close the oven door and allow the pizza to cook for about 60 seconds. Open the oven door and rotate the skillet 180 degrees. Close the door and allow another 60-90 seconds underneath the broiler. Once the crust and bell peppers are slightly charred, CAREFULLY remove the skillet from the oven and place it on a cooling rack for 3-4 minutes. While the pizza rests, top with burrata cheese and allow the heat to melt it.

After the pizza has fully rested, sprinkle the tops with sea salt, freshly cracked black pepper and red pepper flakes. Sprinkle the basil over the pizza and transfer to a cutting board, slice up and enjoy!

*If you don’t want to use the cast iron skillet method, assemble the entire pizza (with the exception of the basil and cheese) on a baking sheet. Bake in a 500 degree F oven for about 15-20 minutes until the crust becomes golden brown. Remove the sheet from the oven and follow the remaining steps of the above recipe.