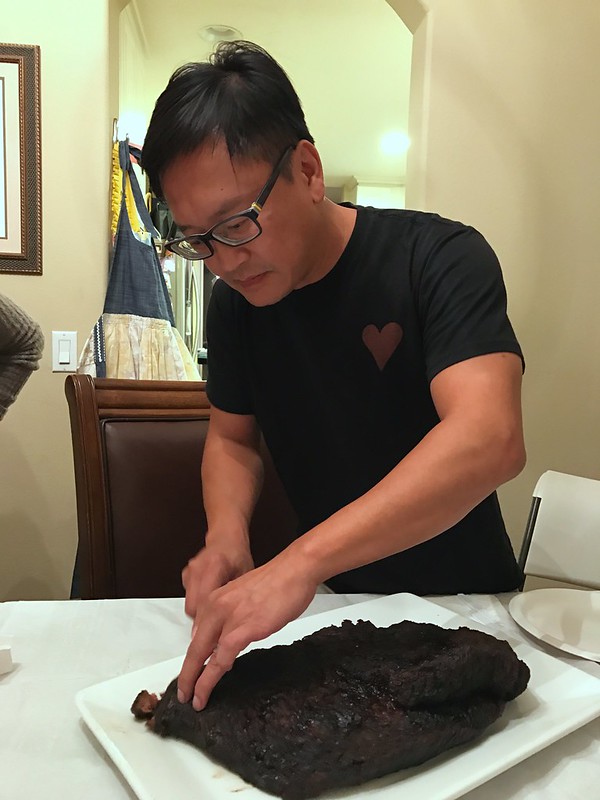 As you may have noticed, I have a few Sunday Family Dinners I need to catch y’all up on. Three to be exact.

I know, totally tardy to my own party.

I was having one of those existential moments for a bit. You know…those “Who am I? What am I? Where am I?” moments where you begin questioning everything under the sun. And that included an evaluation of this blog.

I’ve been sharing on this space with you all for a little over seven years now and I wondered if it was all still relevant. But after a lot of musings, I’ve decided—what the hell? As long as I still have something to say, I’m gonna say it! And if I’m still having Foodventures, I’m still going to share them.

That’s not to say that I won’t be experimenting with a few things this year to give some new things a try. So stick with me gang—I’m still here and I hope you still will be too. ❤

Back to our Fam Dins!

Let me pick up where I left off–which is our Smokin’ Family Dinner! It happened to be our brother’s birth-month so birthday boy opted for beef… in the form of Smoked Brisket! And not only that, but he also volunteered to be in charge of the main dish for his dinner. What a trooper!

In full disclosure, V (well actually, NONE of us) had ever smoked a brisket before. Heck–we didn’t even have a smoker! So brother, being my brother, decided to do a trial run the month before and bought a 14 pound brisket to experiment with.

V ended up rigging seester T’s grill into quite the MacGyver smoker! And it turned out beautifully! So when it came time to make it for Fam Din, he was prepared! 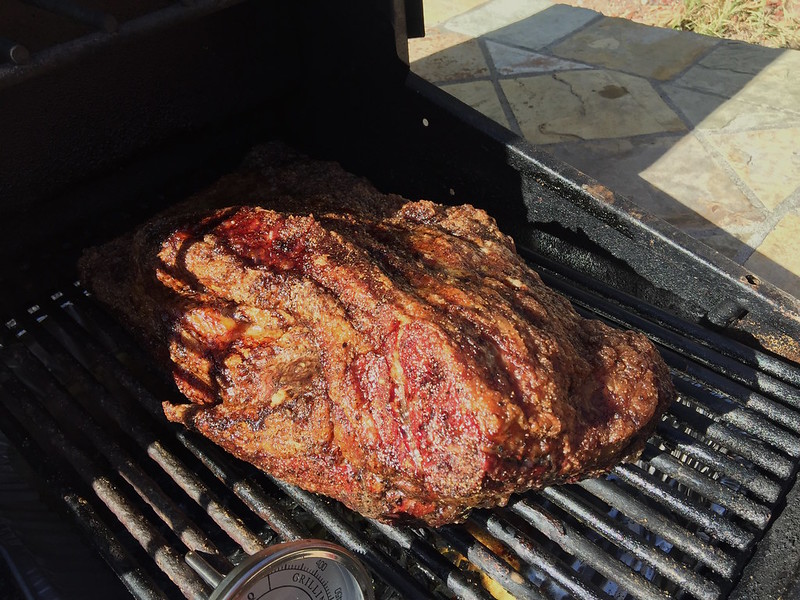 If any of you have smoked a brisket before, then you know it takes FOH-EVAH! Low, slow and even heat. So what do we do when we’re all sitting around for 14+ hours waiting for brisket?

We have a few cocktails!

I’ve no idea if he’s sipping on whiskey or Sculpin here….because truthfully, we consumed a lot of both throughout the entire cook time!

And YES, that is a Christmas tree you’re seeing in this pic.

Told ya’ I’m trying to catch up! 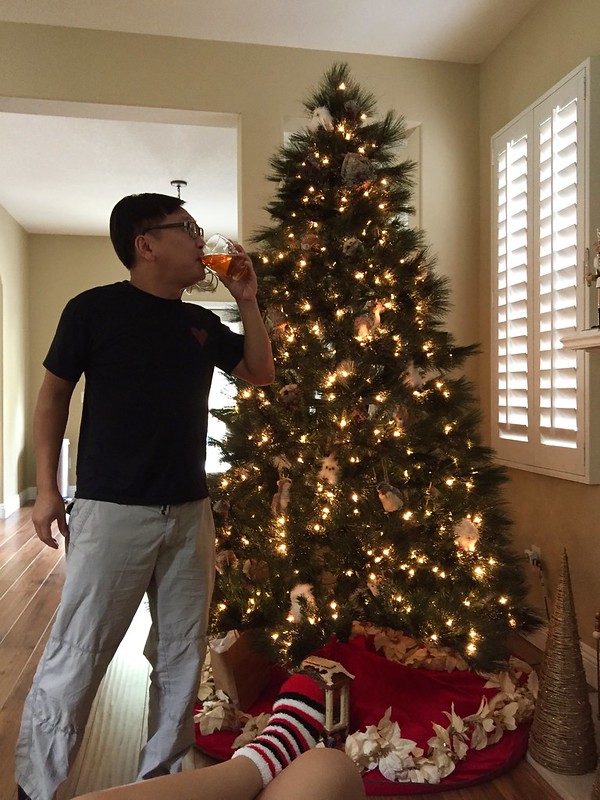 Oh! And because we just happened to have a spare turkey around (I mean, c’mon…don’t you have spare poultry laying around??), we decided to smoke it to. Why the heck not?

See the little wood chip chamber V made on the left of the turkey?

I’ve got to say, that’s pretty damn gorgeous–isn’t it? 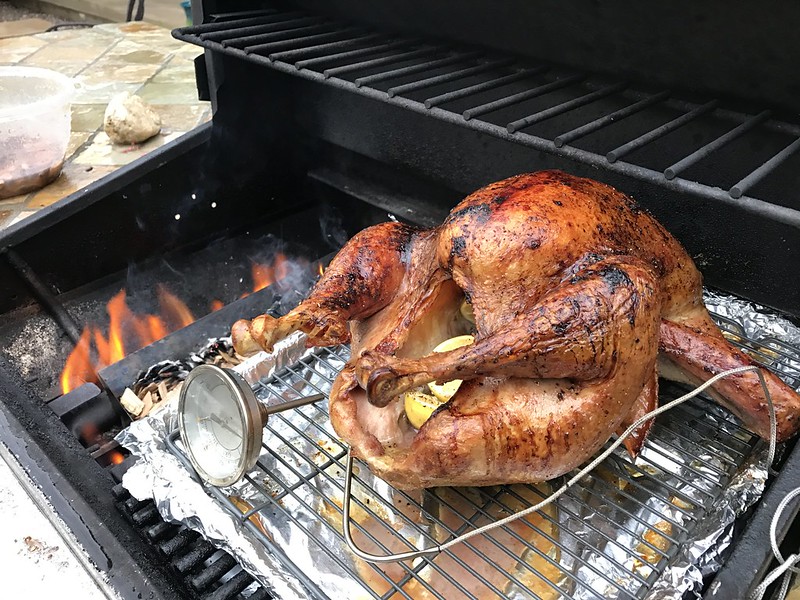 And because even WE cannot live on smoked meat alone, we put the kiddos to work helping with the side dishes. 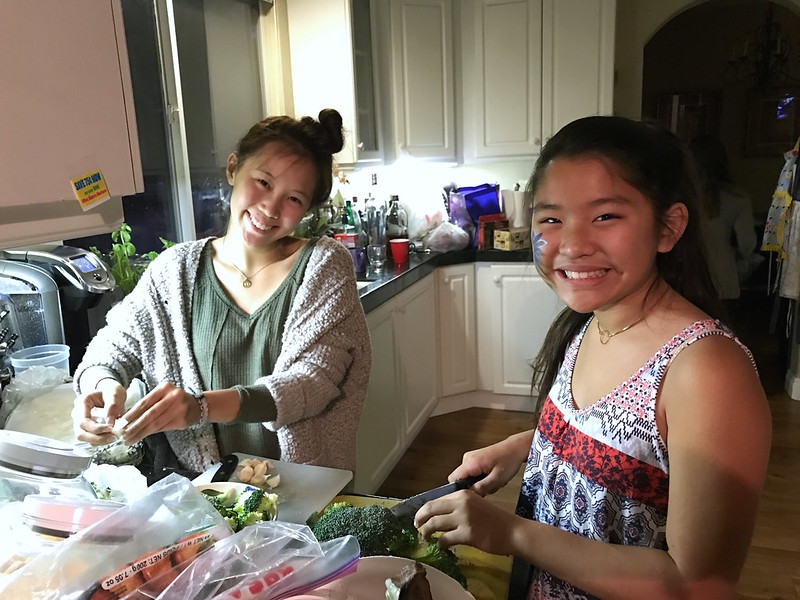 While the smoke was going and the veggies were being chopped, I whipped up this super easy and fun Armadillo Cheese Bread for us to nosh on. Warm and toasty sourdough boule stuffed with mozzarella, parmesan, tons of garlic herb butter and topped off with fresh parsley.

I mean, COME ON! EVERYTHING is beautiful about this situation! 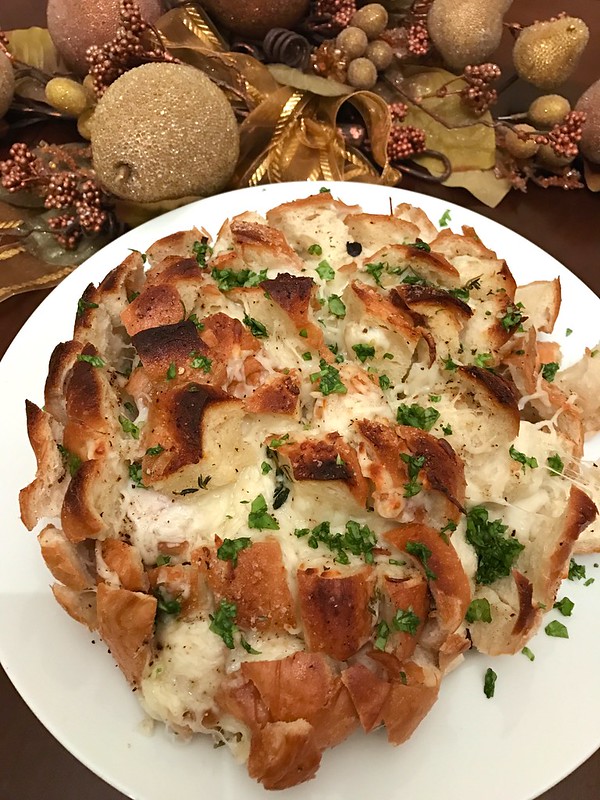 Pssst! Caught brother watching a quick video by Aaron Franklin of Franklin Barbecue in Austin for some guru brisket tips! 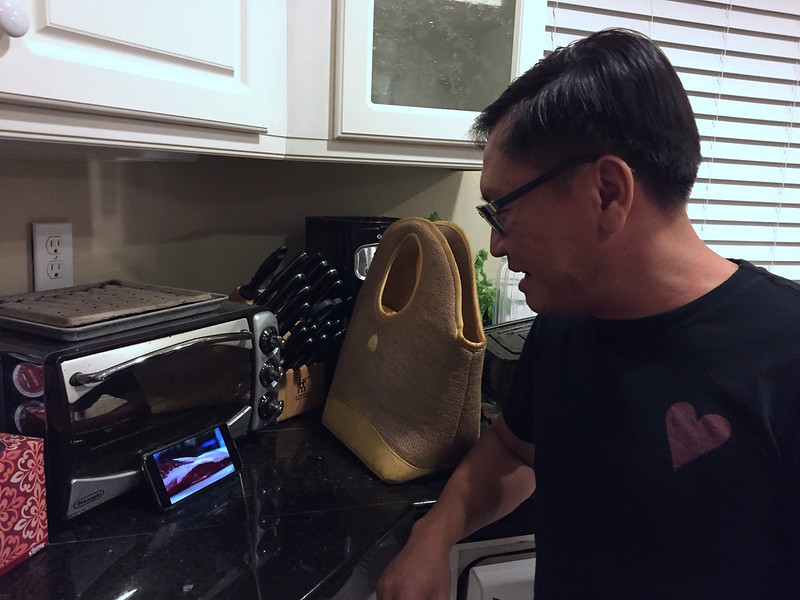 After a total of 20 hours combined smoking time for the brisket and turkey—-it was finally done!!! We carved the turkey before bringing it to the table and here my niece Nini is prepping the bones for some good ol’ fashion stock.

And yes, Bella is trying to get some of that smoked turkey goodness! In case you were curious, she was successful. 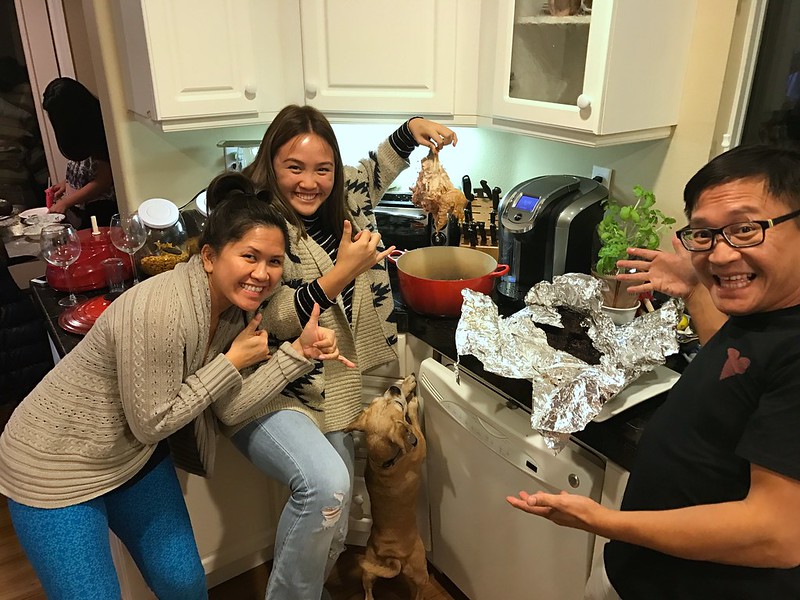 We had quite the plethora of fixins’ to go along with the protein. 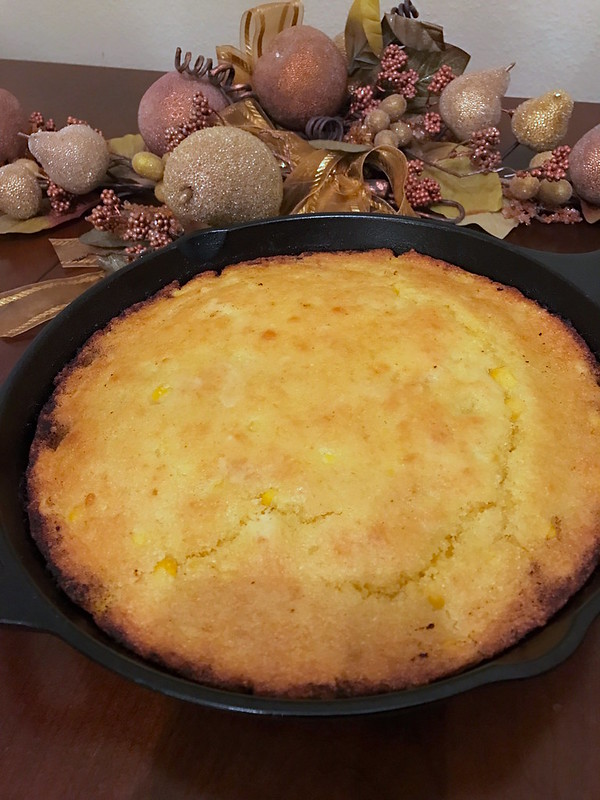 ….a pan full of Roasted Cauliflower and Broccoli .… 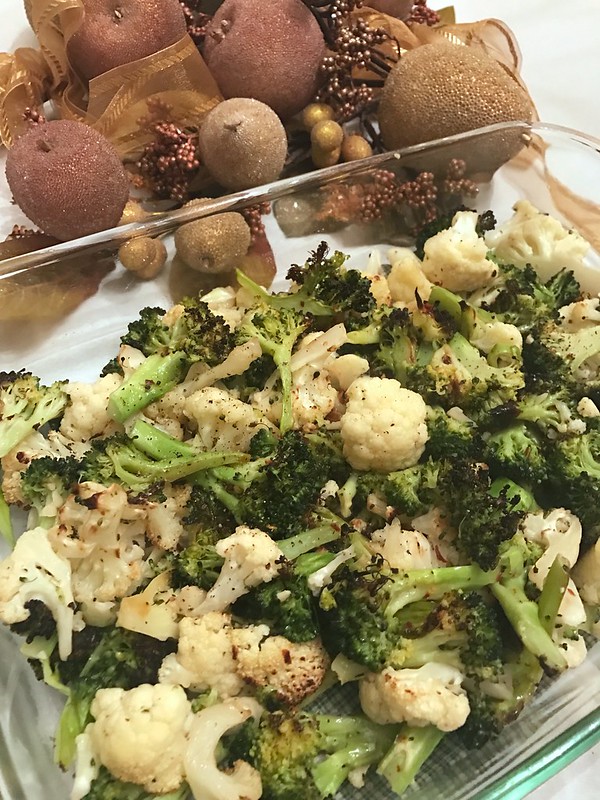 ……and of course, Baked Bacon Macaroni and Cheese. I mean, if you’re gonna do it, DO IT!

And we always do. 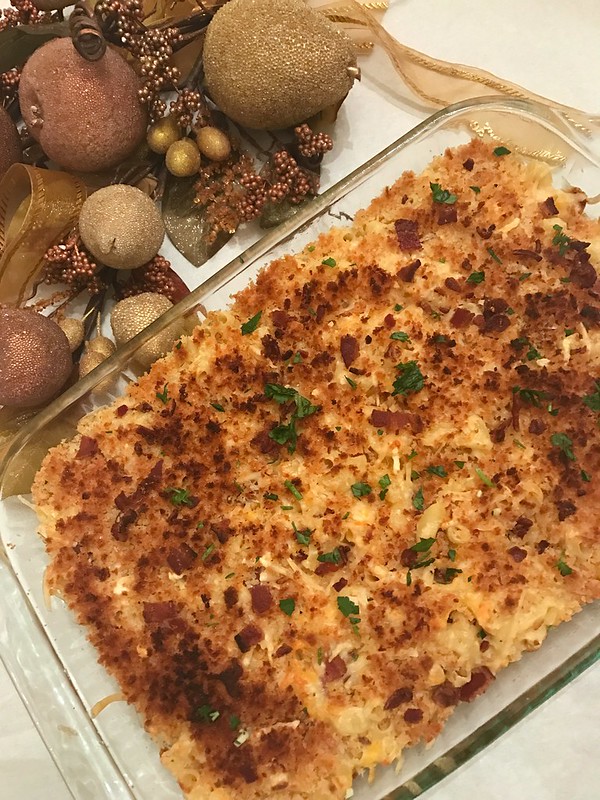 Seester T knocked it out of the park with this soulful Cheesy Shrimp and Grits. Now peeps, I like to think that I make a pretty mean bowl of Shrimp and Grits, but I think hers is better. The use of the shrimp heads in the sauce created this deep, rich, flavor that was glorious!

Hmmmm….maybe I can convince her to make it for me this weekend? #ImTheBabySister 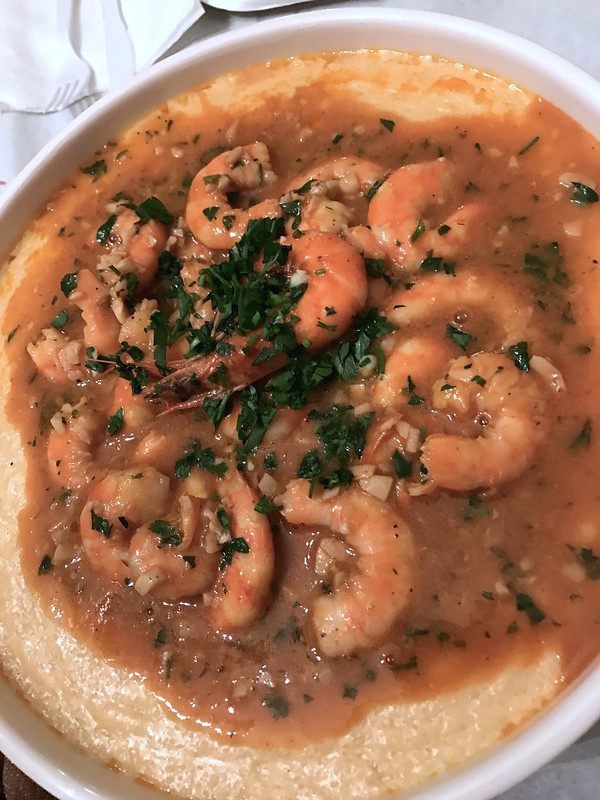 And finally, the pièce de résistance — the Smoked Brisket! I mean look at this BEAUTY! Isn’t the color just splendid!! Tender, fatty (in a wondrous way) and smoky.

Completely worth the wait. 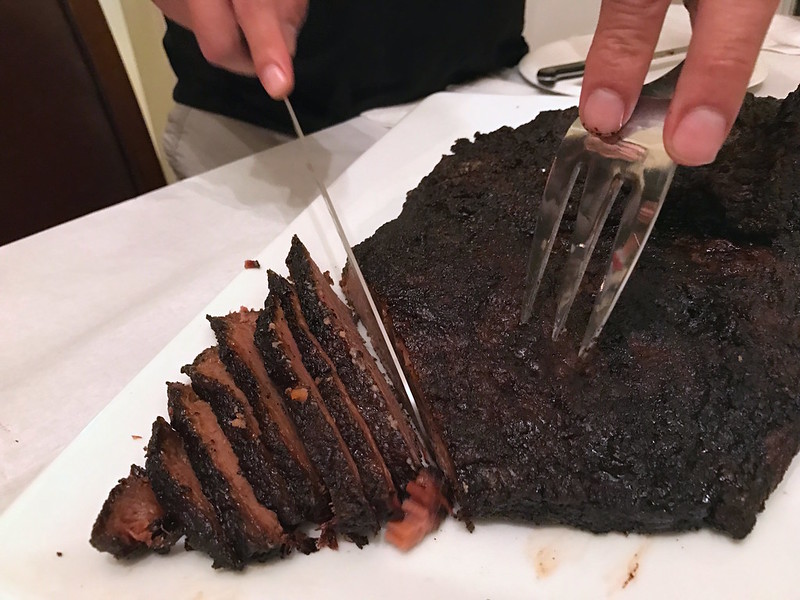 She was completely hypnotized by her uncle’s cutting skills. 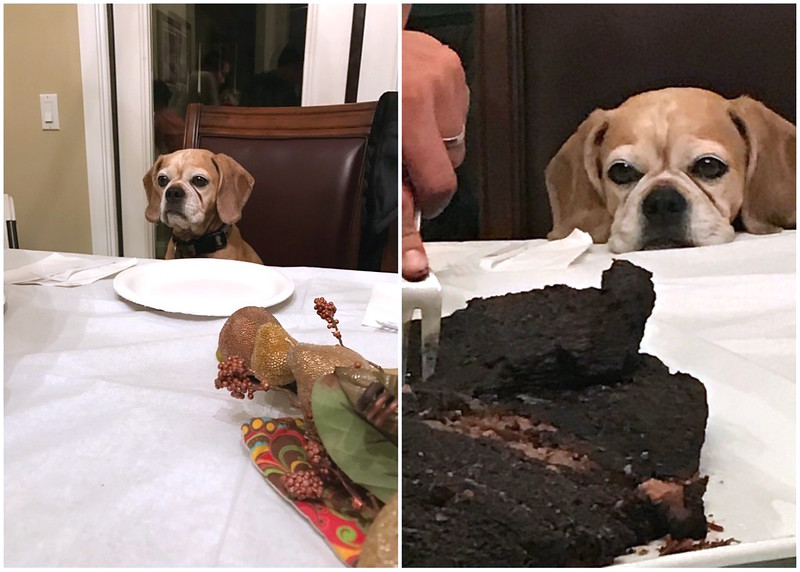 After inhaling what I deemed to be an INSANE amount of food, I began prepping dessert. Because OF COURSE I would. 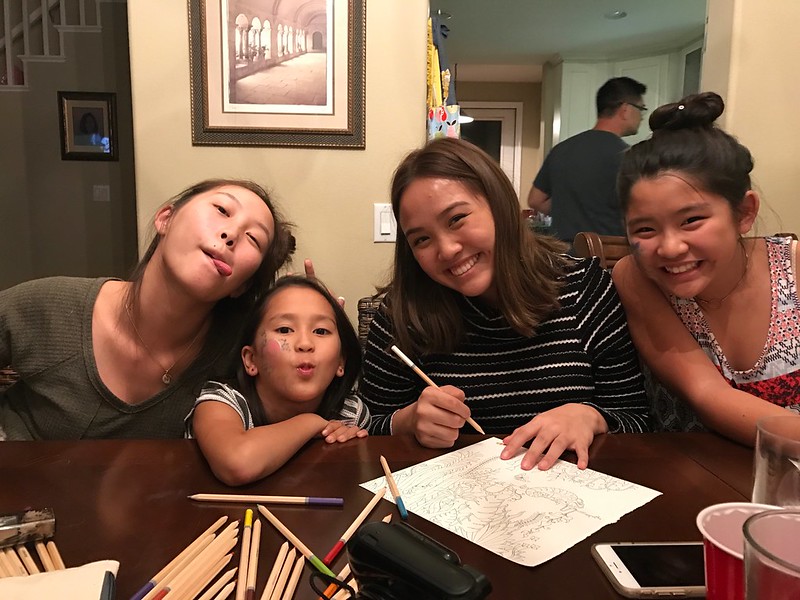 As for the adults? Well, let’s just say we broke out into a solid karaoke and dance session of our favorite 70s-80s songs (A-Ha! Erasure, ABBA, New Order...) and maybe even the fog machine and strobe light came out. And by maybe…IT DID!

You think I’m exaggerating, but I’m really not.

Unfortunately I was told that if any pictures or videos of us singing/dancing surfaced on this site, it would be the last y’all would ever hear from me. But trust me, it was quite epic. 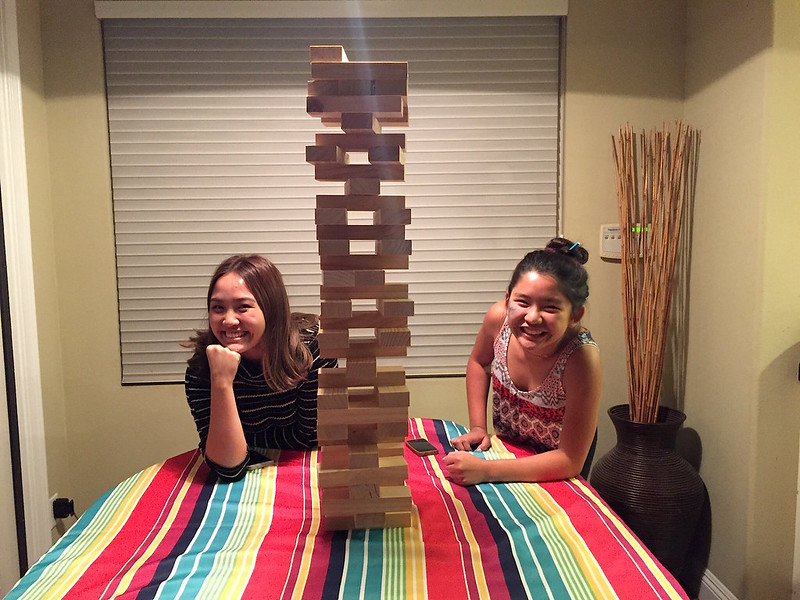 And after all the dancing and shenanigans was done, it was time to dig into the Chocolate Molten Lava Cakes with Vanilla Bean Ice Cream! 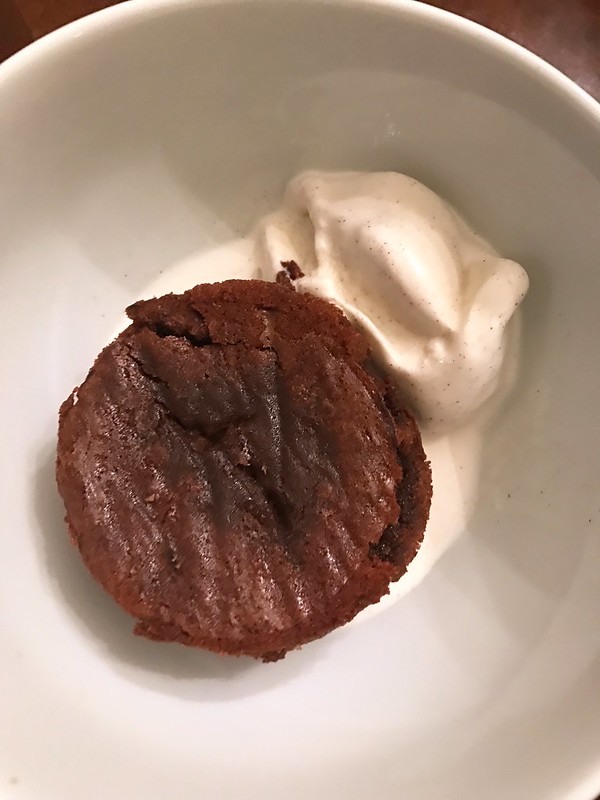 Smoking brisket and turkey…another first for us but what a Foodventure!

3 thoughts on “Our Smokin’ Family Dinner”