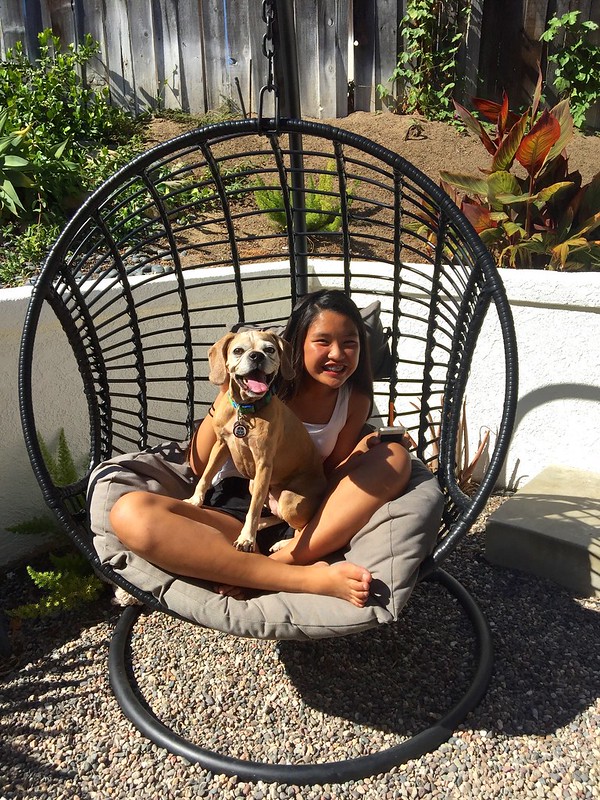 How is it possibly Fall already with October just knocking on the door? Although, if you’re like SoCal these past few days, we’re still in a heat wave with the temps in mid-80s. The weather has been so strange lately that we actually got down to the low 60s last week (chilly for San Diego standards) and now we’re back in the thick of summer-like weather.

Speaking of summer, we had some brilliant Fam Dins over the past few months. The food is always great—even when it’s not dee best (flashbacks to my less than successful beef wellington or tarte tatin ). And there’s always more shenanigans than I can recount. 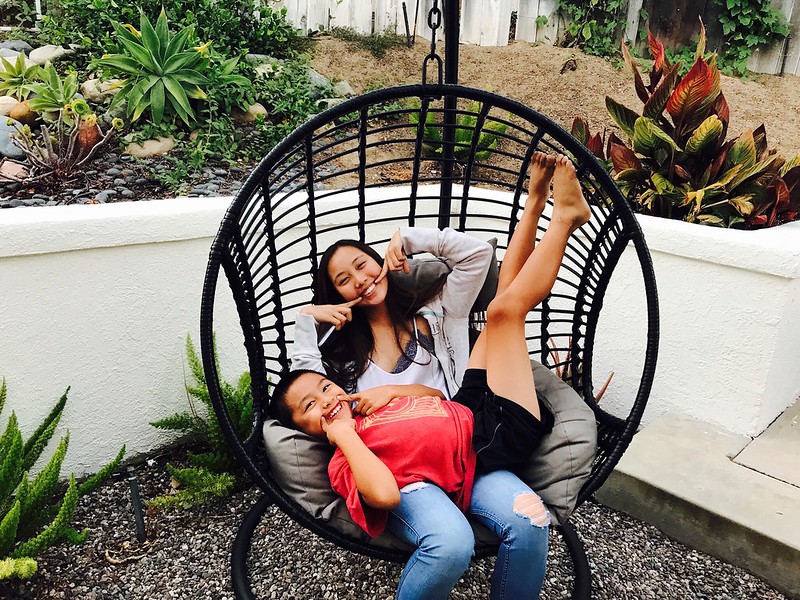 For this particular dinner, we were celebrating seester N and B.I.L. R’s birthmonth. But the day actually started early as we trekked down to Long Beach to cheer on Maya at her Hula/Tahitian performance at the Dragon Boat Races.

I mean, how freaking adorable is she?

After the festival and a quick bite of lunch, we headed back to Fullerton to get prepping on dinner. While we got to work in the kitchen, we sent the kiddos to the store to pick up a few extra items for us–just one of the perks of having munchkins that are of the driving age now. 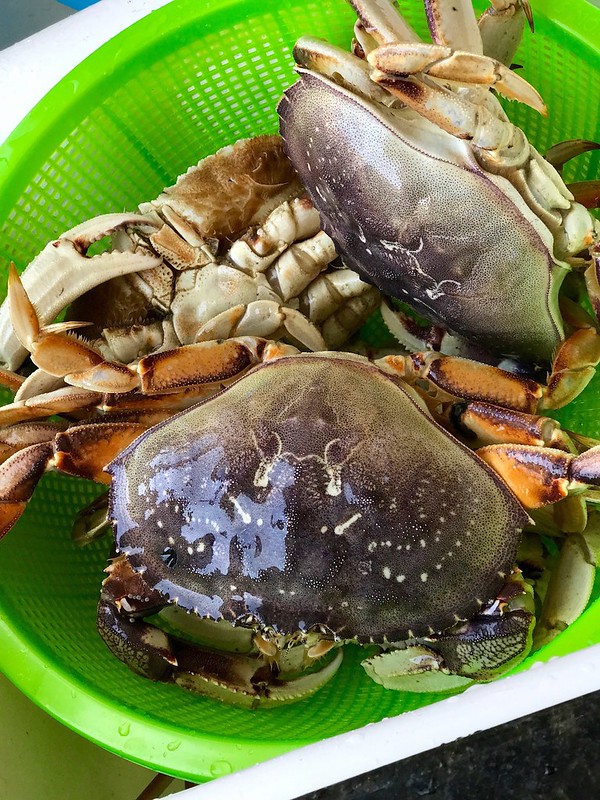 For dinner, R wanted simply prepared dungeness crabs. But while at the store, seester ended up picking up some lobsters too.

I totally supported that decision. 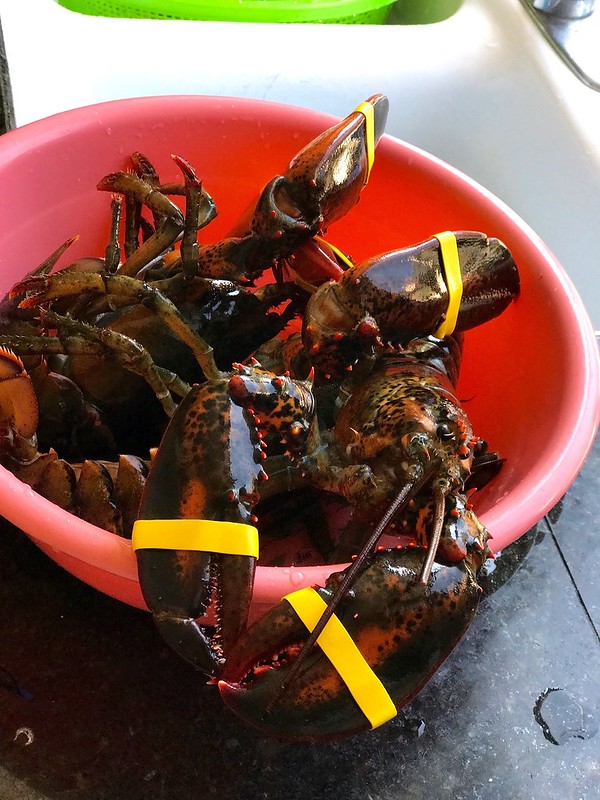 The munchkins came back shortly after supplied with boba, slurpees (kids after my own heart) and a surprise they found at 7-11. More on that soon.

Nini saw the lobstahs and quickly picked them up and posed for a pic. I  have at least a dozen pictures of her mom doing the same thing over the past few years–same genes and all. 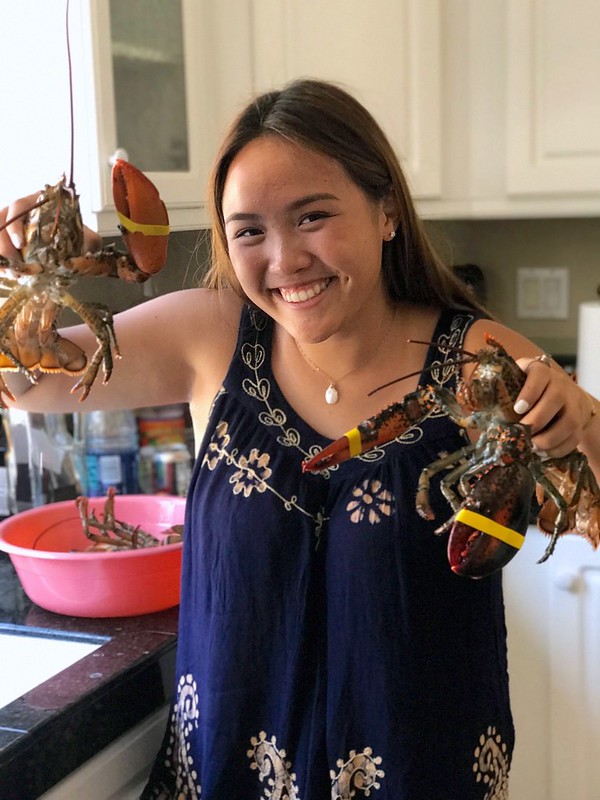 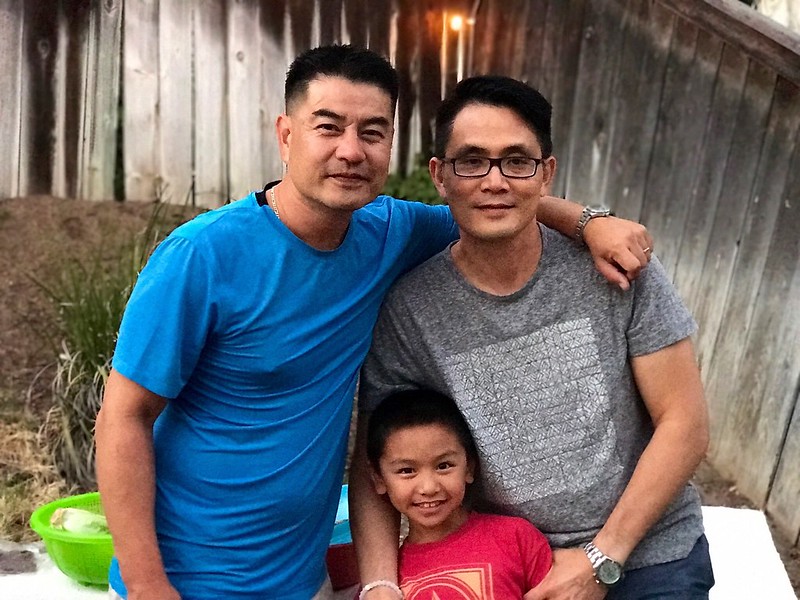 While the sibs were bustling away with prep, I turned my efforts to something extremely important.

Since it was so hot out and because the kiddos had picked up their own slurpees, I whipped up a batch of Tropical Fruit Wine Slushies. Adult slurpees in my opinion. 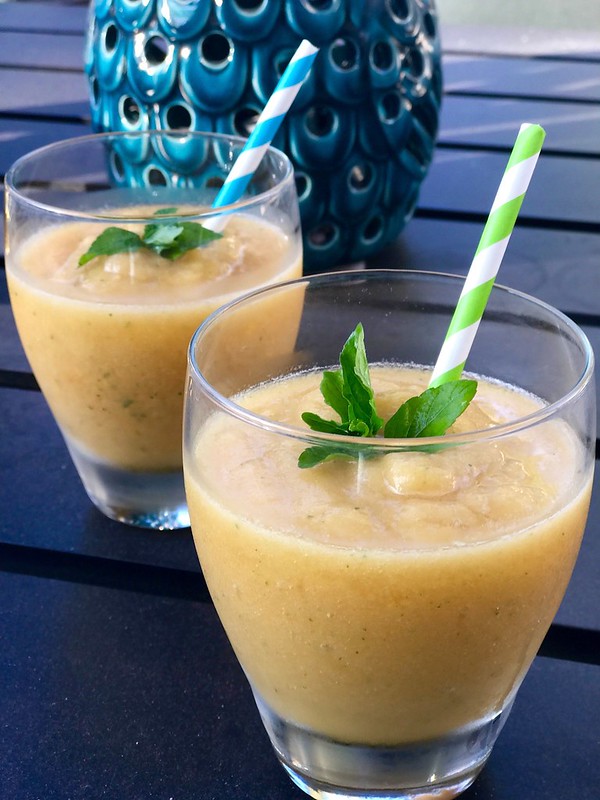 In a heavy duty blender, I filled the pitcher with frozen tropical fruits (mango, pineapple, papaya), a whole bottle of sauvignon blanc, lime juice, simple syrup, fresh mint leaves and a few splashes of vodka. Everything was quickly blended and that’s it!

Deliciously cold and refreshing. Another one of those summer-in-a-glass types of cocktails. 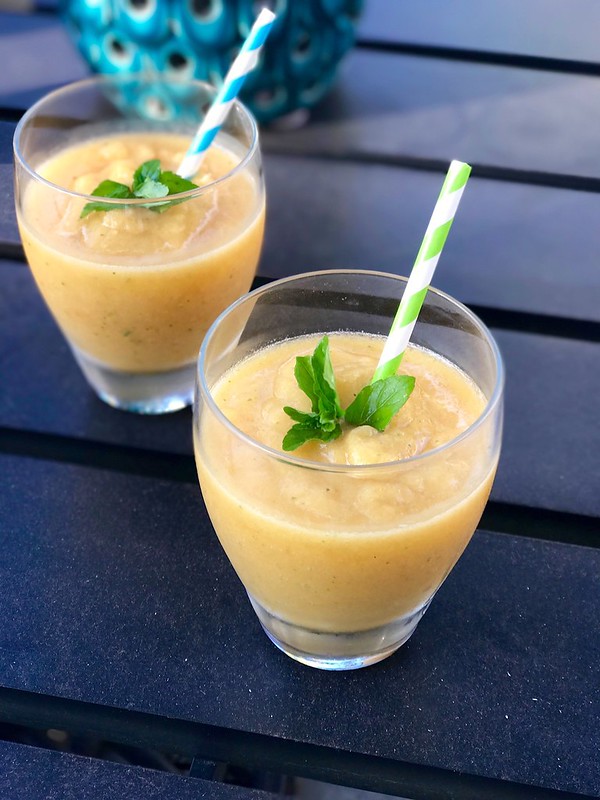 Remember that surprise I mentioned that the kiddos found at 7-11?

It was henna paste!

And the coincidence was that earlier that day, we were trying to get T’s friend over that night to do henna for us but things didn’t work out because she was out of the paste.

Why did we want her to come over and do henna for us? 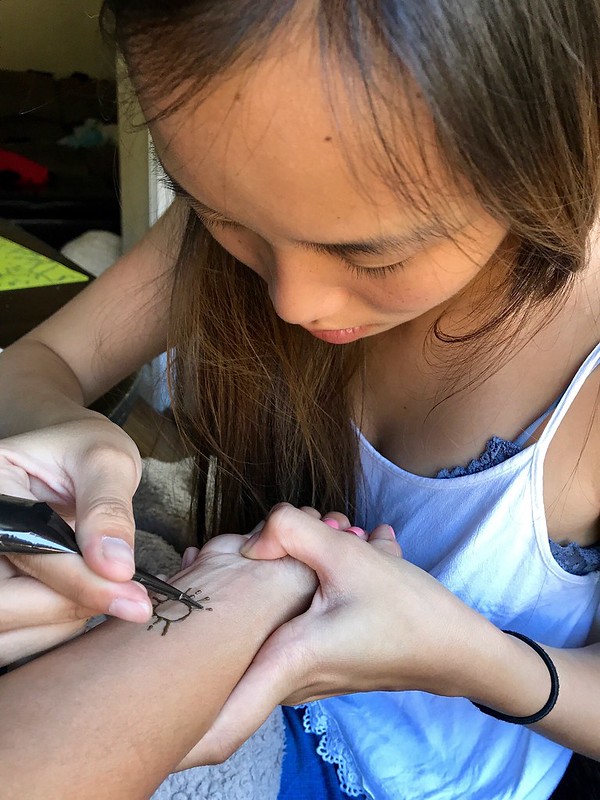 Henna is a temporary body art that is imprinted on the skin through a paste made from ground henna tree. The paste the munchkins found were premixed and sold in little conical tubes for ease of application. Kind of a random thing to find at a 7-11 in Orange County–but sometimes you just got to go with fate. 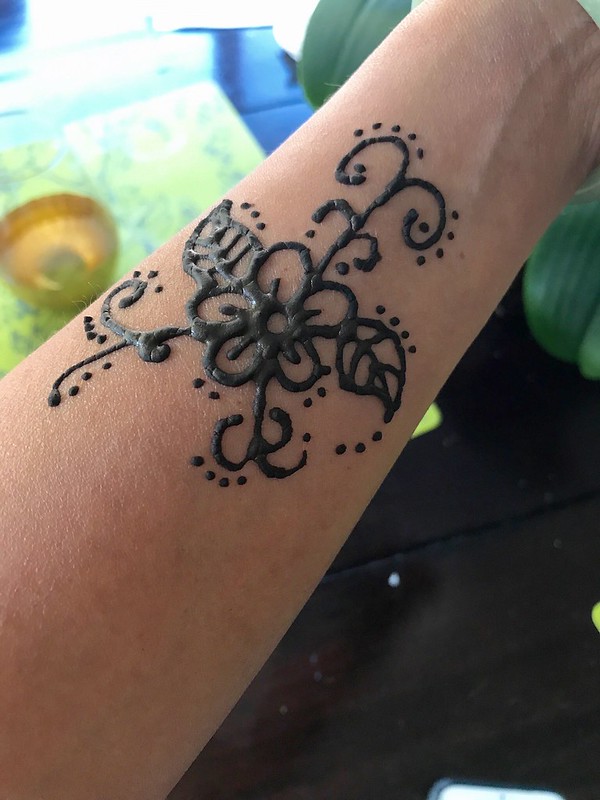 And with that–we went into full henna mode! The gals had a wonderful knack for it and did all of these beautiful designs by free hand. 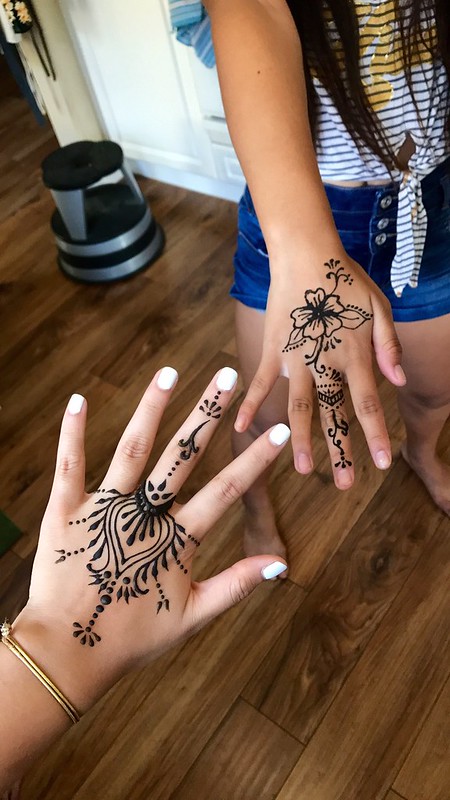 Seestrah and I are thinking of hiring them out for parties. 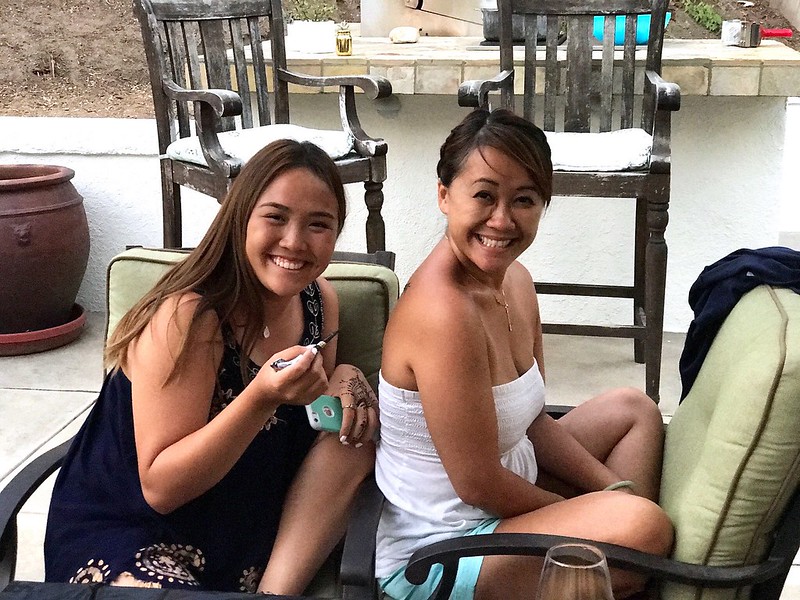 Check out this dragon Nini did for me–isn’t she so talented?

Apparently having an actual dragon tattoo wasn’t enough for me so I needed a henna one too.

Mother of Dragons and all….

Okay, I’m more like Mother of Puggle but Bella has the heart of a dragon. 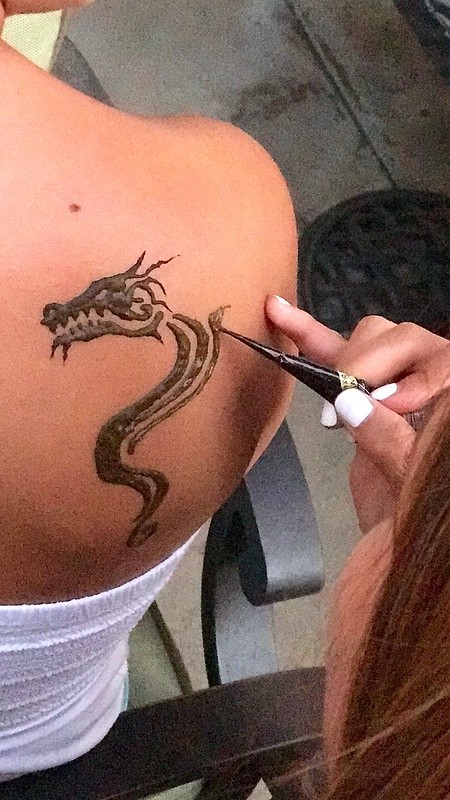 And then we all started getting a rumbly in our tummy. Apps time!

I made one of my go-to bites that I love having all summer long — Burrata Bruschetta with a Balsamic Reduction. Nina lent a hand by pan frying (yup PAN FRYING) the sourdough in olive oil and rubbed it down with garlic cloves. It was topped with chopped heirloom tomatoes, more fresh garlic, EVOO, red chili flakes, basil, ooey-gooey burrata and a drizzle of reduced balsamic vinegar.

These are great as apps but there are so many times that I whip this up for a quick light lunch when it’s warm out. Perfect. 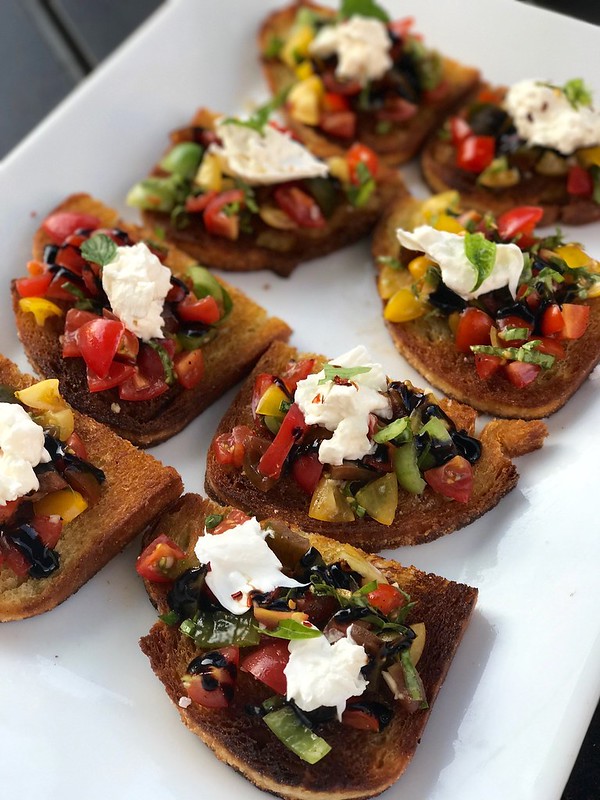 And then it was time to steam those crustaceans!

Are those even things? 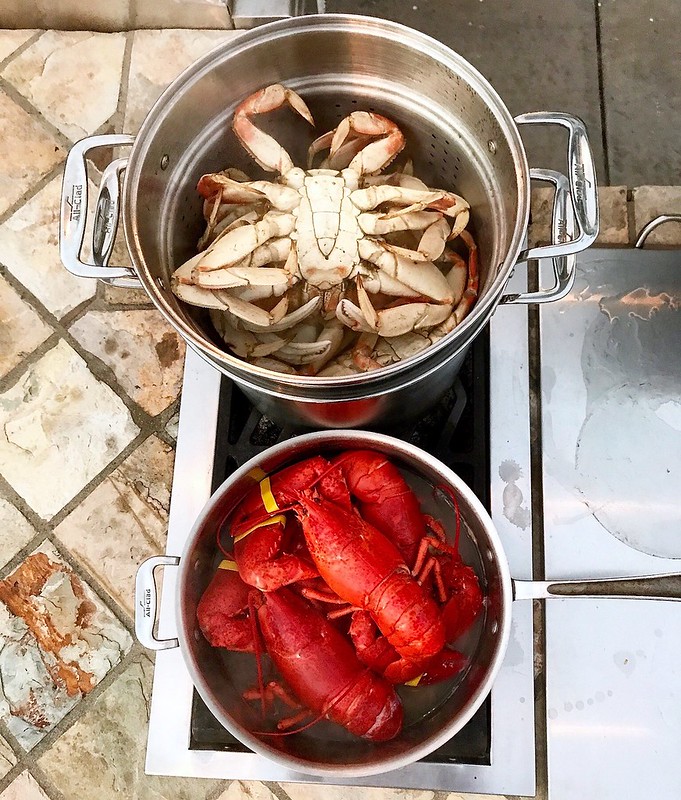 T also picked up some ginormous giant clams (yes, I know that was redundant but they were HUGE!) so we threw those on the grill along with some romaine for a salad. 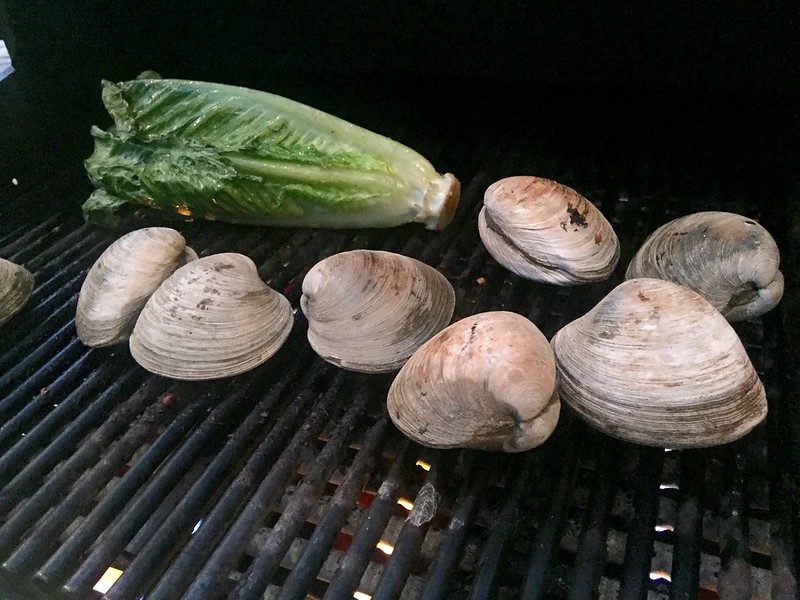 And after the wine slushies were gone, there was just wine. Well, lots of wine.

The chardonnay from Starmont is the fuel T and I guzzle down every Black Friday to muster the energy to keep up with our other sibs’ shopping marathons. Without it, we would be passed out by 9am. 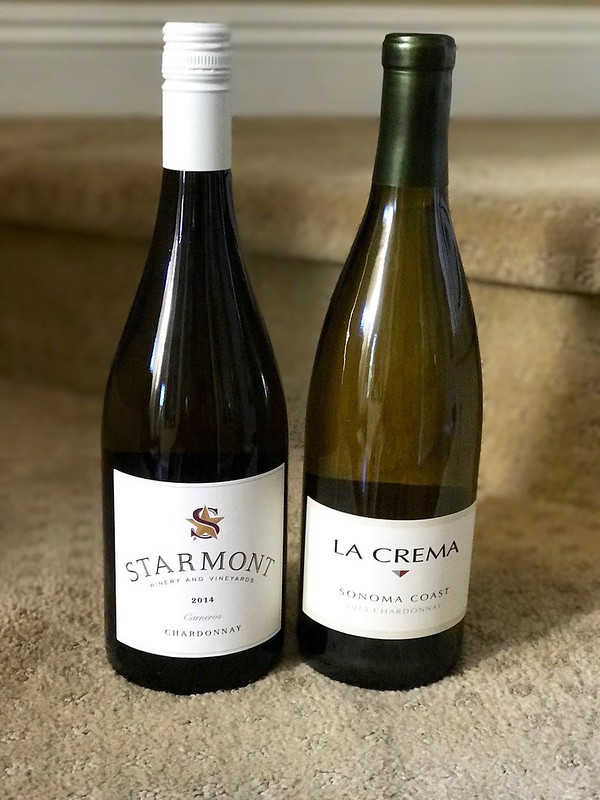 Speaking of passing out…

She had a VERY action packed day and was down for the count. But she still wanted to be in the midst of the action and decided to take her naps underneath us. 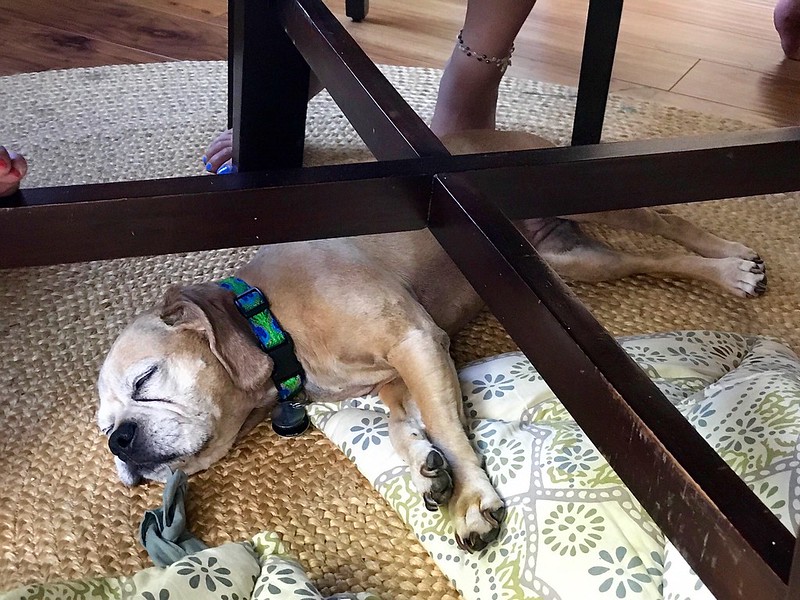 Here are those giant clams again. Once out of the grill, T spooned a butter-soy-garlic sauce into them and topped it with fresh cilantro. Those buggers were super meaty! 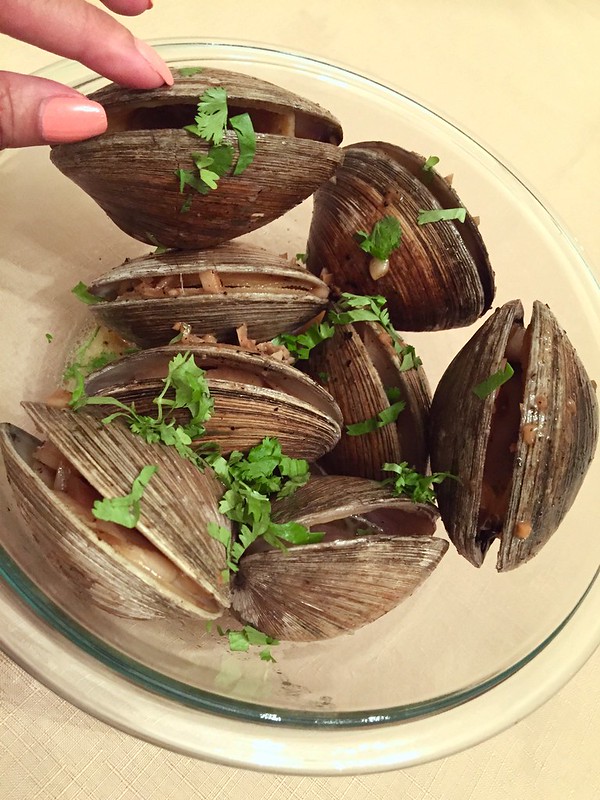 N made this rad salad with grilled romaine lettuce, cukes, tomatoes, and avocados which was topped with pickled red onions and a grilled flank steak that had an Asian inspired marinade. The salad had a light soy-sesame dressing and was delectable! 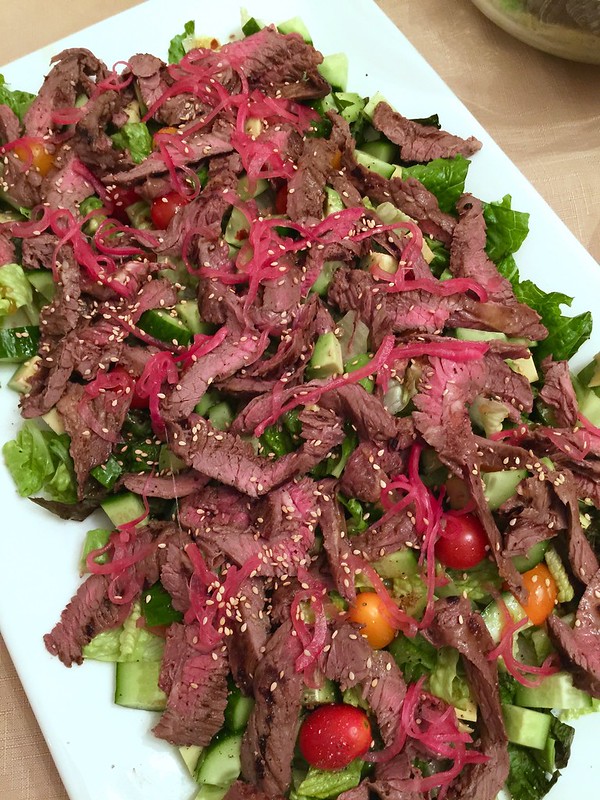 Since we went for a simple steamed prep for the crabs and lobsters, N upped the gluttony ante and made a big ol’ bowl of Garlic-Butter Noodles. YES PLEASE! 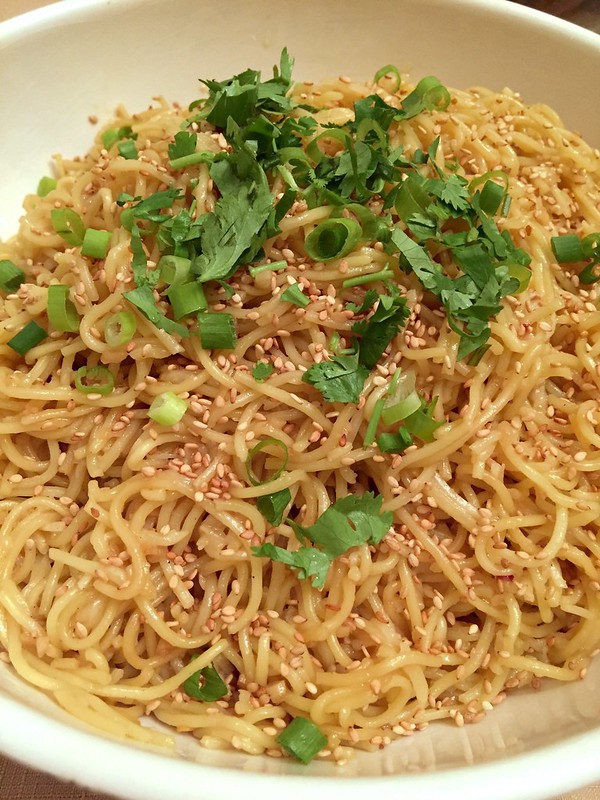 The terrible pic does not do the food its justice.

I had some dang impatience to eat so I couldn’t be bothered to fiddle with adjusting the camera. 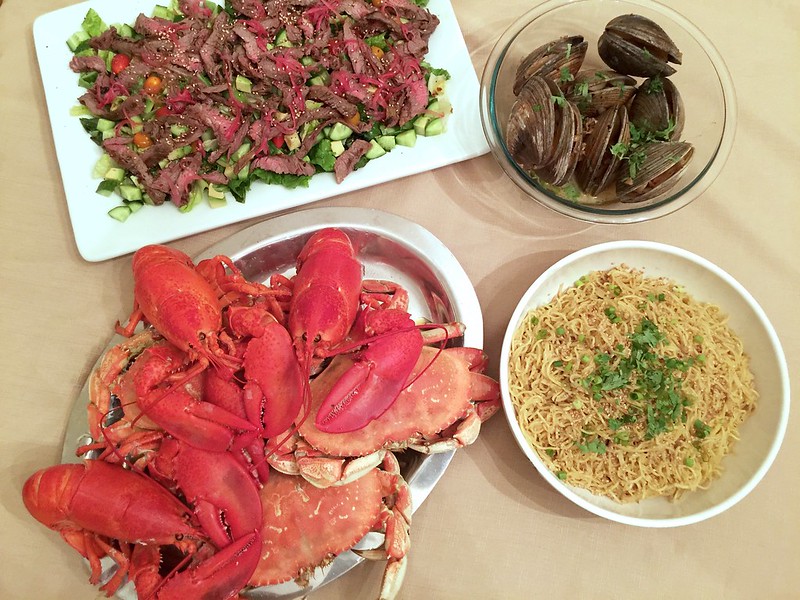 I spy a glowing-eye Bella. 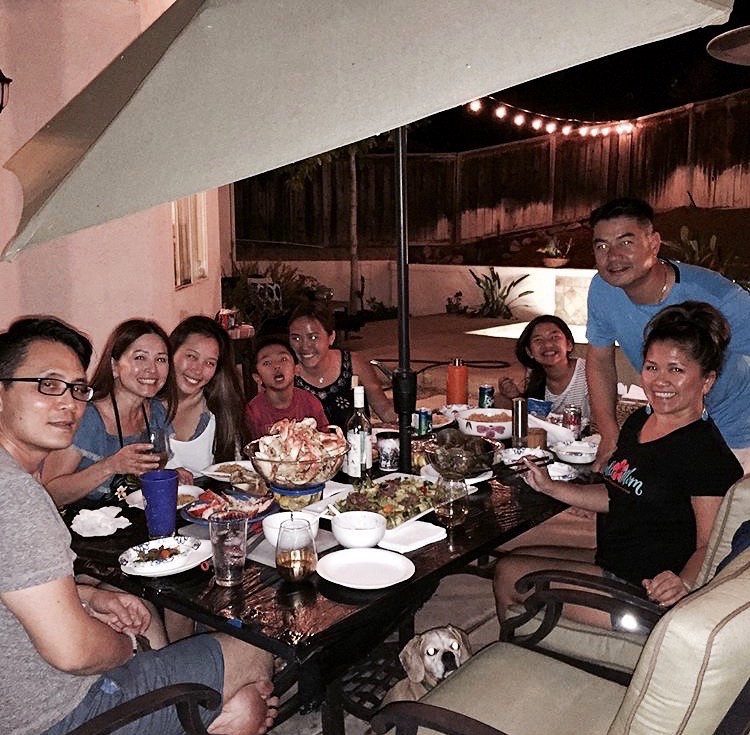 After gorging ourselves on savory, we turned to sweet. 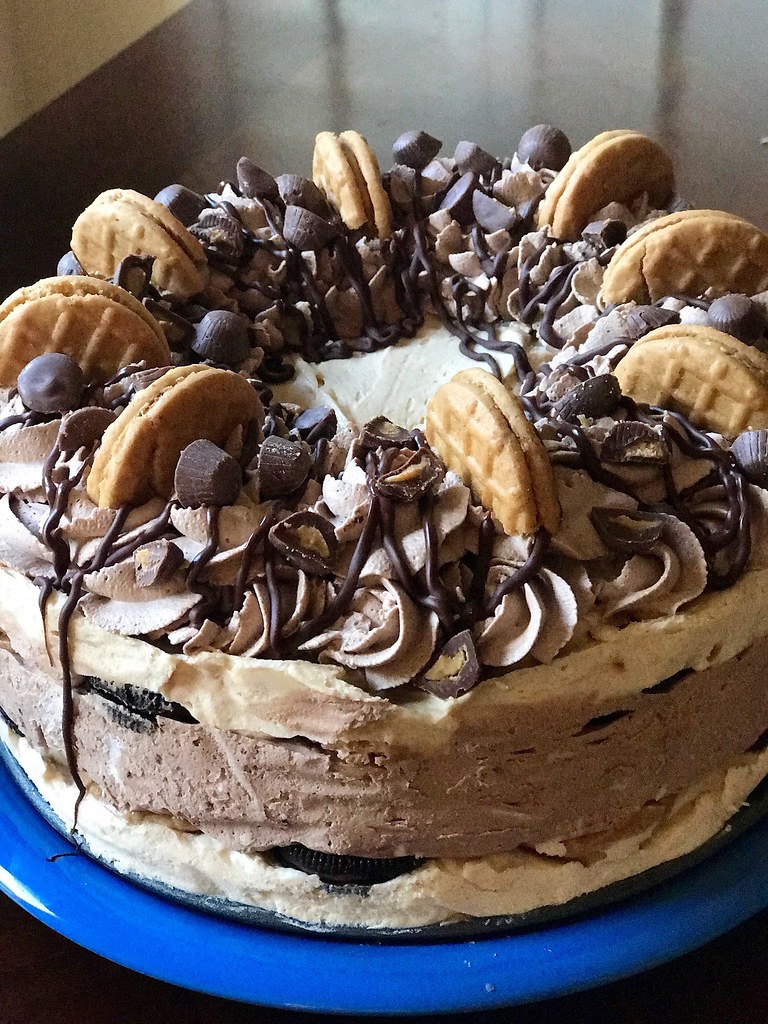 For the birthday buddies, Maya helped me to make this Peanut Butter-Oreo Chocolate Icebox Cake. 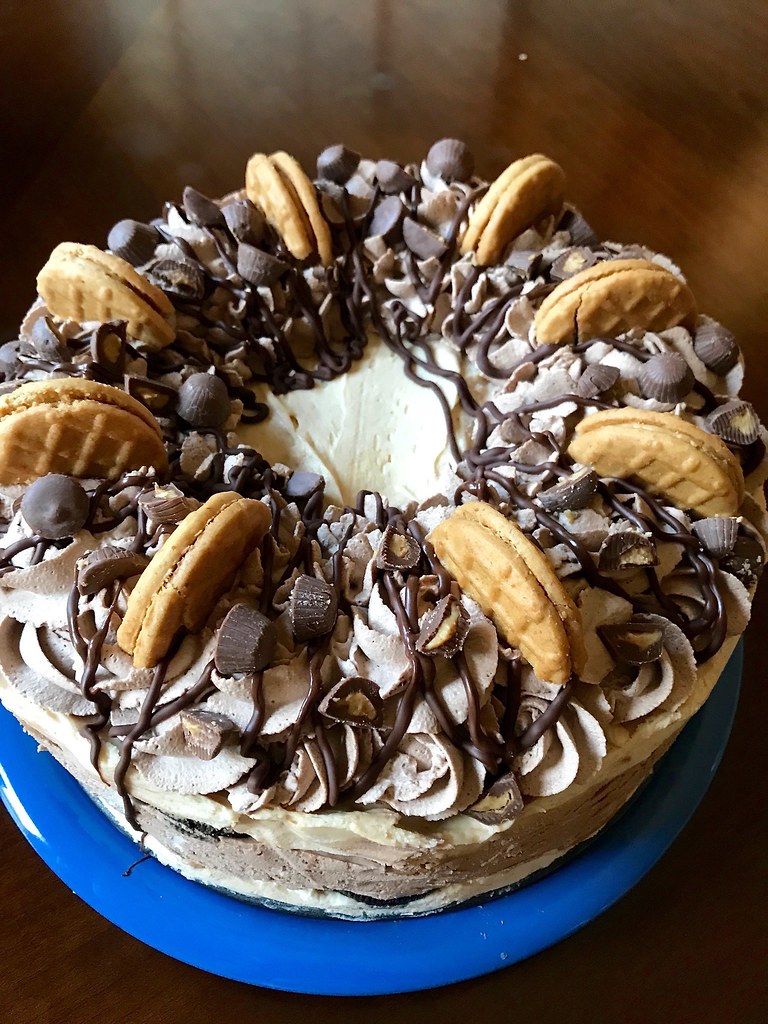 Looking at it again, it kind of looks like an ice cream cake—doesn’t it? 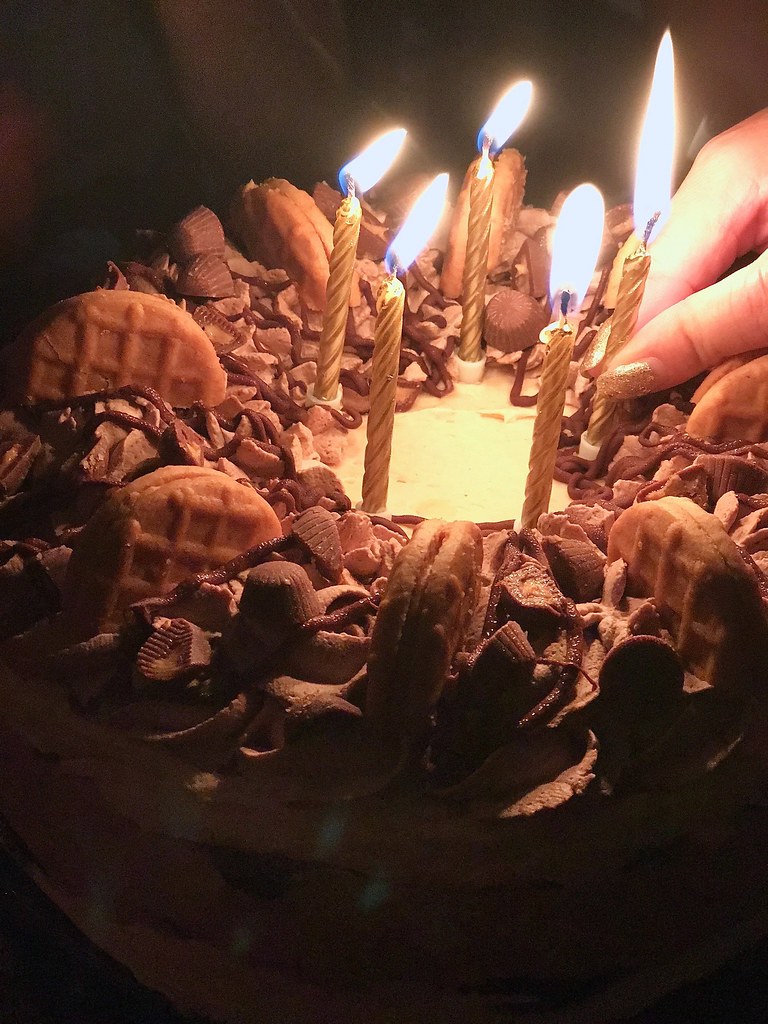 And after dinner, the antics continued because random henna sessions weren’t enough.  T busted out some new clay mask she got so we had to give it a spin, right?

What you don’t see is that we actually coerced R into letting us schmear that stuff on him too. He was less than thrilled so since it was his birthday dinner, I let him off the hook and decided not to post the pic I took of him. Plus he looked like we were rather torturing him so who wants that kind of stuff on-the-line? 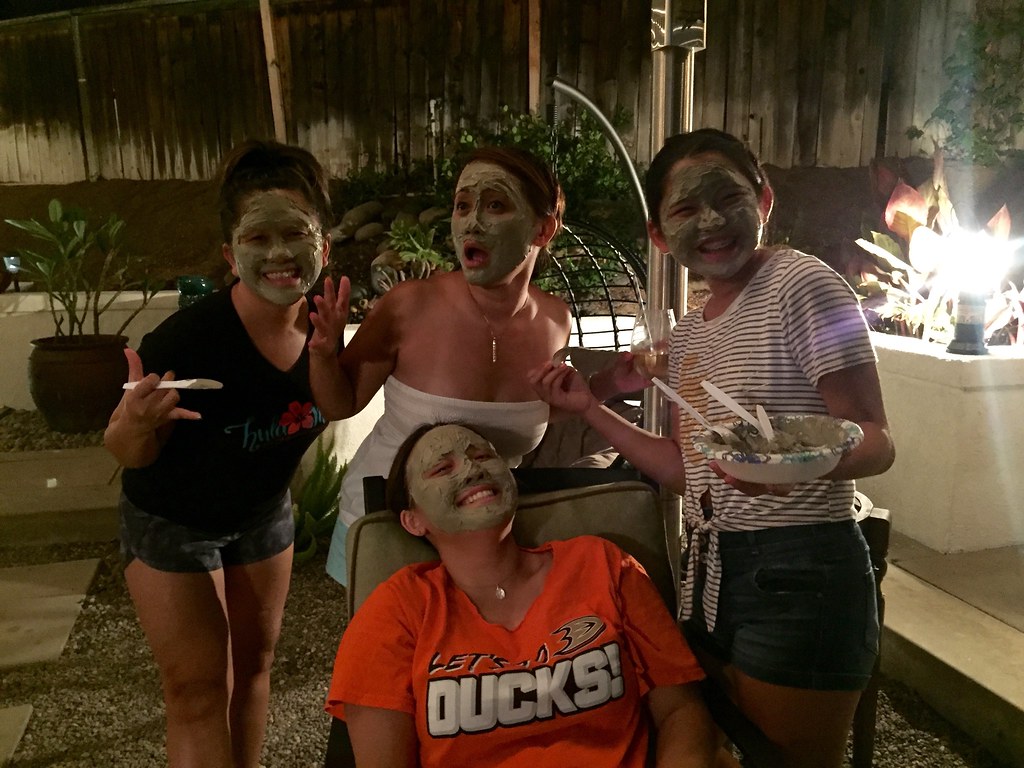 And that was it! Dragon Boat races, Polynesian dance performances, henna, clay masks, cooking, eating, drinking and a passed out a puggle.

Just another average Fam Din down in the books. ❤ 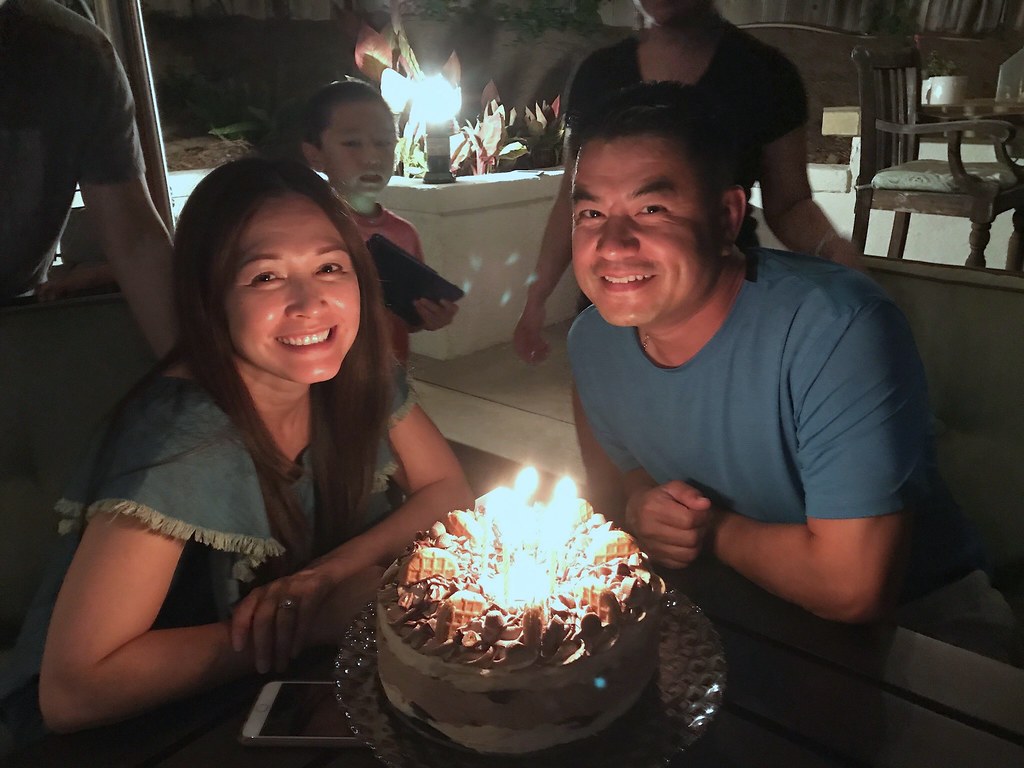 One thought on “And the Family Dinner Antics Continue….”