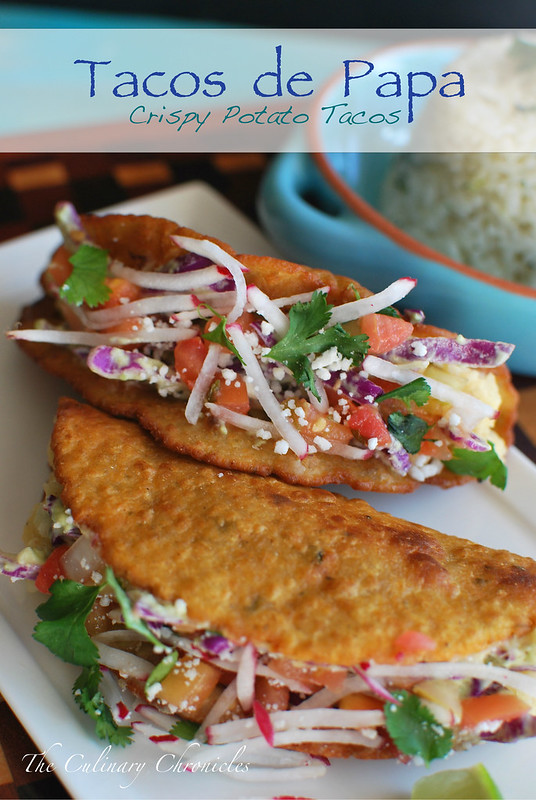 I have something spectacular for y’all to whip up for your Cinco de Mayo festivities tomorrow….

Oh yes, you know you want it.

Crispy tacos filled with a spiced, cheesy-potato concoction and then topped with all kinds of perfect fixins’! 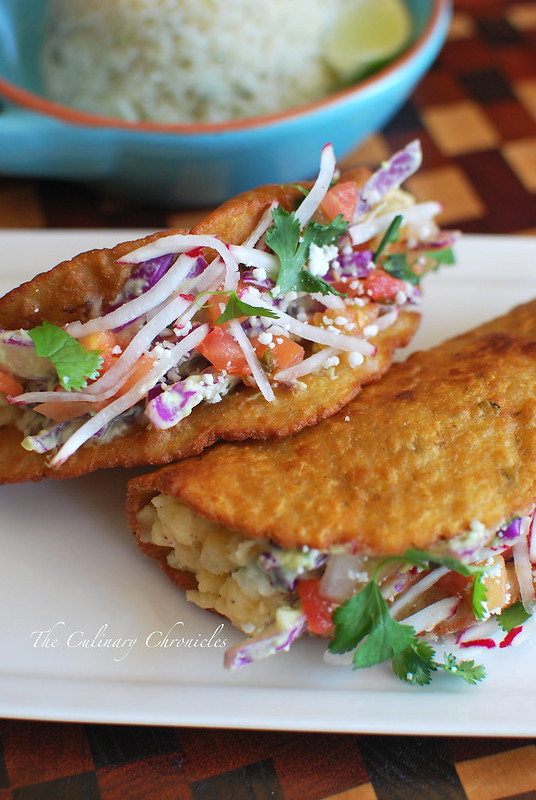 Did you really expect anything less from this Potato-Monster?

I told you I love potatoes in all forms. And when you have a love for potatoes and an obsession with tacos, things like this are just bound to make its way into my kitchen. 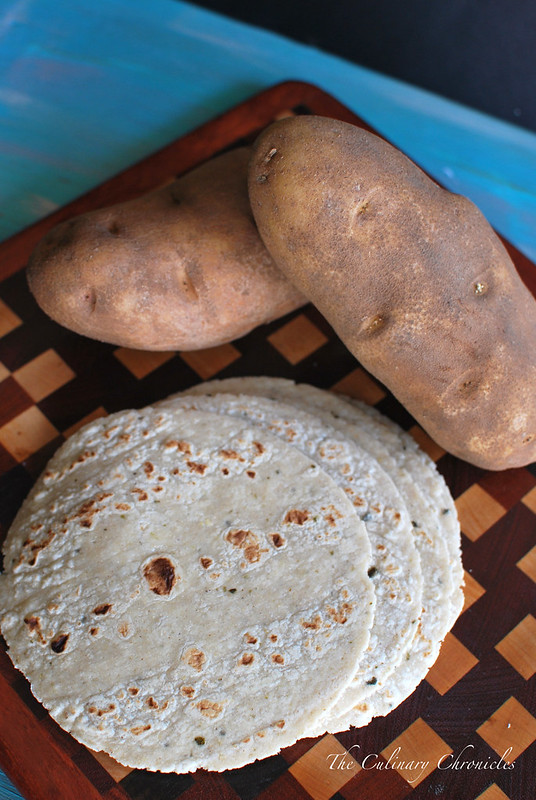 Though truthfully, the first time I tried Tacos de Papa, I wasn’t really a fan. It was a few years ago when I first moved to San Diego. I strolled into one of the nearby taquerias and saw a huge sign touting that they had the BEST Tacos de Papa around.

So of course, I had to order them. 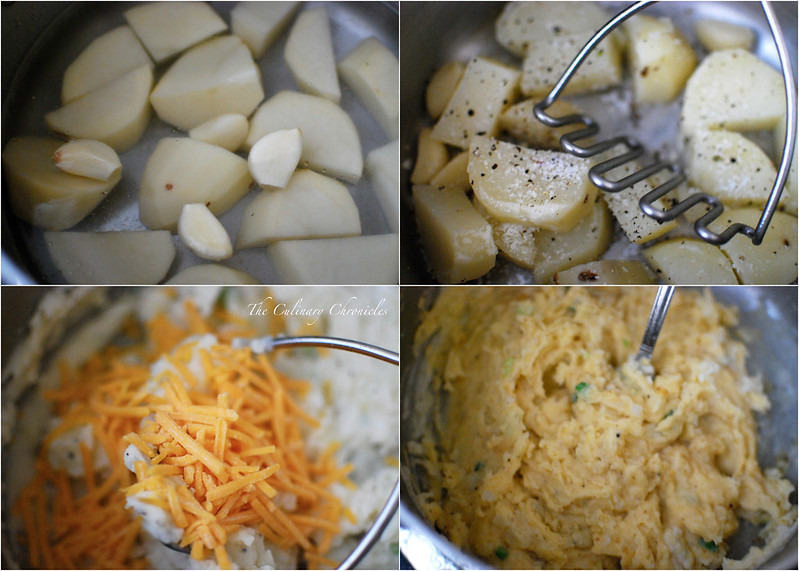 But when I took a bite….I was totally let down.

Essentially, it was just a taco filled with boiled potatoes with no spices. BLEH! How bland could you get? So naturally, I was hesitant to order them again.

Thankfully, I was at a small Mom and Pop spot a year or so later and saw a plateful of heaven being delivered to a table nearby. I was immediately struck by food envy and had to try it out. 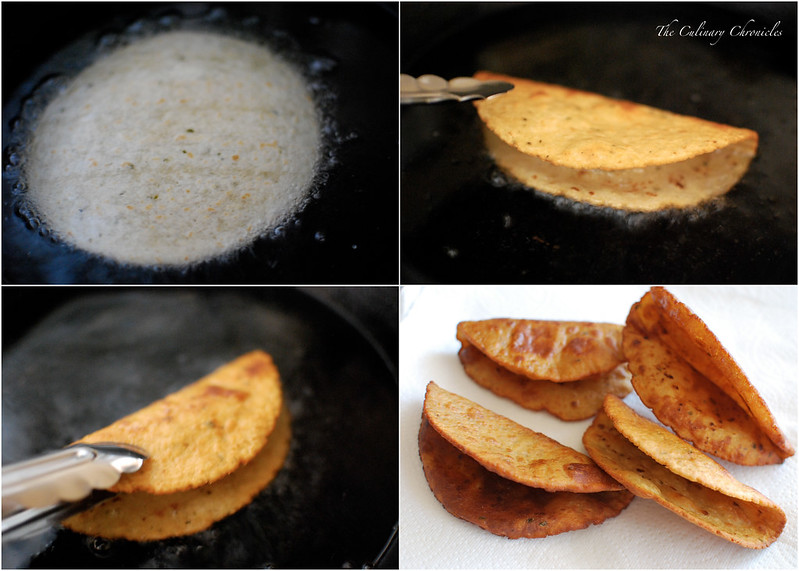 This time around, these Tacos de Papa were a whole different story. The filling were a cheesy, mashed potato with Latin spices. Now this was what I had hoped for the first time around.

And since then, I make them all of the time. 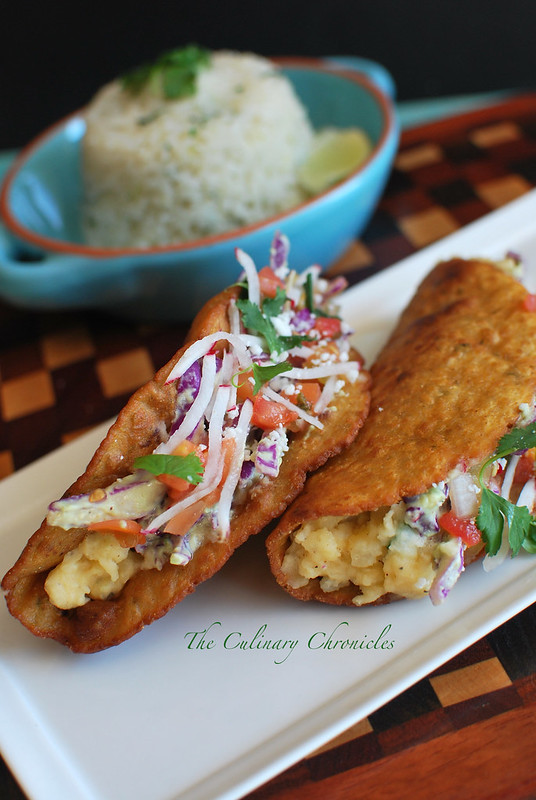 They’re actually quite easy to make and can be topped with any of your favorite fixins’. You can even doctor up leftover mashed potatoes for a quick meal. Though, I don’t know about you, but I rarely ever have leftover mashed taters.

For extra credit, I like to fry up my own crispy taco shells. They tend to have a better texture with just a little bit of extra effort. Though, store-bought is just fine as well. 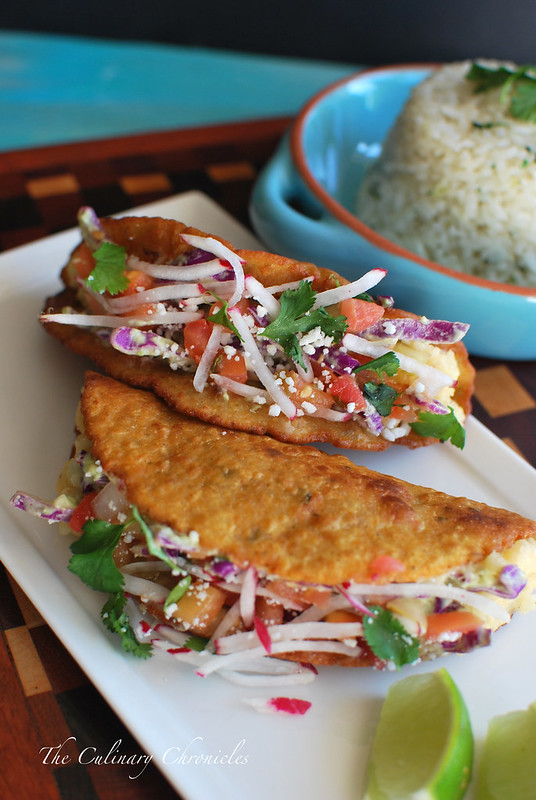 Looking for other menu ideas to go along with Tacos de Papa for your Cinco de Mayo menu? How about:

Have a Happy Cinco de Mayo!

Other:
4 crispy taco shells (store bought or homemade)
½ cup diced tomatoes
¼ cup radishes, cut into matchsticks
2 heaping tablespoons Cotija cheese
¼ cup cilantro leaves
lime wedges
hot sauce or salsa of your choice
Prepare the Avocado-Cabbage Slaw. In a blender, puree the avocado, crema, cilantro, jalapeno pepper, lime juice and agave until smooth. Season with salt and pepper. In a large bowl, toss the cabbage with a few spoonfuls of the avocado puree until lightly coated. Cover the bowl with plastic wrap and refrigerate.

Prepare the potato filling by bringing a medium sized pot of water to a boil. Add ½ tablespoon kosher salt, potatoes and garlic cloves. Lower the heat to medium. Boil the potatoes until they are tender—about 20 minutes. Drain the pot and add the cheese, spices, and crema. Using a potato masher, mash the items until they are smooth. Stir in the chopped scallions and cilantro. Season with additional salt and black pepper as needed. Set aside.

If you’re frying your own taco shells, pour vegetable oil into a deep pan until it is about ½ an inch deep. Heat the oil to medium Taking one tortilla at a time, fry on each side. Once it becomes golden, take tongs to fold the tortilla in half and hold it in place until it becomes crispy and takes on the shape of a taco. Fry until golden brown and drain on a plate covered with paper towels. Continue until all the shells have been made.

Assemble the tacos. Take one crispy shell and fill it with a quarter of the potato mash. Top with spoonfuls of the Avocado-Cabbage Slaw. Top with the tomatoes, radishes, cilantro and a sprinkle of the Cotija cheese. Continue until all the tacos have been assembled and serve with lime wedges, pico de gallo, hot sauce, etc.